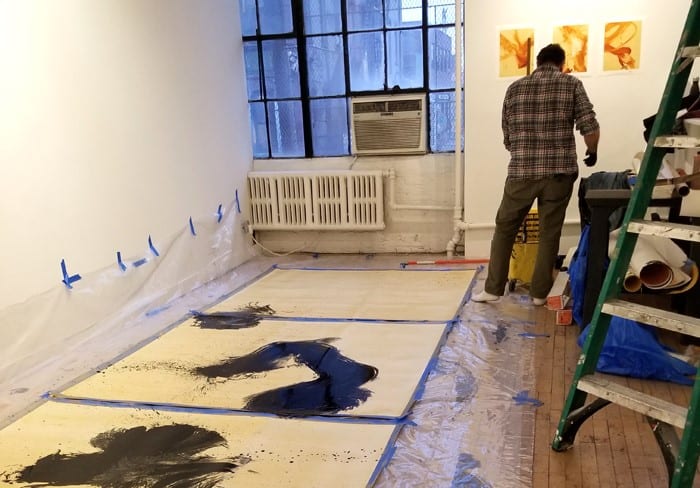 Deep in the heart of Bushwick, Michael David’s residencies offer an intense experience that may take your art to new levels. 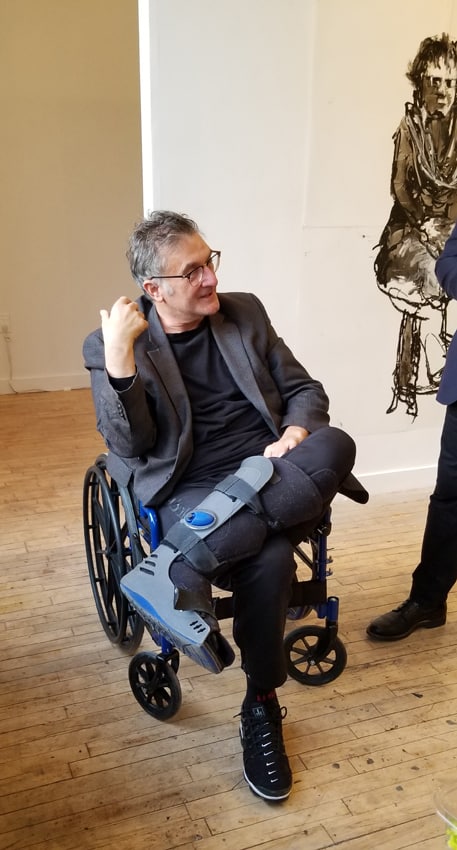 Michael David before his cast came off

“A cross between Black Mountain and Project Runway” is the way Michael David sums up the residencies he’s been sponsoring about four times a year for six to eight artists in the storied Bushwick neighborhood, locus of countless studios and cutting-edge galleries. It’s an experience markedly different from the pastoral retreats that allow you to contemplate and regenerate in an idyllic rural setting. “We’re in the middle of Brooklyn,” says David. “This is not a bucolic place where you’re left alone.”

David, who was the subject of a podcast interview on the site in the summer of 2017, has a long and formidable career as a pioneer in encaustic and an enterprising dealer. The Michael David Residencies grow out of an experiment known as the Fine Arts Atelier, which David launched in Atlanta, GA, in 2011.  Described as a “painting hothouse,” the project evolved over three years from straightforward workshops to a more immersive experience for the participants, who were predominantly women in their 40s through 60s.

Now David is working with smaller groups who share a large open studio on Bogart Street along with the sorts of swapping of experience and concepts that’s bound to happen when artists work side by side, day after day. For ten days, “there’s a tremendous sharing about life and art and work,” he says. 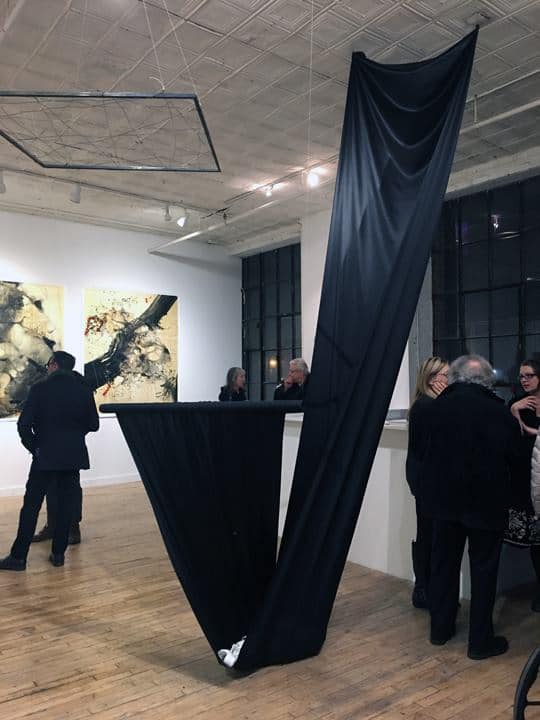 Each of the residencies has a theme, such as the “Exquisite Corpse” and “Folded,” which evolved out of discussions with the participants. The most recent took place over Art Fair Week in New York in early March and developed around the topic of “Hurt,” a subject the wheelchair-bound artist, who broke his leg last year, explored this winter during discussions with his son. He challenged the artist participants in this recent workshop to pick the work of another artist, be it “painting, sculpture, literature, film, music, that already relates deeply to the essence of who you are, and create of work in your own voice based on that.” (For more about this, see David’s explanation on the website here.) 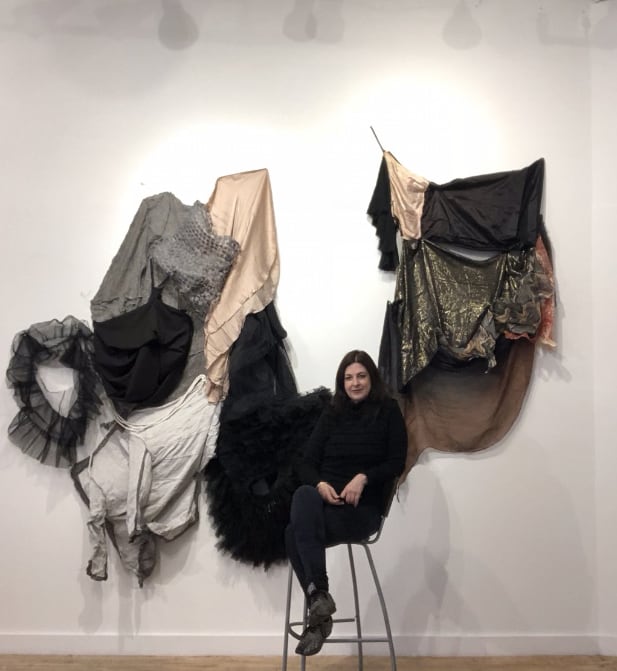 Deborah Kapoor with works from a previous residency

Deborah Kapoor, an artist who works in evocative swoops and crushes of fabric, was part of the “Exquisite Corpse” and “Folded” residencies and for the theme of “Hurt” developed a narrative about her mother, who is elderly and ill, and her son, who is still young enough to need the attention of a mother. Of her installation “The Pull,” she remarks: “Within this wall piece are garments I have worn, literally ‘wearing’ the role of mother and daughter, as my body is in a gravitational pull in two directions. I am drawn in by a mother who needs care and a son, not yet a man. It’s a dance between two ends of the spectrum, and I can’t give up either.”

Christopher Rico, another veteran of the most recent residency, explains that although his painting is rigorously and lyrically abstract, he has for much of his adult life been working through the “spiritual trauma” he grew up with as the son of fundamentalist Christian parents. “I’ve felt myself digging down into the imagery to the point where I have to make it,” he says. “For most of my career I’ve wanted to make things that are spiritual and powerful. Working with Michael helped a great deal.” 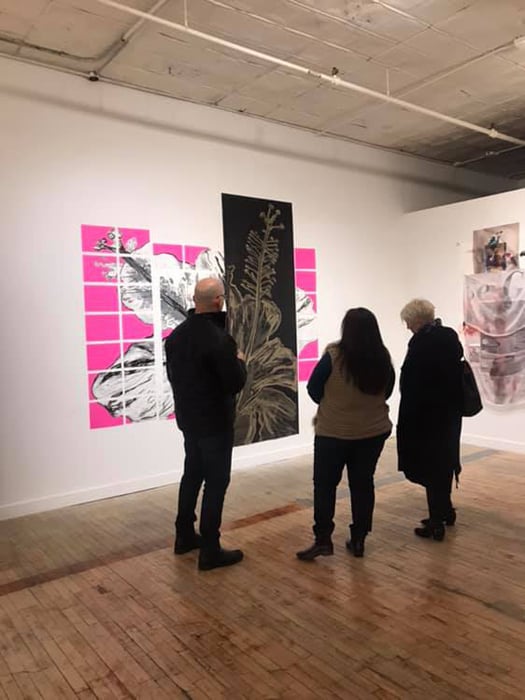 At the opening, with works by Pilar Ulribe (left) and Francesca Schwartz (right)

Aside from taking place in one of the epicenters of the New York art world, the residencies are unusual in other ways. David works closely with artists for the program via Skype and/or phone for at least two hour-long sessions, with updates individually and for the group, prior to arrival in Brooklyn. “He talks with the artists about how they can build on what they’re doing,” says Bonny Leibowitz, the Dallas-based artist who has taken over as the Michael David residency director. “It was intense,” says Rico of his recent experience, “but it revised my ideas of the way people can work together and it showed me how to work as part of a cohort.” 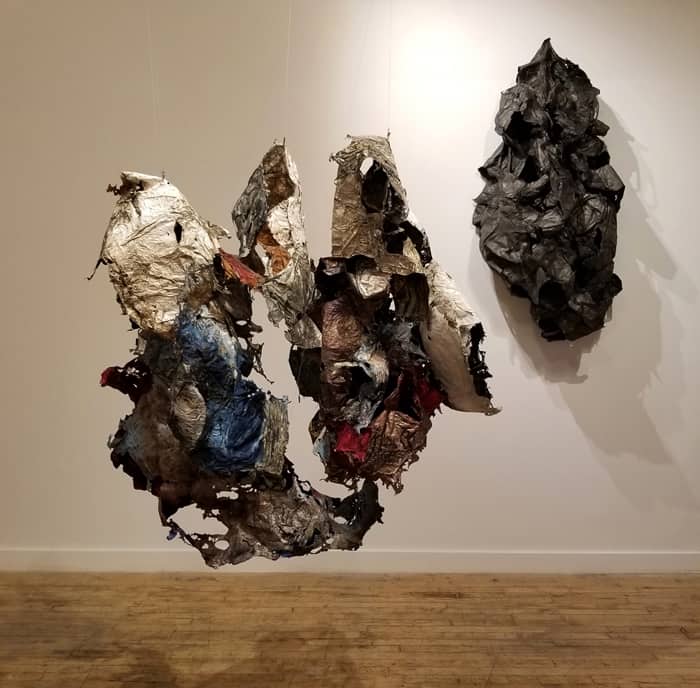 The absence of individual studios also means that “by the end of the residency, all the works seem to speak to on another,” adds Leibowitz. “Michael brings everyone together to look and compare notes.” David adds that the “process back and forth accelerates a kind of dialogue that makes the work fuller for everyone. Even when mediums are completely different, there’s an underlying critical thinking can be strengthened through understanding one another’s processes.”

At the end there is a three-day exhibition, perhaps not such an unusual occurrence for any residency, but David believes the show “forces people in some ways to clarify their critical thinking about their work.” Rico says he felt his paintings took a “quantum leap” and the ten days in Bushwick allowed him to take the work “to a different level.” 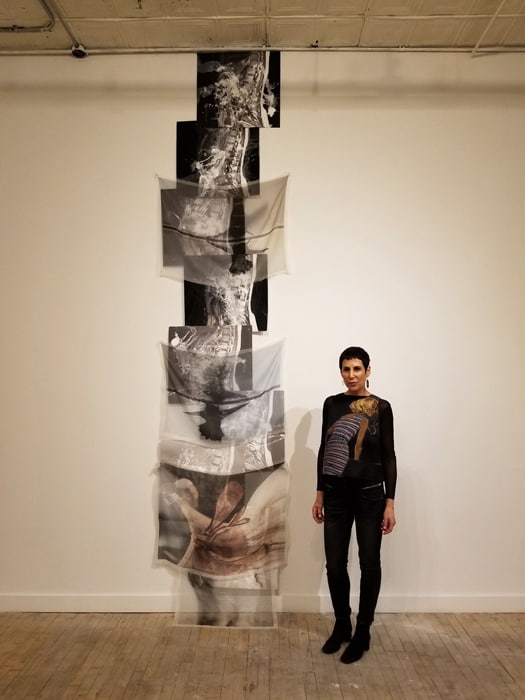 Francesca Schwartz and her installation at the “Hurt” opening

Aside from the intense studio time for the “Hurt” residency (Rico says he was spending 10 to 12 hours a day in the studio), there were plenty of opportunities to explore New York during Art Fair week—when the Armory Show, Art on Paper, the Art Show, and other satellite exhibitions are in full swing. There are also visits from critics, such as Paul d’Agostino, who makes at least one appearance, and David is hoping to pull in other critics in the future. In the past, the group has also traveled to Dia Beacon in upstate New York and for the summer residency there will be trips to Mass MoCA in North Adams, MA. Artists also “sit down and have dinner together and talk about our lives and career paths,” says David.

As to who is chosen for this intensive, immersive, and possibly mind-bending experience, David says that one criterion is “whether they are open to learning, whether I can get along with them on a personal level, whether it’s a good fit for both of us, and whether the artists would benefit from working with me and in a group.” On the website, he adds, “The residencies…which have been the most successful were based on conversations I had with each participant first, finding common threads, passing it through my own passion, then creating a loose architecture a structure and theme for each participant to interpret and to run with. I then shared everyone’s emails in the hope each participant would share their thoughts with each other before the residency. One of the aspects of the magic of this program is the support and collaboration between the artists involved.” 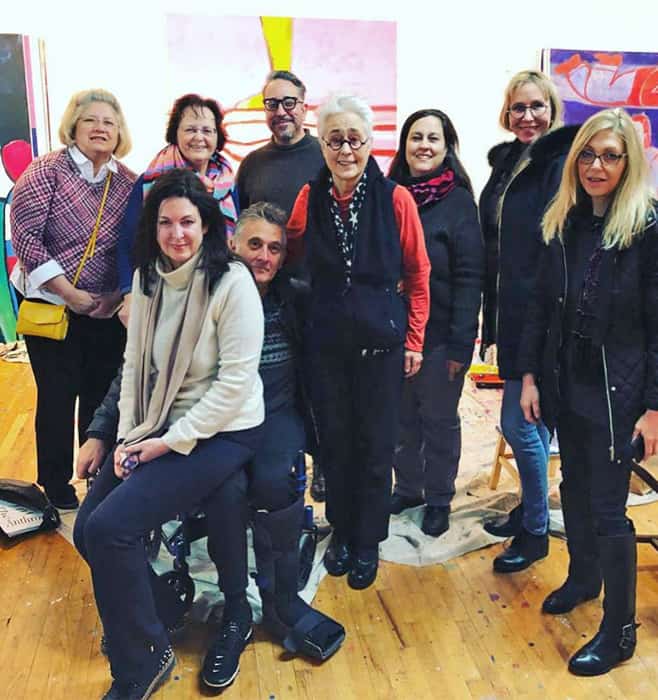 The website also stresses that those admitted “will be selected because their work is already at a level ready to exhibit.” Admission is, of course, also decided through a digital portfolio and website review. (For more details, start here and cruise around the Michael David site.)

The fee for the upcoming summer residency (July 14-28) is $2950, but “there is some flexibility on price on a case-by-case basis, and we are starting a scholarship program next year,” David says. There is no fixed abode for all the residents, but participants find lodging with friends, family, and at Airbnb sites throughout the city (there are many in Bushwick). Those accepted for the residency are expected to bring their own supplies and hanging systems (tables, chairs, and some tools are on hand). A full packet of info with details about submission, pricing and timeline are available by writing to Leibowitz at bonny@bonnyleibowitz.com. The deadline for applications is May 25.

Some of the artists Michael David has supported through residencies and through the gallery, like Brenda Goodman, have gone on to great critical acclaim and shows with major dealers. “This is a nontraditional sort of place,” says David. “It’s about art and community.”

Top: Christopher Rico at work in the Bushwick studio