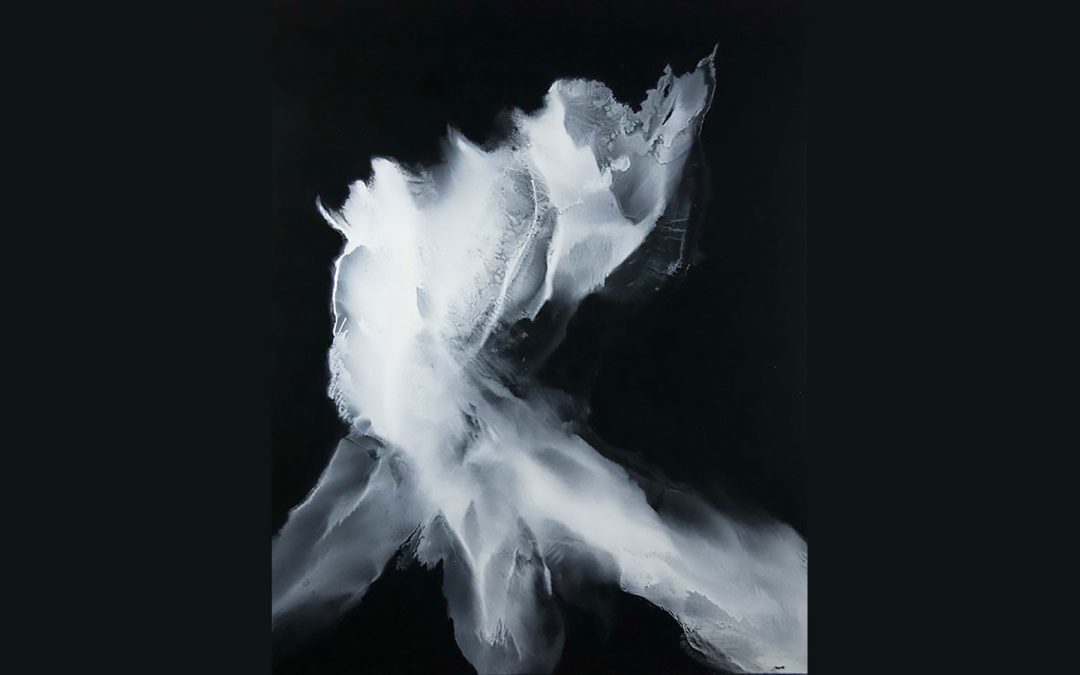 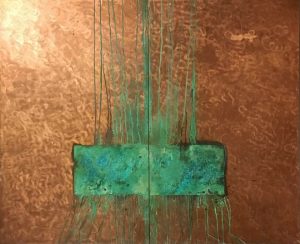 Although they are not overtly religious, Christopher Rico hopes his subtly explosive black and white paintings convey a spiritual quality—“whatever that means,” the soft-spoken painter hastens to add in conversation. The son of a Lieutenant Colonel in the Air Force, Rico grew up on military bases on both coasts and was raised in a strict fundamentalist branch of Christianity, one that did not allow any sort of imagery in the church. When he gave up on the faith, in his early teens, he says he “turned off religion” for years.. 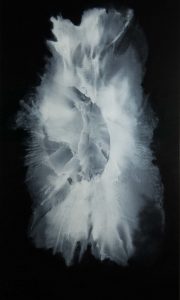 Nonetheless, on travels to Europe when he was in his 20s, he was impressed with the powers of sacred art and architecture—the cathedrals and the formidable painters of the Renaissance and Baroque periods, especially Caravaggio. “I found that visual language could have qualities the written word did not.” It was a revelation reinforced by seeing Barnett Newman’s Stations of the Cross, along with works by Mark Rothko and Clyfford Still at the National Gallery in Washington, DC. Later, visiting Turkey in 2008, he was also impressed with “the intentional abstraction of the Byzantine,” he says. “Hagia Sofia probably stands out as my singular ‘religious’ experience in a place of worship.”

But it would be several decades before Rico had the idea of exploring sacred themes in a contemporary idiom. He dropped out of the University of Memphis after his sophomore year and “hung out in San Diego, riding motorcycles, working in stores, doing odd jobs.” A childhood passion for drawing didn’t return until he found himself in Austin, TX, on his way to Mexico “with no particular goal in mind,” and it was then that he bought sketchbooks and worked on a collaborative piece with a roommate, realizing “this is what I really like to do.” 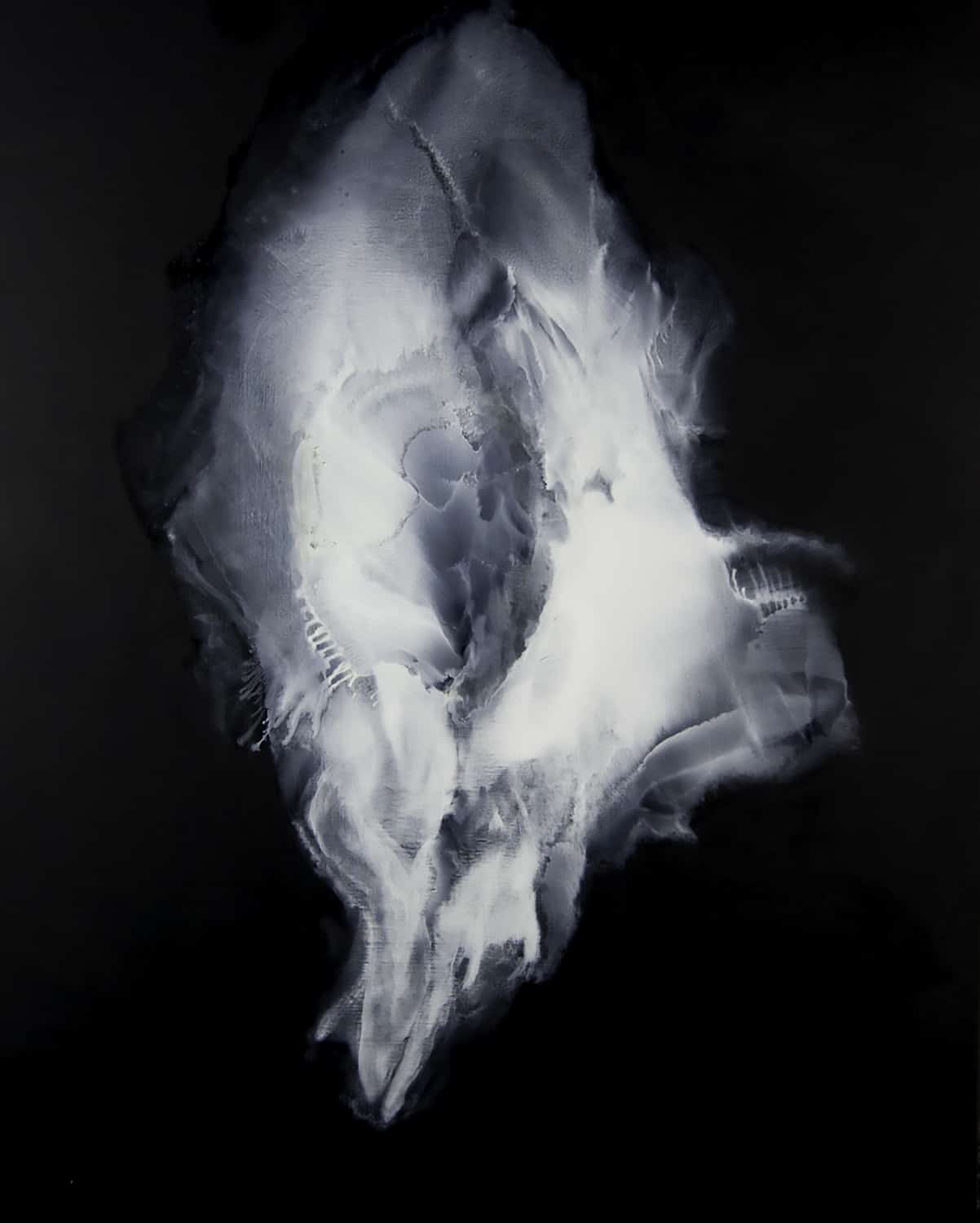 Eventually landing in Memphis, TN, because his parents were elderly and lived in nearby Jacksonville, Rico rented a studio, saying simply, “I thought that’s what artists did.” (He also finished his undergraduate degree from the University of Memphis in 1995.) “I had it in mind that I wanted to be a sculptor,” he says, “so I started using scrap metal from the industrial neighborhood around me. I could also get all sorts of chemicals and played with oxidation techniques.” The works were smart enough to attract the attention of a dealer in Memphis, but the artist believes the gallery may have been equally impressed by his computer—one of the first laptops they had seen on which an artist could store and pull up images.

In Memphis, he also worked asa set designer for the theater but though it provided opportunities to envision things on a different scale, it was not a profession he chose to pursue. Rico describes himself as “still in that place where I was trying to decide if I was a sculptor or a painter,” when one of his professors at the university definitively pronounced, “You’re a painter.”

The next stop for Rico and his wife, Miriam Ragland, was Seattle, WA, his first experience of a real art community. With friends, he acquired 45,000 square feet of warehouse space and converted those to studios. He was working restaurant jobs at night and building studios by day when his wife, a choreographer and theater director, got the call to a tenure-track position at Presbyterian College in Clinton, SC. And so, once more to a new part of the world. He had previously made applications to grad school, believing an MFA was the ticket to a sharpened focus, and got into the Savannah College of Art and Design, but there was little financial support and the commute would have proved arduous. 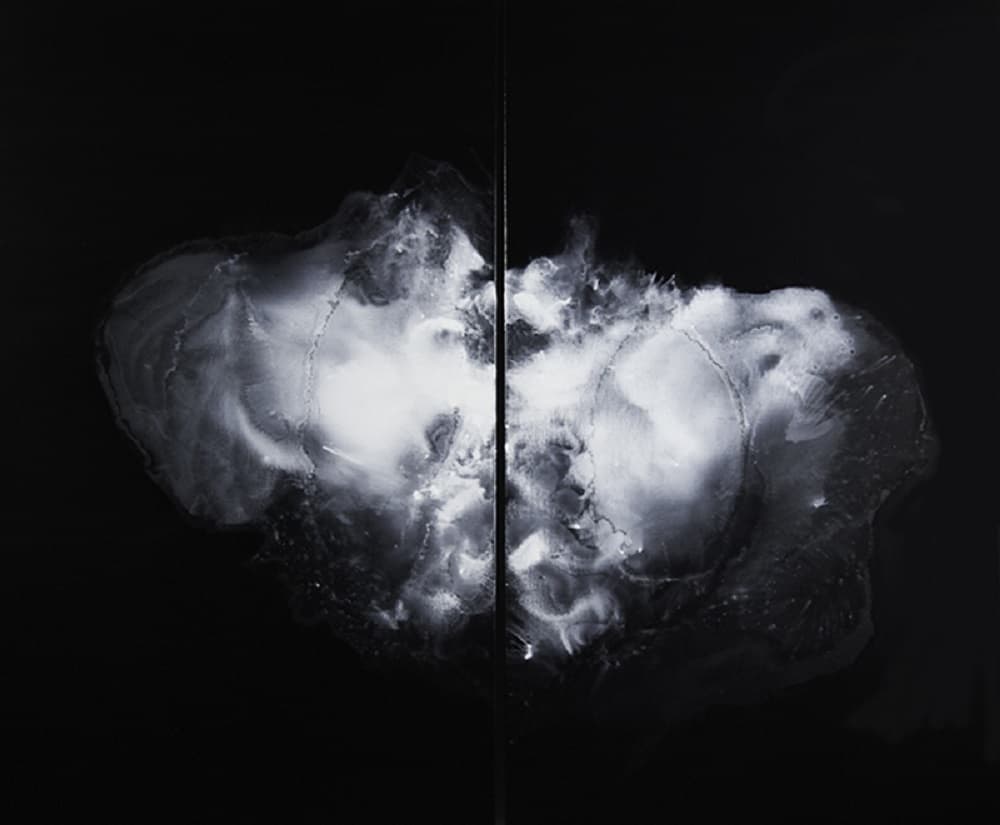 Rico went to an accountant who advised him to take out a small-business loan, using paintings as collateral. The money allowed him to rent space and hunker down for long enough to get his work off the ground. He had heard in an interview with John Baldessari words to the effect that “if you want to be a painter, stay in your studio until you have a comprehensive body of work.” He calls that time a “sort of a Hans Hofmann period for me.” In reading writings by Robert Motherwell, he also ran across the advice to strip away any distractions and allow a freer association for the viewer. By 2008, he describes his work as “geometrical abstractions” verging on Color Field. “I kept experimenting with formlessness, without any perceivable composition,” he says. “By 2008-09, I was using burnt umber on a very wet surface.”

And then he left the paintings alone. “I’m stubborn about a process where I’m trying to get rid of the idea, but if it persists, I’ll pursue it.” 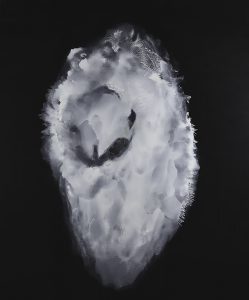 Rico admits it sounds corny, but at some point in 2011, he had a dream of a black-and-white painting and “then I just started doing it.” First working small, on five- by seven-inch postcards, he then moved on to black vellum paper, using white paint. “They had a certain X-ray quality,” he recalls. “They reminded me of paranormal photography. And I realized I wanted to go larger and started to experiment with a very grand size and then I scaled back.”

He now works with stretched canvas on the horizontal, either on the floor or on sawhorses. “I got an air compressor, and I use an air gun. I get the canvas super-wet and then rework it in sections. All the paintings have a gestural quality, the feel of a single spontaneous event, but they are actually finished over a period of weeks and months. I’ve gotten to the point where I can manipulate the surface—it’s become a vernacular for me. I know certain phrases I can pull out of it, certain visual moments.”

In the last few years Rico has also connected with a new community in the New York area, mostly through social media, and travels north every three months or so to visit art fairs and shows in New York (he’s now represented online by Lyons Wier Gallery in Chelsea). He recently relocated with his family, including 12-year-old twin daughters, to Greenville, SC. “I can honestly say that becoming a father was one of the most significant experiences that contributed to my art career becoming focused in the way it is today,” he admits. “I painted all the time with my daughters when they were small, and it completely changed the way I thought about painting in a formal sense. The shift of understanding that life is about things larger than myself, I hope, lent gravitas and perhaps a certain universality to the work.”

Of his recent paintings, made using only Mars black and Titanium white, he says, “I like it that they seem to have a light source. I’ve been doing these for about six years, a relatively long time, and still I feel there’s something to explore and I’m learning more about the process itself. It’s fun in the sense that I’ve mastered a vocabulary, but I’m also always surprised.” 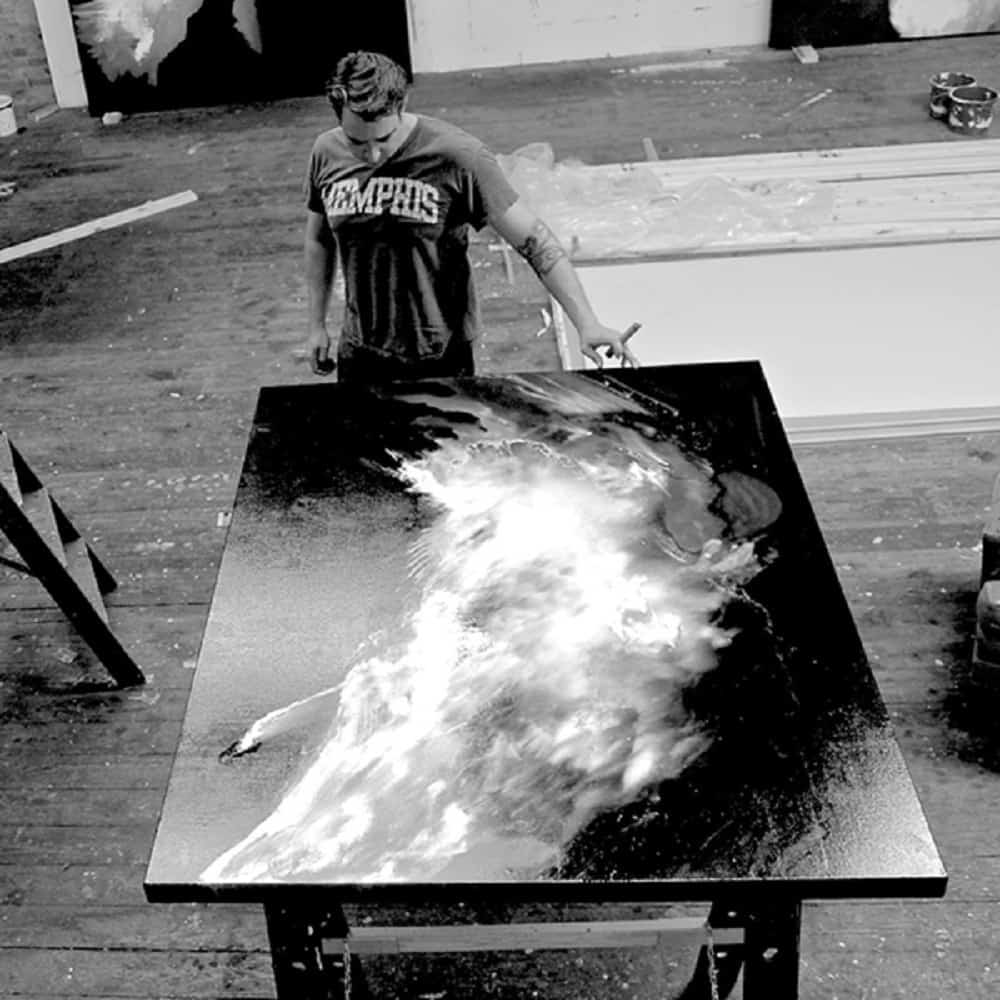 Christopher Rico in his studio in Clinton, SC