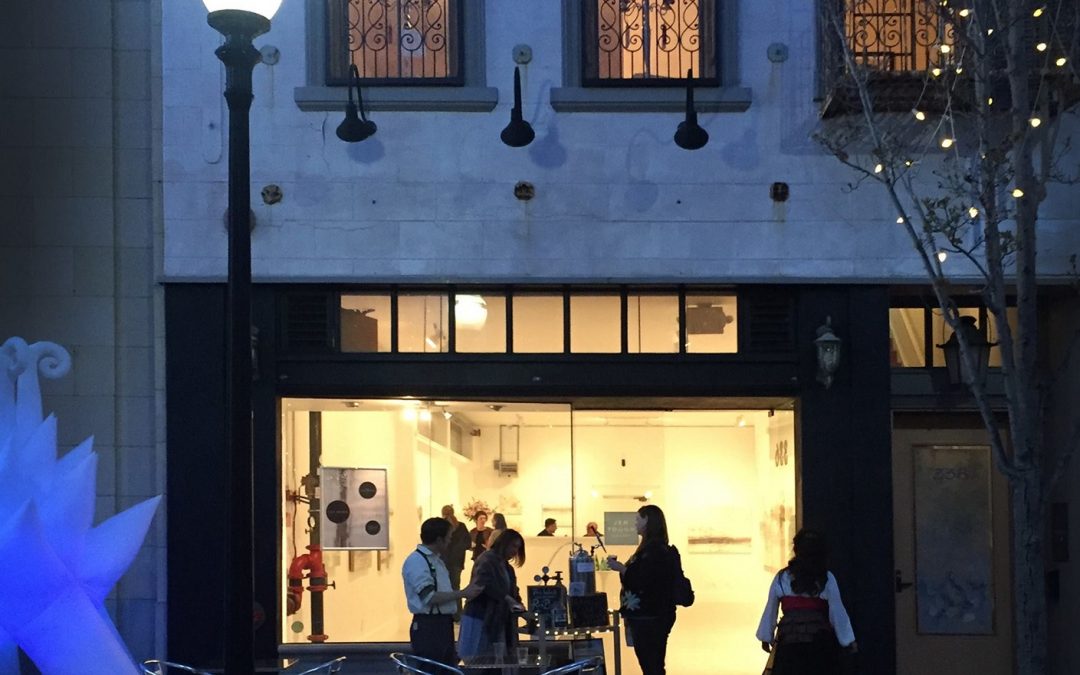 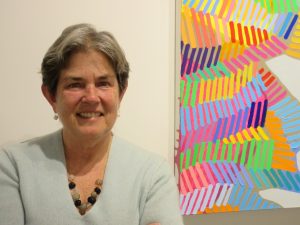 Kathryn Markel with a work by Martina Nehrling

Dealers Tell Us What They Look for in Representing Someone New

What makes a gallery decide to take on a new artist? To make a long- or short-term commitment? What goes through a dealer’s head when she is looking at (or looking for) art to show, either in solo or group exhibitions?

First understand that galleries, like artists, usually have very distinct sensibilities. Study their websites and you will generally discern a certain common ground among the artists on the roster. Obvious ones are a gallery like Forum, in New York, which shows only high-end realist work (and is probably not looking at new artists, as you can often see on a dealer’s contact page). Or Edwynn Houk, which represents mostly blue-chip photographers, like Sally Mann and Joel Meyerowitz. Others are more subtle, but survey the artists represented and you should get a better idea of where a dealer’s tastes lie.

“The common thread to my artists is that the narrative is not overwhelming. They show a little with a lot, and there’s a strong historical context that runs within and artist’s body of work. But it has to bring us back to what’s happening now,” says Liliana Bloch, who shows a diverse roster of artists at her gallery in Dallas. They work in all mediums and idioms—from photography to paint on panels, from abstraction to realism—but all have a certain edgy quality.

Kathryn Markel in New York also shows a mix of talent, but in cruising her site, you’ll notice that her bent, whether it’s abstraction or landscape or sculpture, tends to be on the conservative side. But, she says, “it’s amazing to me how many artists—photographers, for instance, or figurative painters—send me examples of their work. And I don’t show either.” 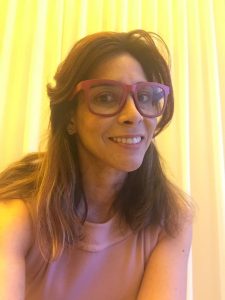 A gallerist’s particular sensibility is often formed early on, and it helps to understand where she’s coming from. Bloch, for instance, was once director of the McKinney Contemporary in Dallas. “My mission was to support experimentation among all kinds of artists,” she says, “and I met a few of the artists I’m still working with. It takes a long time for me to develop a relationship.”

Karlyn Benson, director of the Matteawan Gallery in Beacon, NY, who shows a number of Vasari21 members (including Krista Svalbonas and Lorrie Fredette), lived in Brooklyn for a time and says her tastes began to form there. “After four years, you know what your sensibility is. I know it when I see it.” Most of her artists, she adds, come from within a 200-mile radius of the city.

As for the more specific qualities, Bloch says she “looks for craftmanship and coherence. I do have artists who are really chameleons, but I can see consistency in whatever statement they’re making.” Jim Robischon of Robischon Gallery in Denver says he looks for an “artist who knows about the past, and knows about the artists who came before him within a specific genre.” He is partial to “someone who bears the torch in a new and interesting way” and adds that he gravitates to art “that might be a bit harsh. It needs to have a certain dissonance to make it art. And I look for a long-term investigation ”on the part of individual artists.” 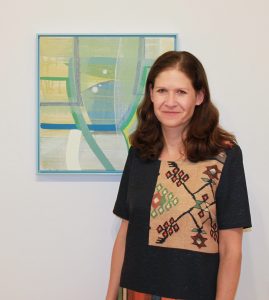 Karlyn Benson and a painting by Ky Anderson

Where Do Galleries Find Their Artists?

That may depend on where a venue happens to be in its evolution. Established galleries are less likely to be out there actively, while a younger gallery may be more aggressive When Michael David was first establishing Life on Mars Gallery in Bushwick a few years ago (the gallery has since evolved into David&Schweitzer Contemporary at the same address), he says he was much more pro-active. “We were out there looking, in that incarnation, when we were first building the gallery and establishing what we were about. If someone I respected said, ‘Have a look,’ I would be there.”

Other dealers, no matter the age of the gallery, still regularly cruise the art fairs and sometimes end up showing artists they see there. Karlyn Benson first spotted Ky Anderson (an artist whose show just closed on October 1) at Pulse and Art on Paper. “I also saw her work in a gallery on the Lower East Side, and probably noticed her in about five different places in all over a three-year period. I thought it was great work, and after talking to her I had a good feeling about her.”

But the number-one source for engaging a dealer’s attention is a recommendation from another artist affiliated with the gallery (or well established elsewhere), a collector, or a curator. Michael David says he discovered Brenda Goodman, whose solo at David&Schweitzer just ended, was recommended by Joan Snyder. “Over the decades, Brenda has built up a loyal following,” says David, “and that impressed me—the tremendous number of people who love and respect her work.” 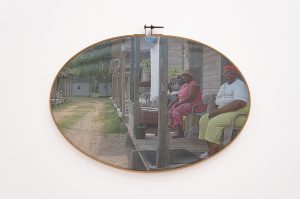 “A lot of artists come from the suggestions from artists I have now,” says Bloch. “When they tell me to look, I will look. When the director of the University of Texas, Dallas, residency program said I should see the work of Shawn Mayer, I did.” He’s now on the Bloch roster. “There’s a handful of people I trust—colleagues and curators—whose opinions I always value.”

“Make sure that all of your friends are your ambassadors,” says Hal Bromm of the Hal Bromm Gallery in New York. “Make sure that they know you would like them to promote your work, and that can lead to good things happening.” He cites the example of Vasari21 member Laura Gurton, who was introduced to Bromm by Vince Pomilio, another artist who shows regularly at the gallery; both were included in the summer group show.

A group show, in fact, is often where dealers like to “try out” an artist. It’s a noncommittal way of determining how well the gallery and artist work together, and it’s a great chance for the artist to get her foot in the door.

What Can You Do?

Many dealers say they simply do not have the time to respond to emails with links to websites; others say they will indeed look in due time. Markel pays attention to the online solicitations that come her way, and Jen Tough of the gallery by the same name in Vallejo, CA, says, “People will send an email and I’ll be intrigued but they don’t follow up. Wait a couple of weeks or a month. Let me know that you’re out there and you’re interested.” If you do the email approach, though, be sure to embed an image of two in the text.

Tough says she does portfolio reviews for the San Francisco Artists Network, which offers one-on-one critiques. She has not yet met anyone she wants to represent, “but I think it’s a great way to get to know a gallery owner face to face.” 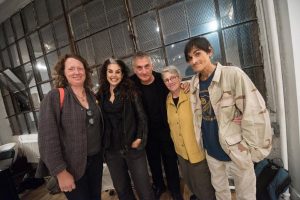 Studio visits seem to be turning into a thing of the past, perhaps because it’s so much easier to study work on the Internet or Instagram or even Facebook to get a sense of what an artist is about. “I’ve done them, and found that it gets me nowhere,” says Robischon. Yet others will take the time and find it important. “When I do a studio visit, all I really look for is someone whose practice is committed and is working like their life is on the line. When I see that, then I say maybe this is someone to whom I can also be totally committed, putting my time and creative capital on the line.”

“I urge people to come to our openings and say hello, come to the artist talks, if they really want to be involved,” says Tough.

Above all, don’t walk into a gallery with examples of your work. “It’s not pleasant for anyone,” Tough believes. “And I hate it. I had one guy who wanted me to come out to his car and look at work, and he wasn’t very polite about it. You wouldn’t behave that way with your accountant or dentist.” Other frowned-upon tactics include calling several times a day, even if the gallery does represent you. 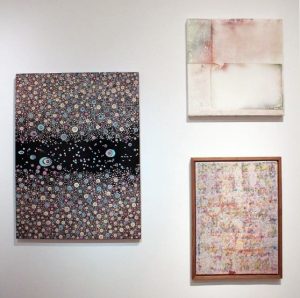 Many dealers appreciate an up-to-date and easily navigable website and an active presence on social media,. “There is so much ‘chatter’ in the world that it’s next to impossible to break in and be noticed, especially in my case as a new gallery,” advises Tough. “When an artist has a nicely sized following on social media, the gallery already has an established fan base to work with. It helps get the word out about exhibitions and events involving the arts, and it shows the artist is serious about self-promotion (and hopefully sales) through hard work. It lets me know that art is not just a hobby or a fleeting fancy.”

“I look for a responsible individual who takes care of her own business,” adds David, “one who doesn’t ask me to take charge of her whole career.”

Over and over, dealers said they look for someone who is courteous and easy to work with. “I try to go for people who are nice,” says Benson. “It’s important to find artists you want to work with.”

“There has to be good chemistry between us,” Bloch believes. “I love good manners, and there has to be an element of camaraderie. If someone seems unreasonable or difficult, I don’t care how talented she is or how high in the ranks. Everybody’s replaceable. Everybody.”