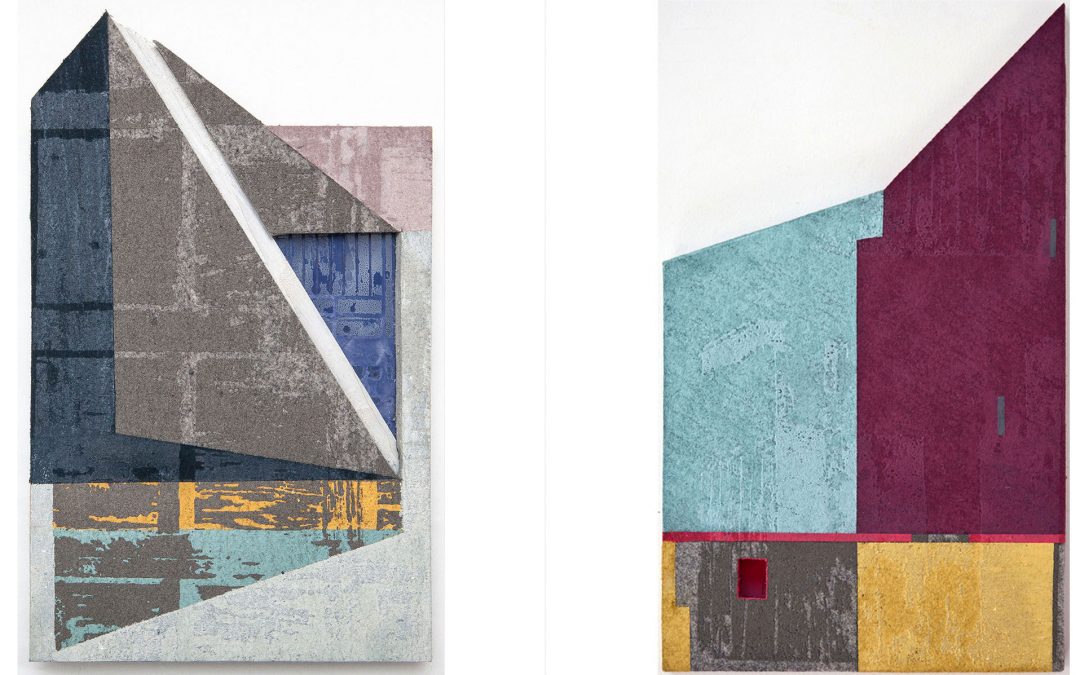 By the time she was in high school, Krista Svalbonas knew that photography would figure importantly in her future work as an artist. Born in King of Prussia, PA, and raised mostly in nearby Bethlehem, she recalls taking every art class she could in high school. “I had basically exhausted everything that was available—painting, drawing, ceramics. I took photography because that was the only thing left. I loved the ability to carry your studio with you, and loved going into a dark room for a hands-on process.” She was sufficiently devoted that her mother set up a small dark room in a cupboard underneath the stairs in her house. “I couldn’t stand in there, but I could roll around on a little chair. It was all very Harry Potter-ish.”

Later, enrolled at Syracuse University, she pursued two different programs: one strictly art-based photography, the other a commercial photo course (in part to appease parents concerned about her having a viable career). “I was interested in combining photography with other mediums, like ceramics,” she says. “Even though I was a photo major, I took classes in painting and sculpture.” 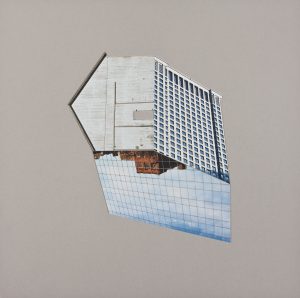 As an undergraduate, Svalbonas had determined on a course of mixing mediums, but first came a few years in the advertising world in New York, where she worked her way up through the ranks to become an art director. When the last firm she worked for closed, she was ready to go back to school, this time for an MFA at the State University of New York in New Paltz. Again, she chose a cross-disciplinary program that combined photography, design and video. For a thesis project, she placed video monitors inside tiny closets, built with the help of her future husband, Lars Alverson, who has strong skills in carpentry. Viewers had to open the doors to see the screens, which housed recreations of the artist’s memories.  And again, she bounced back to New York City after graduation, this time to work in commercial  photography for the fashion industry.

It wasn’t until 2010 that Svalbonas was able to concentrate on her art career full time. After a workshop in encaustic with fellow Vasari21 member Lisa Pressman, she experimented with that medium until ten paintings were lost en route to a show in Oregon. “They sat in a FedEx truck overnight in brutal winter weather and cracked. I lost of all of them,” she recalls. “I said, ‘I’m not doing this anymore.’ So I turned to painting on felt, which took a lot of trial and error, figuring out how to treat the surface to get the painterly effects I wanted with oil.” 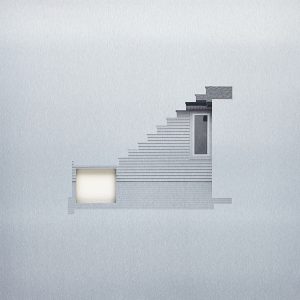 While living in Jersey City, NJ, Svalbonas became further intrigued with architectural spaces and “what our mind creates to house memories”—the topic of her master’s thesis at SUNY. “That expanded to our actual physical space, and what we define as home, what buildings we’re surrounded by,” she says. For a series called “Presence of Memory,” she created serigraphs on felt documenting the familiar but decrepit barns around Pennsylvania (the series also led to large-scale installations in Kutztown, PA, and Jersey City).

Another series, called “The New Deal,” created during a residency at the Bemis Center for Contemporary Art in Omaha, NE, stems from an interest in public housing in that city. These were transitory spaces, intended to help low-income families, and they featured prominently in the 1960s race riots in Omaha, when a black girl was shot by a white police officer. “Eventually the housing complex was completely torn down,” she says. “I dug deep into records to find plans for the buildings.” The works in that series, made from substrate prints and Dibond with gold leaf, are elegant but mournful, ghostly fragments of a utilitarian architecture that is rapidly vanishing from the cityscape. 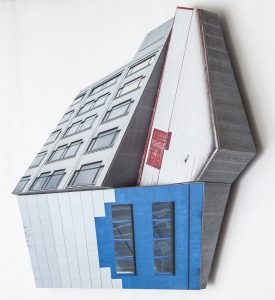 When she moved to Chicago in 2014, to teach at Columbia College, Svalbonas returned to using photography with a series called “Migrants,” which incorporates pigment prints and collage on boards and references architecture old and new—sleek glass-and-steel office buildings, mundane apartment complexes, and homely rural barns. “Wherever I go, wherever I live, I’m constantly documenting my surroundings. It’s a way to find my fit, to determine where I belong in this new space.” 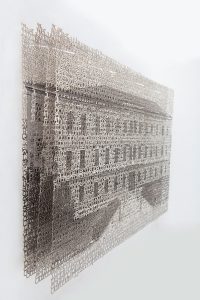 Last summer, funded by a crowd-sourcing campaign, the artist and her husband traveled to Germany to find what was left of the displaced-person camps that once provided refuge to both sets of parents when they were children. Svalbonas and Alverson are both of Latvian origin, and their families were forced to flee as the Soviets moved into Eastern Europe during the last days of World War II. “The fascinating thing is that these camps are not well documented, there’s no real paper trail,” she says. “So the way we did research was to go to a huge repository of paperwork that made it to a Lithuanian organization in Chicago. There were stacks and stacks. We were poring through large file folders to find things that had addresses—job applications, for instance. We used photos and addresses from the archives to locate the camps. The historical photographs were essential to let us know we were in the right place.”

The two of them focused on the former U.S. zone in Frankfurt. “Surprisingly a lot of these structures are still there. We were able to identify the same buildings. The camp my father was in is being sold off for commercial real estate. My best friend’s mother’s building is now a sanatorium, and a lot of them have been transitioned into apartment complexes.” The haunting black-and-white works from this visit, incorporating layered laser-cut pigment prints and text from refugee plea letters, are austere statements about displacement and loss. 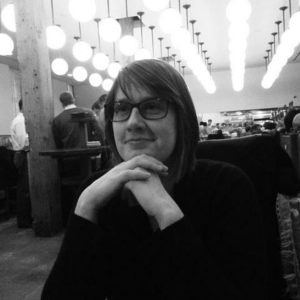 Just a few weeks ago Svalbonas moved back to the Philadelphia area, to accept a tenure-track position at St. Joseph University, where she will be, she says, “rewriting the digital-photography curriculum.” She’s been teaching full-time now for about a decade, and when asked how she’s managed to create an impressive body of work in just the past seven years, she answers simply, “I do my own work every extra minute of the day.”