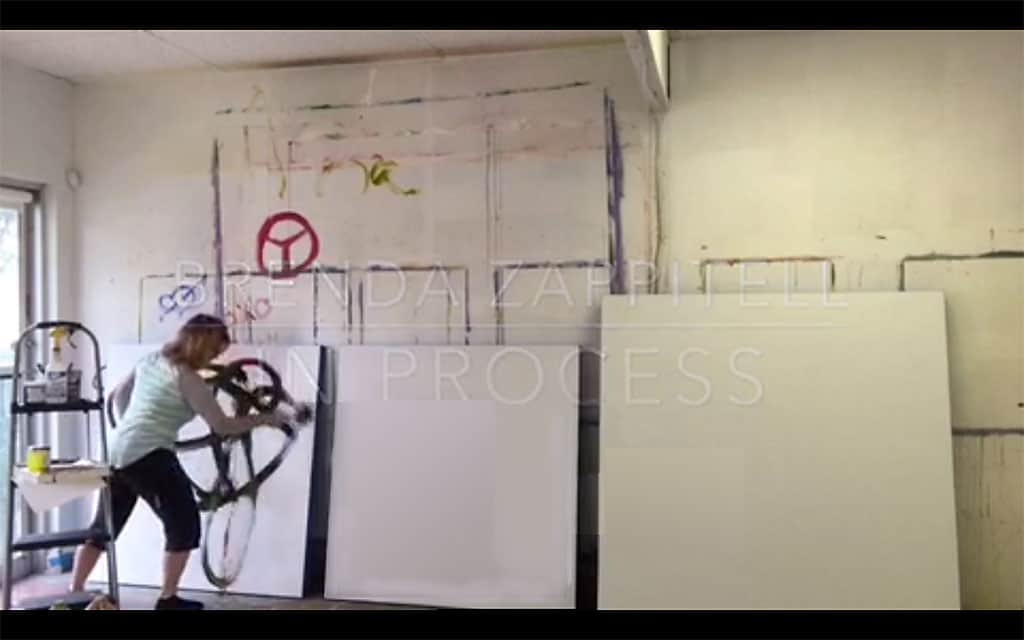 Getting the Most from Your Posts 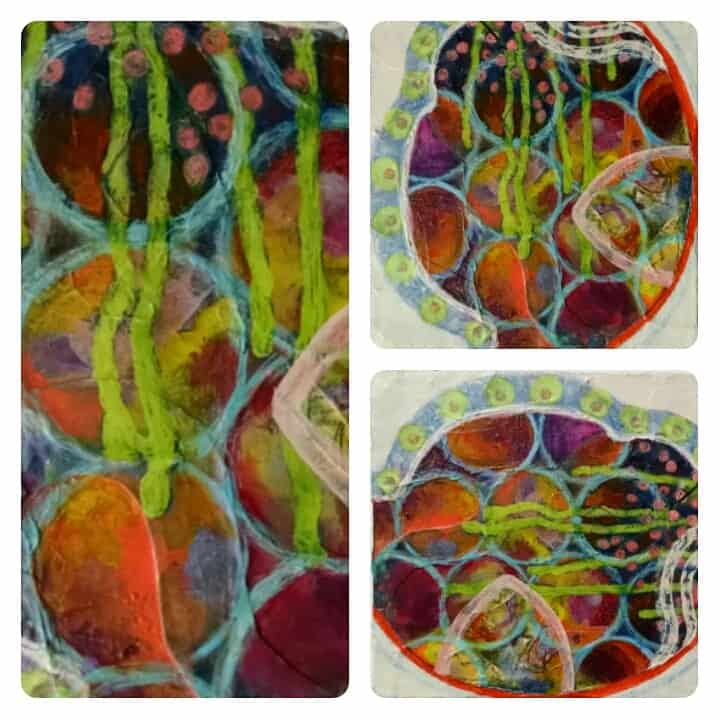 When a friend urged me to start posting on Instagram a few months ago, I immediately balked. I was already uploading a Vasari21 Pic of the Day to Facebook, pinning stuff to Pinterest, sending out weekly bulletins and updates, and generally promoting the site in any way possible, short of skywriting and smoke signals. I don’t own a smartphone—either that or an iPad is an Instagram requirement—because I’m perfectly happy with my pay-as-you-go stupidphone and I tend to resist gizmos that tempt me with even more access to the Internet than I have already.

But when my friend pointed me in the direction of a cheap rebuilt iPad, I signed on and got the hang of the system quickly, and now an Instagram check once a day is simply part of my routine. For me, it’s fun to see what artist members are up to, ways in which they might be changing directions, and to watch the occasional video that gives insight into their process. And it’s another place to post the Vasari21 Pic of the Day.

But what are the artists getting out of Instagram, beyond lots of likes from your friends? Quite a bit, as it turns out, though results are often unpredictable. 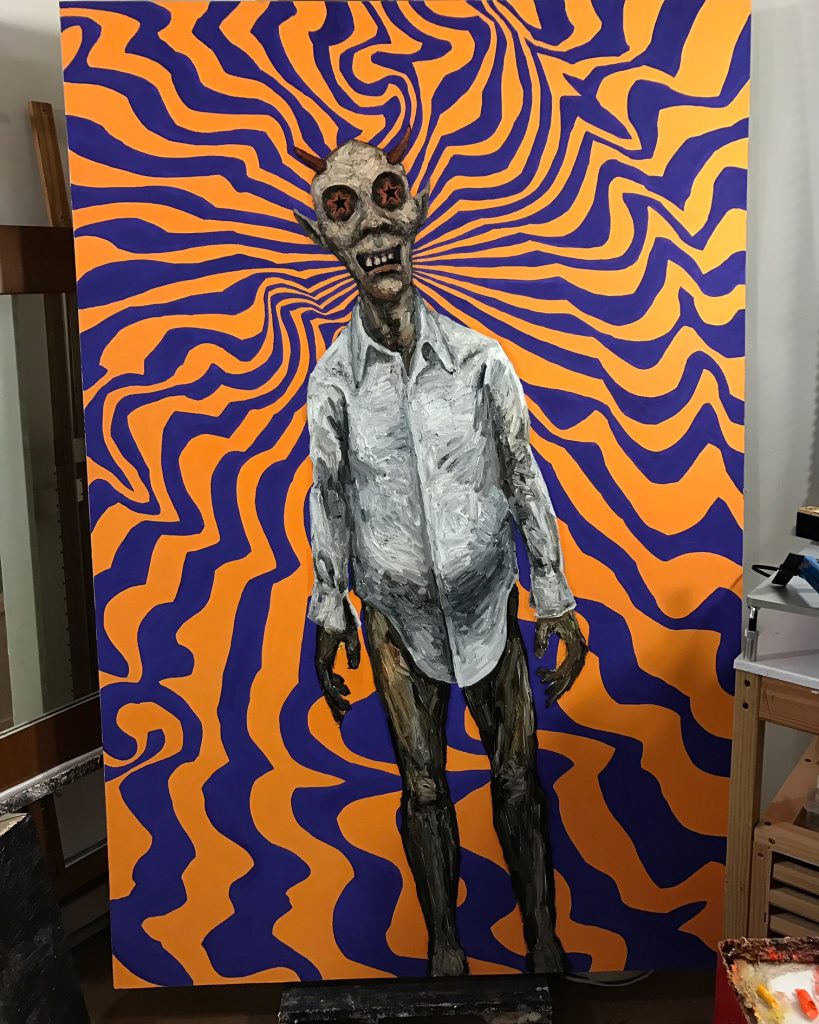 It is ridiculously simple and painless to sign on, by downloading the app to your smartphone of iPad, though I would advise having a friend take you through the initial steps and help you seek out followers. Uploading photos and adding captions is also a breeze, though the hashtag system (see below) remains somewhat of a mystery to me. You will find followers by using the search function (you can pick out artists, galleries, museums, whatever’s out there), and they in turn will lead to more followers….until you may reach the astonishing point where there are hundreds, even thousands, of people interested in your posts. (Jerry Saltz of New York magazine has a staggering 198,000 people who follow his posts, which probably makes him the world’s first viral art critic.)

As becomes apparent immediately, Instagram is a much more visual platform than Facebook. There is none of the clutter of FB’s pages, which include a huge cacophony of ads and photos and other bells and whistles. There is simply your image (which you can learn to edit with systems like Squareready and functions on Instagram itself) and whatever caption you choose to add. This uploads to a feed, much like Facebook, where followers can “like” and post comments.

Most artists love the way it quickly increases their communities and leads to connections around the globe. “I like seeing what kind of work is being done in different places,” comments Christine Sauer. Adds James Deeb, “I’ve been on Instagram about a year, posting three times a week, which comes to about 150 posts a year.  It’s a way to build an audience of people who are not familiar with my work.”

The site members I interviewed report that Instagram postings do lead to occasional sales, but the platform is not, for most, a way to generate a steady source of income. “You’ll see collectors out there. There are different groups that pop up,” says Sauer, who believes the attraction for these may be more affordable prices than you’ll find through a dealer. Others find the system a good way to keep collectors they already have apprised of where their work is going. “I have sold work on Instagram, but to people I already have as clients,” says Andrea Broyles. 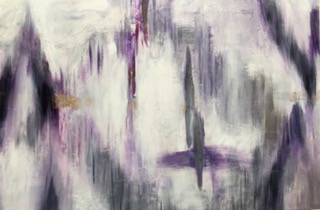 Andrea Broyles posted about a recent transition to abstraction: Shift (2016), oil on board, 18 by 26 inches 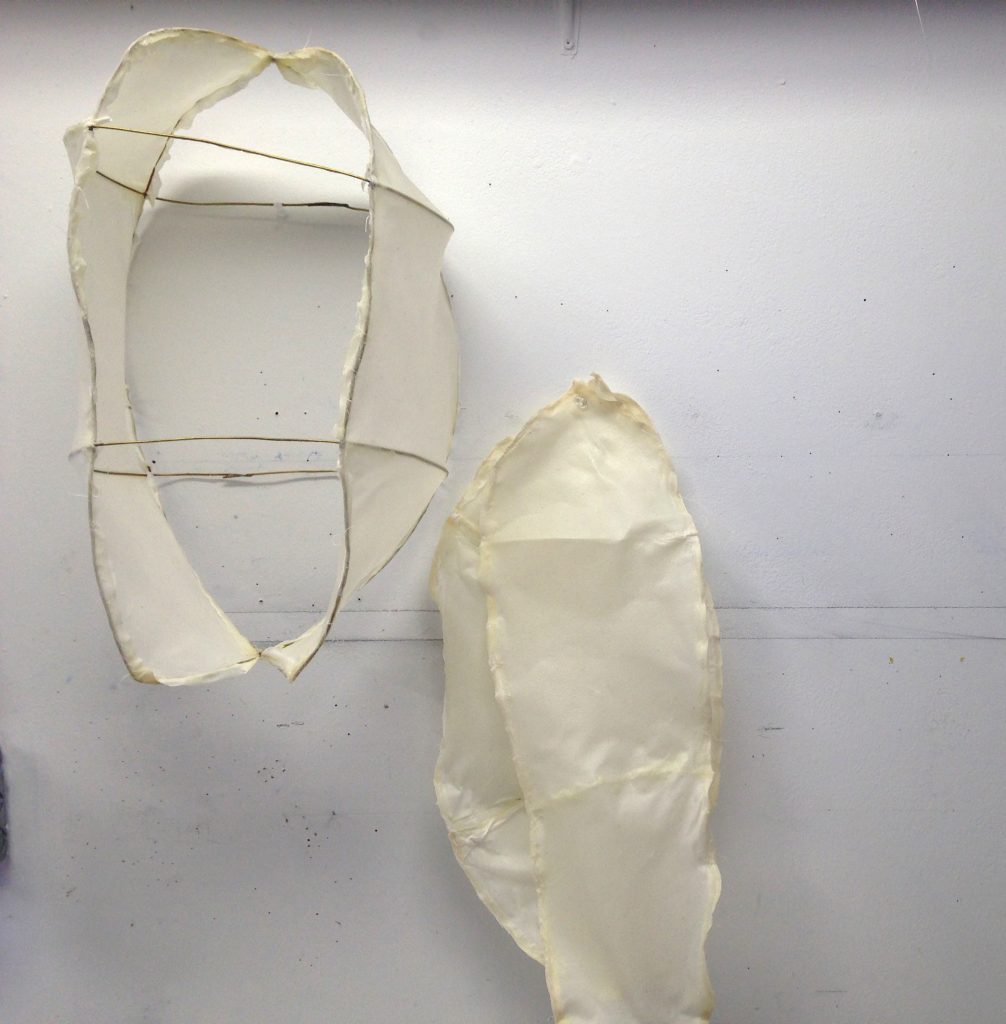 A work in progress by Lorrie Fredette

“There are a lot more galleries and businesses on Instagram than on Facebook,” says Lorrie Fredette. “I have two following me who have sent me emails.” She says the overtures are more like a tap on the shoulder, saying “Hello, how are you?” rather than a serious inquiry into her practice. “The galleries that do represent me follow me, and that allows me to get work out to them quickly,” says Brenda Zappitell. “I haven’t sold anything yet and I don’t know that I will, but I think Instagram helps reinforce what you’re doing with people who are already aware of it. I’m looking down the road to have several audiences that follow me, including curators and potential buyers.”

One marketing foray that proved hugely successful was initiated by Elyce Abrams, a painter in Philadelphia, who launched what she called the “100 Paintings Project” on January 1, 2016, with the goal of producing that many small canvases at a price lower than she usually asks for her work. “I wanted to start conversations around abstraction, grow my audience, and send them out to new homes,” as she noted on her website. “I wanted to see how my work would change and go in new directions with this challenging project. And I wanted others to experience the process with me.” Within a half hour of posting the first painting, she sold it to a collector in California who had been following her work. Abrams ended up producing 125 one-foot-square paintings altogether, of which about 80 found new homes at $200 each plus shipping fees. The project, she says, was a way of making herself more comfortable with self-promotion, and adds, “I didn’t post anything that I wasn’t 100 percent happy with.” 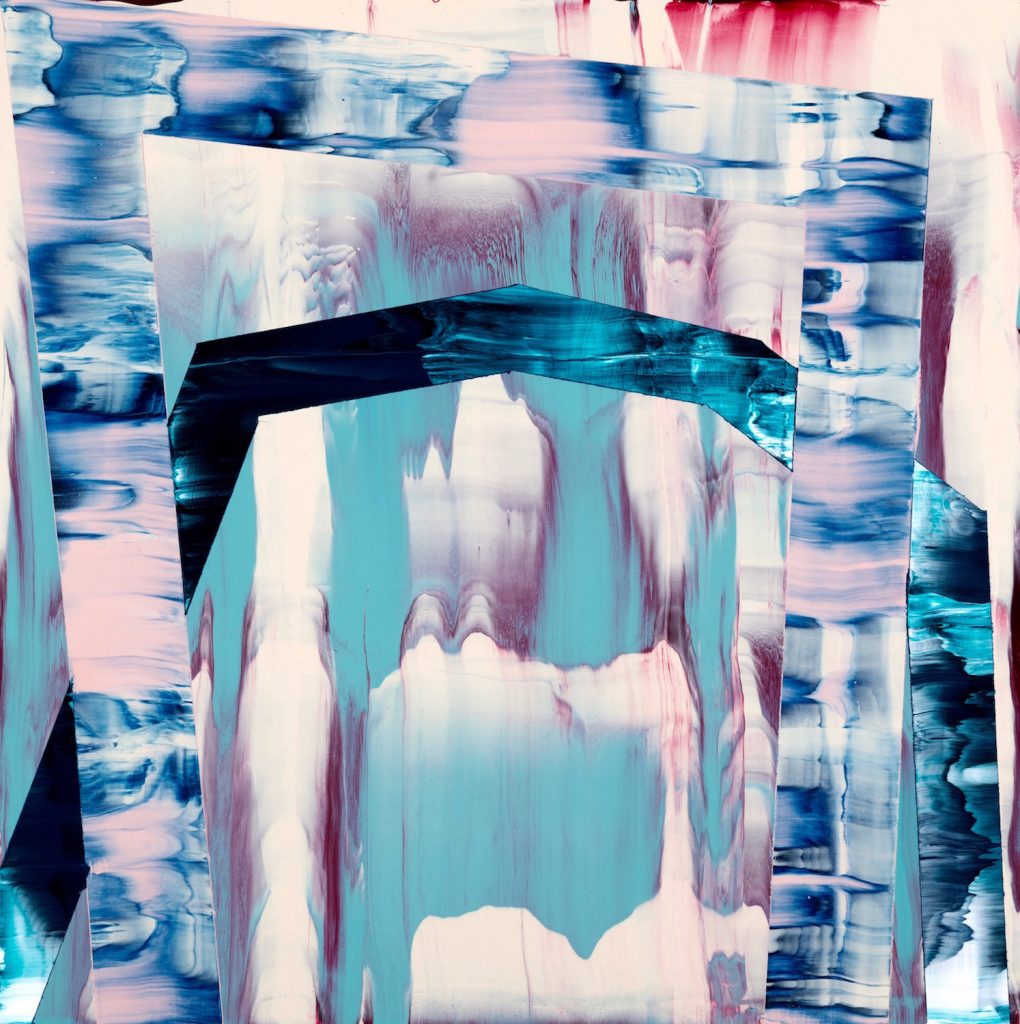 Most internet advice columns advise posting once a day—“anywhere from one or two images on up to a handful (but not more than that),” says one. (You will find options to post several images in a kind of framework.) The artists I spoke to all post at least three times a week, with minimal commentary (I tend to natter on because I’m a writer, for heaven’s sake, and that’s what I do….people can take it or leave it).

Mondays, believes James Deeb, are the best times to post. And Bushwick artist and curator William Norton thinks you should be even more specific than that. “It’s important to post at the same time every day,” he says. “People know when to expect it, when to look for it. It’s best to post after the work day, or an hour or so before the end of the work day.” If you’re reaching out to an audience halfway around the world, then of course it makes sense to post later at those times of day that will correlate with overseas down time. 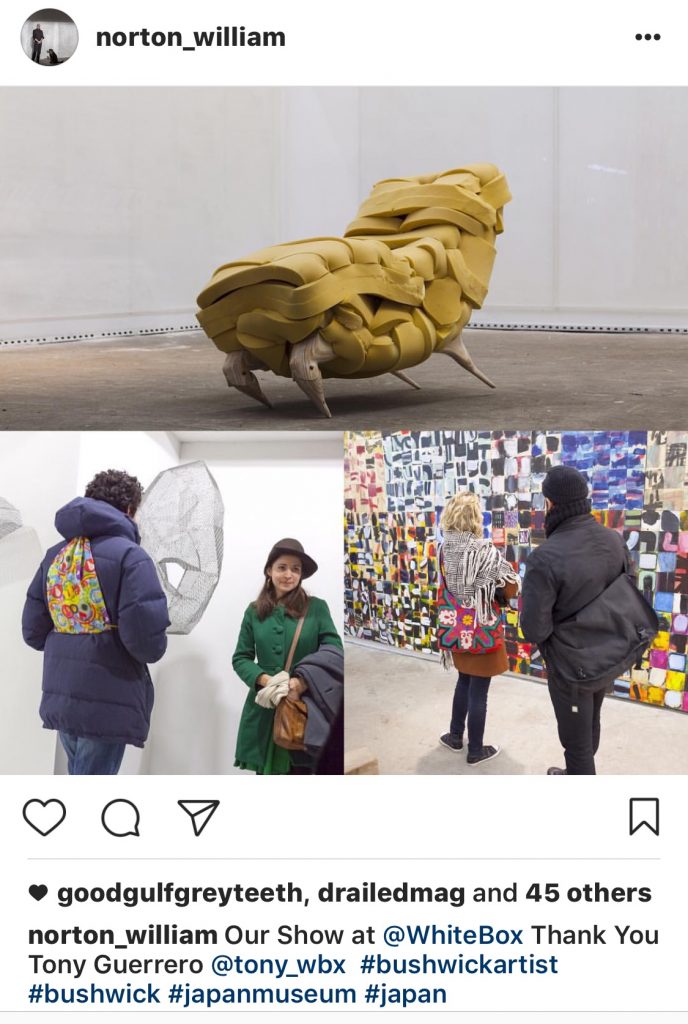 Norton has also found that he gets more attention if he can find something clever to say about other people’s posts, beyond simply clicking the “like” (or heart) icon. “My goal is to make people aware of me and to build a brand.” He adds that he never asks gallery personnel directly to look at his work, and this seems the best tactic. Keep posting, building your network, keep your comments lively, and they will come to you.

Lorrie Fredette likes using Instagram as a way of slowly letting people into her day-to-day existence as an artist. “I’ve used it to reveal a little bit more about myself than I would on Facebook,” she says. Norton, who has posted step-by-step photos for the preparation of his Thanksgiving lasagna along with videos of his dog in adorable outfits, also believes that it’s good to give people “a glimpse into your life.” (But it should be added that a steady stream of cute pet pictures or travelogue photos from exotic vacations can quickly grow tiresome.) Because he’s a curator, Norton likes to post photos of works by artists he includes in his show. “People like generosity,” he notes. “When I’m doing a show, I spend some time every day posting something from that show.”

Over time, your photo stream should evolve into a journal of your life as an artist, abundantly illustrated with images of your work and of you at work. It can amount to a sort of online autobiography, perhaps even more appealing than a website and a better point of entry into your career. “I get more eyeballs on my work through social media than through my website, which has become almost a secondary source of information,” notes Deebs. “People look at Instagram and then go to the website to get more information. That’s the next step. It’s no longer the first point of contact.”

“The hashtag is a metadata tag used across social media platforms to make search and targeting easier,” notes an internet primer from Agora Gallery. “In simpler terms, it is a word or a phrase preceded by the hash character or the pound sign (#) that helps people look for a specific kind of content. For example, searching for #bluesky on Instagram will give you countless images uploaded by Instagram users of blue skies.”

That’s all very well and good, but it’s hard to understand what formula will bring the most interest. “I put in anything I can think of—geometricpainting, abstractpainting, contemporaryart,” says Jane Barthes, an artist in Chicago. But the broader categories tend to encompass a huge number of posts: “sculpture,” for example, brings up about 6.4 million images, though you will find them categorized by “top posts” and “most recent.”

The artists I interviewed often had their own individual systems for posting hashtags. “Right now I normally post my name, contemporaryart, contemporarypainting, studiopractice, encausticpainting, and perhaps the name of the piece,” says James Deeb. Others favor more specific tags that apply to the genre or nature of their art: contemporaryprimitive, biomorphicinstallation, or bayareaart. “One of the artists I’ve included in shows has a strong interest in Asia, so we use hashtags that get his work seen by people in Korea, Japan, and China,” says Norton. “I’ve noticed lately that a couple of Korean curators have been following me, giving me ‘likes,’” he adds. 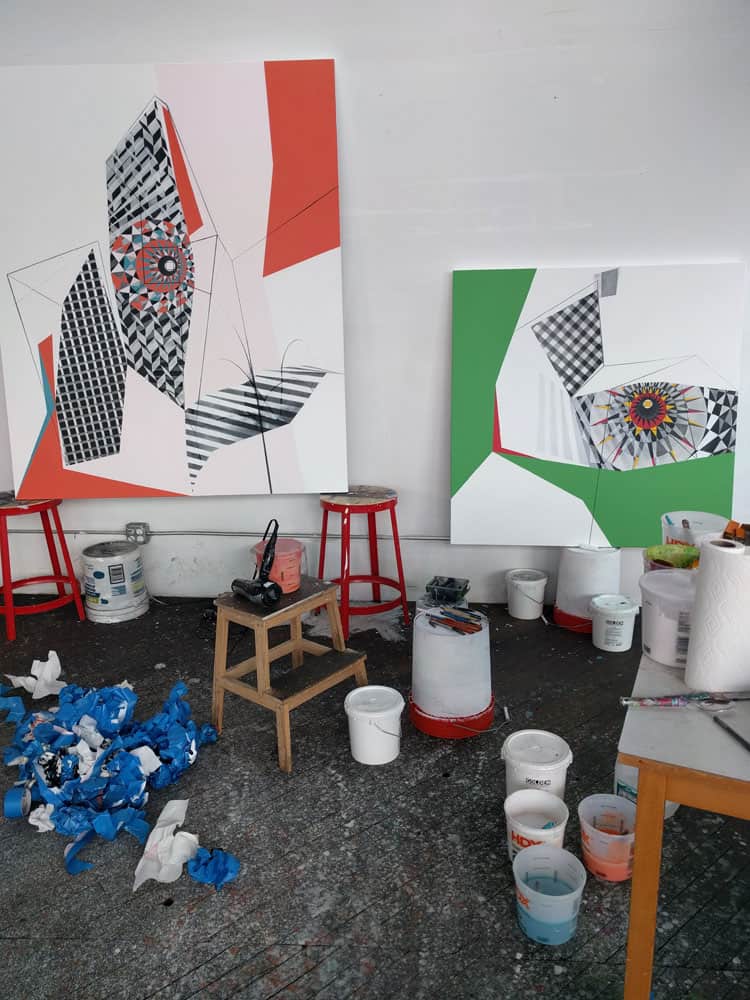 I haven’t yet discovered what formula works best for my postings, which generally amount to a Vasari21 Pic of the Day daily (duplicated on Facebook), and occasional glimpses of my cat, Sylvia, stepping daintily from the dryer or sharing a plate of pasta. But I’ve gained almost 500 followers since joining Instagram in mid-October, and I thoroughly enjoy the medium, which allows for quicker browsing than Facebook and seems not to attract as much political vitriol.

“I cast my images into the infinite global sea of art and wait to see what happens,” says Barthes. “Through Instagram, I have an offer to decorate a trendy, upmarket clothes store in Chicago next year. I have been picked up by art sites showcasing all kinds of art they love and that immediately expands your audience. And I know a couple of artists that have been invited to partake in international, group shows through being spotted on Instagram.”

“It’s all about fishing,” she adds. “But I think you can fish intelligently.”

Top: The cover for a video Brenda Zappitell posted on Instagram of herself at work in her studio.