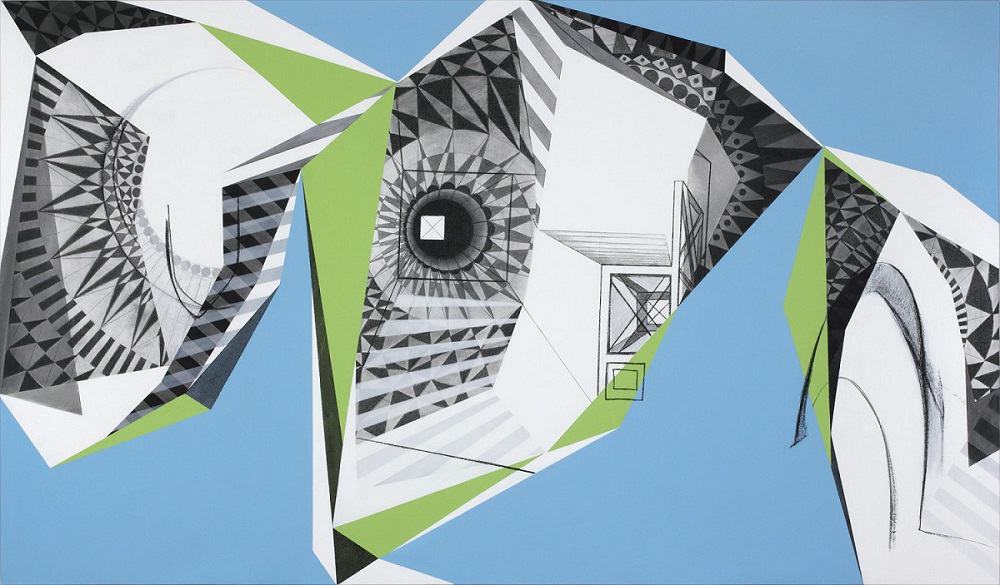 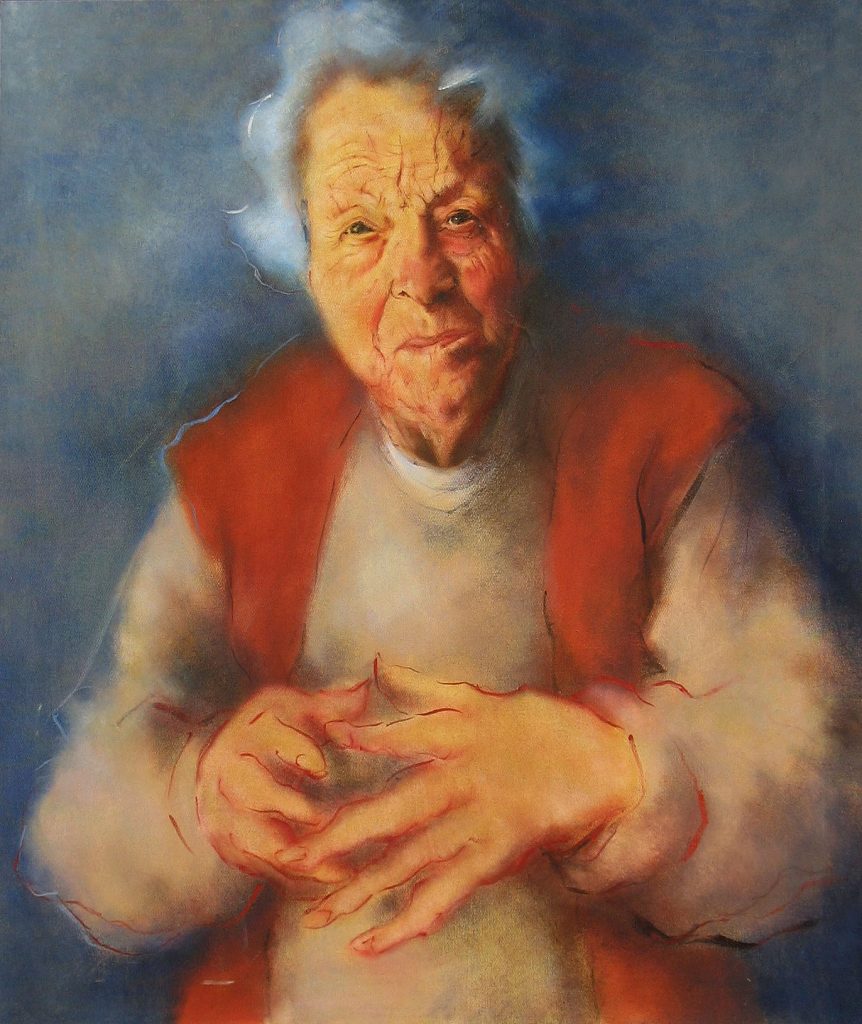 In Jane Barthes’ first incarnation as an artist, she was both the heroine and the creator of a comic strip about a frustrated 18-year-old girl living in London. The main character, Mona, had a fairy godmother who would whisk her off to different adventures. “She’d go to a ball and meet the perfect man,” Barthes recalls, “and then at midnight she would suddenly be wearing her jeans again. Or the fairy godmother would lead Mona to the edge of a cliff, tell her to jump, and she’d wake up in her living room.

“Mona’s adventures, simply put, were a search for happiness, the perfect man and Utopia—which lay beyond the cliff,” adds the artist. The comics were for her own private gratification, not for publication, and at the time she was working temp jobs for two or three weeks and then devoting the rest of her time to drawing. 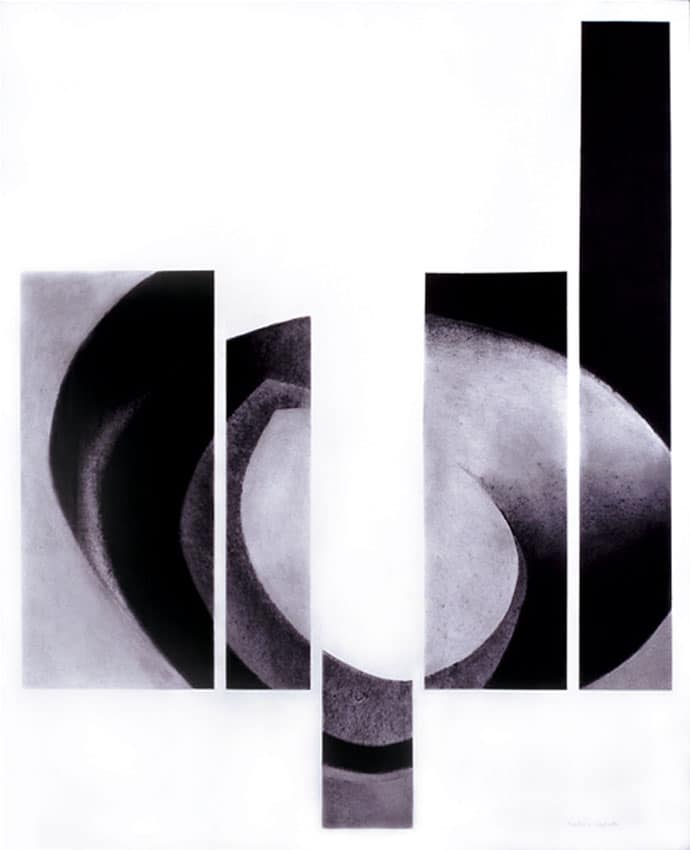 “I was born drawing,” says the artist, who grew up in London and, though now living in Chicago, retains a crisp British accent. But there were also long summers in France with her family (her mother was a teacher; her father worked in an import-export business), and she easily became bilingual. But in spite of Barthes’ obvious talent, the family was not encouraging. “Being an artist was not for people like us,” she says. “You certainly couldn’t make a living like that.” And, in fact, her growth would be in many ways impeded by a father she describes as “violent and verbally abusive.” 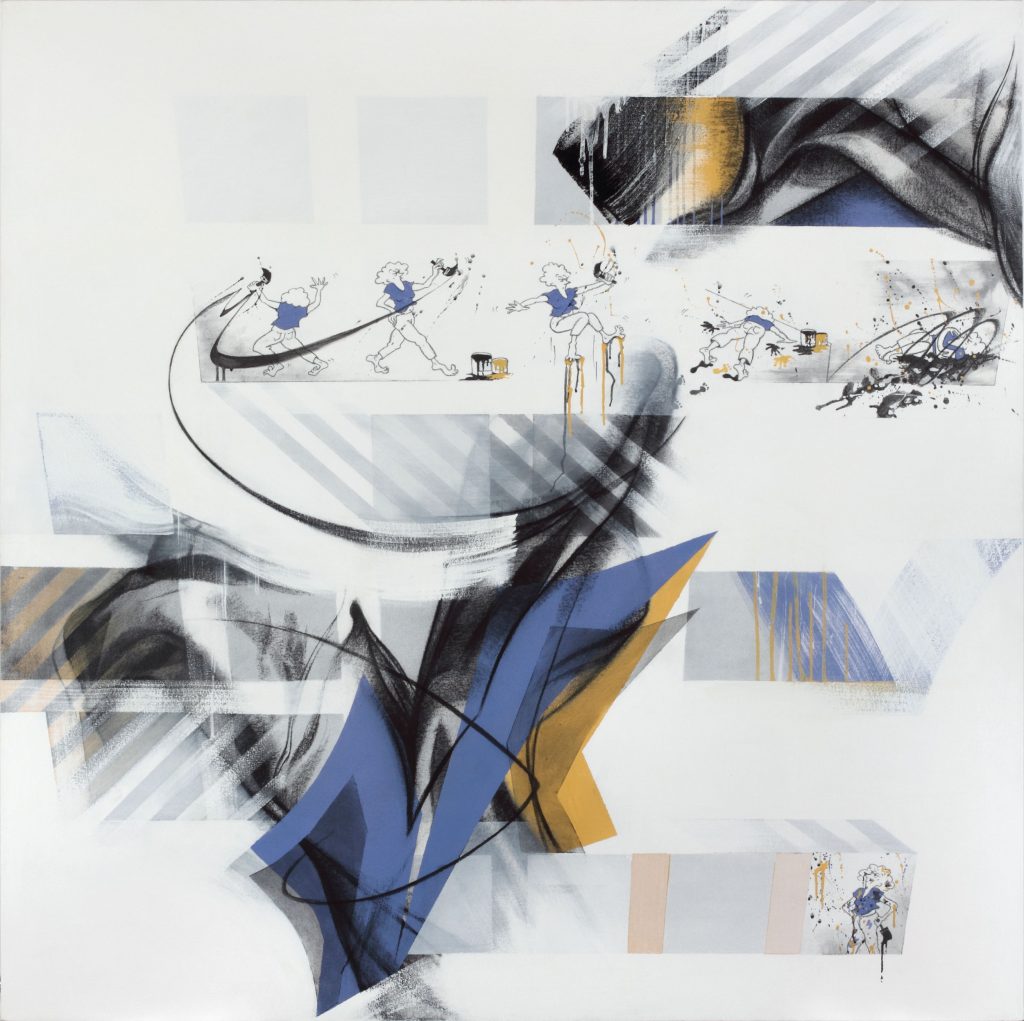 After earning a master’s in anthropology in the early 1980s, and another degree in clinical social work, Barthes finally “plucked up enough courage to go to art school” in 1990. She was admitted to Wimbledon College of Arts on the strength of her comic strips and a couple of life drawings, and at the time was most interested in British figure painters like R.B. Kitaj and Lucian Freud, as well as the suavely symbolic paintings of German expressionist Max Beckman.

Immediately after graduation, she left the U.K for the south of France (Barthes is half-French), settling in a studio in a vineyard outside a small village near Nimes. She was there for ten years and gradually segued into abstraction, making enormous drawings in charcoal. “I would get to Paris to fill up on culture,” she remembers, “but mainly I was very isolated. I was pretty terrified of people for a long time, and so I was happy on my own.” 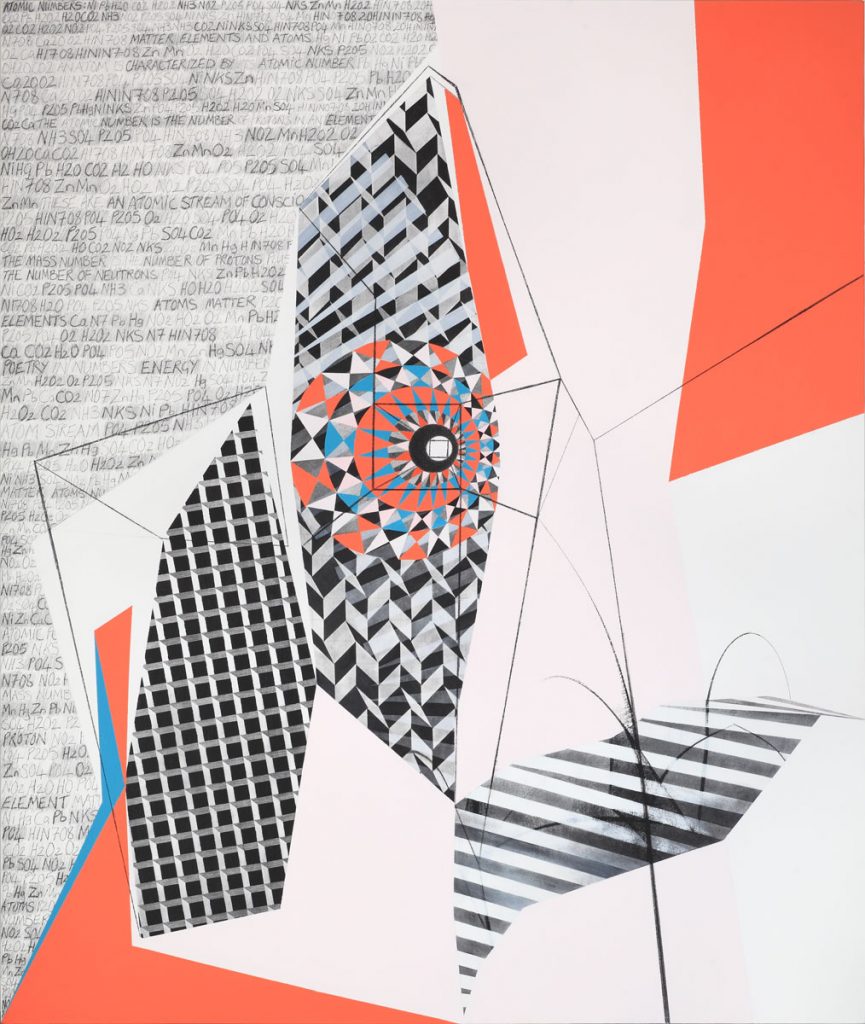 Wanting to put more distance between herself and her family, in 2004, Barthes landed in Black Mesa, near Espanola, NM, in an old candle factory. She became friends with several other members of Vasari21—including Sheila Miles and Diane McGregor, both of whom she considers like a “second family”—and landed a gallery soon after arrival. “I lived there for five years,” she says, “and then the recession happened. Everything was going unbelievably well, and it just crashed.”

By then she had a partner, who works in information technology, and both felt they needed to be in an urban environment. Chicago was the choice for its big-city vibes but still relatively affordable amenities. Barthes discovered, however, that “the galleries wouldn’t talk to me.” So she ended up volunteering for a domestic-violence crisis line, working in emergency services, and attending classes at the University of Illinois at Chicago to earn another master’s degree in clinical social work. 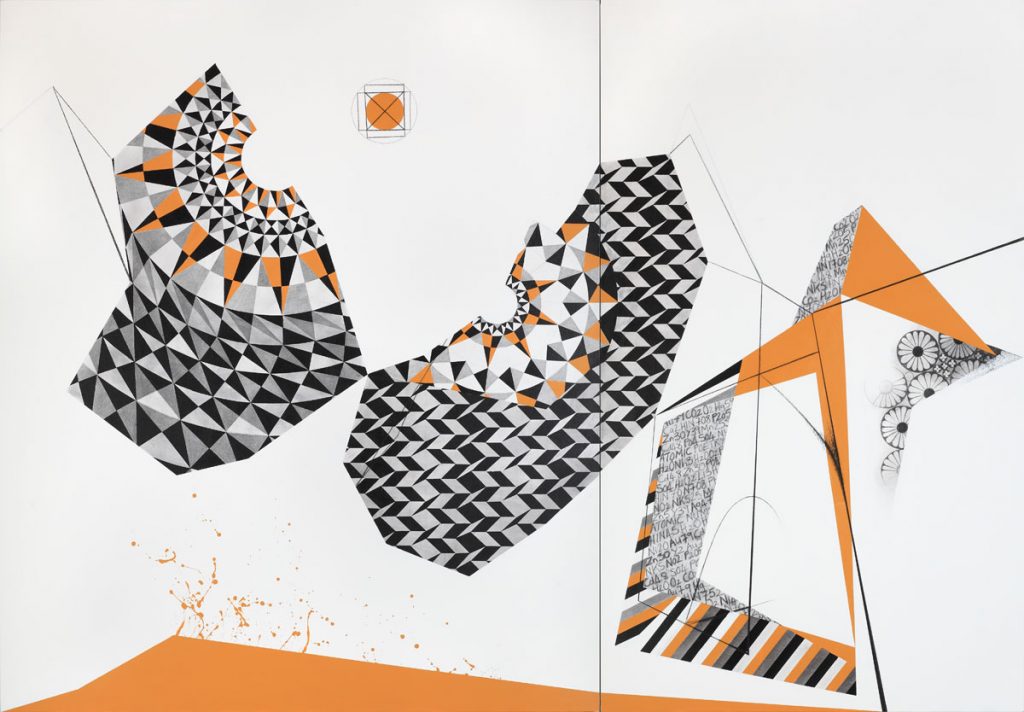 For about five years she gave up painting completely, and then around two years ago her work was noticed by a patron she describes as a “woman from the fashion world,” who stumbled across her website while looking to decorate the walls of her Manhattan apartment. This real-life fairy godmother told her, “I have to help you get back into the studio.”  She supported the artist for 18 months.  “I dropped my job right then and there and went back to painting full time,” Barthes says. 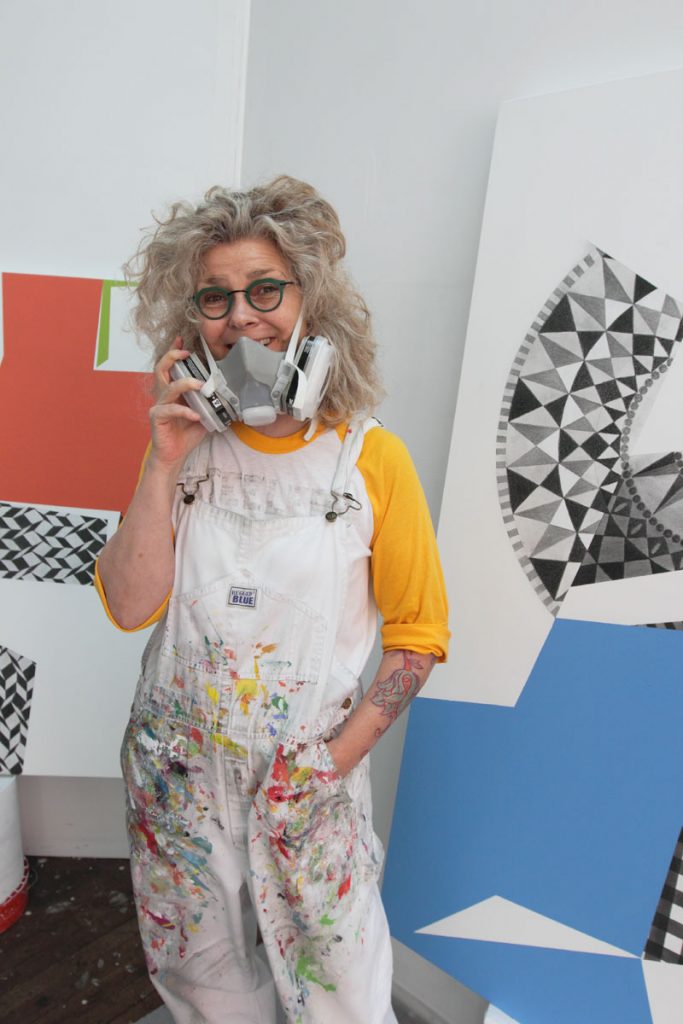 Jane Barthes in her studio.  More about the artist can be found at jbarthes.com.

Her work, Barthes says, has always been “profoundly about energy, about the infinite possibilities of three-dimensional space.  It was a personal  revelation when I stumbled on the physics of matter and energy in books. I think I’m trying to solve the same problems, albeit in a different way, through intuition, not math.

“Art has always been a space of personal freedom for me,” she adds. “It’s been an incredible human journey.”