There is a gentle mystery in all of Andrea Broyles’ work, whether on paper or canvas or in any number of sculptural mediums, from clay to resin. The art historian in me wants to relate her to Surrealism, but her realm of fantasy seems so much dreamier and more intimate than those affiliated with that movement; she makes Magritte or Dali look like strident pranksters, obvious and shopworn.

It’s a rare artist who will seek out guidance in midlife, an age when most think they have mastered the fundamentals of their craft and figured out the direction of their vision.

In Broyles’ world, teardrops fall in a barren landscape, a little girl is led by a pair of birds, a regal female figure shares a boat with two owls, or a translucent golden torso reveals an interior riddled with bullets. Most recently, the body seems to be emerging from or struggling with foggy mists or bad weather or maybe the murky depths of a lake or ocean. Right now, says the artist, her imagery is about “transition and loss,” as her three children are one by one leaving the nest. “I feel a consciousness of time and how it all seems to have gone so fast,” she says, but adds that any single reading is too facile. “I like to have multiple meanings and multiple levels.”

Broyles grew up outside Toronto, Ontario, where the family lived on a remote farm. There were four daughters, and few conventional distractions (like television), and “so we had to entertain ourselves,” she recalls. “We drew all the time, and we had pet rats, guinea pigs, rabbits, and other animals, and we made little towns for them.” She moved as a teenager to San Antonio, TX, and went to college at the University of Texas at Austin, earning both B.A. and B.F.A. degrees. In her last two years, Broyles focused on ceramics, building a series of six-foot-tall towers. “It was my impression that going to grad school would mean I’d have to teach,” she says. Instead she worked in a gallery, built furniture, waitressed, and started a tee-shirt company using her own designs

A few years after marrying William Broyles in 1995, the couple moved from Austin to Jackson Hole, WY, because he had always longed to live in the Tetons.  (Bill Broyles is a successful screenwriter who has worked on many television series and the movies Apollo 13, Planet of the Apes, and Cast Away, in which a character based on Andrea is featured; she also designed the wings that later became a central metaphor in the movie.) Their children were born in Jackson Hole, and Andrea was able to maintain a studio practice, in spite of a then-uninspiring art community. But after 11 years—and nine months of winter every year—the Broyles decided to move to Santa Fe, NM, where there are both mountains and greater proximity to family in Texas.

Because so much of her work depends on a figurative presence, Broyles regularly attends drawing sessions with a life model, consults books on anatomy, and occasionally looks to magazine photography to suggest poses and details. For a recent project, she has photographed her younger daughter’s limbs emerging from a bath of powdered milk, and will work from those images toward final paintings.

Broyles moves fluidly from sculpture to painting to drawing, and in her studio is a rather staggering display of work from just the last two months, including the almost life-sized figure of a girl either walking a pair of birds, or being led forward by them. The most arresting of the paintings may be a seven-foot-long canvas of characters occupying a boat: a young girl with copper-colored braids at the far left, a saintly-looking fellow near the center, and another releasing a stream of ghostly fish at the right. It’s a painting she struggled with for eight months, and was about three-quarters done when, on a trip to Cuba, she discovered a remarkably similar canvas in the Fábrica de Arte Cubano. It was sheer coincidence, but it did help her resolve the oneiric boat setting.

Also in Cuba, on a weeklong jaunt with other artists this winter, she discovered the pleasures of working with and learning from her colleagues. When she returned to Santa Fe, she decided to hire a mentor, Francisco Benitez, an artist who divides his time between New Mexico and Europe and whose work might best be described as magic realism. What is a 50-something woman doing with a mentor? Learning about new mediums like encaustic, getting formal critiques, and investigating the tools and means of the past. “We have an appointment every six weeks or so,” she says. “He is such a great, passionate, and informative teacher. I may not study with him forever, but for now it works.”

It’s a rare artist who will seek out guidance in midlife, an age when most think they have mastered the fundamentals of their craft and figured out the direction of their vision. But as her kids are heading off into new territory, it seems possible Broyles is making transitions of her own. There may be a lot more going on in that boat than meets the eye. 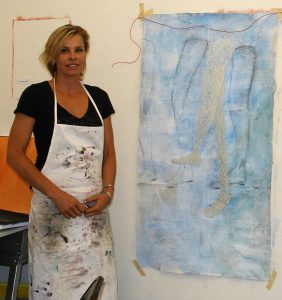 Andrea Broyles has exhibited in many group and solo shows nationwide, most recently at the Pleiades and Sylvia Wald galleries in New York and Avenue 50 Studio in Los Angeles. She has forthcoming shows this month in Santa Fe at Argos Gallery (June 17-July 3) and Vivo Gallery (June 1-August 15). A monograph of her work, A Gathering, was published in 2007, with an introduction by Alexandra Fuller. More about her can be found at andreabroyles.net.