Need an affordable but impressive gift? Got empty shelves and wall space? Artists come to the rescue…. 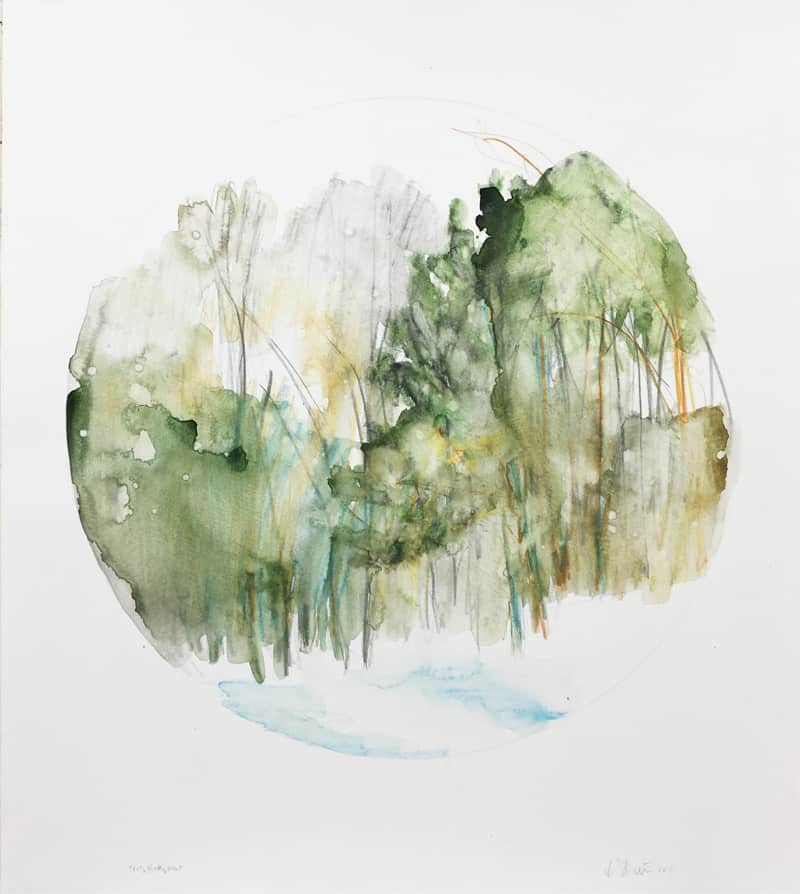 Karen Fitzgerald, Trees Winter West, a print realized from the original watercolor in many sizes and formats

These are tough times for everyone, but especially for artists who have lost teaching gigs, commissions, and gallery shows. Small wonder some are turning to online shops, and posting “products” that fall more into the realm of crafts, perhaps, than “fine art.” Sometimes these are one-of-a-kind items, but more often they are multiples, like prints, or wearable goods and accessories, such as scarves, kimonos, and handbags. If you think this is somehow a dumbing-down of your artist’s practice, consider that Alexander Calder made collectible jewelry, Isamu Noguchi designed lamps, and almost every major artist has produced prints.

Indeed, prints are the most common means of getting your art out there at a reasonable price, and there are several ways to go about this, short of installing your own lithography or etching studio. “I have been wanting to offer prints of my watercolors for quite some time,” says Karen Fitzgerald, “but I didn’t want to have an inventory.” Fitzgerald’s one-of-a-kind practice is devoted to images in the round (aka tondos) with subtle, sometimes gilded, surfaces that call to mind gardens, landscapes, clouds, and other elements of the cosmos. They sell for up to $15,000 for a painting six feet in diameter. Her prints, on the other hand, start at around $42, depending on the size and paper, and can be custom ordered in different dimensions, with or without mats, and framed in attractive wood (from white to walnut or charcoal) or mounted on Gatofoam (a stiffer version of Foamcore) An 17- by 20-inch print of the image called Ridge at 103 VT, with no frame, costs about $100. With a three-inch mat and frame, it might run around $625. The variables are almost infinite up to a size of 40 by 53 inches. Fitzgerald herself never touches the print, not to mat, mount, frame, or ship it. Instead, she works with Bay Photo Lab, which charges about 15 percent of the total cost. (Fitzgerald’s print store is here.)

She chose to limit the multiples she sells to reproductions of watercolors, which are “on the borderline of abstraction,” she says. “Viewers relate to them as landscapes because of references to the horizon and to natural forms. The prints are about helping people who don’t know anything about art, who love art, in a way that they can come to it at a price point they can afford. Prices for an original watercolor are very modest, under $1,000, but a lot of people can’t go there.” 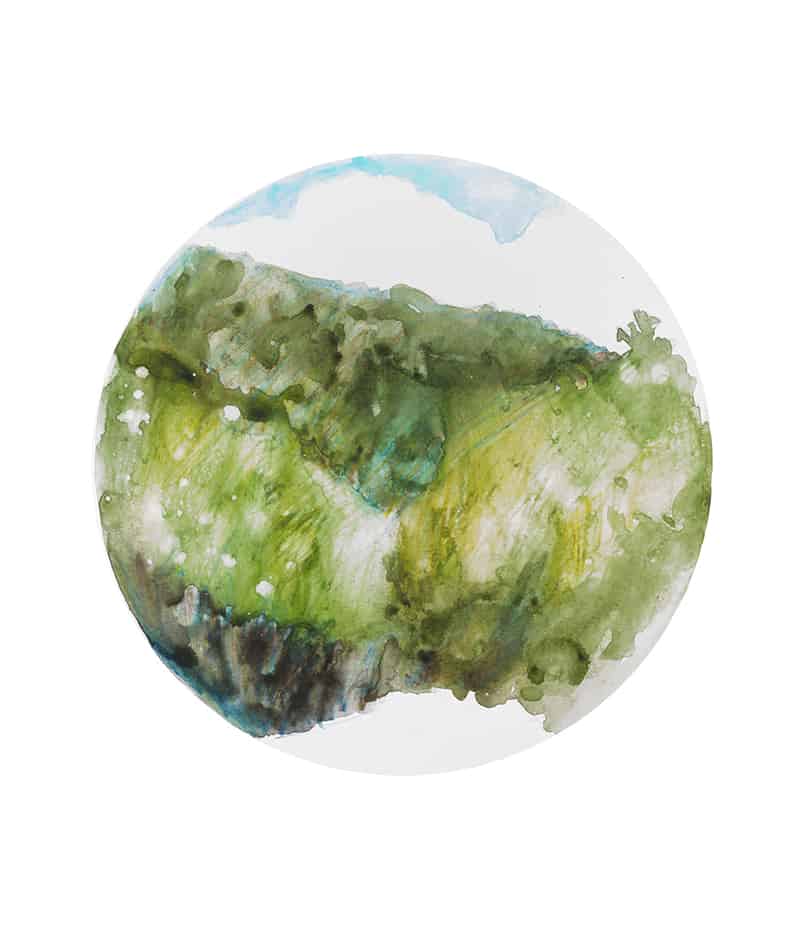 As for marketing the work, she has left that to an assistant who works with her one day a week to get the word out on social media, including Pinterest and Twitter, and to produce a separate monthly newsletter dedicated to the prints. To attract more readers to her newsletters, she’s about to raffle off a print. “We’ll take all the people who sign on to my email list and put them in a spreadsheet, assign them a number, and then pick a winner.” 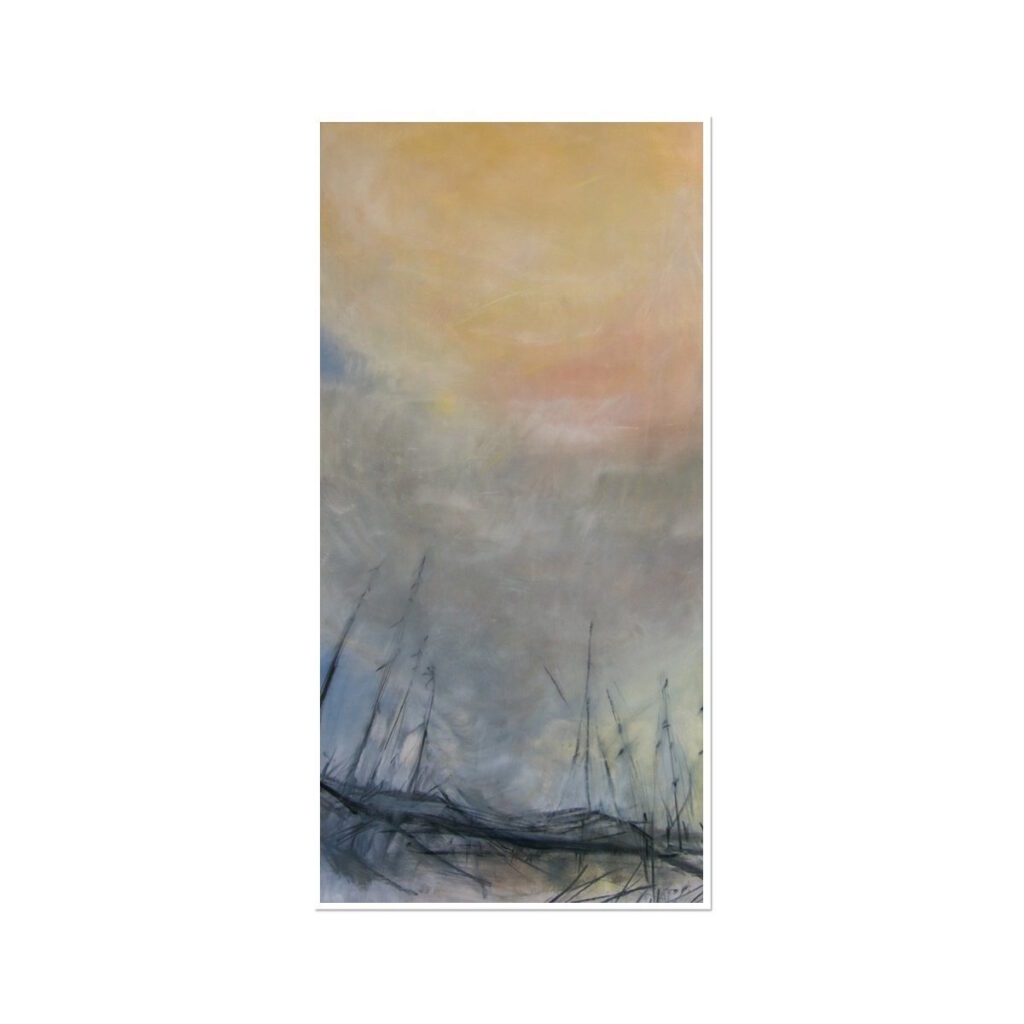 My Taos neighbor Theresa Gray also makes prints from her ethereal visions of landscape and still life, in different mediums on canvas. At first she used her own printer, but now, working with Prodigi and Shopify, she can still keep her prices super-low, around $25 to $75 for unframed prints and $110 to $190 with frames. Shopify, an e-commerce platform, also takes care of selling and shipping. Like others, she uses an app called Artrooms to show what her work would look like in a dining or living room. (There are alternatives out there, like wallapp and ArtSee, but Artrooms seems to earn the highest marks, and like many of these platforms, offers a free trial period.) She takes advantage of social media and produces four newsletters with updates on her print production. 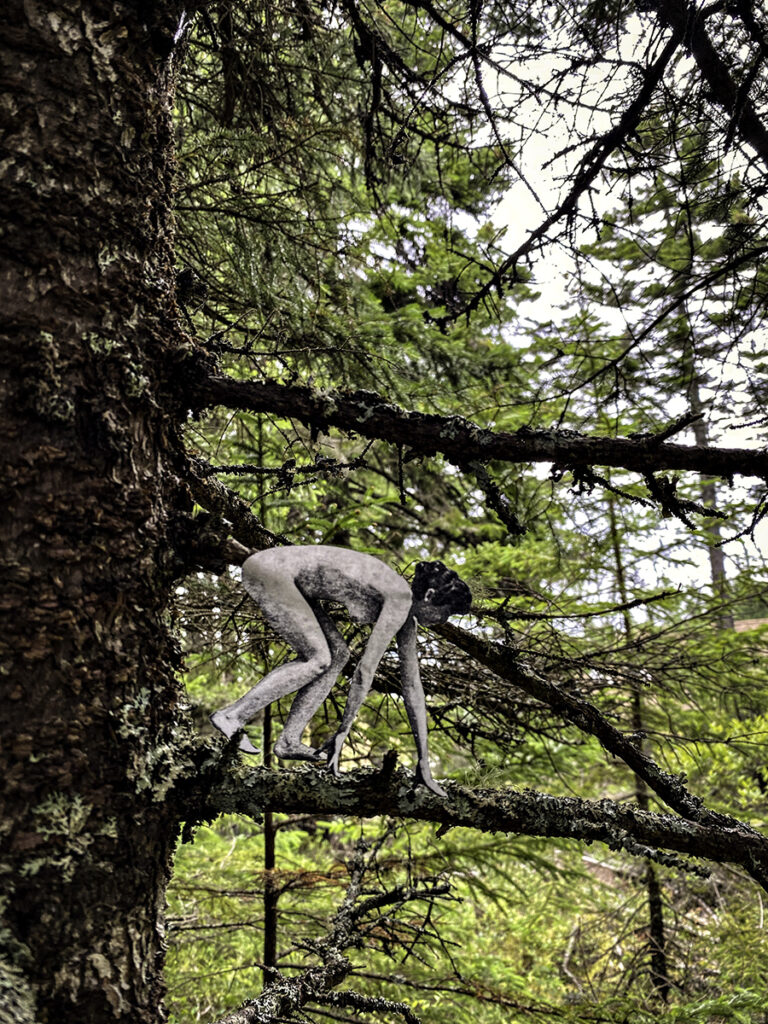 Leslie Fry, Out, a print from a photograph, reasonably priced as a print on either archival paper or aluminum

In the immediate wake of the pandemic, Leslie Fry lost both an adjunct teaching post Dartmouth College as well as a lucrative sculpture commission for a New York City hotel. During a summer residency in Maine she created images unlike any work she had made before. “It was July, but it was really cold,” she recalls. “So cold in the mornings that I would walk for three hours all around the island just to keep warm while photographing the amazing, dramatic landscape. I had brought with me leftover bits and pieces from years of collage projects. After a while I thought, Why don’t I place some of these ‘characters’ from my collage leftovers into the landscape?” The upshot is a magical series called “Norton Island Visions” that imagines, say, a medieval city with ramparts and towers tucked among the rocks at the water’s edge, or a Flemish maid, deep in the woods, reading her prayer book at the base of a moss-covered tree. During her last days on this uninhabited island, she sculpted two “bird people” from twigs, moss, seaweed, pinecones, and old pages from the “Sirens” section of The Odyssey. She then photographed these figures in the landscape for a series called “Wanderers.”

Returning to “real life” and the matter of how to make up for lost income, she thought about making a limited print edition of these images to sell, which then led to creating an online shop that opened in September. 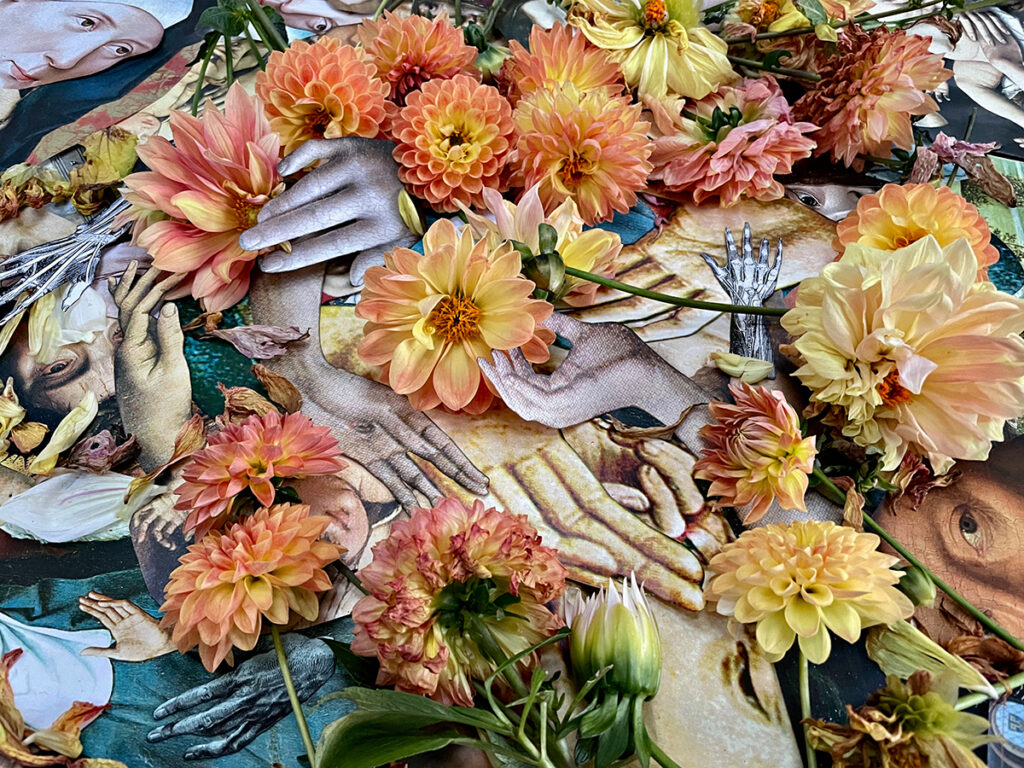 “It’s been a constant learning process,” Fry says. “I spent a couple of thousand dollars having these beautiful prints made, in editions of ten. I did make sales. But I started to realize that nobody cared if it was a limited edition. They simply chose images that they liked.”

Then she hit on the idea of printing on aluminum (super durable and no need for framing). She started photographing another series called “Vermont Life,” again using bits and pieces (a disembodied leg, a headless torso, an early Medieval townscape) embedded among trees or set against a lakeside. Two more, “The Lives of Dahlias” and “The Dark Leaves.” continue in the same vein.

For the “Norton Island Visions” series: The individual archival paper prints (11 by 8.5 inches, signed and numbered edition of ten) sell for $150 each. The works also print beautifully on aluminum, she says, in an 18- by 24-inch format and are ready to hang with a floating wall mount. All the other series are aluminum prints only, at different sizes, from $200 to $400 each.

During the learning curve of building her online shop, Fry added other sections of unique works on paper and small sculptures. Prices range from $95 to $1,900. To see more, click on Fry’s shop here. 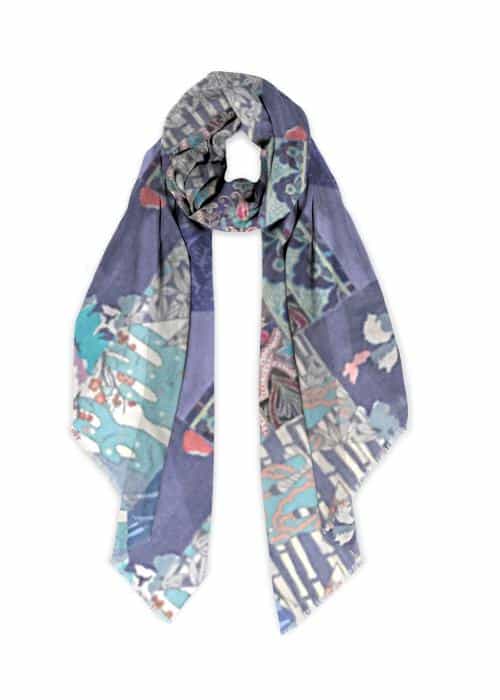 Vasari21 members Suzanne Silk and Annie Shaver-Crandell both work with an organization called Vida that connects artists and artisans around the world. Shaver-Crandell’s pastels and paintings, mostly still life and flower studies, adapt well to the checklist of items Vita produces, such as scarves, small handbags, racerback tops, and pillows, and the merch is affordably priced at around $50. Silk has designed a more extensive line of goods, including cell-phone covers, greeting cards, glass trays, leggings, and oven mitts. “Vida’s business model is fairly straightforward,” reported an industry journal called Fashionista. “Instead of sample garments, designers submit sketches and patterns to be scanned and digitally printed onto scarves and tops by Vida’s six manufacturers, which are based in India and Pakistan. That means the whole process is fast. An item can go from sketch to completion in a week.” The “creatives” get a 10 percent cut of each sale. 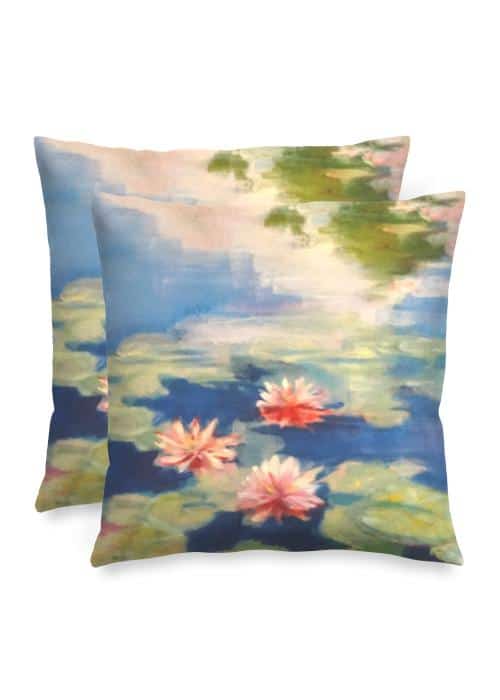 “My assistant set everything up,” says Shaver-Crandell. “The work is very nicely executed. I wouldn’t call it a great success, but I’ve had a number of sales. And now I have a nice scarf collection. We’re figuring out a more aggressive way to market things. It does get the work out there in a form that people can have on the body or carry with them.” (A selection is here.) 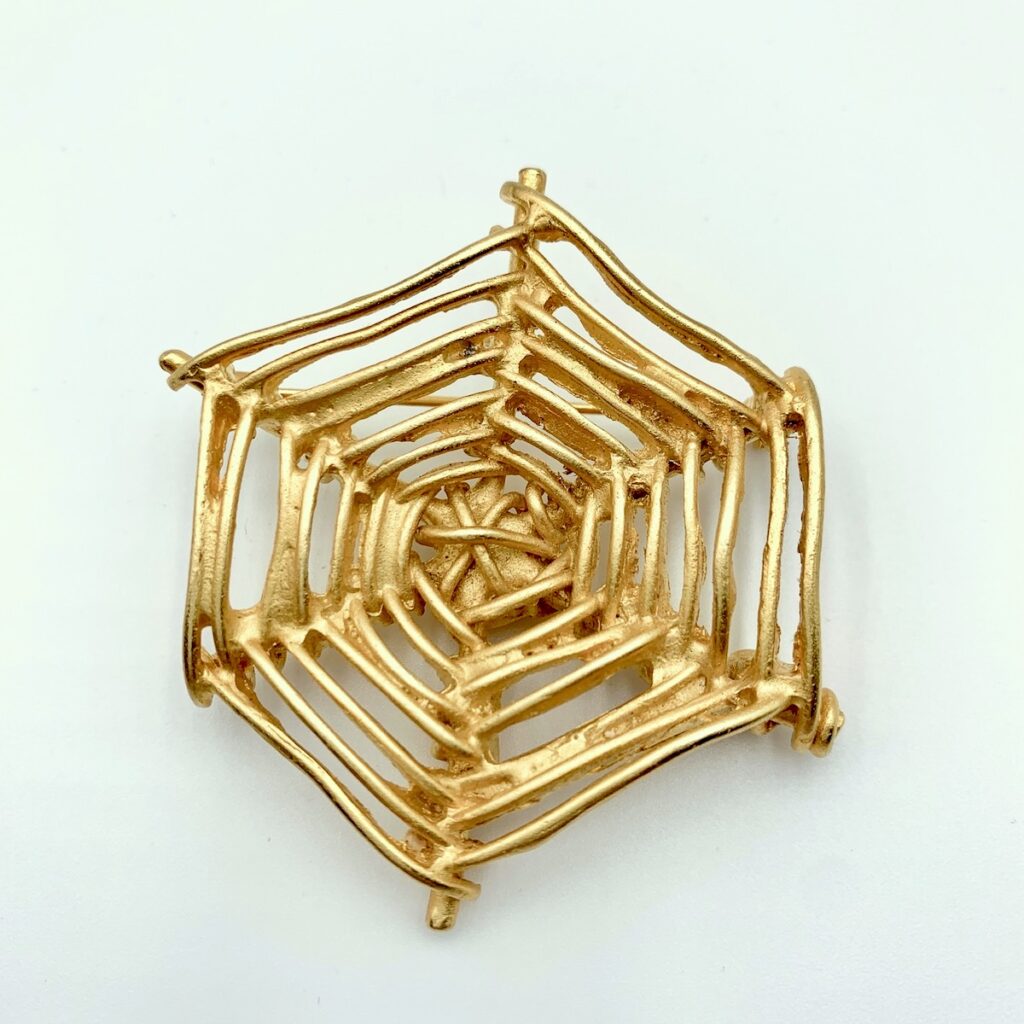 A spiderweb brooch from Sunny Chapman

And, of course, there are always one-of-a-kind items at a lesser price point than your more ambitious originals. In the 1970s and ‘80s, Sunny Chapman made and marketed jewelry in Chicago and Sant Francisco, mostly at crafts shows. Then she teamed up with a jewelry rep and sold to department stores until, she says, “the jewelry business took over my life.” She decided to “retire” and get back into making art, but recently discovered a trove of items from those years and now offers them on her website. The brooches are abstracted shapes, reminiscent of snakes, leaves, and spiderwebs, and are cast in pewter-based metal from models she sculpted in the ‘80s. Plated in 24-karat gold, rhodium, or sterling—some in a dark antique finish—they sell for a modest $24 to $29. She’s also venturing into glass and “doing really well” with a gallery in Kingston, NY.

While watching late-night talk-show hosts broadcast from home during the pandemic, sculptor Gina Telcocci took note of the tchotchkes in their offices. “I found it fascinating,” she says, “What they had on their walls and shelves. Funky pathetic little objects. So I thought, Can’t they come up with something better?” 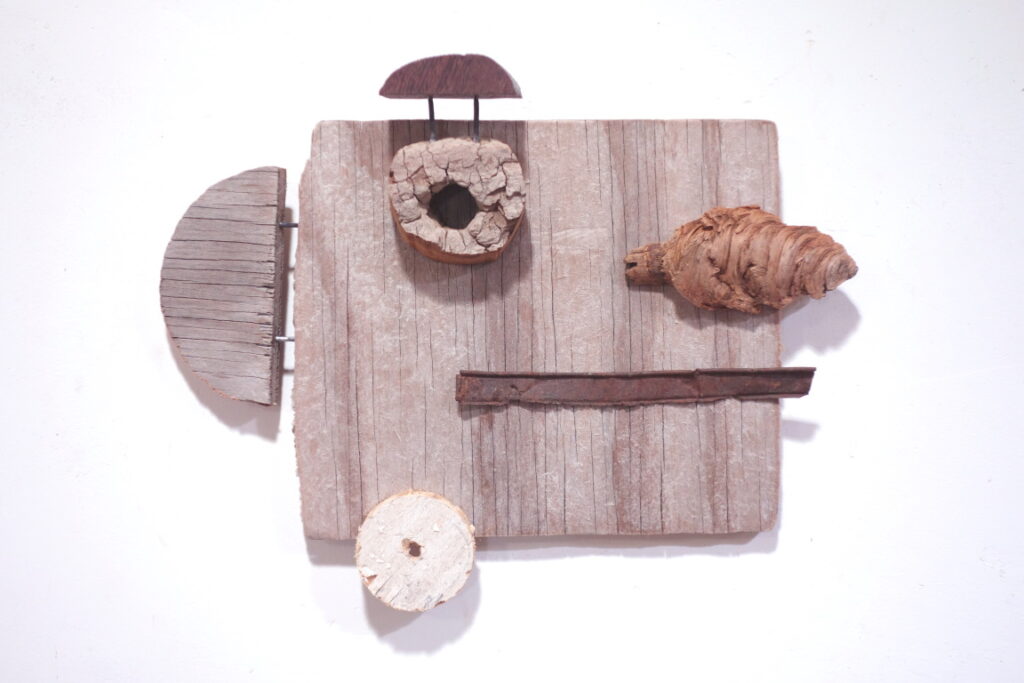 Gina Telcocci’s Mover-Shaker, mixed-media and a steal at $95

So she now has a “sculpture shop” on her website, where she sells “little sculptures  made of driftwood, fragments of cupboards, wrecked boats, tools, and manufactured objects, bits of rusty iron, shredded exotic organic matter—the things that wash ashore from who-knows-where on the planet,” as she says on the site. “The materials themselves trigger my imagination about unknown characters and adventures at sea. All of them can be hung on the wall; some can also comfortably sit on a shelf.” Prices range from a very reasonable $55 to $125. For $225 to $285,” she also offers “Shelfies,” slightly larger sculptures made from natural materials like reeds, copper wire, mud, paper, and wax.

Sales for all the artists interviewed have not been through the roof, but most of these are new ventures. Below, Annie Shaver-Crandell’s assistant, Alexandra Kamins, offers additional information on two outlets for artists, Etsy and Vida.

To sell on Etsy, an artist needs to create an account and shop. The website will guide the artist in listings, where they are encouraged to include multiple images of a piece and provide details.  Etsy charges 20 cents per listing per month, and artists keep any further profit.  On Etsy, an artist is able to list whatever she would like, but all products must be developed, stored, and shipped by the artist herself.

To sell on Vida, she also needs to create an account. From here, she will be given options of basic designs to apply to the work—these range from ready-to-wear to household goods. The artist can then upload an image and adjust it on the design as she see fit.  After she previews and confirms the design, it is listed on Vida.

Both Vida and Etsy offer paid promotions for individual sellers.  For Etsy, there are tiers of advertising that range between $1 and $25 per day, which will prioritize your listing (i.e. have it show up on the first page of a relevant search) The website FAQs about Etsy advertising here.