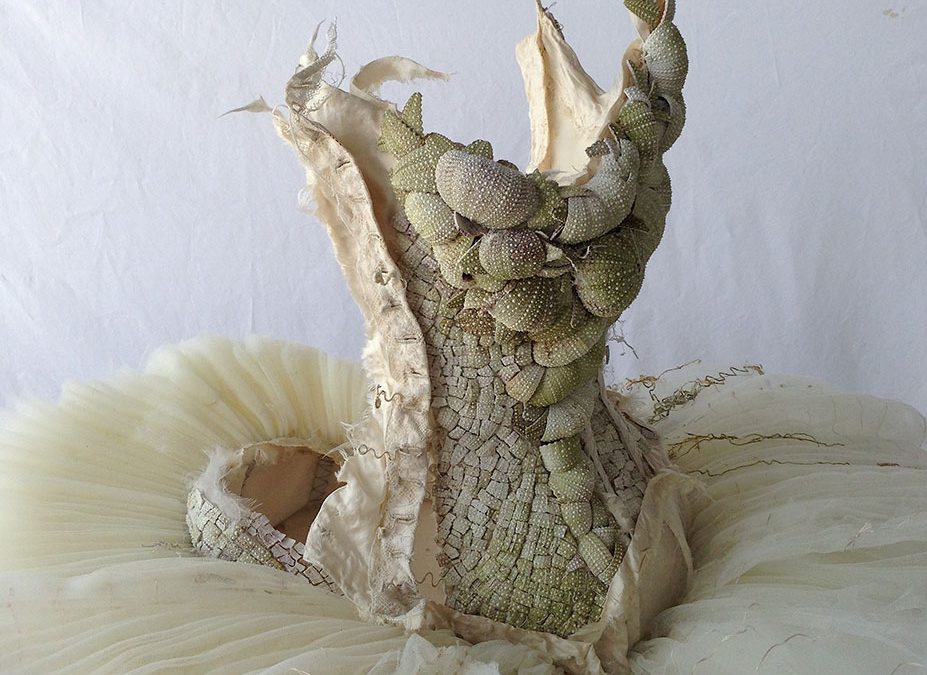 The results can be ravishing, brutal, and downright mesmerizing

Fashion has been colliding with art at least since Tristan Tzara and other Dada provocateurs took to the stage of Zurich’s Cabaret Voltaire a century ago, wearing outlandish costumes created in the same anarchic spirit as the movement’s poetry and art. A decade or so later, legendary designer Elsa Schiaparelli, after rubbing elbows with Jean Cocteau and Salvador Dalí, invented a “Lobster Dress,” an “Eye Hat,” and another fetching chapeau shaped like a shoe.

Closer to our own times, Nick Cave’s spectacular Sound Suits—adorned with sequins, doilies, fur, toys, and other improbable embellishments—could be said to straddle the worlds of performance, art, and fashion. Among E.V. Day’s “Exploding Couture” projects was the transformation of 13 of the Metropolitan Opera’s costumes into an extravagant installation known as Divas Ascending. The British-Nigerian artist Yinka Shonibare has made a name for himself with sculptures that pair headless dummies with “Africanized” clothing.

And the list goes on. Can fashion be art? Art fashion?

I use “fashion” in a very loose way, far removed from the world of haute couture and Vogue magazine, because when artists approach clothing, costume, apparel, or whatever you choose to call it, the results generally provoke a different response from the applause that greets a well-clad model on the runway.

Noting that at least three members of Vasari21 are in one way or another involved with “sculpture” that references apparel, I zoomed in for a closer look at how artists are borrowing and transforming the language of clothes.

Michelle Cooke’s series “Vesti,” made between 2009 and 2012, evolved from the artist’s fascination with found materials—things like smashed bottle caps, bird feathers, even several yards of steel mesh from a dumpster.  ”Those led me to want to make sculptural forms, to use these artifacts in a way that was about sculpture, not collage,” she says. “Because the materials looked like fabric or like a structure, I could see them made into a dress or a T-shirt or whatever form occurred to me. I eventually realized I was making clothing, clothing out of materials that could not possibly be worn.”

To these rough and sometimes dangerous materials, Cooke added more enticing embellishments: seashells, lace, and chips of precious and semi-precious stones. Her Kimono, for example, is made from steel mesh hammered to lie flat, and is lined with copper and woven with chips of emerald and red jasper. Shell Bag features seed pearls and abalone shells, but its handles are made from bandsaw blades and inside are bullet-shell casings. And Butterfly, floating as airily as a dream, is spun from aluminum, glass, and garnets.

Cooke had no particular feminist agenda to address, but after working on the series started to think about the constraining nature of women’s apparel: bras, girdles, corsets, pantyhose. A filmy-looking piece called Armor, for example, could almost be at home in a Victoria’s Secret catalogue. “Nothing I made could be worn or carried, but they all had that look like they could be on a shelf at Barney’s, glittery and seductive,” she says. “My approach was to use these materials to make something that is in a way feminine and beautiful, but the basic elements are dangerous and uncomfortable. I got hurt a lot in making these things—they’ve probably got some dried blood on them.” 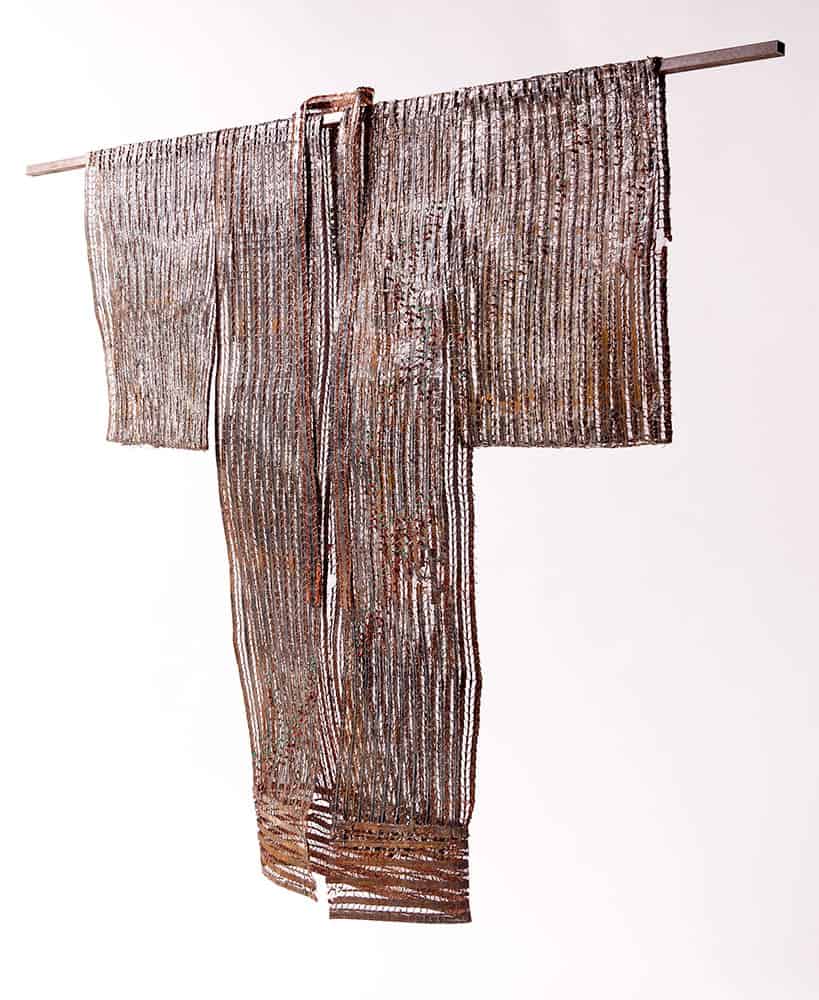 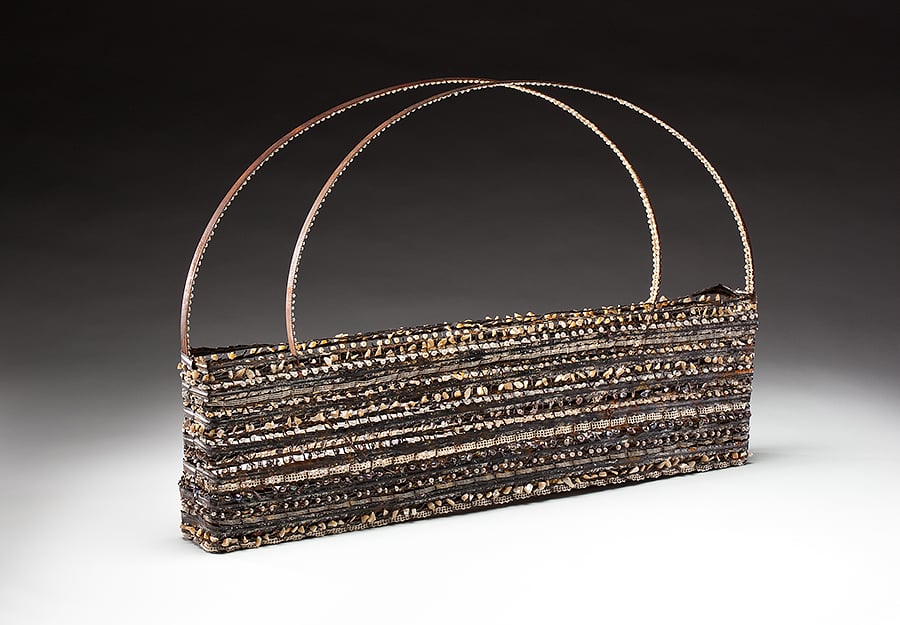 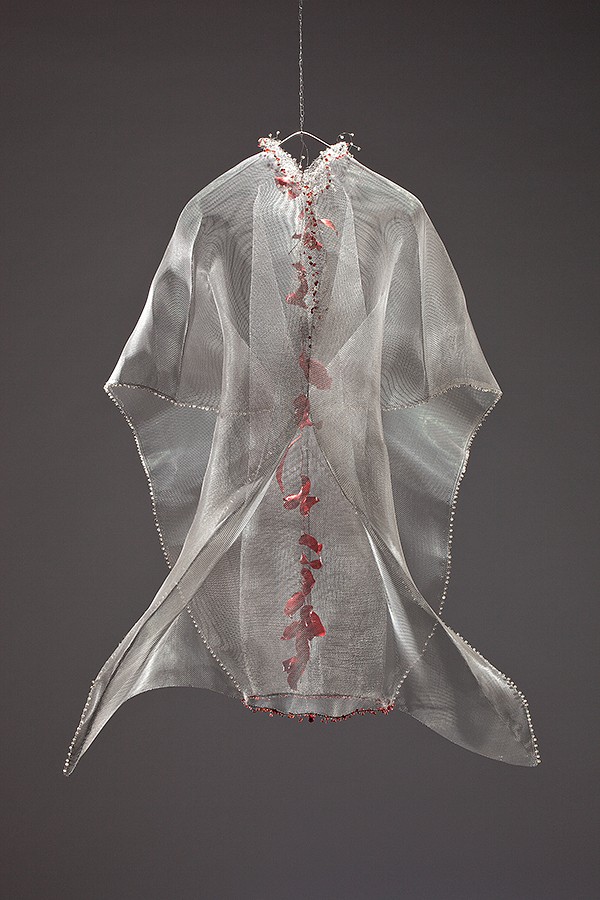 Catherine Latson’s sculptures also start with materials, but in her case she looked to the natural world—tapioca root, magnolia leaves, sea-urchin shells, moss, amaranthus, hydrangea petals, and peacock feathers—often to create improbably glamorous garments that in some cases can be worn. Many, like Adrift, look “partially decomposed, as if they’ve lived a life,” she notes.

The first pieces in the series were wall-mounted and almost child-sized. The later works, such as The Marigold Gown and Dancing with Death, stand alone, like couture gowns from a costume-institute display and are as frankly glamorous as old-time Hollywood evening dresses designed for high-wattage femmes fatales. In fact, Latson’s background as a scenic artist may inevitably factor into her creative process. “Costumes were fascinating to me because they have to have a high level of functionality.”

“When I’m working on one of these,” she says. “I start with the materials and then I just let go. I get to know this creature that I’m building, and when people see the final work they bring their own stories. The clothing has a human side to it.”

At the moment, and still in the sketchbook stage, Latson is envisioning a more elaborate installation. “I’d love to create whole mini-set, a store window.” 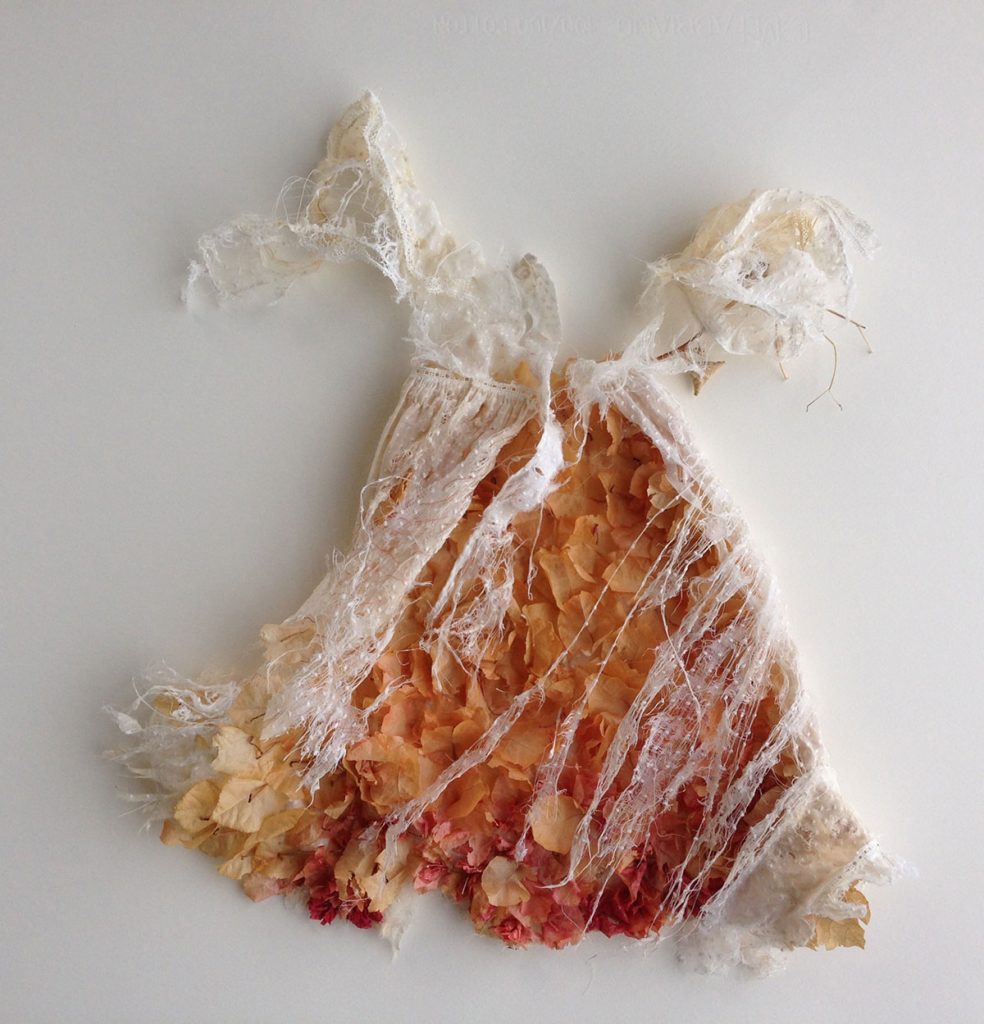 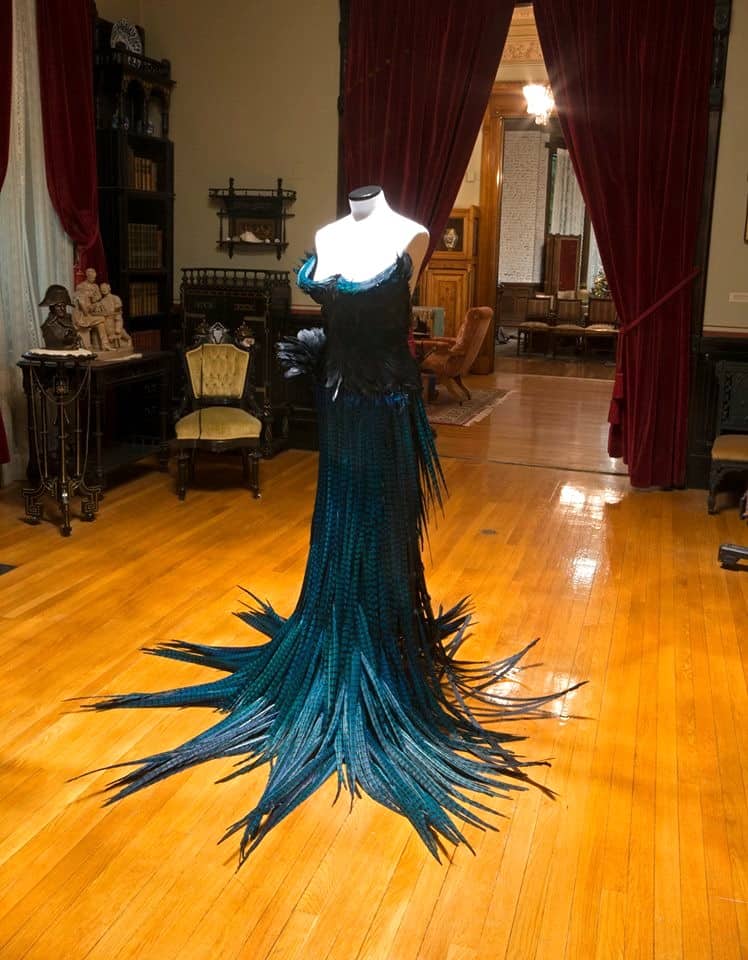 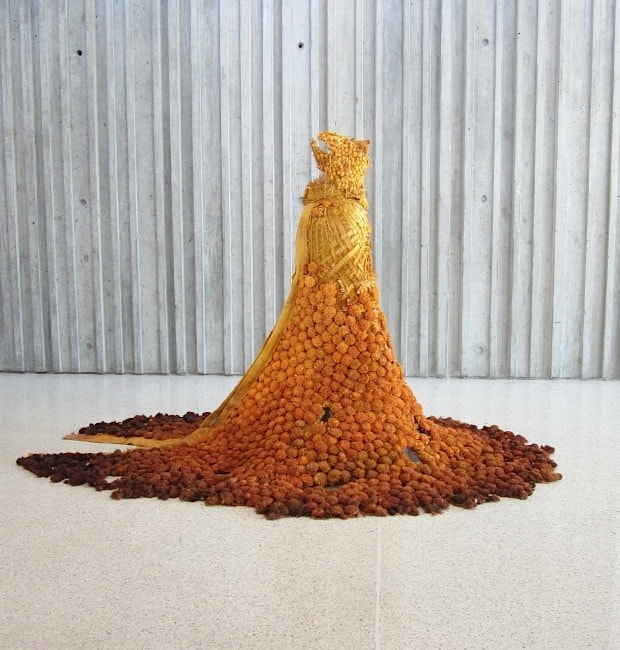 Like Latson, Bonnie Collura finds a storytelling impulse in her work, but her narrative is more elaborate and has been building for over a decade. Inspired in part by Mary Shelley’s novel Frankenstein, “The Prince Project” is a series of installations that roughly trace a character’s evolution from a mythical Golem (a being made from inanimate matter like clay or mud) to its final apotheosis as a heroic figure, what Collura describes as the “shell of an ideal man built out of different characters.”

The Armor for White Light is the latest and most sensational of the unfolding “chapters” and it’s made from 10 layers of custom-sewn muslin. Collura had studied Samurai armor in the Metropolitan Museum of Art, and was intrigued by the way these show “how to dress for battle with full pomp and circumstance.” The small “plates” that encrust sections of the wearable sculpture are sewn paper strips cut from airbrushed drawings the artist made between 2002 and 2012. “The bits of drawings,” as she explains on her website, “represent the scaling textures that are often seen in Samurai warrior armor.”

To make the armor,  Collura enlisted the help of a student who knew how to sew and tailor garments. “We made the starting layers with the notion that it would be a performative work,” she says. “There are ten layers—the armor has underpants, skirts, a chest plate—and when I put on the layers I can move with them.” The short video posted here, a link to chapter one only, gives an idea of how compelling the piece looks in action (a longer video will be up and running shortly, and a performance will be part of the show called “Prince” at the Smack Mellon project space in Brooklyn in early 2019).

“I love working with the figure,” she says. “But figurative sculpture can often be taken for granted. It’s the starting point to think about sculpture, the way you have to build a sculpture from the inside out since the outside has to reflect all the complexity on the inside. That’s why I like to work with fabric. I gravitate to things that have multiple explanations, and the material shows me what a form can be beyond gravity and space.” 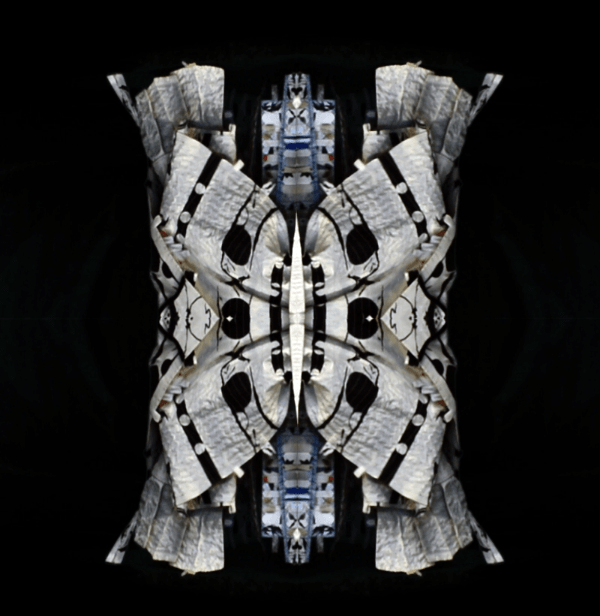 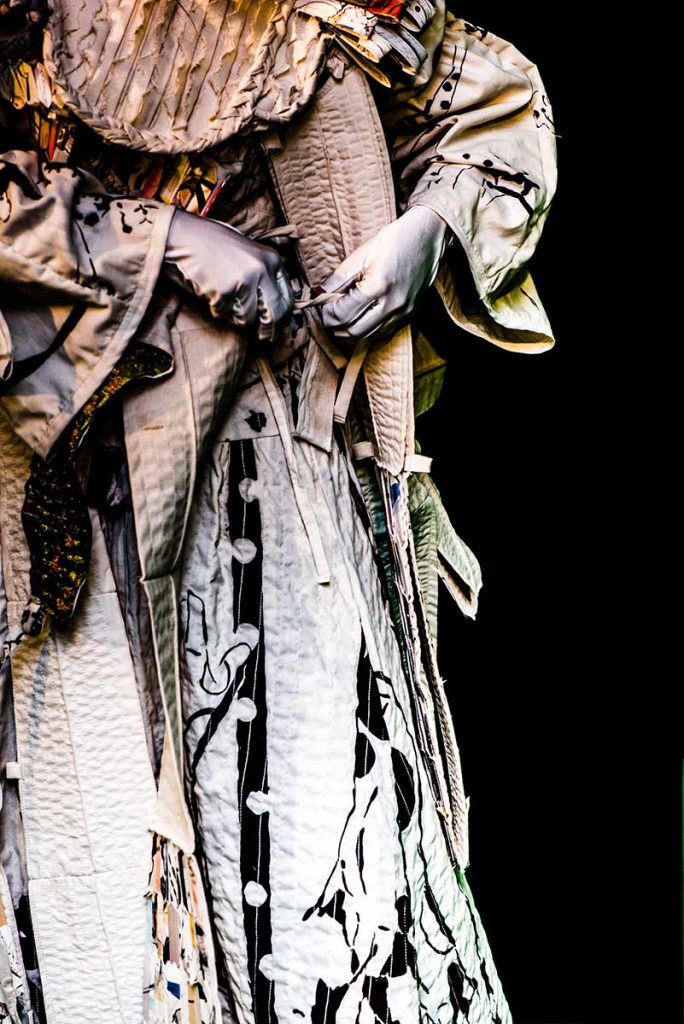 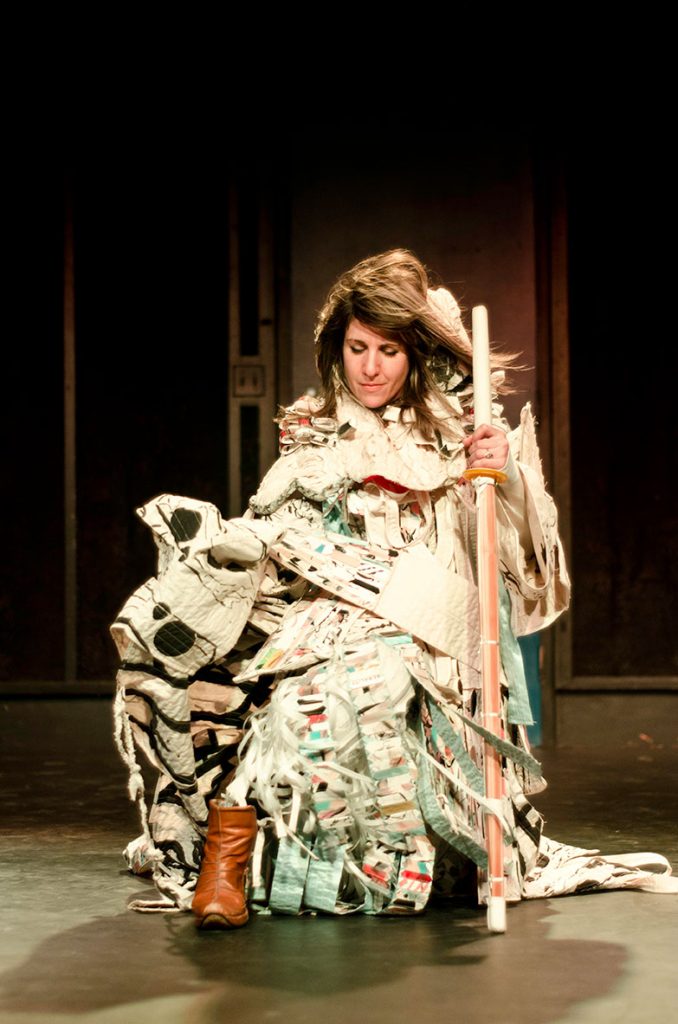 Collura performing in the multilayered Armor, inspired by Samurai design

Photo credits for Bonnie Collura: video assistance by Sidney Mullis. Photos:
Tying Armor for White Light: Anna Margush. Performance photo: Eric Margusity
If you like what you’re reading, please consider supporting this site. For as little as $25, you can become a member and enjoy eligibility for Vasari21 Pics of the Day on Facebook and Instagram, as well as inclusion in the weekly newsletter when you have news of shows, prizes, and other accolades to report. Your contributions allow us to remain ad-free, so you never have to deal with annoying pitches while you’re on the site—except, of course, for this one! Click here to show your support.