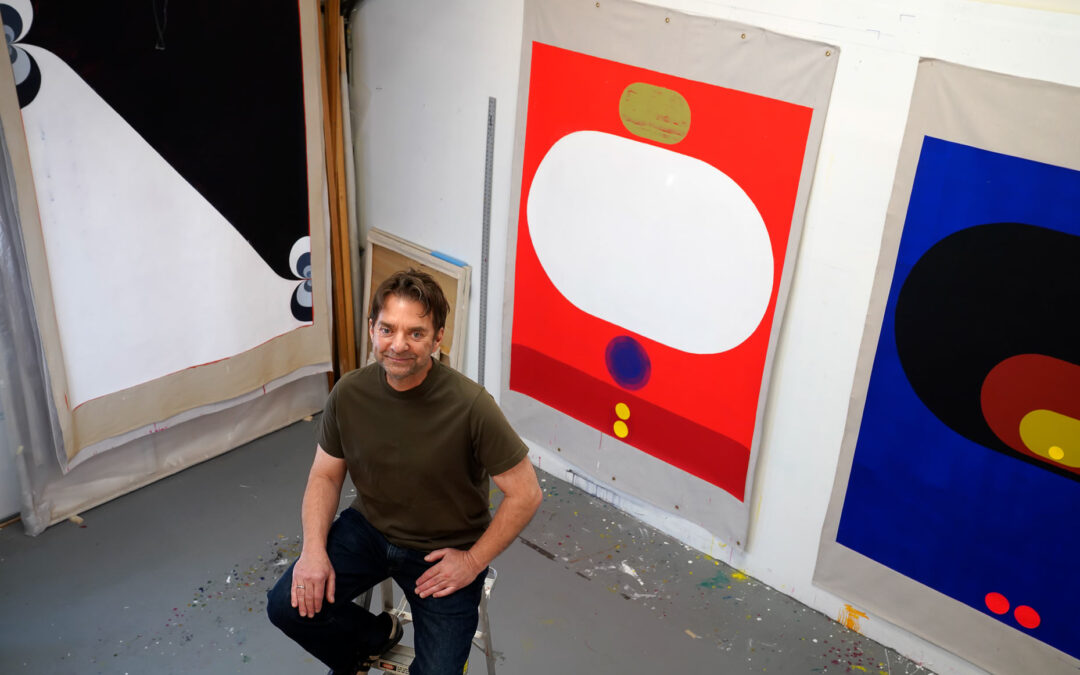 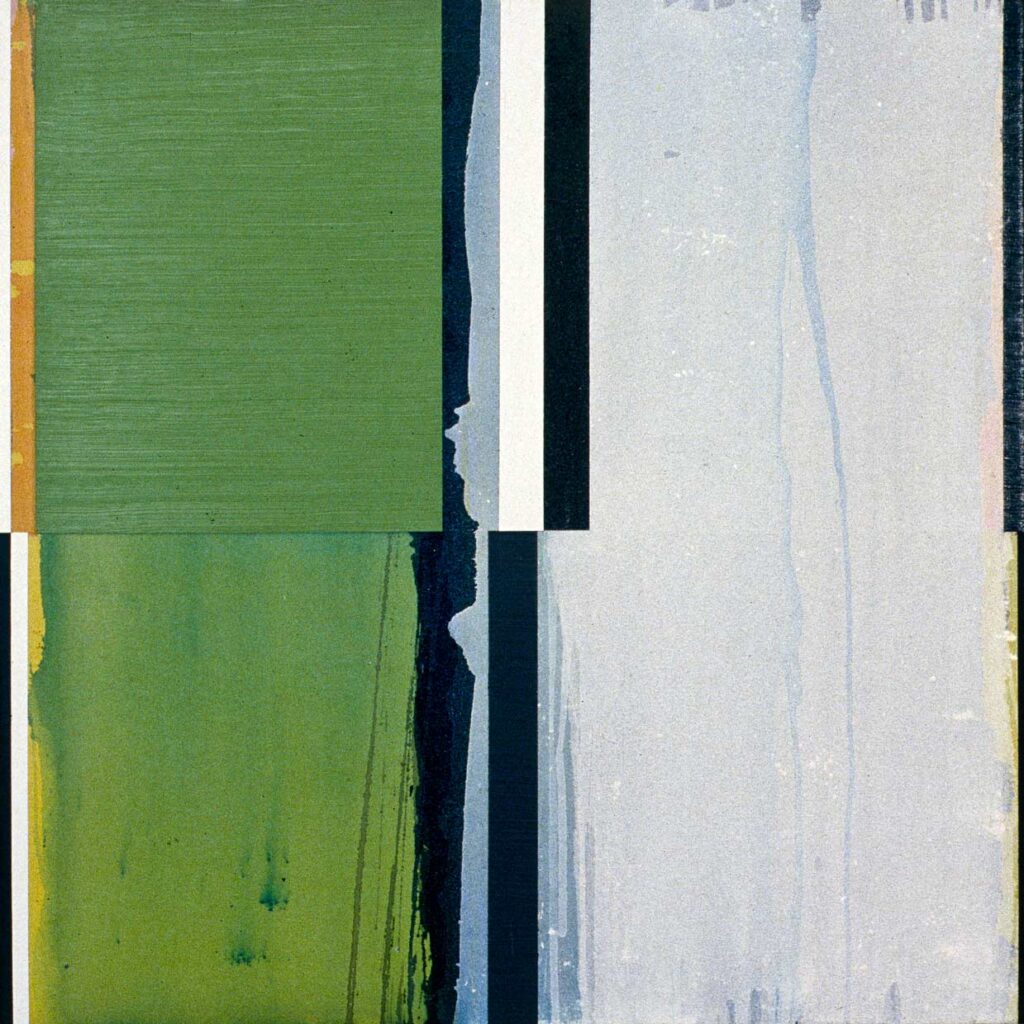 Tom Martinelli’s artistic journey might be said to begin with a real journey, when he and some friends repurposed a New York City school bus and drove it west as far as Tucson, AZ, in 1971. Seventeen years old and just out of high school, he and his sidekicks were on a spiritual quest in the great tradition of Ken Kesey and Jack Kerouac. They ended up spending time in Tucson because there was “a lot of spiritual, countercultural stuff going on,” he recalls. “Ram Das would come to town. Yogi Bhajan had a residence there, and a lot of ex-Timothy Leary disciples were around.

“People would come aboard for sometimes days, weeks, and then they would be gone,” the artist recalls. “We were explorers by nature and still young enough that concerns about the future didn’t exist. I think we pulled off a wonderful and rich odyssey.” 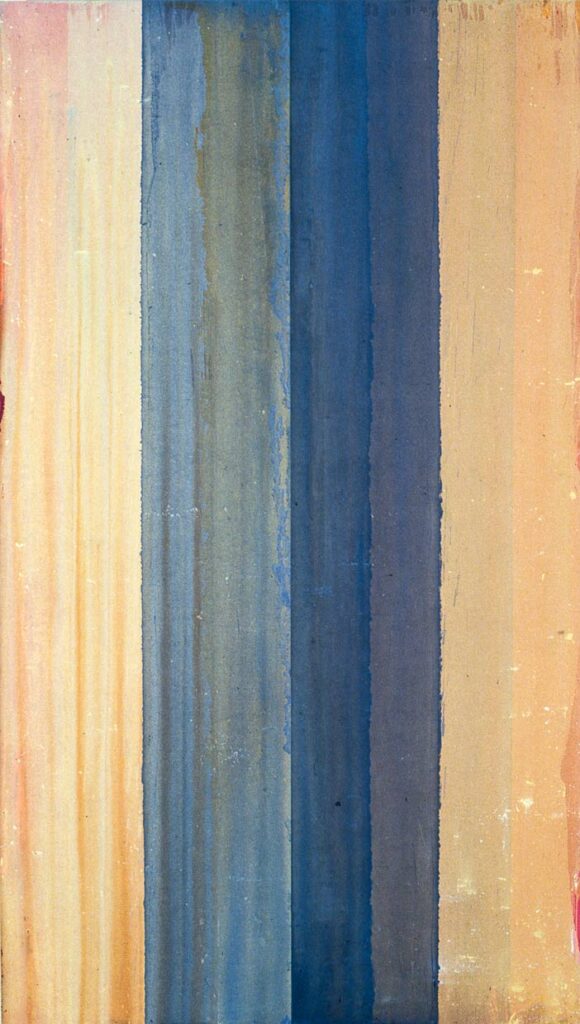 But after a year Martinelli had had enough and decided to hitchhike home to Queens, NY, where he discovered that he had lymphatic cancer. A year of treatment followed, during which he determined to go to art school, first at Hunter College and then at the School of Visual Arts, which “was much more glamorous at the time,” he says. “And it was cheap.” The school started with the goal of teaching commercial art and then expanded to fine arts.

Martinelli took another year off after earning his BFA and then headed back to Hunter for graduate work, where he had the good fortune to encounter teachers and mentors like Ron Gorchov, Sandy Wurmfeld, Ralph Humphrey, and others dedicated to the emotional and formal possibilities of abstract color painting.  Gorchov, in particular, made a lasting impression. “He once said to me, ‘The human body has no concave surfaces. If you look carefully, it’s all convex. It never really folds in,’” the artist remembers. “Even when it looks like it’s folding in, it’s actually curving outward. Now, looking at his shaped canvases, there’s always something about the body and its curvatures.” 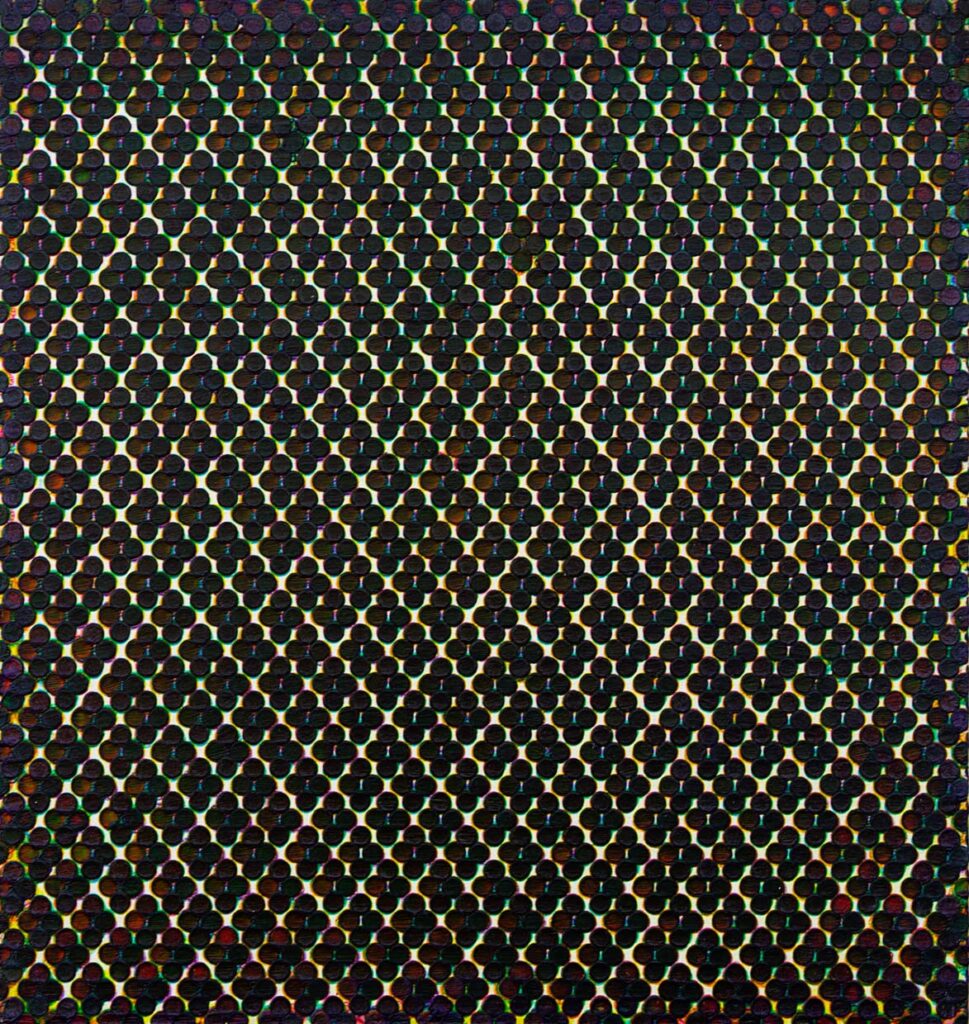 While still in school, Martinelli was living la vie de bohème, first in Park Slope and then in Williamsburg, where he had an apartment and studio right under the Williamsburg Bridge. “At that time I was making very big abstract quasi-landscapes,” he says. “They had a certain urban quality, a lot of touch involved, and they were sort of endless, I would just keep working on them and working on them. They were very touch oriented, somewhat like Philip Guston’s abstractions.” 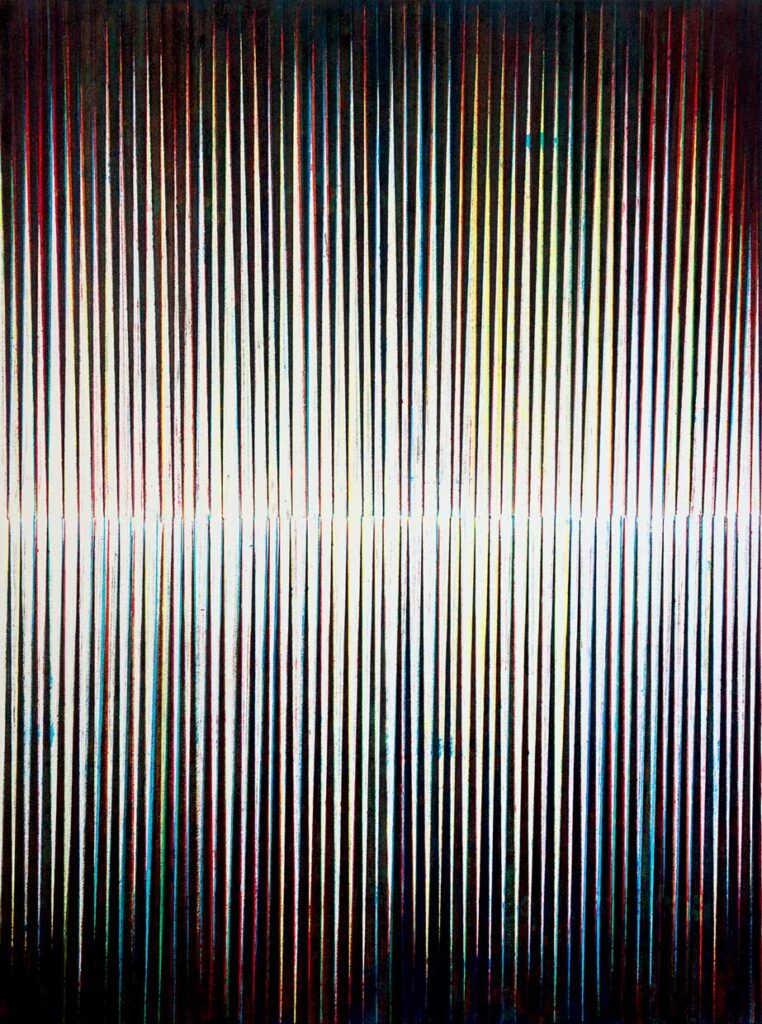 The work changed in graduate school when he “started making paintings that had a little more of a constructed feel to them. I would use layers, so that when they were done, they were done.” He started to show his work in the late 1980s and early ‘90s, and one painting in particular, Sunday Suit, still in his Santa Fe studio, “earned prolonged viewing time from Robert Ryman.”

To support himself he was teaching at Hunter, doing computer graphics, and also working for a small decorative arts company that had the distinction of helping to revamp the Plaza Hotel after Donald Trump bought the building. It was in the early ‘90s, he says, that he began to feel like he like he was coming into his own.  “They were stained, so there was a certain amount of lack of control going on,” he recalls. “I did them as small as twelve inches and as large as ten feet. I wasn’t really looking at anybody else too much. There was no hesitancy, no doubt.” 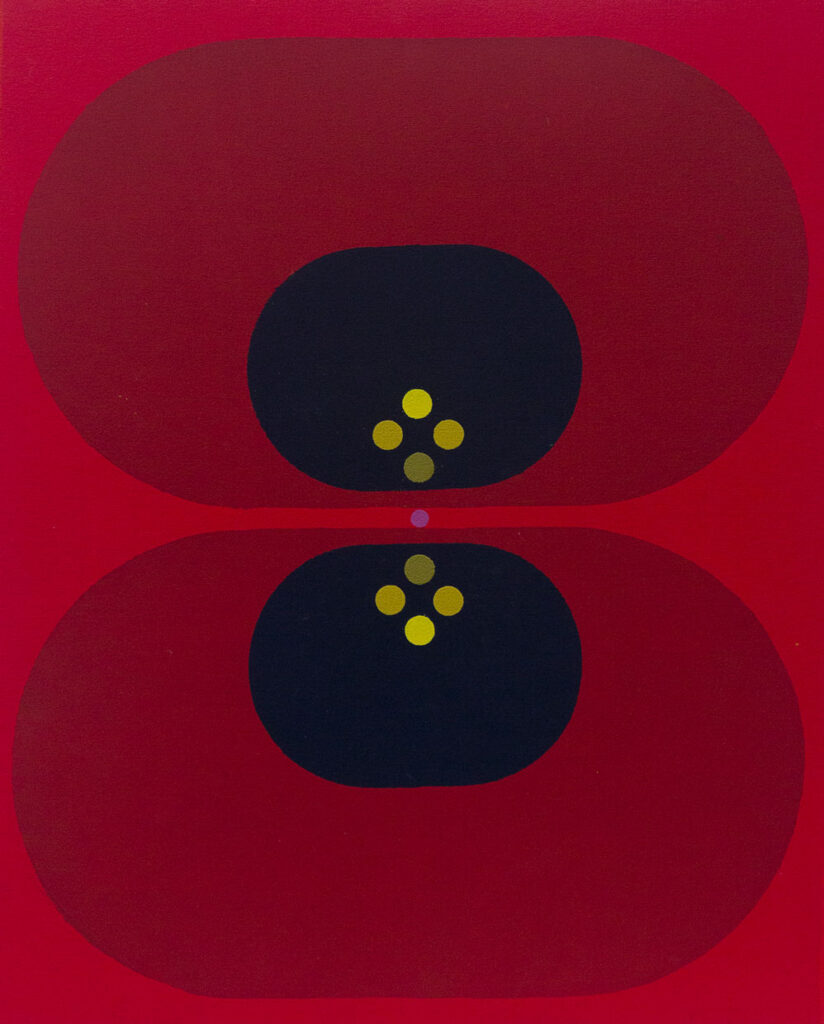 His earliest dealer was Julian Pretto, and the first time he showed one of paintings he earned a notice from the late critic  Vivian Raynor in The New York Times. “For me, it was like heaven.”

In spite of gaining a foothold in the urban jungle (not an easy feat for any artist), by the early aughts Martinelli was asking himself: “Am I ever going to leave this place?” He’d grown up in New York and had reached a point where it was time to change lanes. “What I label a spiritual life has always been important to me,” he says. “I got into meditation from a pretty early age. That might have started in Tucson with the bus trip. In high school we all read Autobiography of a Yogi. That was the first glimpse into this possible other world that exists.”

In 2002, he headed for a meditation retreat center in the Catskills, intending to stay for a year, and instead wound up living there for four years. He had a small studio and a job overseeing the digital archive, but by 2006 the wanderlust kicked in again, taking him to Santa Fe, where he lives now. 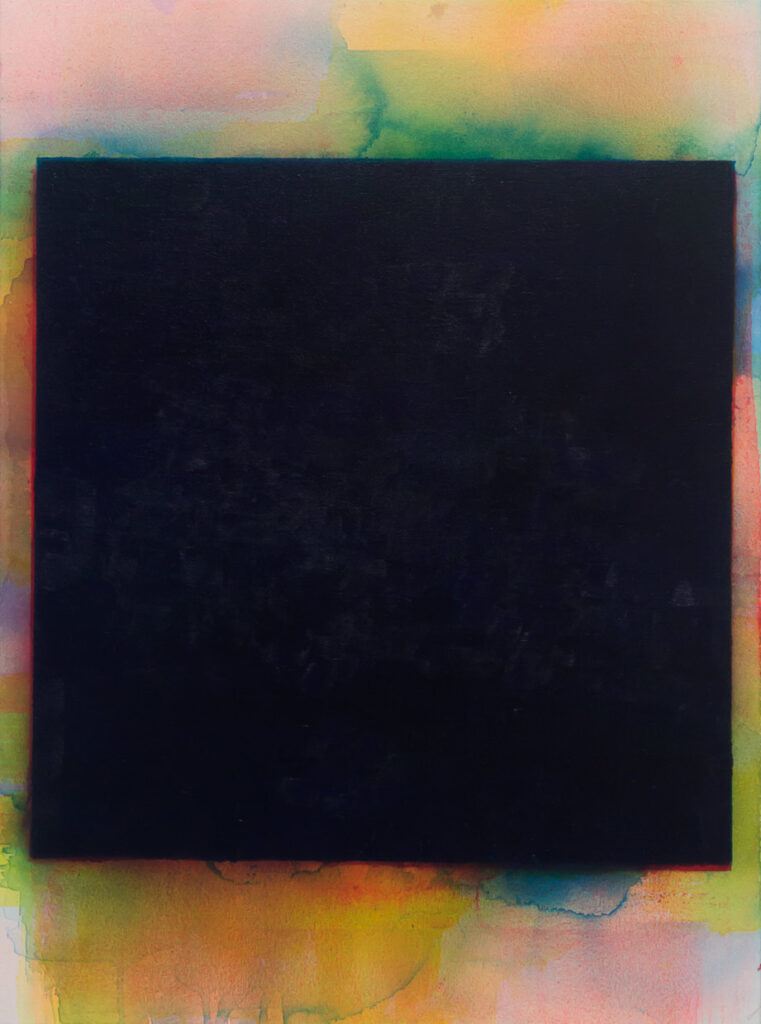 “Why Santa Fe?” he asks. “Once I got out here, stuff started to happen out of the blue. In Albuquerque, a meditation connection he was staying with introduced him to an “outsider” dream analyst named Alvaro, who was “doing all this dreamwork and was very well known to Hollywood people.” After the artist helped put his digital life in order, he went to work for a tech company in town and then lived for two years in Agnes Martin’s former home and studio in Galisteo.

“I ended up becoming very good friends with Nancy Holt,” he recalls, “helping her with different projects and working later with the Holt-Smithson Foundation after Nancy passed away” 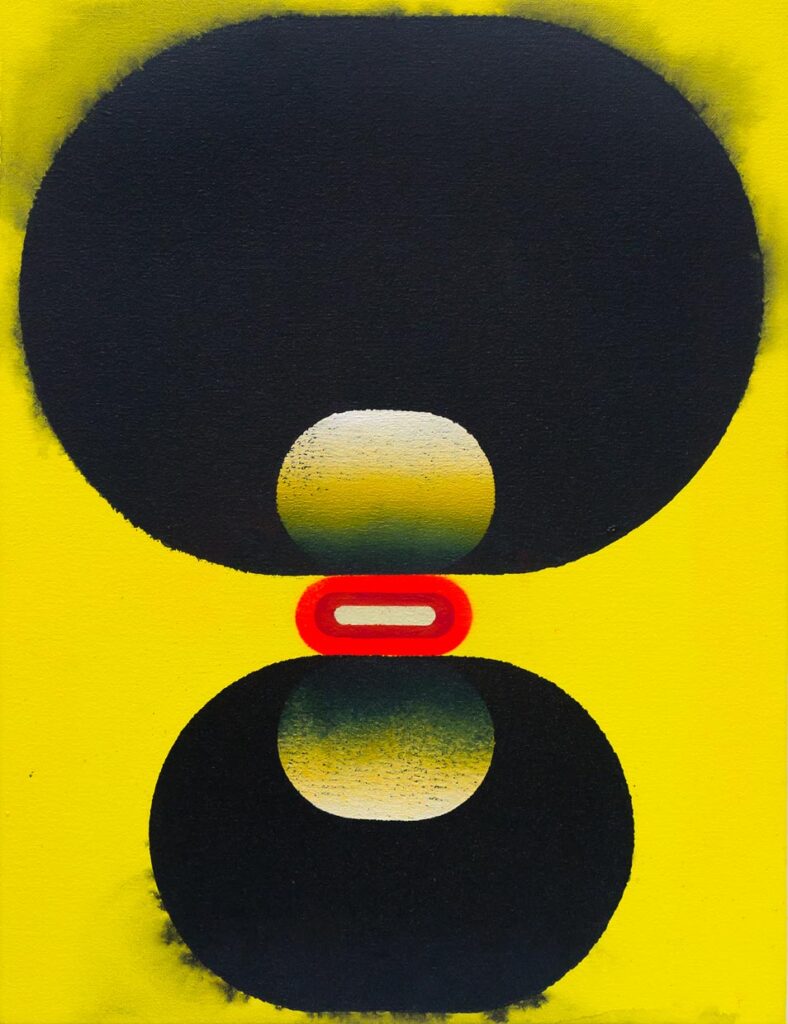 In the early ‘90s he developed a process that involved staining in vertical stripes (his colors had a rich earthy quality that distinguish his canvases from the legions of lyrically inclined painters working in the Frankenthaler/Louis staining idiom). By the middle of the decade, the paintings were based on grids, overall fields of circles and trefoil shapes that have a strangely hypnotic quality—they are not quite Op Art, and not quite Color Field.

Not surprisingly, much of Martinelli’s work for the past 25 years has a deeply meditative quality: Ovoid shapes float serenely against black or brightly hued backgrounds, often stacked on top of one another, embracing buoyant circles or sometimes bleeding beyond their perimeters. He has lately returned to a formula and a format that engaged him about six or seven years ago. Layers of translucent paint are applied to the ground, one on top of another, until a black rectangle emerges in the center. 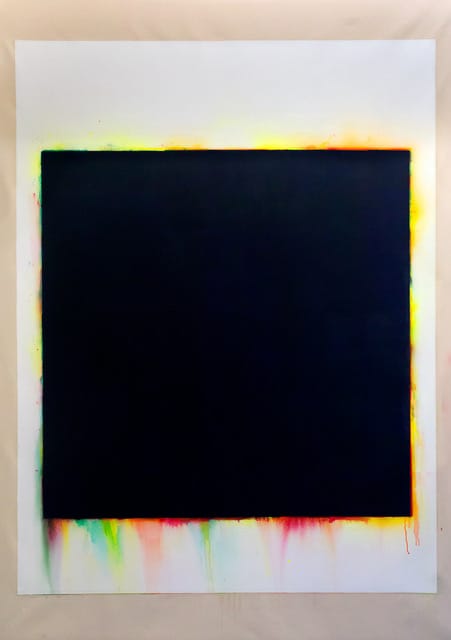 Last summer, he pulled these works out to look at them again. “These are really fun to do big,” he says. “But you get into nine-foot stretcher bars, and that’s difficult and expensive. I think I’m going to keep these unstretched and unframed. It’s almost like working on a sheet of paper. There’s a fluidity to the object. I’m reconsidering: What have I been doing with all these things?”

Martinelli has a substantial body of work crammed into relatively small quarters. The earlier paintings, in particular, pay homage to their roots in a kind of systemic painting that became popular in New York three or four decades ago. And yet, as with the best works of that time (Gorchov’s, for instance), the paintings still look remarkably fresh.

“I am doing some re-exploring of system- and pattern-based work,” he says. “In this period of high anxiety in the U.S., I’m feeling a pull towards a studio state of mind and body that incorporates more flow and motion. This might be simply a response to the current difficult times. I’ll just have to work it and see.”