The Studios of Key West 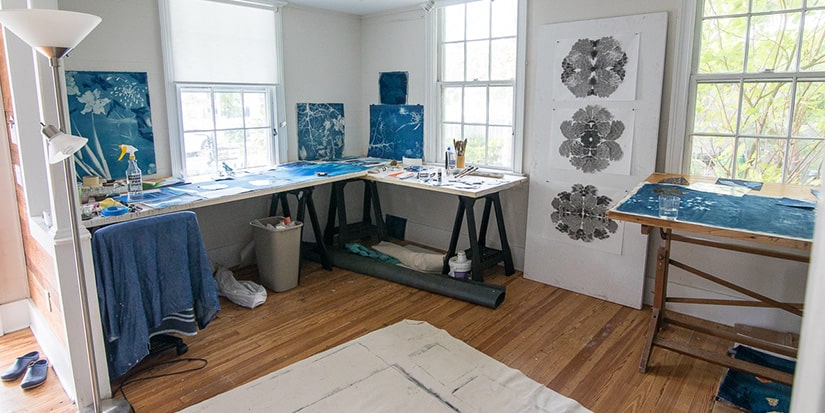 Why Not Consider a Residency in the Tropics?

Key West is a town unlike any other in Florida, an island city that marks the southernmost point in the United States. A stone’s throw from Cuba, it’s the end destination of U.S. Route 1, the longest north-south road in the country—a gorgeous drive from Miami but also easily accessible via major airlines.

Recent artist-in-residence Jean Pedersen in her studio at TSKW

The town is notable for its distinctive conch architecture, established by immigrants from the Bahamas and characterized by timber framing, large windows, high ceilings, and louvered shutters. Ever since Hemingway set down roots here in the 1930s, Key West has been a mecca for writers, but it also boasts a lively and thriving visual arts community, in large measure anchored by the organization known as The Studios of Key West. 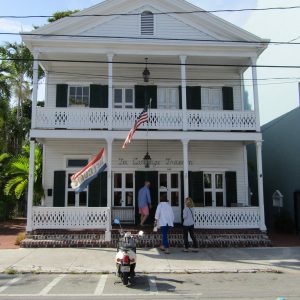 The new building on Eaton Street

Headquartered in a sleek Miami Deco building downtown, TSKW plays host to about 36 residents a year, in various disciplines, from writing to composing to art making. About three or four have found accommodations in cottages on Ashe Street since the program started in 2007, but the organization has just acquired a historic guest house adjacent to the main facility that will be home to the artists-in-residence program starting in June of 2019 (which means renovations will be taking place around the artists and writers, and then from about October to mid-December the program will be on hold while more significant upgrades take place). 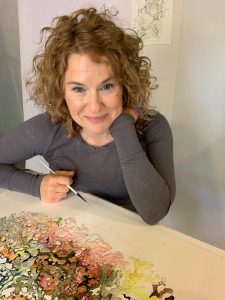 The three-story main building, meanwhile, continues to be home to a 200-seat auditorium, classrooms, the island’s largest gallery devoted to contemporary art, nine studios for practicing artists, two dedicated classrooms, and a cutting-edge digital media lab. A rooftop garden terrace, with spectacular views of the island, is slated to open soon.

Jed Dodds, executive director of TSKW, says that the residencies were the brain child of Peyton Evans (by coincidence, a colleague of this writer’s from way back to our time together on a magazine in the 1980s), who “was aware of Anderson Ranch and felt that Key West needed something similar,” he says. “She gathered a dozen or so artists and sent them out to participate in different residencies and then come back here to build something similar. In the early days, the program was informal, serving the dual function of introducing artists around the country to what a great place we have here and raising the dialogue and expanding the vision for TSKW.” 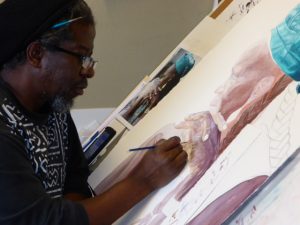 The program is especially interested in artists who might benefit from the lush tropical surroundings and diverse community that make Key West so attractive to residents and tourists alike (and be warned you will see hordes of the latter when cruise ships dock during high season). Suzanna Fields, for example, a resident there in March of this year, relies on what she calls “idiosyncratic forms drawn from natural structures” for her drawings, paintings and collages. So she was attracted to the “very watery” natural environment of the keys. “I am finding that after I got back [to her home in Richmond, VA] the things I responded to are starting to bubble up—the animal life and natural forms, are recurring and sticking with me.”

William Kwamena-Poh had a longer residency in 2014, and went to Key West with watercolors he wanted to finish. Born and raised in Ghana, Africa, he says Key West reminds him of his native country because “the foliage and temperature felt very familiar.” 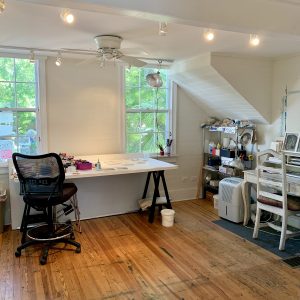 Expectations of artists in residence are varied but part of the application process, which can be accessed here. Typically, artists offer studio tours and workshops (or performances and readings for those in other disciplines). “I did a workshop over two days,” says Fields, “and the studio was almost to capacity, everyone from a nine-year-old to a 90-year-old.”  Kwamena-Poh also held a workshop, teaching watercolor to residents of Bahama Village, an area of Key West with a number of African-American children. Resident artists are also expected to be on hand for local openings, which offer a chance to meet and mingle with the community. At some point during the month there’s a potluck dinner, another chance to get to know Key West natives. The facilities include a shared kitchen, and artists are mostly on their own at mealtimes (the area abounds in stores, restaurants, and bars, and the island is easy to get around on just a bicycle or on foot). There is a $40 application fee; residents are responsible for transportation, supplies, and other incidentals (TSKW will also provide a bike).

If you are looking for the sort of residency that offers after-hours exchanges and networking with other visual artists, this is probably not the ideal situation, since at most about four creatives will be on hand during the month—and the others will most likely be musicians, performers, and writers. But if you crave some solitude in a tropical setting, along with a chance to rub elbows with a varied palette of local artists, TSKW affords a retreat to test out new ideas or continue projects in one of the most congenial spots in the country.