The Other Art Fair 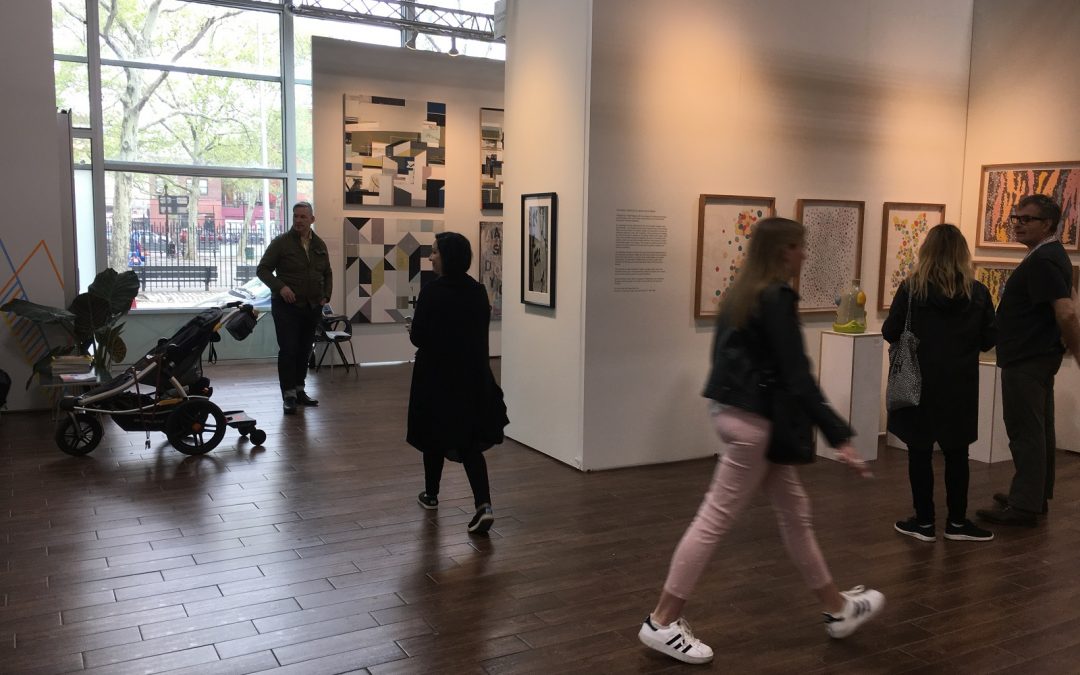 A Report from the Front Lines 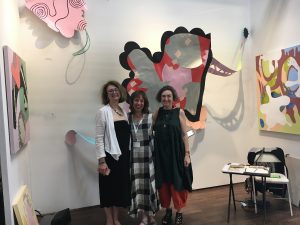 A few weeks ago, for the first time, I exhibited my work at The Other Art Fair, a marathon exhibition that runs biannually in spring and fall in the creative heart of New York City at Greenpoint’s Brooklyn Expo Center. Presented by Saatchi Art, TOAF showcased 130 “independent and emerging artists,” curated from 1,000 applicants. The fair has been running in London since 2011, but has only recently arrived on this side of the pond. (Currently, TOAF takes place in Los Angeles, Chicago—with the first one scheduled this fall—and New York.)

I’m a painter/installation artist based in Boston and have done my share of exhibiting in and around New England. I am many years beyond graduation from an MFA program, so not exactly emerging. However, I am not currently represented by a gallery and I want to get my work out to a wider audience.  Since I am not represented, I don’t have a shot at one of the fairs open only to galleries, like Art Basel Miami. What’s an artist to do?

I heard about The Other Art Fair by way of another Boston-based artist who did the fair in Brooklyn last November and spoke quite highly of his experience. He sold enough work to cover his costs, and he thought the enterprise was very well run. I was intrigued. Here was an art fair that welcomed unaffiliated artists. Plus, I am convinced that we’ll be seeing more curated fairs for individual artists because brick-and-mortar galleries are struggling. Further, I believe that you make your own success, so I decided to submit work through the free online application. (You don’t have to be on the Saatchi site to enter.) 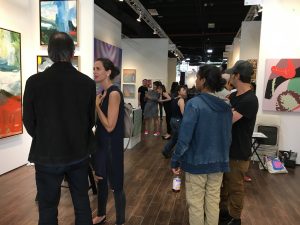 Visitors to the Brooklyn Expo Center

I made the cut, so I then needed to decide whether or not to accept. The fee for a 20-foot stand (a 12-foot back wall and two four-foot side walls) is about $2,000. There are several sizes, depending on your needs and resources. The 20-foot stand comes with two spotlights (more are available for an extra fee) and is the second to smallest. For the money, I think it’s worth it—you get the Saatchi brand and social-media machine working for you, a great venue, and a huge public platform.

Many of the other exhibitors were based in New York, but I also met artists from Sydney, Hong Kong, London, Italy, Vancouver, and Nigeria. I was amazed and impressed by the long distances people traveled, and now I wonder if they found it worth their while. Several of these artists seemed to have connections in New York who helped them run their spaces and sell.

If you are considering being part of TOAF, be aware that the fair runs for four days. This requires stamina and a willingness to interact with the public for hours at a time. Shy artists who hate talking to people about their work, think twice! Same goes for those who are less than energetic or have health issues. (I had two great friends who spelled me during the fair, and it was a life saver. But not everyone is so lucky.)

The Brooklyn Expo is located in the heart of Greenpoint, very close to Long Island City and PS 1. Art is everywhere, and so are hipsters. Several other art fairs were also were up and running that weekend, and I think the organizers felt that the proximity to other fairs would increase our audience. 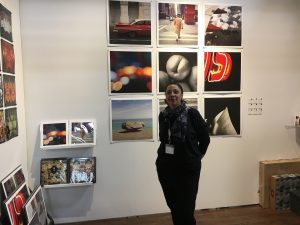 Photographer Camile O’Briant with her work

We left Boston at 6:30 on Thursday morning, husband and an artist friend in tow, and arrived in Brooklyn by 11:30. My set-up was complete by 2:30, which left me time to run to the hotel, shower, and change. I was back for the preview reception from 6 to 10 p.m. On Friday we opened at 3 p.m. and were there until 9. Saturday, our hours were 12 to 10, and Sunday, 12 to 6. I saw thousands of people, so in terms of exposure, I definitely feel satisfied.

The TOAF staff were fantastic—very responsive throughout the experience, helpful and resourceful. There was a food court, a tattoo raffle, a hip DJ playing music constantly, an indoor and outdoor play area for kids, some performance art, talks and tours, and interactive stands, including an area where fairgoers can try on virtual-reality headsets that attach to a cell phone app. These added elements created a lively, entertaining scene that kept visitors around to look and to buy.

You’re probably wondering if I sold any work. The answer is yes, but very little. However, I went to the fair with the expressed intention of making connections with curators, other artists, to solicit potential commissions, and also to broaden my exposure. Some who signed on came with the explicit goal of sales, and they were prepared for that by presenting reasonably priced, framed work. And there were definitely sales, with the TOAF staff taking charge of all sales and shipping for only a 15 percent commission.

I did not find many curators or gallerists at the show, so that was a personal disappointment. But I had interesting conversations with passers-by, many of whom took my cards and signed my mailing list. I hope that some of these connections will prove fruitful in the coming weeks and months. That was the wisdom that some of the TOAF frequent fliers shared with me—sales,  commissions, and showing opportunities may arise after the fact. 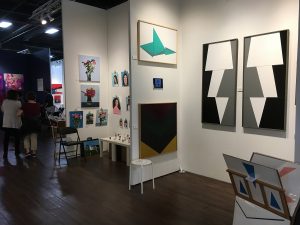 A couple of the 130 booths at the fair, with works by Issabella DiSclafani (left) and Jason Trotter

I would not do it again because I did not find the audience I was looking for, but many of my fellow TOAFers would absolutely, and in fact, have done several of these already.

As a p.s., I add some thoughts from my neighbor at the fair, New York photographer Camile O’Briant: “Overall, my experience at The Other Art Fair was a positive one. I went into it with modest expectations: I wanted to see what was possible, to expose my work and perhaps make some sales. In some way, I met these expectations, but if I’m honest with myself I would love to see more come out of the experience by way of more post-event opportunities and sales. So far, nothing—but since I’m writing this just a week later, it might be too early to know how it will all pan out.

“My advice for anyone looking to apply is to know that you will most likely take a financial loss. You will invest a lot more money, work, and time than you can mathematically gain back and that needs to be okay. It should be thought of as an investment in yourself and your work. If you can stay in that place before, during and after the experience then you’ll mostly like stay in the ‘glass-is-half-full’ mode of thinking. As mentioned above, I am grappling with my post-event expectations and reminding myself that I chose to do the fair to expose my work first and foremost. So, it seems that I met my initial goal. Will I apply again in the future? Time will tell.

“All of this aside, I met so many amazing people, including other participating artists, and had feedback on my work that I would have never received had I not taken the risk.”

Adria Arch has contributed to several reports for the site, including posts about the Golden Artists Programs and pop-up exhibitions.