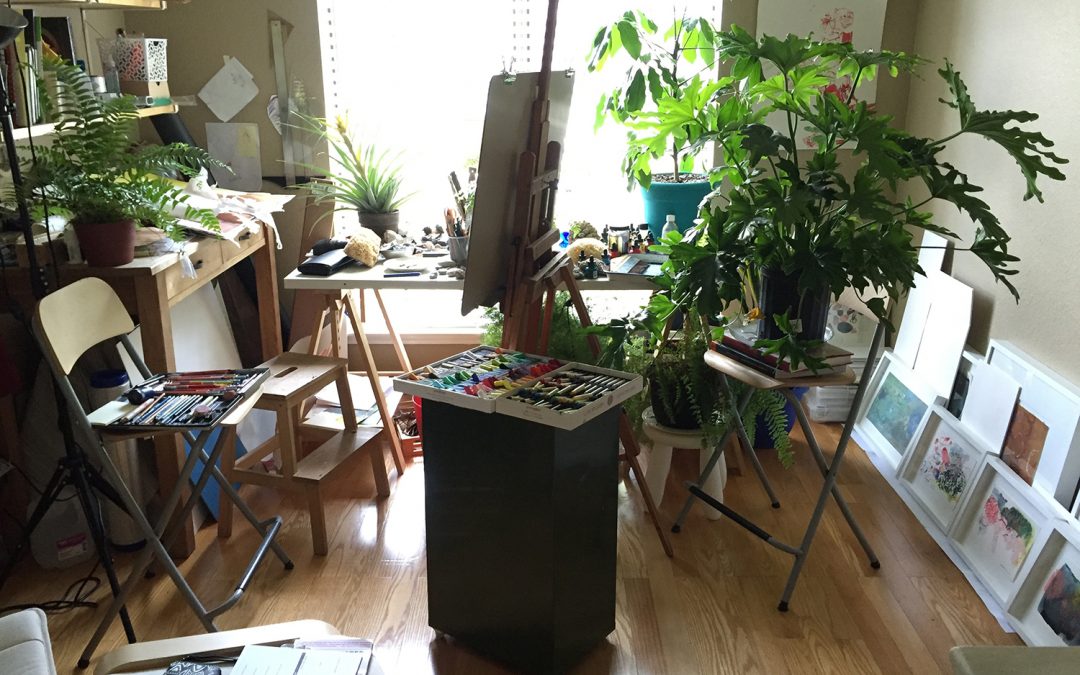 Make it a social event 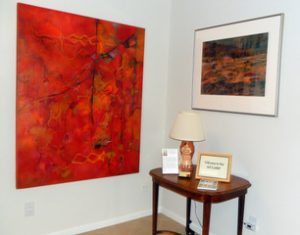 A corner of her house during Diane Sanborn’s “home show”

“I went through a depressing period when I thought I was all alone in my part of the world,” says Diane Di Bernardino Sanborn, who lives in Scottsdale, AZ, and makes largely abstract work. “There are no galleries in my area for contemporary art. There used to be one good gallery in Old Town, but over time it became all Western stuff.  Rather than sit around and grouse about it, I decided to do something.”

Her solution is an annual “home show,” where she opens up her premises for two days each year and sends out about 200 formal invitations, via snail mail, including a short description of what she’s been up to in the past year. For instance, in her latest series, “Calm,” Sanborn told potential visitors that she had dedicated the work to “a sense of peace and quiet”—her response to the tumultuous year in politics. And she carefully labeled the show “contemporary art”—“that rules out the Southwest thing,” she says.

Over time the “home salon” has proved to be not only an anticipated gathering among her followers, but a sales success as well. “I sold nine paintings, and I have two more sales pending,” she says of an event held in late April. 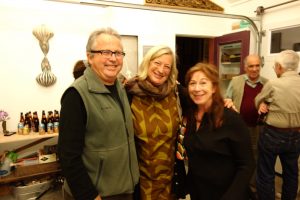 Leslie Fry (center, in black) turns the event into a party

The multi-artist tours, described in Part One of this report, are one way to bring the outside world into your sanctum sanctorum, but many artists balk at the idea of being one of a chain of stops as part of an organized trek through urban or rural enclaves of artists. Leslie Fry, for example, was the sole artist in a small town on an organized tour around Burlington, VT, that took place every Memorial Day. “It’s not really rural, but I happened to be the only one in my little city, and when people are driving around with an organized map and see a whole cluster of studios, it makes more sense to go there.” Now she makes the event a more informal affair “when everything is blooming and I can throw open my sculpture garden,” she says. “If no sales happen, I’m not going to get depressed.”

No matter how you choose to do an open studio chez vous—as a weekend house-and-studio tour, an annual invitational, or a more elaborate soirée for your professional network—a certain amount of advance planning is critical. Sanborn says she gives herself a full year ahead of time—nine months for pulling together a body of work, and three months to “curate” the art and send out invitations. “Do a good assessment of your space,” she advises. “A lot of people are looking to purchase art for home and office, and they want to get an idea of how it would look. Arrange things by size and color—think more like a decorator and less like a sterile white-box gallery.” 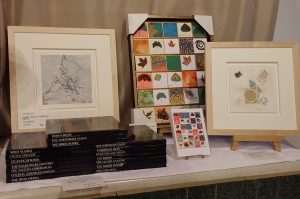 A tabletop display at Susan Christie’s 2017 open studio in Truth or Consequences, NM

Time of year factors into when you invite others into your space. The warm-weather season is obviously better for northern climes, but in Truth or Consequences, NM, which Susan Christie calls home, February is the best month. “That’s when it warms up in this part of the world, and people want to get out,” she says. “Also, many are down here for the winter.” But in the past—she has lived in Minnesota and Montana—Christie has planned holiday open studios (not a bad idea for a time of year when visitors may be thinking about gift giving)

Getting the word out depends on the size of your Rolodex and how much energy you can devote to that task. Social media is the obvious starting point, but some interviewed for this report prefer snail mail and a personal touch. “One year I painted 20 or 25 individual watercolors to send out as invitations,” says Christie.

“I mail out about 200 invitations,” Sanborn says.  In an age of Internet overload, “I believe people still like getting something in the mail. I also did business cards, name tags, and a program, which contains a couple of paragraphs on the works, then information on the individual paintings, dimensions, medium, and prices.” The whole package, she notes, can be easily and reasonably done through online services like Vistaprint.com. She invites family, friends, other artists and also the professionals in her sphere—“your doctor, lawyer, accountant, hairdresser. I keep building up a database and print out the addresses on labels.” 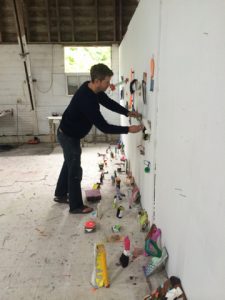 Sculptor Jim Condron takes a more casual approach to the open studios he does once or twice a year. “It’s mostly been a word-of-mouth thing,” he says. “I’ll email people directly with a personal note, the more direct the better. Or I’ll make a phone call. Since I’m in Baltimore County, where houses are far apart, I’ll put a sign out on the lawn and hand out flyers.”

How big a part you want to play, as salesman or showman, is largely a matter of temperament. Artists are often notoriously shy in talking about their work, but when Curt Brill, who lives in Tucson, TX, has visitors to his studio he enjoys “having a chance to see if I can verbalize what I’m doing, though I don’t like to give people too much information.”

Sanborn is more gregarious. “Every piece I sold had a story behind it. I talk about motivation and inspiration”—and those were the paintings that walked out the door.

For whatever reasons, though, Condron has discovered the event works better when he’s not around. “I was doing a residency, and my friends and supporters held an open studio in my absence. They sold $21,000 worth of art. It was better when I wasn’t there,” he says. “I don’t like having to negotiate, and inevitably buyers expect to do that. I’ve had the attitude that I shouldn’t be the salesman. Also, I get attached to the work”—so that can make it hard to part with.

How elaborate or casual you want things to be is also a matter of individual taste. When she was raising three kids in a suburb of Dallas, Melissa Mohammadi held what she calls “alternative open-studio events” for people who weren’t the sort to attend a more formal occasion. “I had opportunities to have large groups of people in my house, and there was a constant stream going through the studio. People would want to come back and watch the work grow.” For a  mother with young children, she says it was important to “still find ways to share your work.”

Most offer some sort of refreshments—whether it’s coffee and cookies or a more elaborate spread. “If you’re going to have drinks, hire a bartender,” Sanborn advises, and that’s what she does for Saturday-night open studios. “But keep the food super simple, cheese and grapes and crackers.” 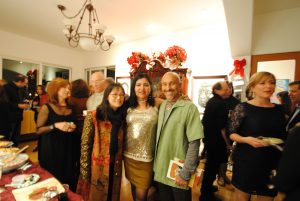 Linda Vallejo (center) hosts a soiree for her A list

Linda Vallejo, on the other hand, pulls out all the stops. Hers are not precisely open studios, but more like thank-you parties. “I do a high-end soirée where I invite my A-list. Anybody who has supported me in any kind of way in the last year—collectors, writers, curators, art historians. I do an hors d’oeuvres and wine party, maybe with a sangria punch, and I rehang the house so that I have current work on display.” She also hosts small dinner parties and invites people to bring a guest. From these intimate but highly social events, her network grows. Though sales or even just having art in evidence is not the end goal, “I always wind up with something—shows, sales, new collectors.”

“There are so many artists out there,” she believes, “you have to make the extra effort.”

Quick Tips (much the same as for Open Studios Part One):

*Consider offering works on “approval,” so that interested collectors can live with them for a while. “If it’s someone I don’t know, I might ask for a depost, $50 or whatever,” adds Sanborn

*If possible, have a spouse or assistant on hand to take care of sales and packing. “My most successful time was when I had someone helping me with wrapping, receipts, and other details,” says Condron.

*Get a credit card app for your phone. Find out about paying state taxes. And if your dealer sends people your way, work out an arrangement with her.

*Sales are great, but remember the event may serve other purposes. “It forces me to clean up the studio,” admits Curt Brill, adding, “I’m gregarious by nature but I spend a lot of time alone. My artwork becomes a way to step out and meet more people.” While she was living in Dallas, says Mohammadi, “one person who came through the studio bought a large piece of mine. He took it to a well-known framer and that led to funding for an art award. You never know where these relationships will go.”