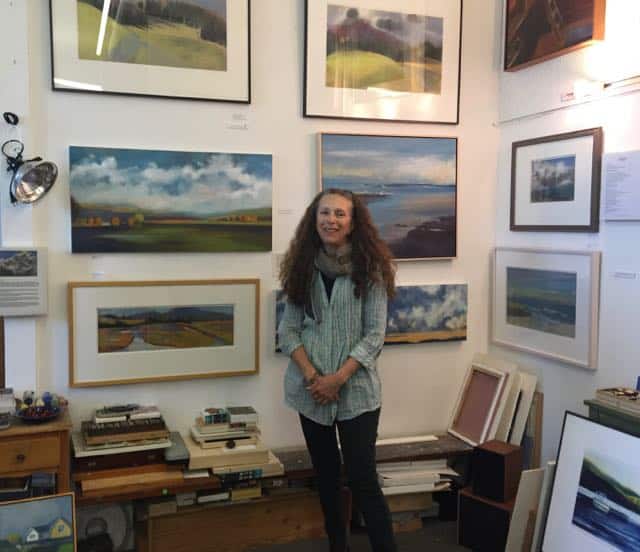 When I first broached the topic of open studios to several Vasari 21 members, some said, “No way. I don’t want a lot of lookee-loos traipsing through my private spaces.” Or “I’m at the point where I have enough gallery and collector interest that I really don’t have to do these anymore.”

But a generous handful (or at least enough to warrant a report) say that throwing open their premises occasionally, or participating in organized open-studio tours, offers many advantages: getting to know artists in the area, building a support system, attracting collectors and curators, and of course making sales. At a recent open-studio event in Marin County, CA, Wendy Goldberg waited around patiently during two days of lackluster traffic through her workspace before a visitor finally made a serious commitment. “One woman came toward the end,” she says, “and wound up buying the biggest piece in my studio.”

How well open studios work for you seems to depend on a number of factors—professionalism and organizational savvy, marketing, and location. But even a studio way out in the boonies can become part of an annual event that benefits both artists and the community in unexpected ways. 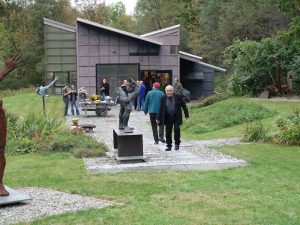 “I live in one of the poorest parts of New York State, Washington County,” says Leslie Parke, whose Bonnard-inspired apartment was the subject of an earlier story on the site. “People here are either rural or they work in Albany, and we’re three and half hours from New York City, so we’re not really a tourist destination.”

Nevertheless, it’s a scenic area where a large number of artists have chosen to set down roots. About a decade ago, Parke got together with sculptor Serena Kovalosky and Brenda McMahon, an artist who works in ceramics. “Serena had a background in tourism,” says Parke, “so she went after state money to help subsidize studio tours. And we both worked hard at selling Washington Country as the Tuscany of New York State.”

They have since brought in a consultant named Sue Sanderson, who has an expertise in development and “totally knew how to run an event,” says Parke. “We worked on trying to brand the tour as a quality destination. Sue and her wife go around and look at all the studios—are there places to park? Is the studio neat? Is everything priced?

“We had a lot of requirements,” continues Parke. “You had to have a tax number. You can’t undercut your dealers if they send clients your way. We wanted to develop an audience for us—not the prosaic Sunday plein-air painter—so artists have to go through a few hoops to be on the tour,” one of which is admission by jury.

Participants also subsidize the tours, paying $600 each to underwrite the costs of advertising, which include a website, brochures, mailings, and so on. But the outcome has been worth the investment. “In our first year, with 12 artists, we made about $40,000. Last year it was $70,000, realized among 15 artists.”

After it’s all over, Parke and her co-participants do a debriefing. “What works, what didn’t? Six months after the tour is over, we’re sending out an application for new artists. We plan way in advance to insure the quality of the event. We only do this every other year because we want to build up inventory and not burn ourselves out.”

In large (or even small) cities, the opportunities can vary, depending how involved you are with the community, what kind of studio building you work in, and where you are in your career. Suzan Shutan participated in Artspace New Haven, in Connecticut, for years, but found it often disappointing. If you’re not in or near the main space, a building called Erector Square, “it was harder to get visitors,” she says. “We’re right outside New York, so it’s also more difficult to attract serious collectors and curators. You can rent space in Erector Square, but there are no elevators in the building, except for freight. For the most part, nothing’s come out of it. If the work is abstract, if it’s humorous, that doesn’t always sell. The people who do well are often realists.” Another problem is that visitors are often looking to buy something at a bargain. “An older artist can’t afford to come down to $100 or $200.” 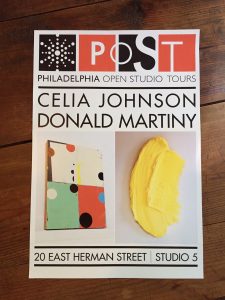 Nonetheless, she concludes, “open studios are great for artists trying to start a career. I’ve been excited to meet younger people. It’s a nice mutual exchange, and I love it for that reason. It’s a way for me to keep on top of the community.”

When Celia Johnson and Don Martiny participated in Philadelphia Open Studios (POST) IN 2011, they lived in a building occupied by many other artists. “We had a big open space, 1,000 square feet, with beautiful white walls, and we cleaned it up so that it looked very much like an art-gallery space,” says Johnson.

“The networking with other artists was worthwhile because you learn about galleries,” adds Martiny. “I sold three paintings, while Celia sold one or two. An architect came through, and there were collectors as well.”

Martiny and Johnson, who are married, have since decamped to a rural area in North Carolina. “I’ve reached the point where it’s too disruptive to have to the public coming through my studio. I’m happy to have real collectors, dealers, and curators,” says Martiny. “But in 2011 I was still trying to create awareness. If you’re in an urban situation, you can gain from the traffic and interest and visibility.” 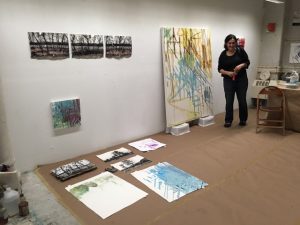 Kylie Heidenheimer, whose studio is at The Clemente, a cultural center in a former school building on the Lower East Side of Manhattan, says the role of open studios is in flux. “With real estate shaping where and how art is being shown, open studios may be increasingly important for both artists and their public,” she notes. “For artists between shows or without representation, they may also serve as structure and a deadline.

The Clemente and its resident organization, Artists Alliance, have continued to expand the annual open studios, Heidenheimer says,  With galleries and exhibition venues making the LES a big draw, the Clemente is taking out ads (one in Hyperallergic, for instance), adding events by performing arts organizations on the premises, inviting guest artists, and putting up quality signage for navigating the approximately 80,000 square feet of its 19th-century building.

Fran Shalom maintains a studio in Mana in Jersey City, New Jersey, which, says the website is “a vast former tobacco warehouse [that] unites artist studios, exhibition spaces, and ancillary services in a single location, facilitating conversation and collaboration among its burgeoning creative community. “

“The spaces are amazing, beautifully maintained, and the building’s not going to turn into condos anytime soon,” says Shalom. Twice a year Mana hosts open studios, usually in October and May, and these are coordinated with shows in the building’s gallery spaces. “We’ve had a show of John Chamberlain’s works, performances, and there’s a resident dance company. The open studios are from one to six, and you get thousands of people coming through.” Plus there’s a shuttle bus that runs from Manhattan to the Mana Complex in Jersey City. 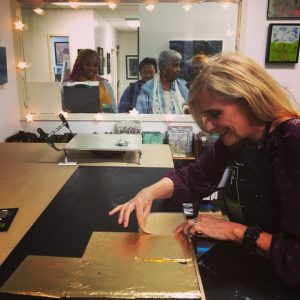 Angela White is also part of a big studio building in an art center called Artists and Makers in Bethesda, MD. “We do a First Friday every month, and there are 100 artists participating. Bethesda Magazine picks it up, and we get a really big crowd, often with curators and collectors coming through.

“I’ve learned a lot since I’ve been here,” she continues. “I was too shy to put up prices, so now I’ve made up a price list and I have that on the wall for some of the work, and I also make an artist’s statement available. I have flyers made up to promote workshops and demonstrations. If I have work in progress, I have my materials out for people to see.” She may vary her goal from month to month. “If my goal that month is to promote workshops, then I might have demonstrations in progress. If I’m working on paintings, I’ll have a flyer for people who want to sign up for private lessons.” Because of the First Fridays, she adds that she’s been invited to participate in group shows.

Coming soon: open studios in your home or workplace

Quick Tips for Wherever You Hold an Open Studio