More Residencies off the Beaten Path 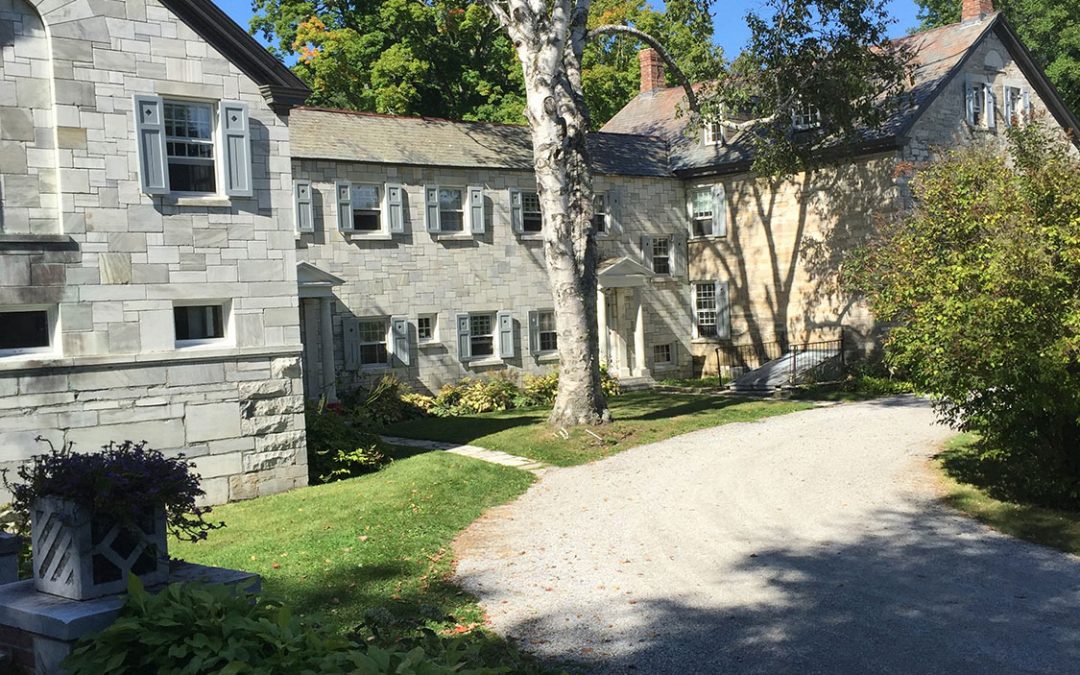 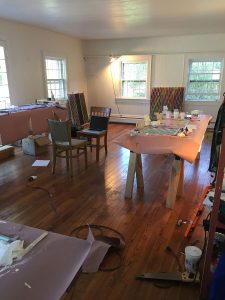 Headquartered in a historic mansion in the Green Mountains of Vermont, the Marble House Project accepts about 52 artists a year for individual 23-day residencies (there are also 17-day stays for artists with families, and this year the organization is launching a residency for collaborative groups of three or more). As part of its mission, Marble House supports a 100-acre sustainable farm and a chef residency concurrent with the artists’ tenure, and it may be the only one to offer residencies for curators. The programs run from late April through late October. Residents bunk in the marble-clad main house and work in studio spaces in four outbuildings.

“The gardens are all organic, and all the food is fresh and harvested on the site,” says Maureen McQuillan, who was an artist resident in September 2016. “There are nine residents at any given time—visual artists, writers, composers, performers. 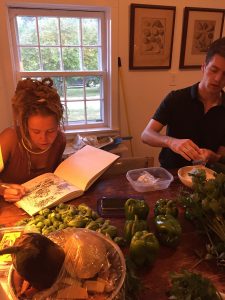 “Every night we ate together in a formal dining room,” she continues, “and once a week you cook for the group. The first one up in the morning goes out to the chicken coop and gathers fresh eggs. Everyone has a private room, though baths are shared. There are hiking trails on the property—you could go down one trail and discover an old quarry with huge slabs of marble stacked up like Stonehenge, just lying around. If you’re interested, the staff organizes trips to places like the Clark in Williamstown or the old Lincoln family house.

“There are no strict rules, though you are asked to engage with the local community one night a week,” she adds. “You can get an amazing amount of work done in three weeks when you don’t have interruptions, and this is a great place to make lifelong artist friends.”

Another plus: The only fee is the $30 requested with the application.

The Winter Workspace residency is operated through Wave Hill, a 28-acre public garden and cultural center in the Bronx, NY, overlooking the Hudson River and the Palisades. The program, now in its eighth year, is for day-trippers, New York-area artists who want to create new work and develop projects in Wave Hill’s stately Glyndor House during the winter season. Each of 12 artists, representing a variety of practices and mediums, is in residence for one of two six-week sessions between January and March. Wave Hill offers a $1,000 stipend for residents, as well as the opportunity to lead a workshop.

“I went because I’m interested in plant life and I love to draw,” says Elisabeth Condon. “You have unrestricted access to the gorgeous grounds that are part of Wave Hill and are given a year’s membership. I worked there seven days a week from eight to five, painting the same motif again and again: the plants on the sun porch. The Winter Workspace is like a state-park residency with a team of garden specialists acting as private park rangers, conveying encyclopedic information about plant and tree life on the grounds. The beautiful views inspired a new body of work in brush and ink on rice paper, and I taught a workshop on rice-paper idioms. My immersion in the gardens at Wave Hill prompted a new installation, to be shown as part of the Flora Fantastica! exhibition at Wave Hill this summer.

“You also get visits from great curators and critics,” she adds, “and Wave Hill has its own curatorial staff, as well as a head botanist and an expert team of gardeners.” 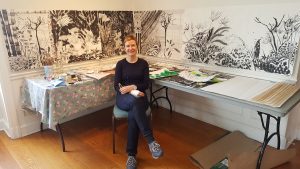 Elisabeth Condon in her studio at Wave Hill 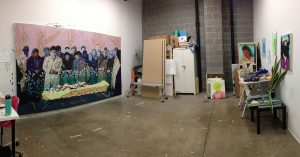 The Redline Artist Residency program is unusual in a couple of ways: the organization is one of the most actively engaged with the surrounding community, and residents work on site at Redline for two years.  “Artists are partnered with a school classroom, from kindergarten to high school seniors, and you work with the class on a social-justice-themed project—something that benefits the community,” explains Daisy Patton. “I had high-school students who worked on gender toys—these are girl toys, these are boy toys, these are overlapping. They come up with the ideas and you support them. At the end of the semester, they put on an exhibition.”

The art center and studio spaces are in the Five Points neighborhood of Denver, CO, an area that has “experienced considerable population displacement over the past decade,” says the website. “You have free studio space for the two years and it’s open to the general public, whether you’re there or not,” says Patton. “The idea is to interact with people, often people who have no idea about contemporary art. I was able to paint while talking to people—it’s not something everyone excels at.  I saw it as an opportunity for my work to reach a larger audience.  And through that experience I had people offer me shows and artist talks. I met my current gallerist, Doug Kacena, at RedLine.” 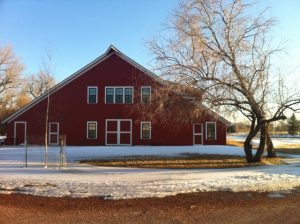 The gallery building at UCross

RedLine offers exhibitions as well as open studios. While Patton was in residence, Judy Chicago had a retrospective in the galleries. “Each year artists are part of a group show with previous residents,” says Patton. “After you leave, you are part of one more show as an ‘outgoing’ resident. It’s a way of linking past residents with current and establishing more of a network.”

Some artists share studio spaces, but Patton had a 300-square-foot space to herself. “It was a solo space that allowed me to experiment with large-scale work for the first time, and that made a big difference in how I was able to evolve as an artist.”

The program also invites guest speakers and visiting artists who do studio visits. “Gallerists would come and talk about how to work with dealers,” Patton adds. “An accountant might give a talk about taxes for artists. There were presentations about professional development that you’d never find in an MFA program.

“And as someone who has gone through the MFA curriculum,” she says, “this was like getting the degree again but without the psychological trauma.” 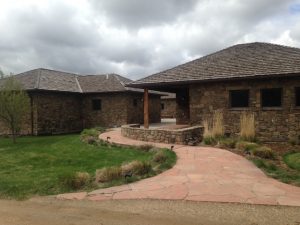 Located on a sprawling cattle ranch in eastern Wyoming, the UCross Foundation provides living accommodations and individual work spaces for approximately 85 artists, writers, and composers each year, with about 10 individuals on hand at any one time. Residencies vary from two to six weeks, and accommodations are in the renovated historic school house and train depot, each of which offers four bedrooms and shared baths.

The visual arts studios are in three separate buildings overlooking Piney Creek. “The space itself is about 1,000 square feet—it felt twice the size of my home studio,” says Sarah McKenzie, who has twice been a resident at Ucross, in 2012 and 2016. “You’re not aware of other artists working nearby, but at dinner you interact with everyone, and the food is amazing. The chef used to work for a wealthy family, and she prepares the evening meal, often six or seven dishes around a particular theme. Lunch is brought to your studio every day, and on weekends there are enough leftovers so that it’s easy to fend for yourself.

“I’m a mom, and when I’m at home—even though I am a full-time artist—my studio practice competes with so many other commitments,” McKenzie adds. “For me this is an opportunity to work till midnight if I want to. During those times when I was at Ucross, I’ve been under a deadline for upcoming exhibitions, and this was a chance for me to be more productive than in my day-to-day life. 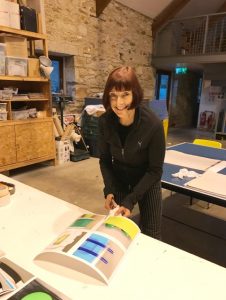 Kate Petley in her studio at Cow House

“There are no expectations for a culminating event, like an exhibition. No external pressures from the residency program about how you use your time. They give you the space and leave you alone.”

How to Flatten a Mountain is the intriguing name of a two-week residency sponsored by the PhotoIreland Foundation and Cow House Studios that’s “open to emerging and mid-career visual artists whose artistic practice in whole or part, makes use of digital and/or analogue photographic processes,” according to the website. At the end of the residency, artists present their works at an exhibition in Rathfarnham Castle in Dublin as part of the PhotoIreland annual festival. The first five days of the program are devoted to workshops led by “guest facilitators” designed to “stimulate the creative process, facilitate collaboration, familiarise participants with the people and places of the locality and tease out shared curiosities and thematics. The following five days provide the necessary time and space to create new work.”

“Most of the other artists were strictly photographers,” says Kate Petley, who is primarily a painter but has worked with photography on and off since 1992. “But two or three others had more of a cross-disciplinary approach, and after the residency I now feel more committed to the photographic side of my practice.”

The site of the residency is known as Cow House Studios, set on 180 acres of farmland in County Wexford, Ireland, south of Dublin. “They took an old stone barn, which was enormous, and converted it into studios,” says Petley. Adds the website: “artists are provided with comfortable shared accommodations where participants regularly enjoy great meals and conversation. Over the years we have changed and expanded our offerings to include residences designed for artists at all levels, educators and curators.” 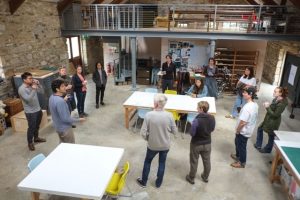 A workshop at Cow House

“The bedrooms are shared,” adds Petley, “but each has a private bath, and the food is fantastic. The chef trained at the Ireland Culinary Institute, and we were offered three meals a day.”

Admission is by application, and is highly competitive. Residents pay their own airfare and a per diem during their stay. “For what we got, it seemed incredibly reasonable—less than $100 a day. It’s a bargain considering that you’re in a drop-dead gorgeous part of Ireland and interacting with other artists and professionals. And the foundation pays all the expenses for the exhibition, such as printing and framing. We ended up with a very serious and interesting show that gave a good idea of the diversity of the group.

“I would highly recommend this program to photographers seriously focused on process, whether they incorporate other materials or not,” Petley concludes.

TopL The main building at the Marble House Project in Dorset, VT