“I never wanted to be a flower painter. I wanted to be a tough, cool painter,” says Elisabeth Condon in her fifth-floor studio on Manhattan’s Lower East Side, where she is surrounded by several large canvases that incorporate, yes, flowers—lush blooms in hot tropical or neon colors, often paired with exotic birds and set against veils of watercolor-like washes. During a recent six-month residency in Shanghai, Condon’s work was moving toward almost pure abstraction, just a few elements per canvas, and then after her return a startling metamorphosis took place.

Not that Condon has ever shied away from a certain exuberance. Her works of the last decade or so have alternated easily between landscape and explosive imagery based on calculated pours on canvas, and in 2012 she threw in a generous amount of glitter for her “Nightclubs” series, putting on the glitz again when she worked in Shanghai. “Earlier I used glitter to reference adolescence,” she says. “In Shanghai it reflected the buildings across the river, which were brilliantly illuminated at night. The city comes close to Las Vegas in terms of after-hours spectacle.”

Then soon after she came back to the States she was diagnosed with a serious illness. “I couldn’t work for long hours, and I stopped using the glitter,” she says. Friends sent masses of flowers, and the artist filled a notebook with ink and wash drawings made using a Chinese brush pen. “After spending so much time looking at individual blossoms, the images started to coalesce, a whole bouquet would come together, and I could feel my energy starting to return.” Meanwhile, she also came across swatches of fabric her mother had collected over the years and sent when Condon was at work on the “Nightclubs” series. “When I was ill, I was in Florida, and then when I came back to New York I wanted to work with the flowers but didn’t want to work from actual flowers, and so I went back to the swatches.”

Her mom had collected a sizeable assortment over the years, especially during the 1960s and ’70s when Condon was growing up. “She was a fiend for decorating the house, and I was surrounded by all this wallpaper—like, a lot of wallpaper,” she recalls. “Her idea of a birthday present was to redecorate my room while I was away at school, and so I would come home to all this flowered wallpaper. For so long as an artist I wanted to get away from that aesthetic, but in China I began to realize the emphasis on harmony and balance were also at work in commercial products like these.

“During the time I was sick, I became very close to my mom,” Condon adds. The swatches also took her back to childhood, and to a time when she would draw and paint on the wallpaper in her room, carving out a closet-studio to make collages and other works. The kind of design elements and lushly decorative aspects of the fabrics and patterns that had surrounded her as a child began to make sense after years of studying Chinese landscape. “I didn’t feel the design elements of these things made for very meaty subject matter, but after being in China I realized that the way things were painted started to mean more than what was painted. In Chinese art the emphasis is on opposites and on balance.”

Hence in Condon’s latest series, called aptly enough the “Wallpaper Paintings,” there is an intriguing marriage of tried-and-true Color Field and AbEx tactics—pours, stains, splatters, and drips—and highly stylized blooms and birds that will be familiar to most of my generation from the mass-produced designs of Vera, Marimekko, and assorted anonymous fabric artists who often drew inspiration from older embroidery and crewel-work. “It’s a collision of languages happening,” says Condon. “I see it as a huge opportunity to build on that ancient Asian desire for calm and harmony.” 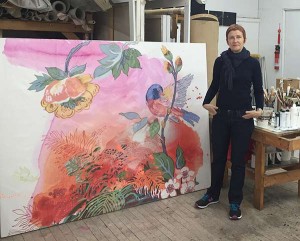 Elisabeth Condon in her New York studio. She is the recipient of numerous awards, including the 2015 New York Pulse Prize for the body of work she created during a six-month residency at the Swatch Art Peace Hotel Shanghai in 2014. More about the artist can be found at elisabethcondon.com.