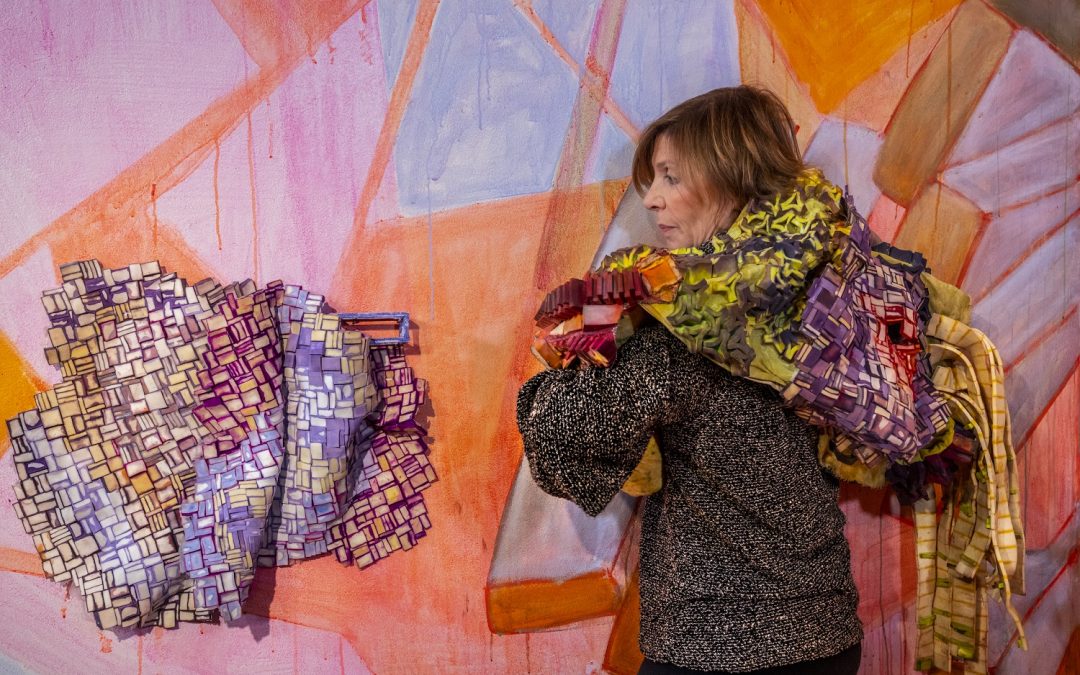 When Margery Amdur was invited this fall to build an installation in a gallery at Augsburg University in Minneapolis, MN, the Philadelphia-based artist envisioned an immersive environment that would draw on the many interests she’s pursued over the years. Probably best known for small and large “relief” sculptures that use cosmetic sponges as their building blocks, Augsburg presented her with an opportunity to draw on her other accomplishments, ably demonstrated over a 36-year career in shows in both the U.S. and other countries. Among her recent commissions was one for the floor of the Spring Garden metro station in Philadelphia, which took van Gogh’s sunflowers and paint-by-numbers kits as the underpinnings. 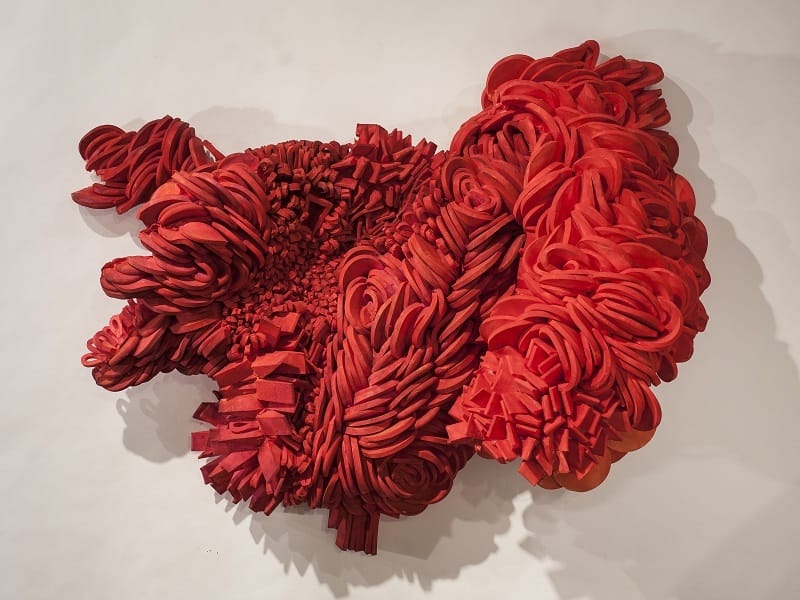 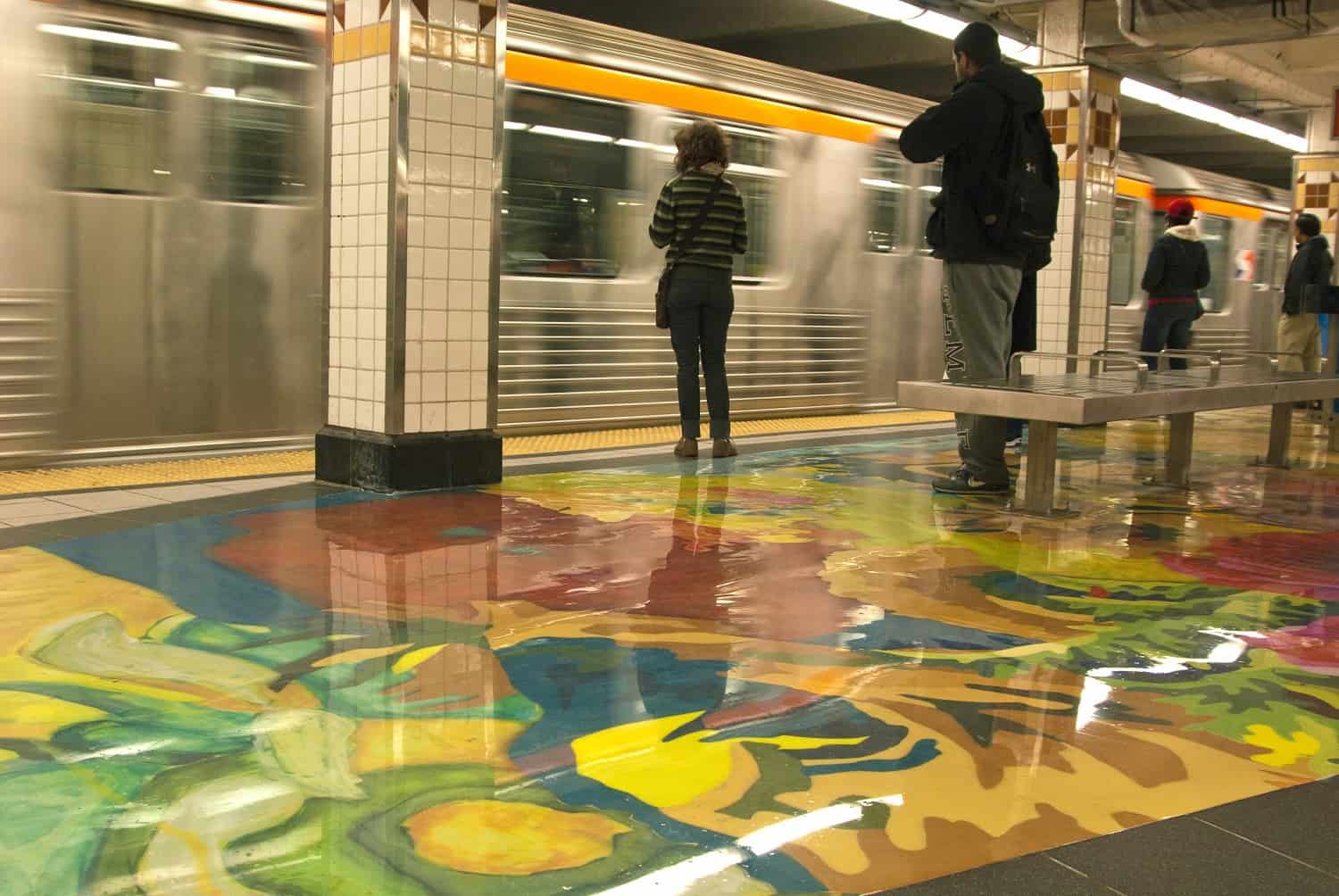 The challenge for the artist was to fill the gallery’s space with the only mandate the catch-all theme of “creative process for visual artists.” Called “Under Cover,” the project gave her, she says, “pretty much free rein to do what I wanted, and I wanted to be in a position of experimentation. I didn’t want to simply send things to put on the walls. As an artist, I traverse multiple disciplines, and my art does not fit easily into categories.”

During a six-month sabbatical preceding the Augsburg installation, Amdur was a visiting professor at the University of Hawaii and the Academy of Art in Riga, Latvia, and spent a month at the Vermont Studio Center, where she had the chance to devote 12 hours a day to components for “Under Cover,” like dimensional shapes made out of porcelain clay, which would echo lines drawn on the walls of the gallery. 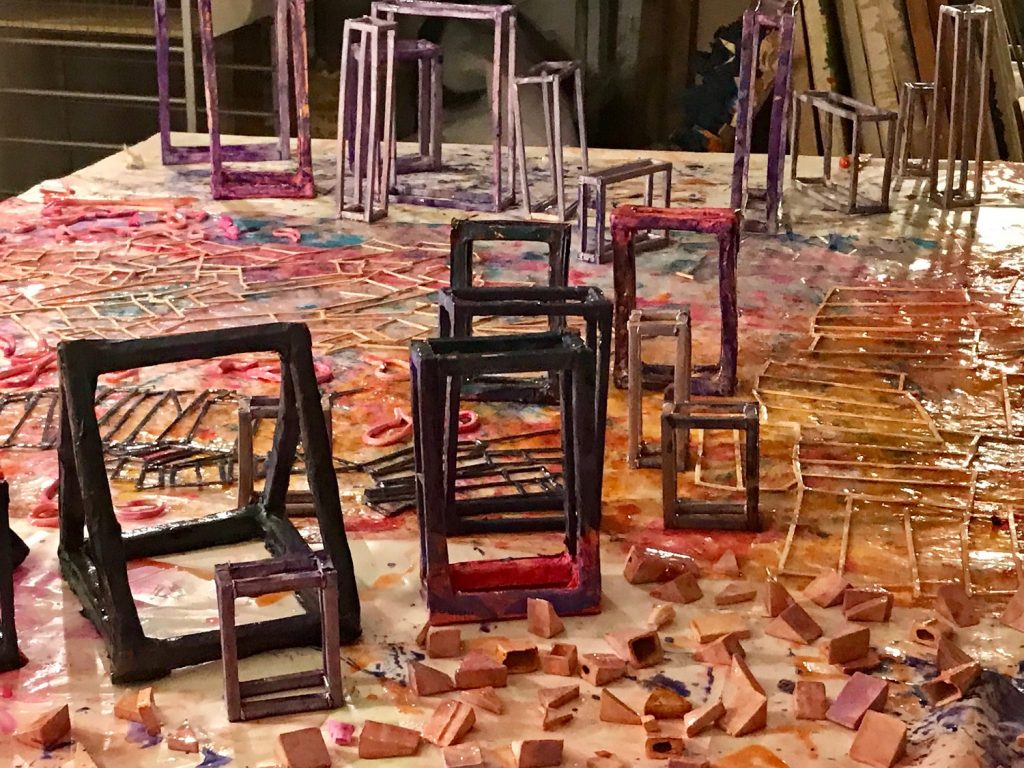 Other elements realized off site included enlarged three-dimensional building blocks made out of cardboard, covered with flocking and pastel pigment. 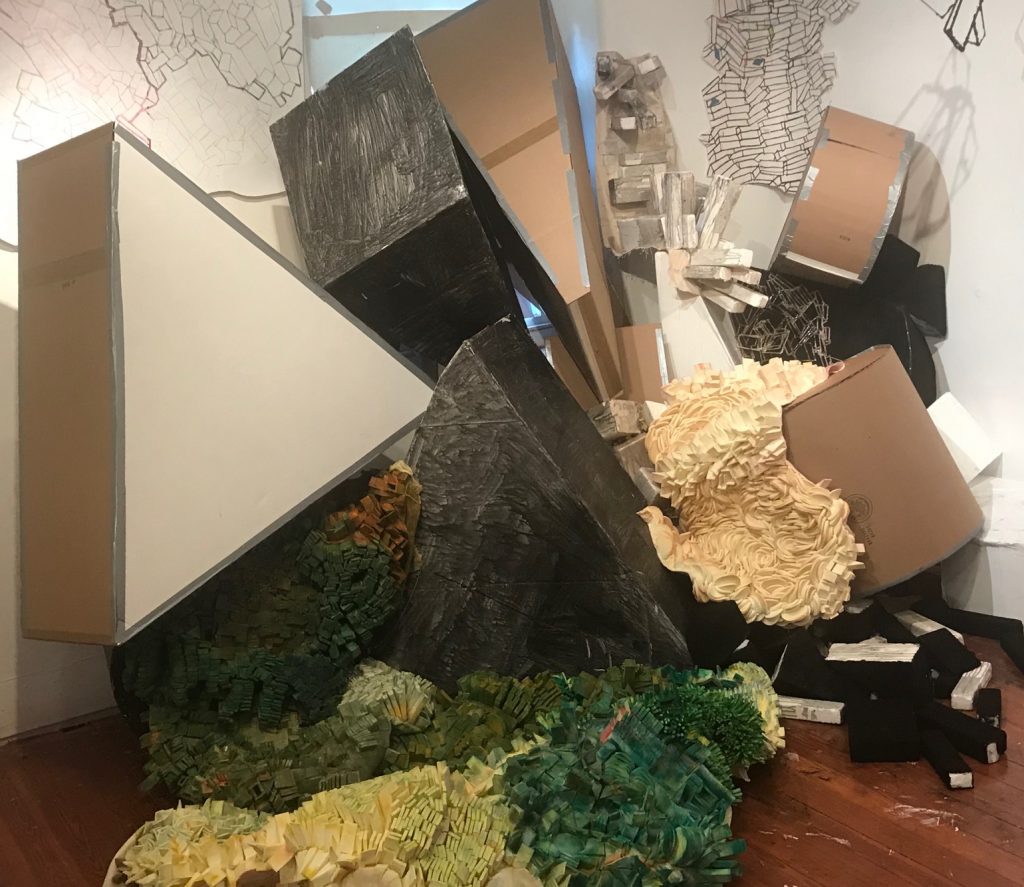 Once she arrived in Minneapolis, Amdur and her assistant from Philadelphia spent about five days pulling the installation and all its various and many-layered parts together. “I wanted to put myself into the making of the piece,” she says, “to see the whole thing growing from a place I had not known before.” 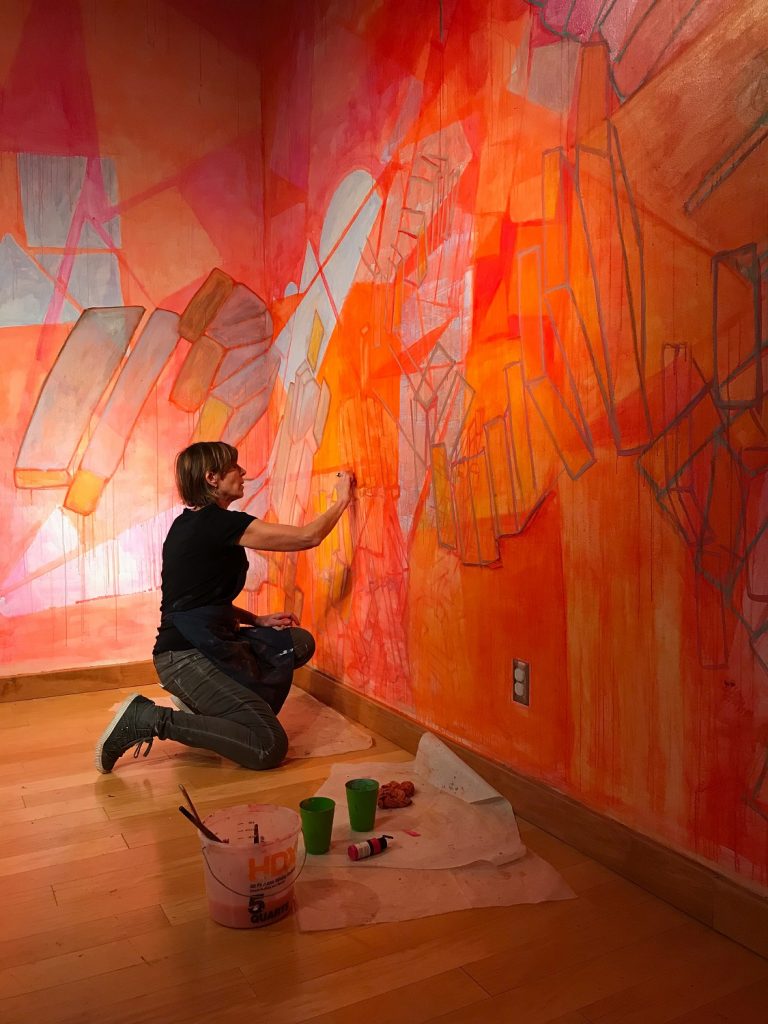 Armdur tackles a corner of the gallery

In the end, “Under Cover” filled about 1,000 square feet of the Gage Gallery at Augsburg from September 6 through October 17 of this year. “I sent all the various components from Philadelphia, including large sections of canvas with sponges that were already attached and colored, so that when I was on site I could staple them to the walls or arrange them to become part of different formations. Putting them together was largely intuitive.” 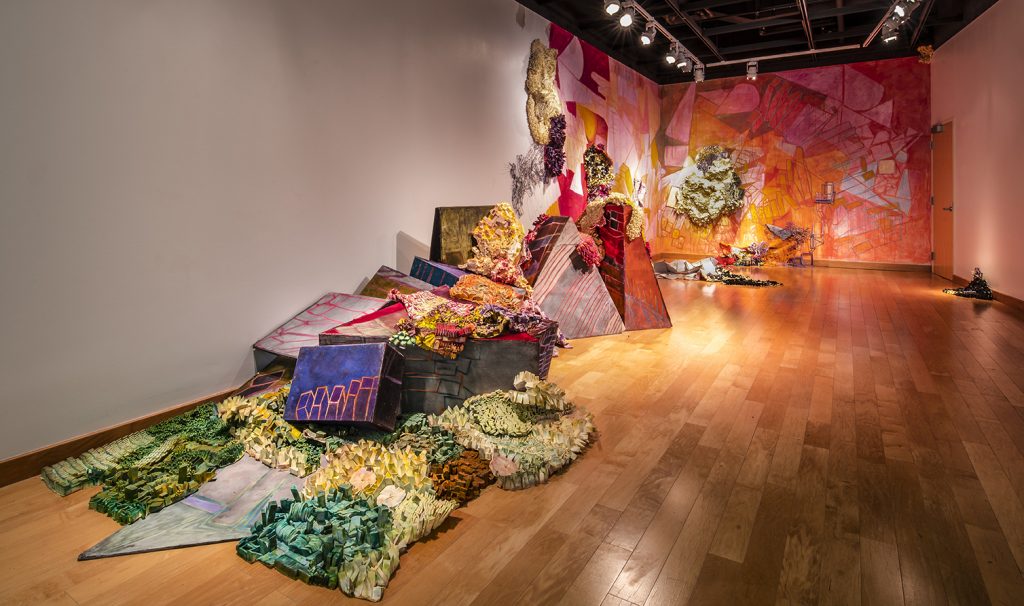 A long view of “Under Cover”

“Walking farther into the entry,” she says, “visitors encountered three-dimensional triangles made out of cardboard, then flocked. And then I drew on the shapes using pastel pigments.” 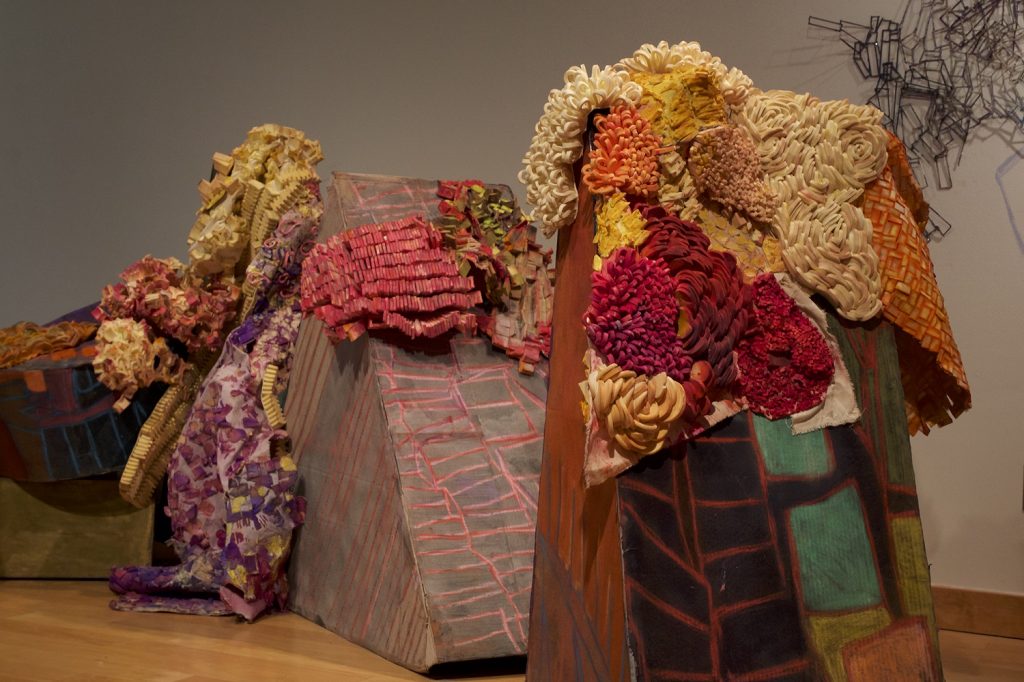 Draped over the large triangles were “cloaks” made from recycled sponge components that visitors could wear as they walked within the space, thus lending a performative element to the installation. “My desire was to create ornate protective coverings,” Amdur explains.

“By ‘wearing’ part of the imagery, students and other viewers extended the meaning of the work,’ she continues. “The introduction of the cloaks in ‘Under Cover’ presented an opportunity for more direct participation, as well as an opportunity to touch the art.” 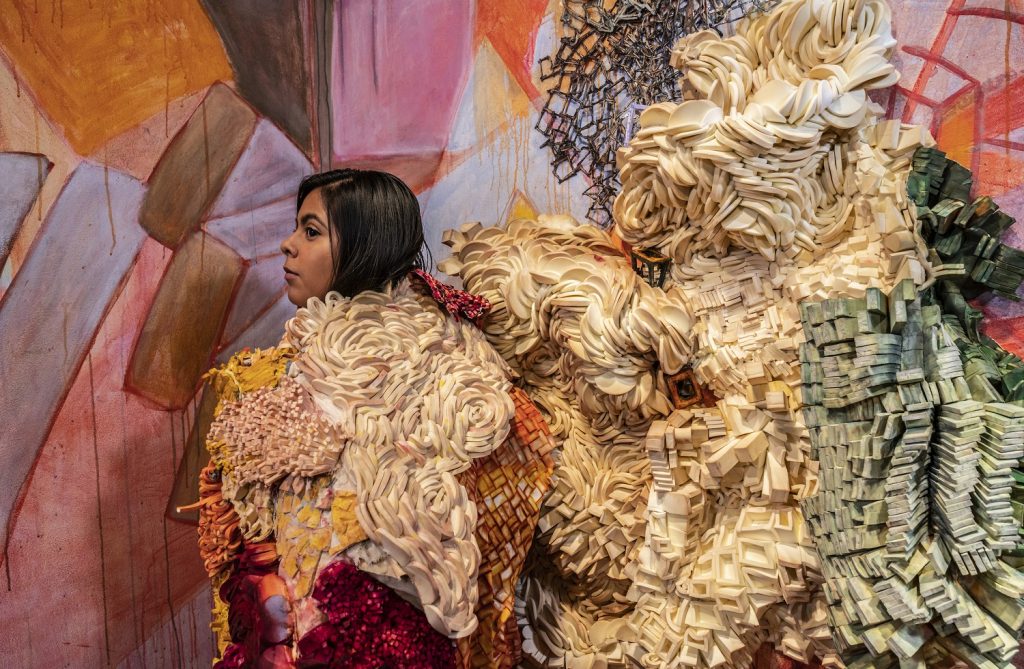 The far corner of “Under Cover” shows patterns taken from the large free-standing shapes and realized in gouache and ink. “To accomplish this, I took the original sponge constructions before they were colored and had them scanned on a large flatbed scanner,” she explains. “After that I uploaded the scans into Photoshop and used a Wacom tablet to trace the shapes with a pencil-like tool. These tracings created what appeared to be topographical maps, offering a sense of geometry floating in space, the shapes echoing the elements seen in three dimensions.” 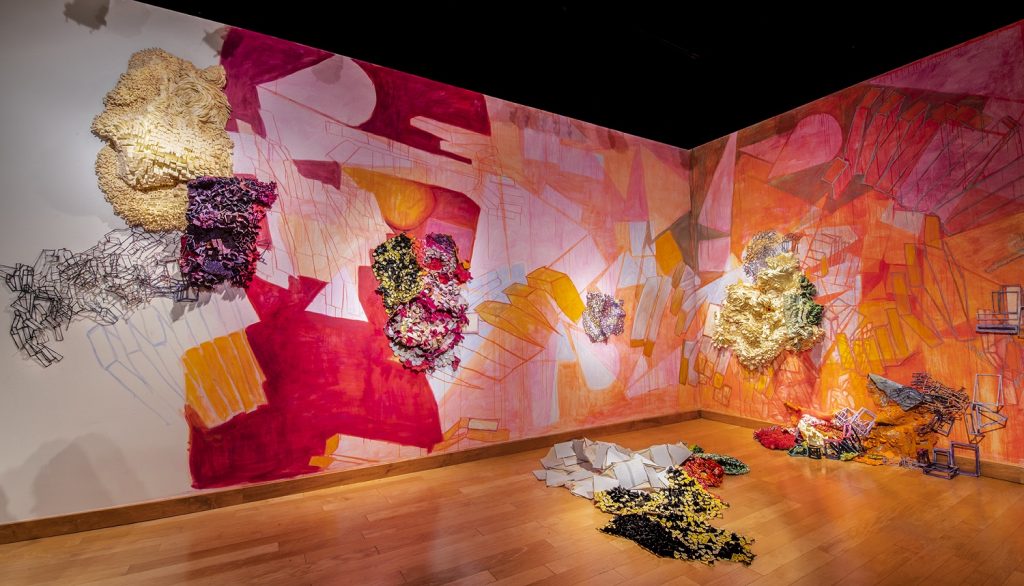 The jumble at the foot of the back wall contains rectangular “frames” like the ones realized in the studio months earlier. Above and throughout the installation are sculptures and reliefs made from cosmetic sponges covered with ink and pastel pigment, hand painted porcelain parts, miniature balsa wood linear arrangements, and cardboard covered with very fine glitter, suggesting the ashes in the Icelandic terrain. “My installations provide spaces for one to pose questions, but there are no clear answers,” says Amdur. 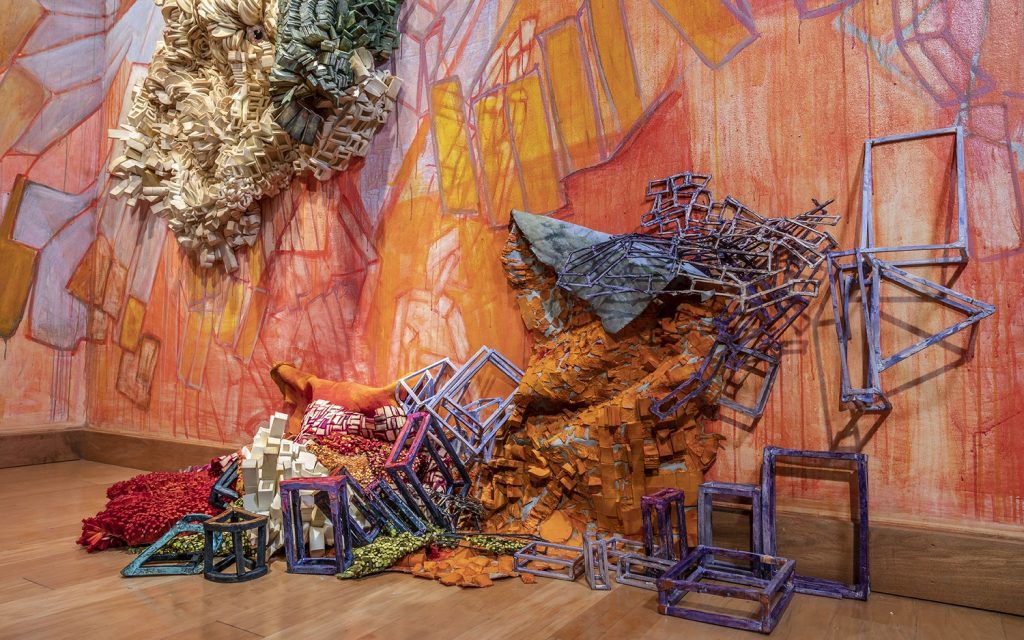 The experience of an Amdur installation was vividly captured by Noah Becker, a critic for Art Voices, who wrote four years ago that “her work is extraterrestrial and transcendent….We are aliens in Amdur’s internal mapping process, and we find ourselves thrown into the center of her world. Her topography is visceral, and her color is a firestorm of noise and activity.” Amdur herself puts it more simply, “My work is about attempting to slow down an overly complex and fast-paced world.”

All photos by Phil Ward.

Top: The artist wearing elements of “Under Cover”