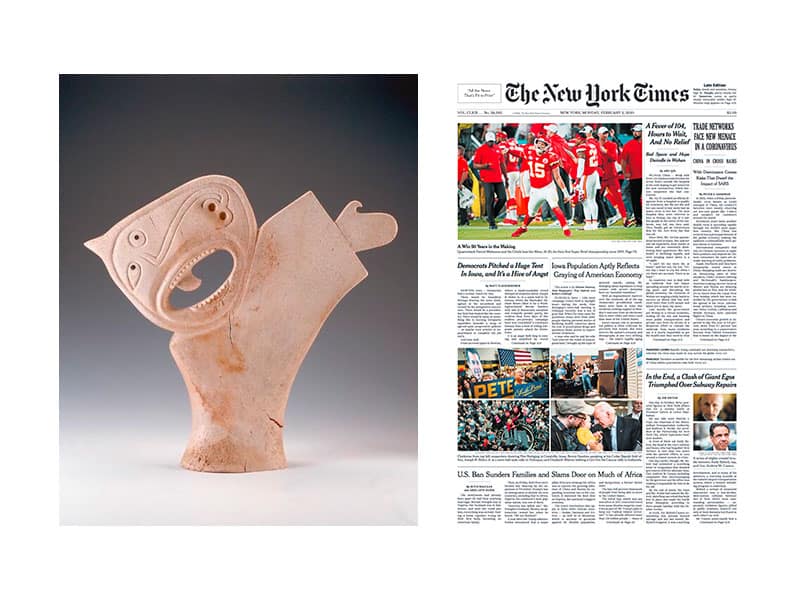 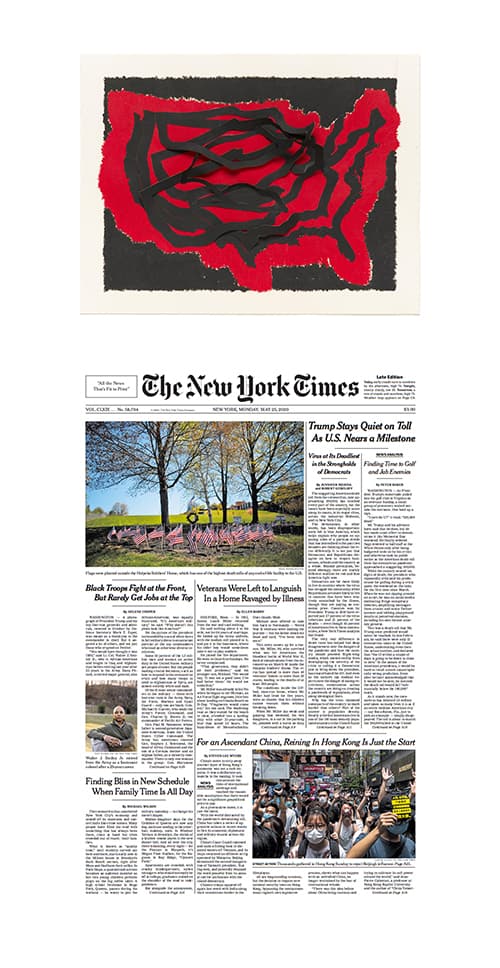 At the start of each week, subscribers to Lisa Blas’s RSS feed called “Monday’s Image” are treated to a visual puzzle, an intriguing exercise in compare and contrast, an introduction to a work by an artist you’ve probably never heard of before (paired with the front page of Monday’s newspaper), and a quickie entrée to the highly cerebral but accessible process behind these bulletins.

On Monday, May 25, for example, Blas paired Doug Hall’s collage The United States Cut Into a Continuous Strip, a crude outline of the country crisscrossed by undulating black bands, with a Monday edition that included headlines about black troops who rarely get top posts in the military, veterans ignored in a nursing home, Trump’s mishandling of the pandemic, and the continuing clash of forces in Hong Kong. Some of the parallels seem fairly obvious, but in talking to Blas you come to understand that her search for the right artist to pair with each Monday’s front page is a highly subjective and exhaustive undertaking.

The “Monday’s Image” we talked about at greatest length appeared on May 11, when she chose K.H. Hödicke’s Magic Window Cleaner II, from Capitalist Realism, a screenprint on Plexiglass from 1967 in the collection of the Art Institute of Chicago. The headlines that day included schools re-opening in Germany, bias against blacks in treating Covid-19, paramedics not using CPR on some patients, the bleak economic picture for the airlines and meat-processing industry, and a grid of photos of health-care workers “In Harm’s Way.”

There’s an immediate parallel between the Hödicke and the photo that accompanied the story about German schools: both feature bright orange rectangles, for one thing. “The screenprint is very powerful aesthetically,” Blas says, “and then you have the grid about the health-care workers, the article about bias toward African Americans who have been turned away from hospitals. Something about the Magic Window Cleaner spoke to me, in a sense, about the coverup of the pandemic.” In the photo at the top of the page, “you have those open doors in that high school, you have multiple windows, you have the long corridor and windows within the doors of the high school. Then there’s the grid of the hospital workers, which is also like a window. So my interpretation is that there are multiple truths being revealed and covered up at the same time. I found it fascinating that the Hödicke is in fact screenprinted on both sides of the Plexi….those are some of things that went through my mind.” 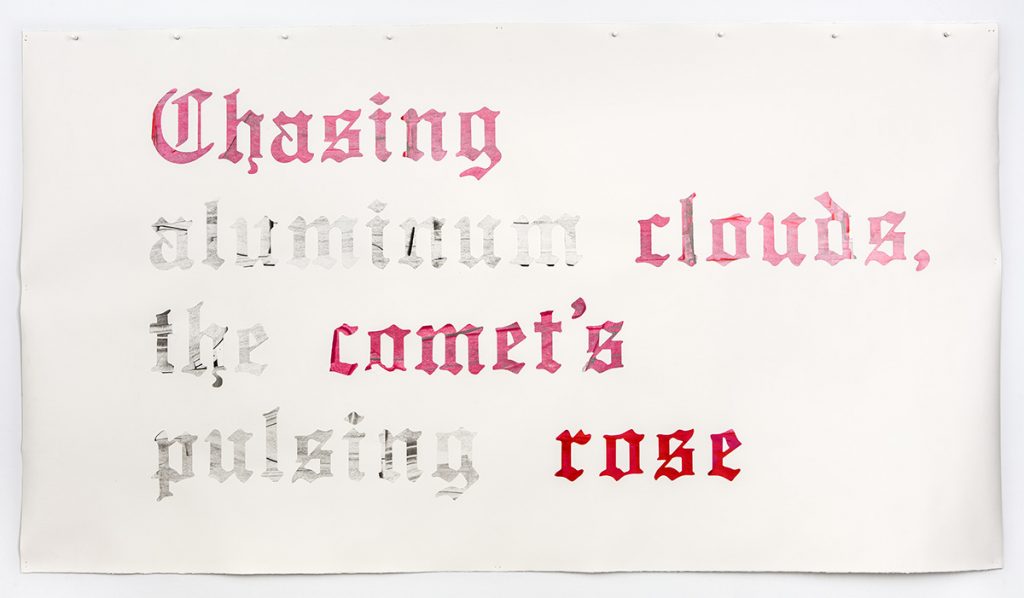 As she is reading every story on Monday’s front page and scrutinizing the photos that accompany them, Blas makes lists of hashtags. Those hashtags—which she calls “fragments of language”—help her find the image. She has her own archives,  but she also turns to the ‘net and plugs in search terms that lead her to museum websites, where she scrolls through specific collections to see what’s there. It’s an hours-long process in search of an elusive quarry. 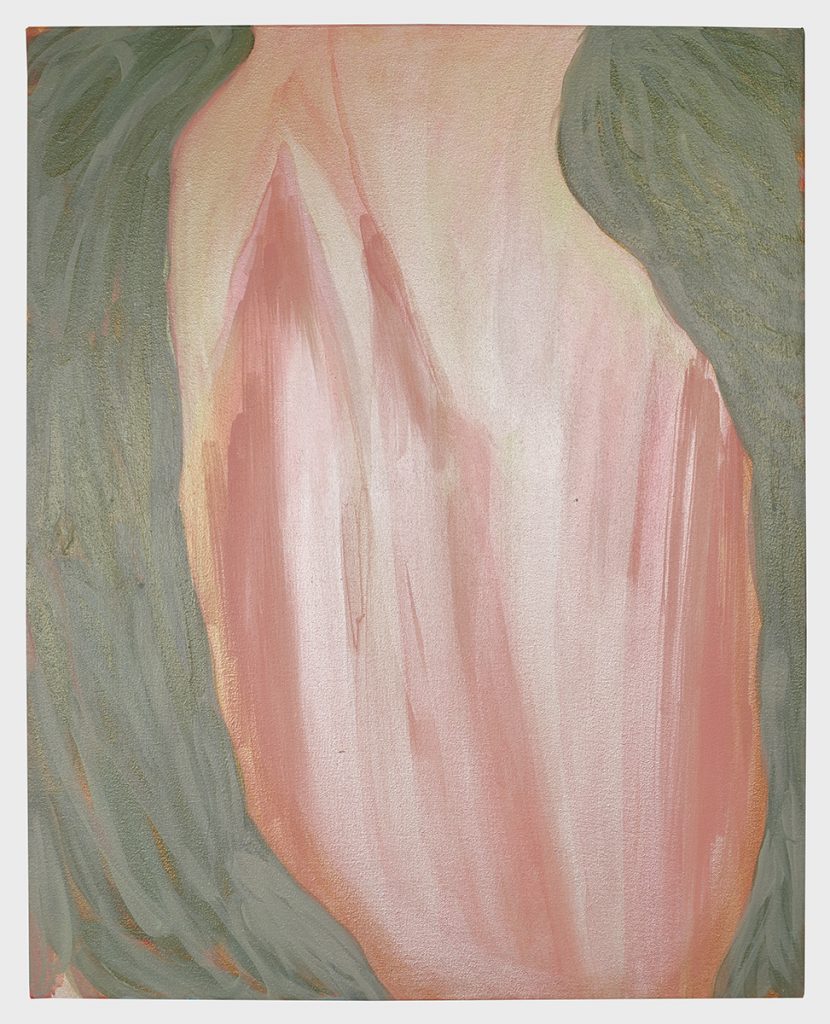 Generally the artist Blas chooses is unknown or under-known, and the image must be of high quality for reproduction on the web. “I have to get to that moment where there’s a synthesis and a surprise for me,” she says. “I want to be able to do Monday’s image and then put it out there for the viewer without doing a lot of explanation. I want the viewer to make these links between the semiotics of the paper and the work of art because I think we all bring our own archives of images and experiences to any visual thing.

“I try to find images and works I’m unfamiliar with because I feel there’s so much work that never sees the light of day,” she adds. “This is a way for art to have a life beyond the storage units of museum archives.” 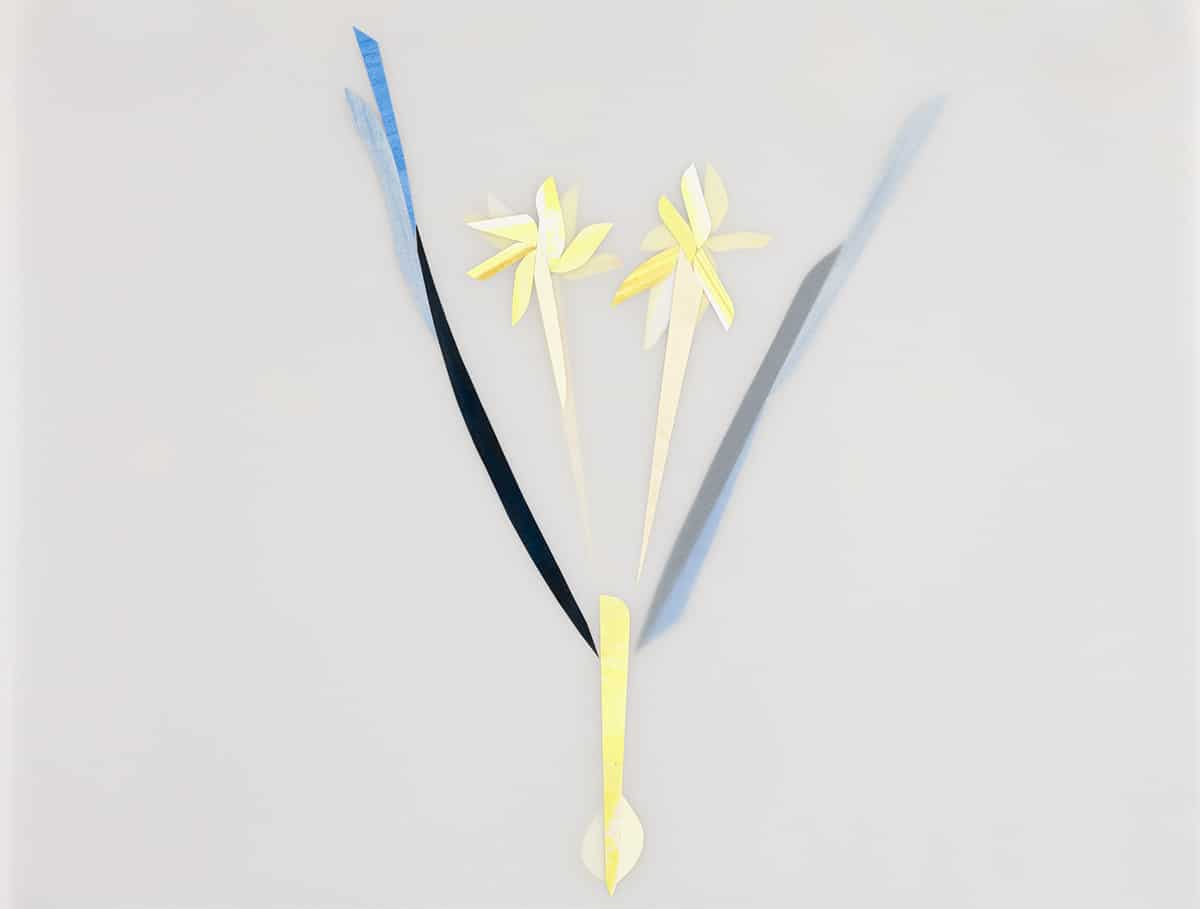 Infinity study, after Anna Atkins (2014), acrylic and interference paint on watercolor paper on two sheets of Opalux vellum, 19.5 by 25.5 inches

Blas says she’s had a fascination with newspapers since she was in graduate school at Claremont University in Claremont, CA. “Some of the first images I remember being completely blown away by were John Heartfield’s photomontages critiquing the rise of fascism in Germany. And growing up in Southern California as an artist, you inherit the legacy of Ed Ruscha, who has used newspaper mastheads for a long time.” 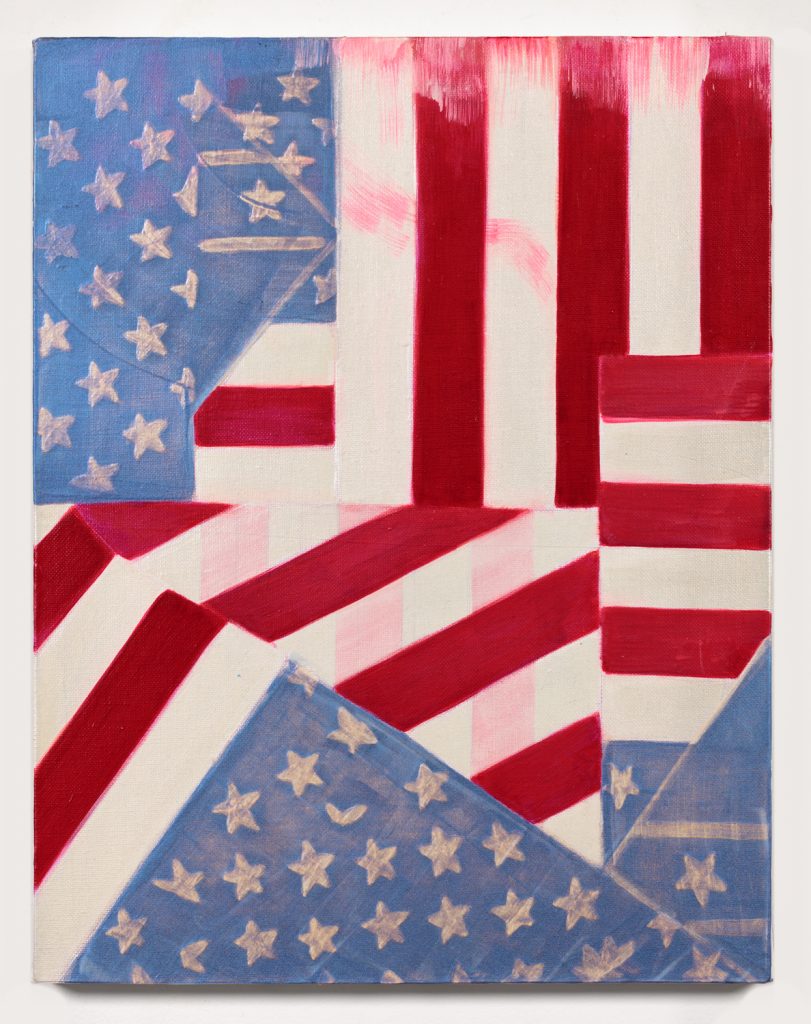 While she was living in Washington, DC, for five years between 2004 and 2009, working on the faculty of the Corcoran College of Art and Design, Blas regularly walked past the Newseum, a museum dedicated to newspapers and the news that closed at the end of last year. “They had a huge vitrine in front of the building and every day there would be several newspapers from around the world, the full broadsheet printed and displayed. I realize now how seeing those front pages really affected me.”

It turns out Monday’s front page is the most carefully considered among the editors of the paper. A few years after Blas started the series in June of 2015, a friend who works for T, the monthly style magazine of the Times, showed her the conference room where editors met to decide the Monday line-up. “I would have thought the great meeting of the minds was for the weekend edition,” she says, “but in fact it’s Monday. And that was the room where they met to look over the source material and photos coming in from various bureaus.” 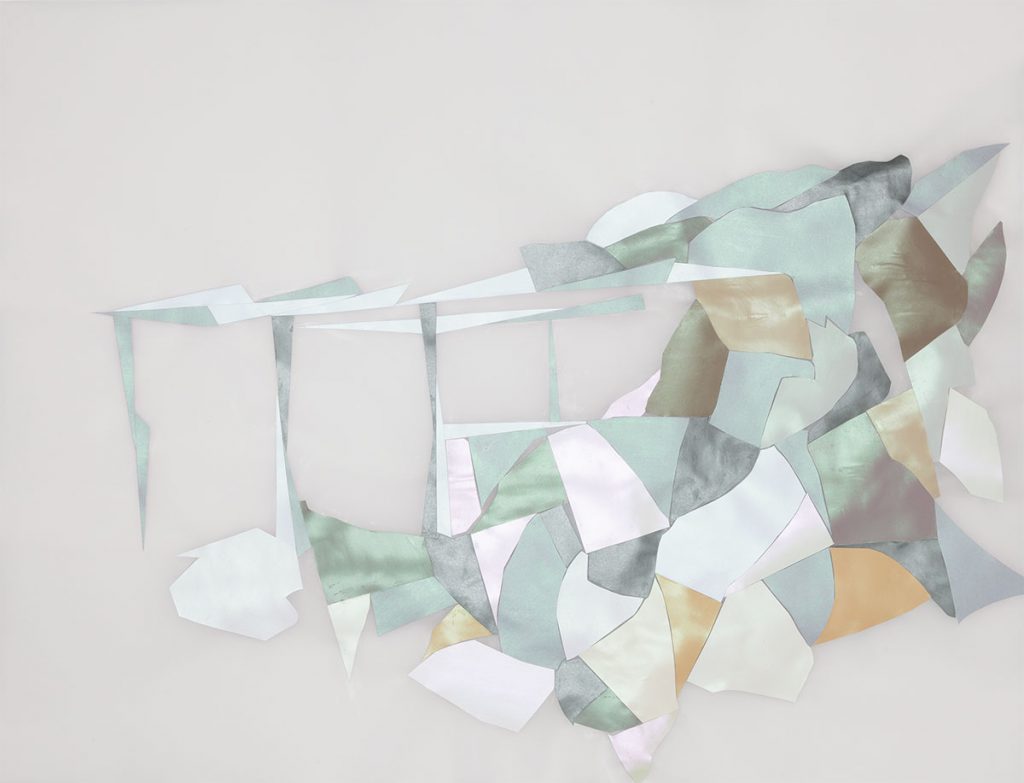 It’s also the day when Blas’s own work week begins, so her studio time for the next five days kicks off with a highly dedicated research project.

Blas has worked in collage, photography, painting, and other mediums. Many of her projects, as you can discover on her website, have timely conceptual underpinnings. “I made a series of medium-sized collages on vellum pointing to cyanotypes of British Algae by Anna Atkins, in addition to large-scale collages on Arches paper of news headlines referencing environmental catastrophes,” she writes in her artist’s statement. “This approach folds past and present, where the viewer might experience moments of déjà vu: Why do these botanical specimens look familiar? Didn’t this flooding occur elsewhere? Have I read a similar headline recently?”

But it is “Monday’s Image” that has the potential to reach the greatest number of viewers and involve others in the artist’s work in a way that gallery shows cannot. “I follow it religiously,” says critic and art journalist Carol Kino. “The resonances between the work she chooses and the front page are so uncanny and so on point. To do that kind of series regularly takes such incredible discipline, and you have to have such a wealth of images at your fingertips. I hope that thoughtful work like this will start to shine more brightly, as we’re finding new ways to understand and appreciate art during the pandemic.”