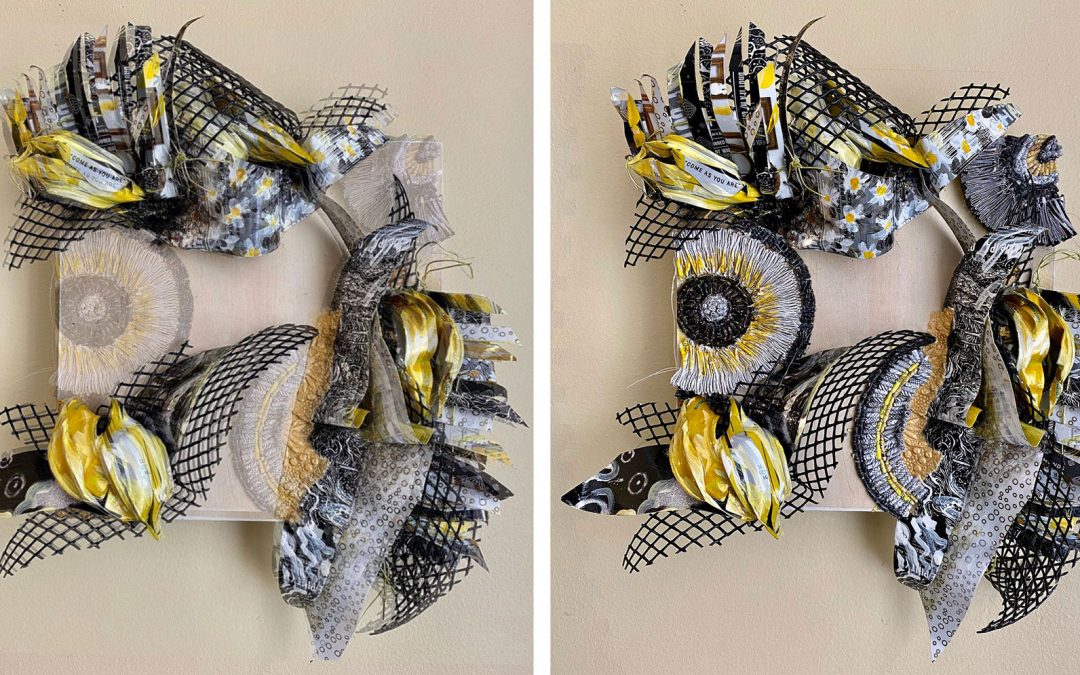 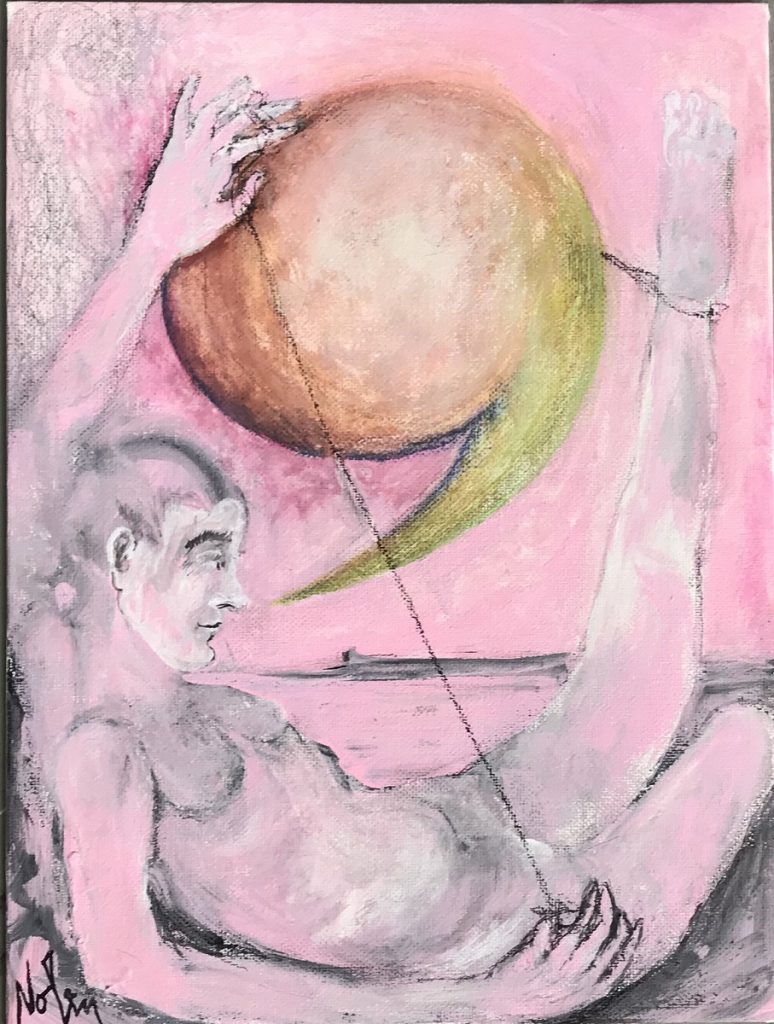 This past January, Donald Trump began muttering about privatizing the U.S. Postal Service. By April, as the necessity for mail-in voting took hold around the country, his musings became outright threats. Social media was flooded with people exhorting one another to buy stamps to show support for the USPS.

Artist Christina Massey came up with another idea. Instead of simply purchasing stamps—a noble gesture, but not one apt to draw attention to the issue—why not mobilize artists to use the postal system as part of a massive art project? Tweaking the old artists’ game known as the Exquisite Corpse, she envisioned artists from all over the United States mailing their artwork back and forth to one another, each working on, and co-creating with the other. 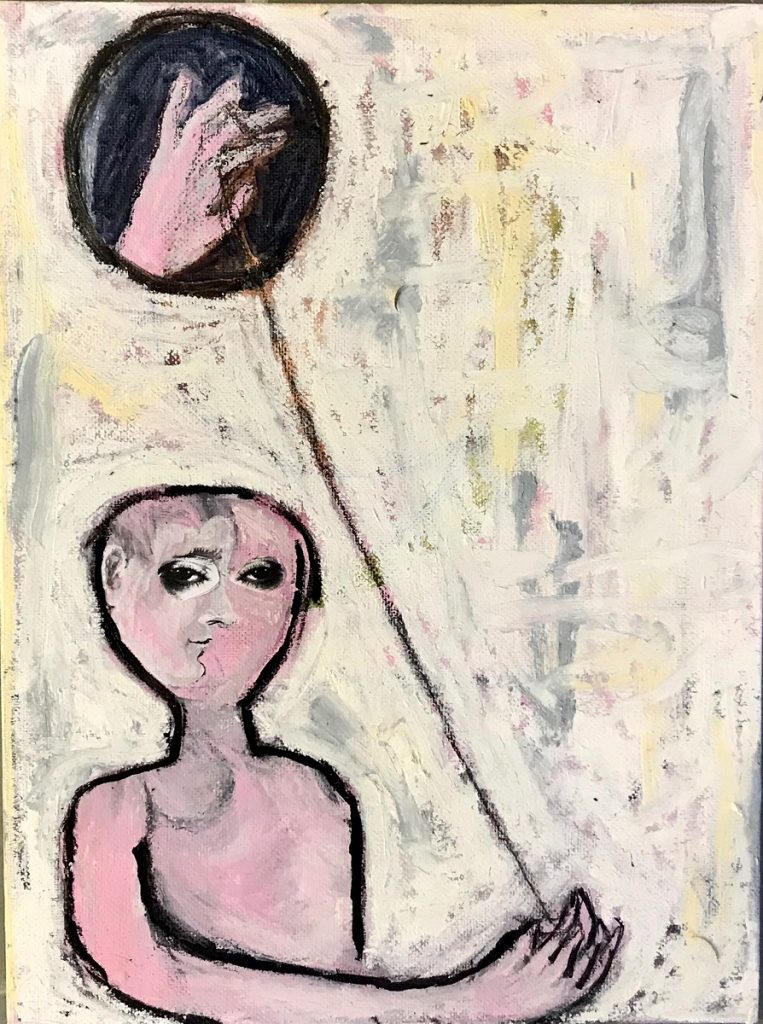 Exquisite Corpse is a drawing game invented by the Surrealist artists of the 1920s. A piece of paper is folded, into fourths. One artist draws a head and neck and turns the folded paper, so the drawing is hidden, with a hint of neck showing. The second artist draws the shoulders and torso before passing along to another artist. After the feet are realized, the paper is unfolded and the resulting figure is the finished work, both random and collaborative.

Calling it “The USPS Art Project,” Massey’s initiative devised a nifty logo that riffs on the official Post Office eagle. After she posted an announcement on Instagram, the project was off and running. Each artist chose a partner (to date there have been only twosomes, no threesomes, and Massey herself partnered with Jaynie Crimmins, who, fittingly, incorporates junk mail into her works). Each artist makes a drawing or relief object, and all must conform to the size and weight requirements of USPS mailing rules. Artists then trade drawings by post, each “finishing” the work they had been sent. Massey then requested that each artist post the drawings on social media using a uniform set of hashtags to amplify the project’s reach and power. 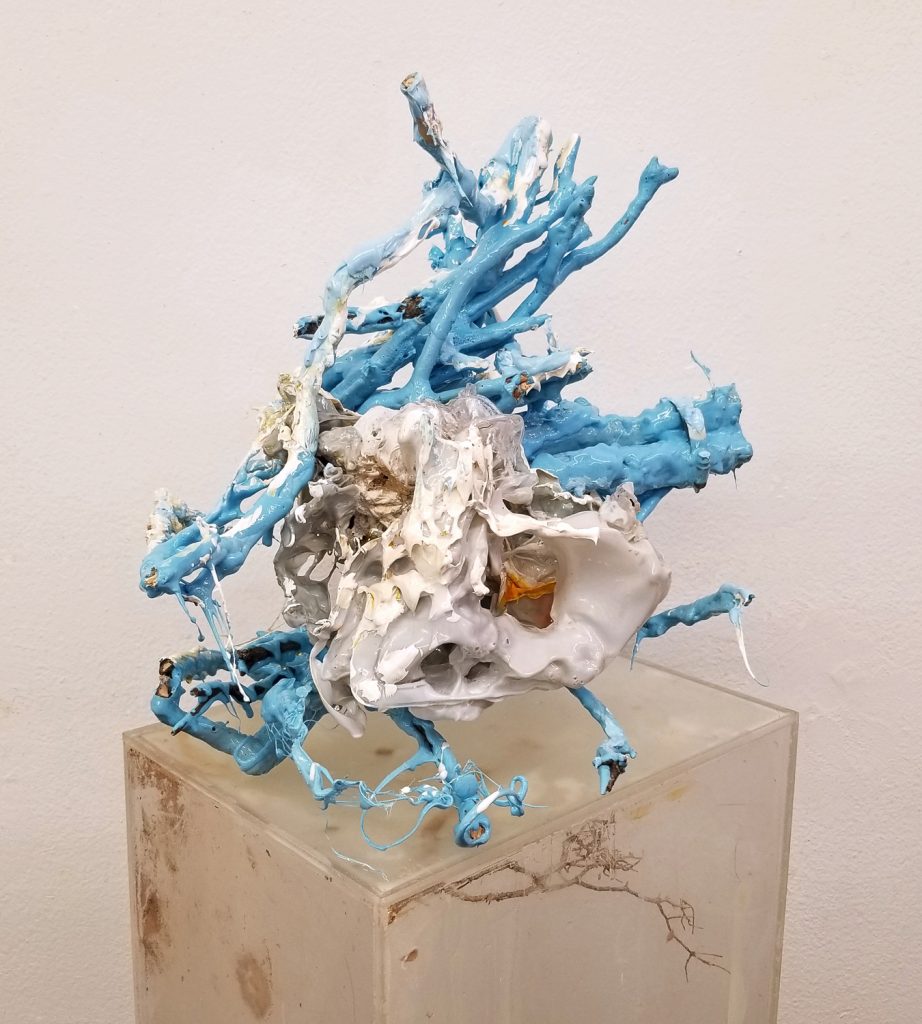 Bonny Leibowitz collaborated with Walter Brown to make After Before, plastic, branches, foam, acrylic, metal, 15 by 18 by 17 inches

The USPS Art Project launched at the perfect time. Many were in lockdown around the country, unable to get to their studios and feeling isolated. Massey’s initiative, by definition, forges connections between artists and this ability to connect through their work has been a much-needed balm for who reacted badly to the constraints imposed by the pandemic and/or had trouble making their work.

The results have been startling and delightful—both artistically and as social protest. As of June 30, Massey reports that roughly 400 artists have participated, and it has proven to be a little addictive in that many have participated in two or three collaborations. 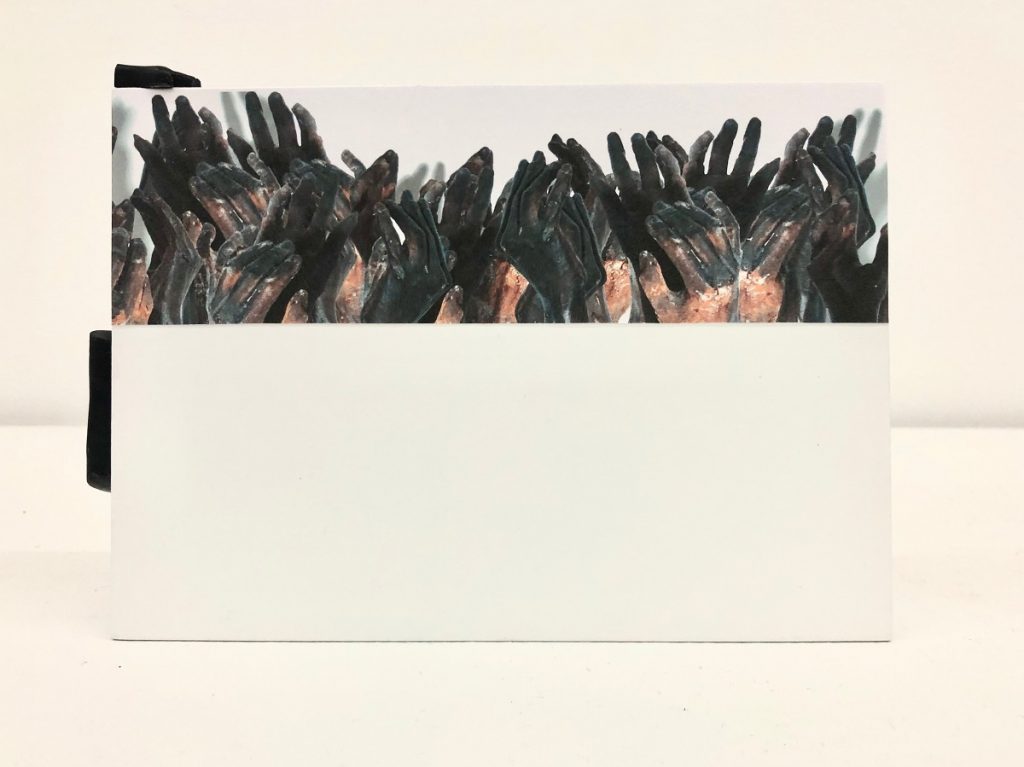 I collaborated with artists Yura Adams and Matt Nolen, collectively producing four final drawings.  All three of us work in very different artistic modes and the chance for all of us to play with one another’s work brought us closer during some dark days this summer. Plus it was fun.

Give an artist an “assignment” with loose parameters and you are bound to get an extraordinary amount of visual diversity. As seen from the images here, the resulting artworks range from the deceptively minimal to the baroque. The curatorial reception has also been exceptional.  Massey has lined up three venues to show the physical artworks. Up to 400 of the objects will be exhibited at The Pelham Art Center in a show that opens August 1, with strict social distancing requirements. The Ely Center for Contemporary Art in New Haven, CT, will host the show from September 13 to November 1, and the third destination is Sunset Art Studios in Dallas, TX, October 1 to 31. The application to all these shows is free and the shows will be curated on a first-come-first-serve basis. More information on the project and forthcoming exhibition venues can be found here. 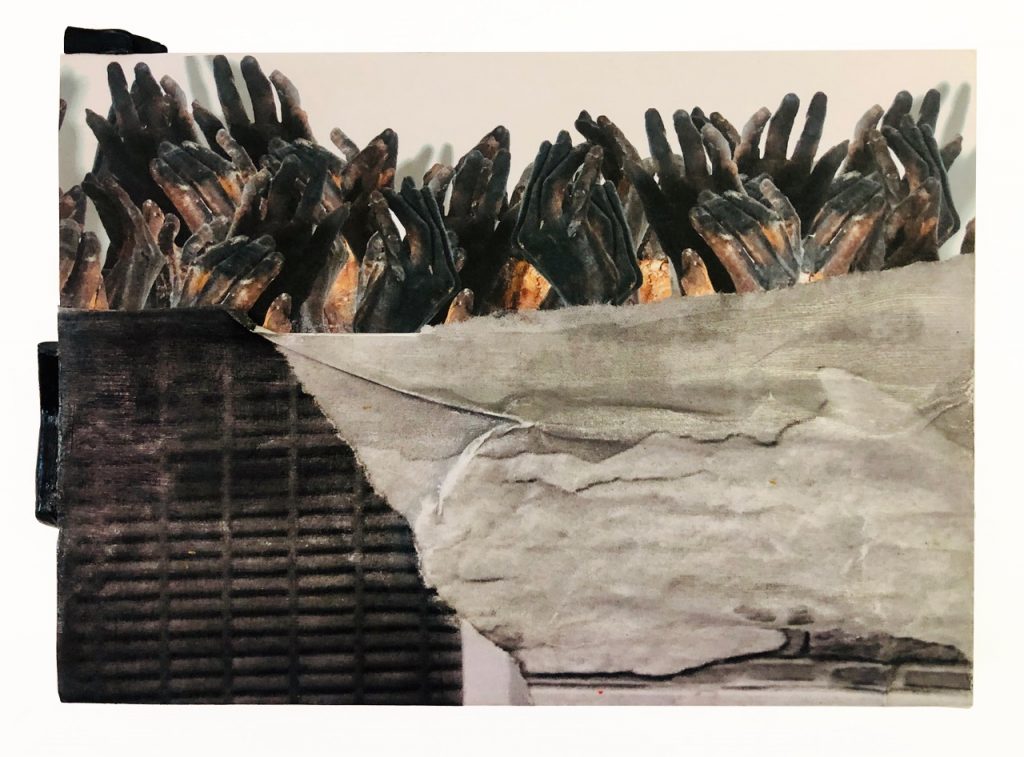 “Some people don’t want to show the work,” Massey notes. “They simply enjoy the process aspect. 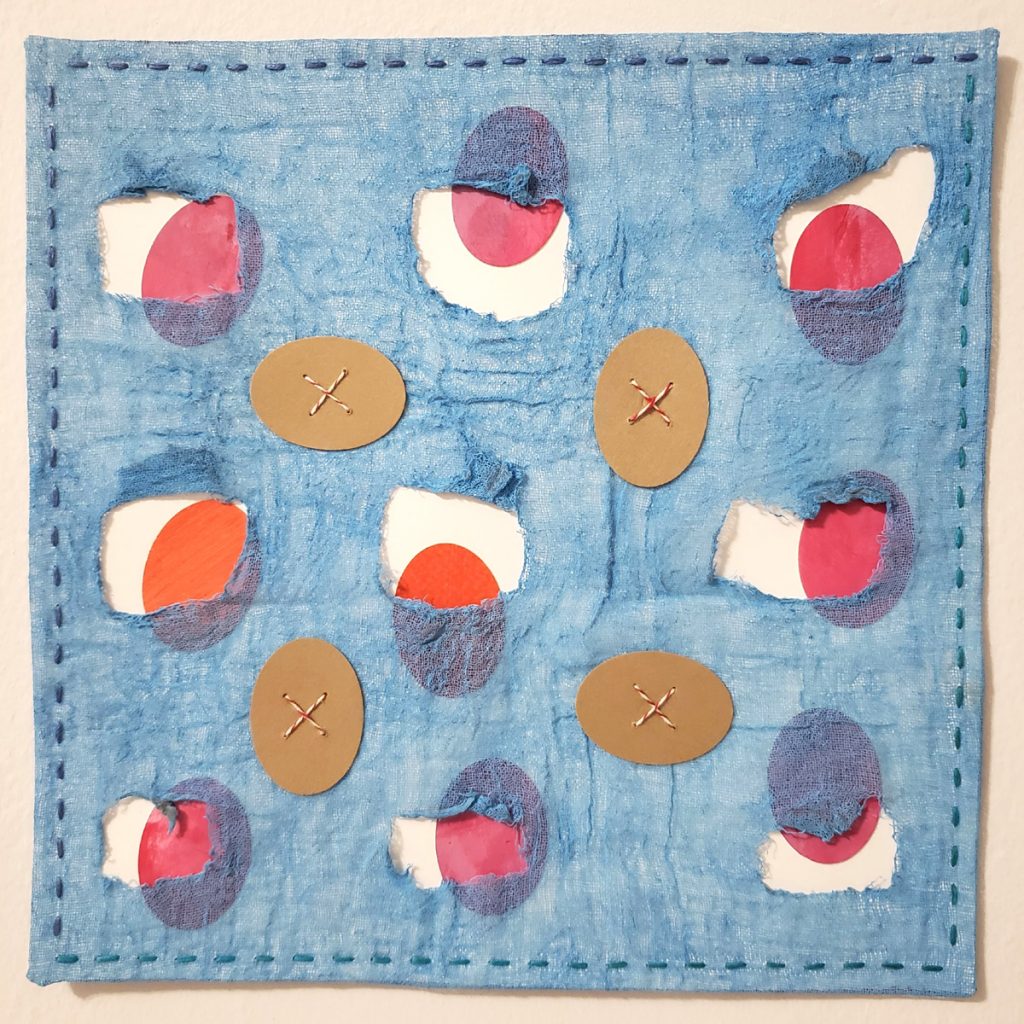 Barbara Lubliner and Priscilla Stadler, who both participated in this year’s Art in Odd Places exhibition, collaborated on a mixed media collage called Now, fabric, paper, thread, 12 by 12 inches

Massey has tried repeatedly, using a variety of platforms and media, to reach the USPS to make them aware of the project and hopefully enlist some form of official support.  After several futile attempts, she did engage in a brief dialogue with an official at the postal service, but they prefer not to comment, perhaps figuring that a cautious and quiet stance is the safer strategy in the face of a possible Trump privatization of the agency.

The USPS Art Project is a truly democratic endeavor. Absolutely anybody and everybody can participate in the ongoing online exhibition and/or send work to be considered for exhibition (the Pelham show is now closed, however).  This is artistic democracy at its best, and a perfect community-based project for the strange times we’re living through.

The cost of entry? Well, a postage stamp.