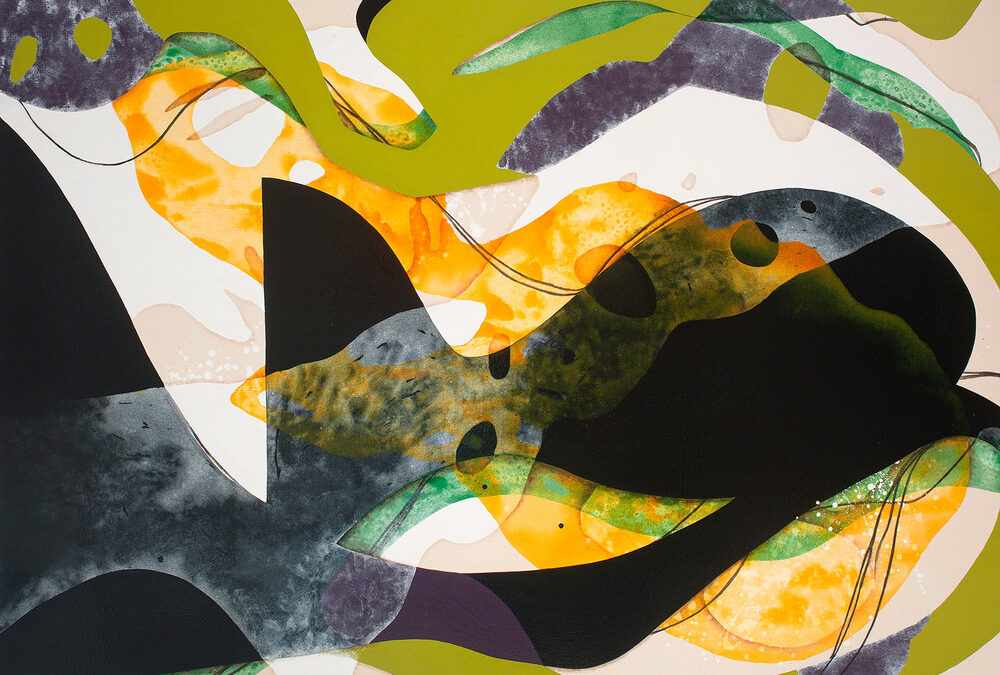 As a painter myself I am drawn to the work of other painters first and foremost.  Especially those who demonstrate a dedication to a lush, hands-on, painterly approach and an emphasis on refined craft and detail.  For this curation I have chosen six painters who are known for combining different paint and material techniques.  Each features bold pictorial mark-making, resulting in an expression of non-representational symbolic language and signs, while extending from edge to edge on the canvas.  These are painters whose work I have seen in person and/or have had the chance to interact with one on one; they are about my age or older, and are actively working today. 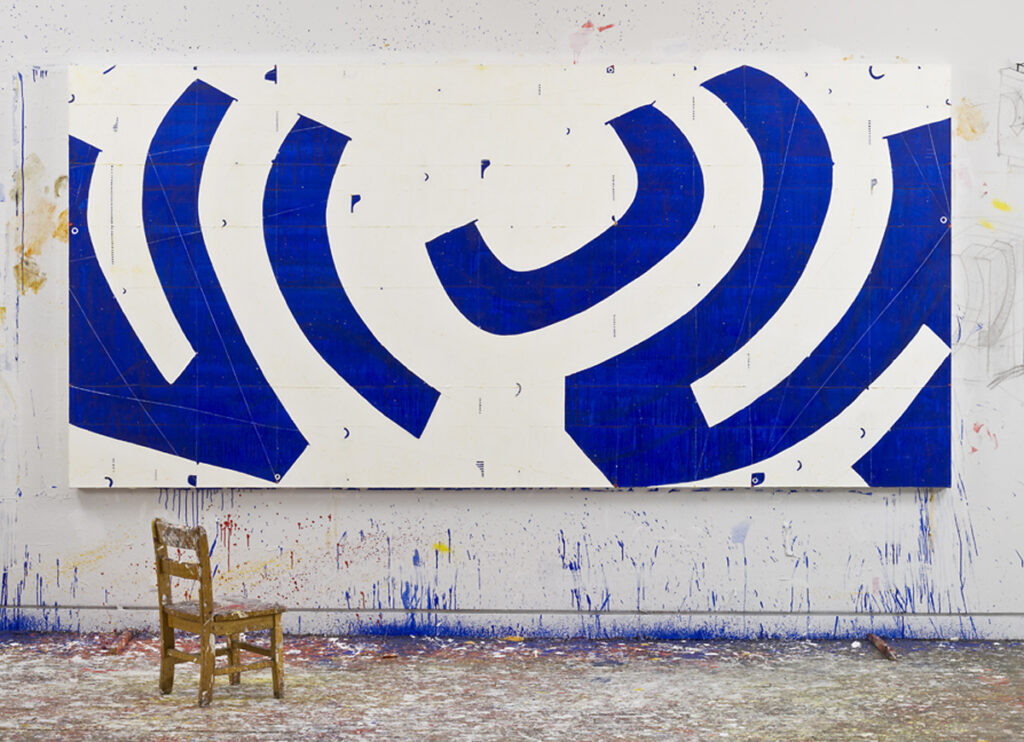 Fonseca grew up in a family of artists and currently splits his time between studios in New York and Pietrasanta, Italy.   His father was the well-known architecturally trained Uruguayan sculptor Gonzalo Fonseca and his mother, Elizabeth Kaplan Fonseca, was a talented painter in her own right.  Fonseca’s work combines flat, hand-applied, hard-edge, over-and-under layering with bold shapes informed by his training as a classical pianist and composer.  Fonseca uses various tools—such as ravioli cutters, pastry cutters, and stitching wheels—to create a linear connecting structure that at times resembles the process of composing handwritten sheet music.  Fonseca generously provided a helpful tip on the use of material when I first started painting, and it’s one that I continue to use to this day. 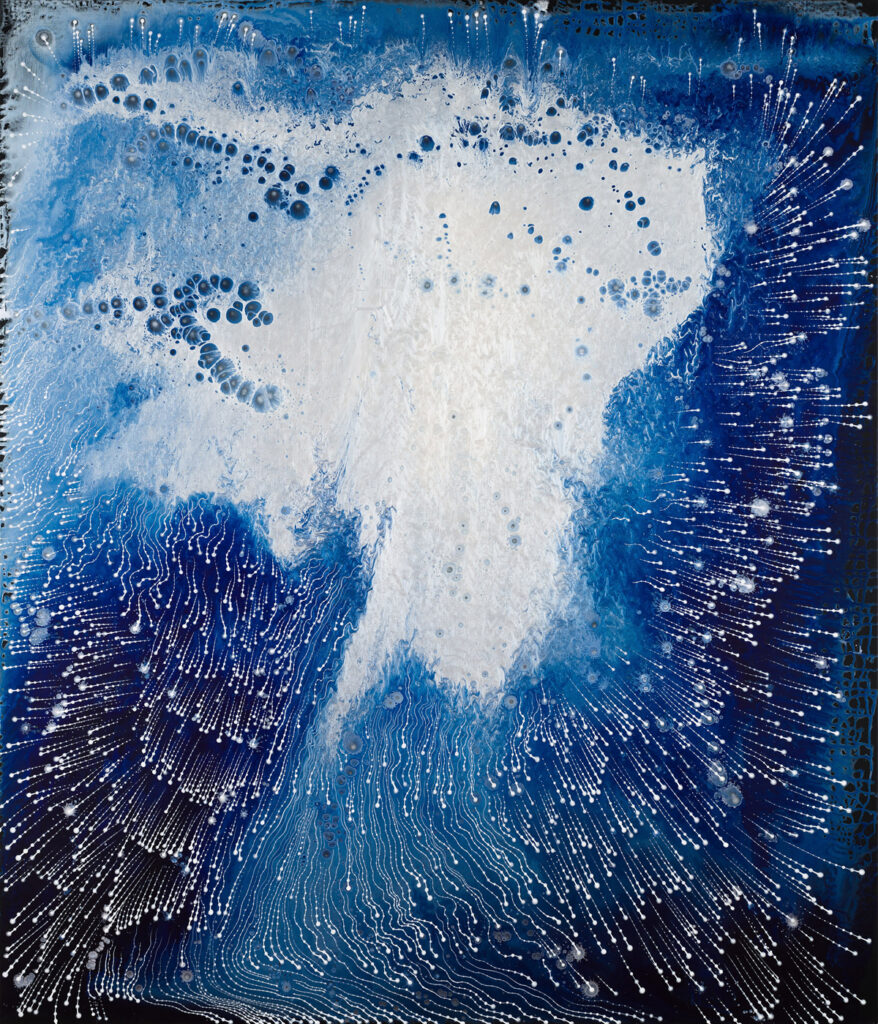 Takenaga is a recipient of a 2020 Guggenheim Foundation Fellowship and is represented by the DC Moore Gallery in New York. Her work combines laborious hand work with chance, intuitive observation, and imagination.  Combining lush lava flows of poured paint with skittering beads of tracery, Takenaga pulls us into a visual aesthetic of beauty and excess.  Her work could easily set the theme for a psychedelic journey into the anime mind of the cosmos. I use the word “anime” with all the awe, respect, and wonder of a unique Asian ability to capture the spirit of nature in all things—and then quietly reflect it back to ourselves.  Her paintings are a must-see in person; images do not capture all the texture and glorious obsessive detailing. 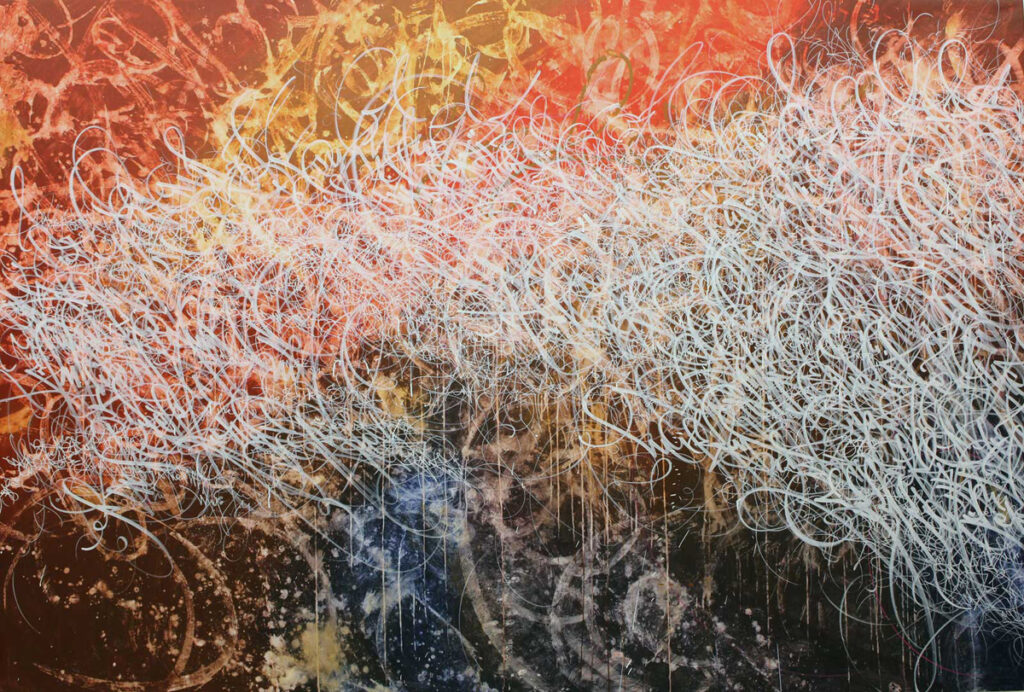 The first time I saw Brooklyn based José Parlá’s work was in 2013 during a lecture by Craig Dykers, the founding partner of SnØhetta Architects. If you’ve ever walked through the redesigned urban streetscape in Times Square, then you know the work of SnØhetta.   Parlá and SnØhetta have a long history of collaboration as each is on the same wavelength when seeking strength in symbolic language be it through an arabesque swirl of paint across a canvas or an embedded pattern in a stone walkway keeping everyone directed and safe from busy urban traffic. Parlá has managed to transform the language of the street into a hybrid form of high abstraction. Images captured of him while at work in his studio demonstrate him jumping and leaping at the canvas with brush in hand much like a Persian Scimitar or Solomon sword.  Other images depict frenetic mark marking while dashing and skipping across different parts of the canvas with only the quick movements of arm, elbow and hand.  Along with Parlá’s love of paint, I truly appreciate how each piece is an anthropomorphic record of his personal repetitive movements across the canvas. 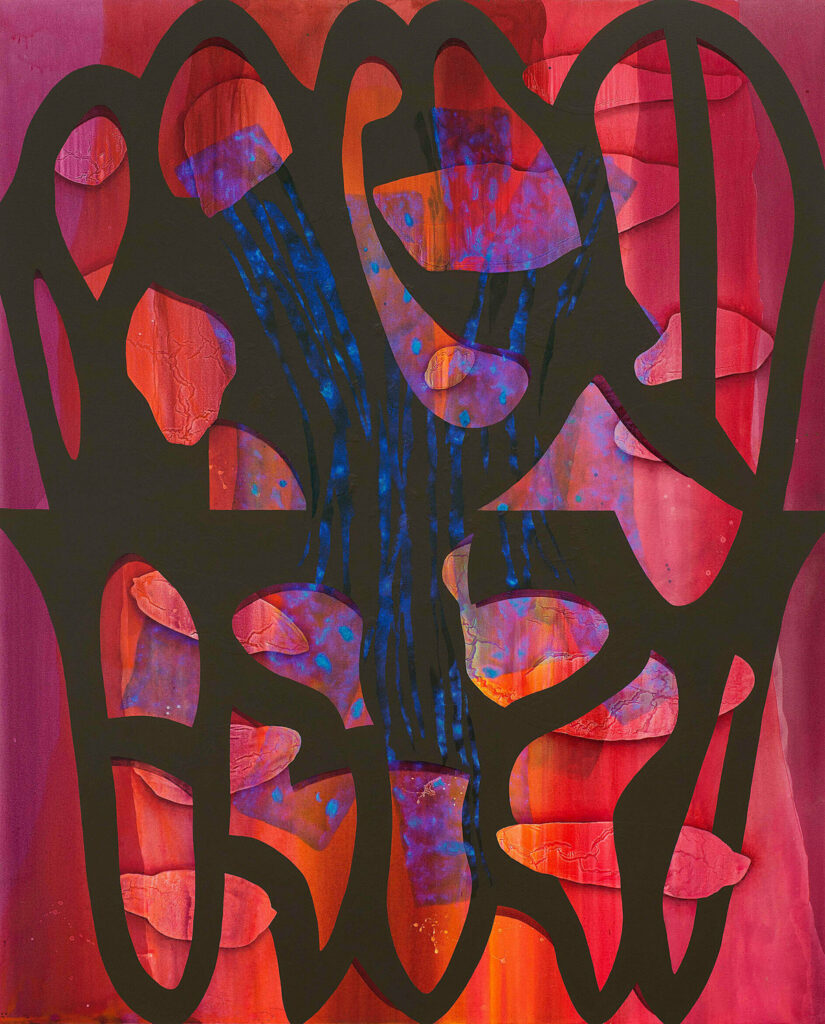 I first came upon Moyer’s work during a visit to the 2017 Whitney Biennial, which featured a show within a show of four large-scale paintings in a single quite interior room.  I was immediately taken by the exuberant expression of pattern featuring a mastery of so many acrylic painting techniques that it borders on encyclopedic. When asked about her process in conversation during a visit to the Nasher Sculpture Center in Dallas in 2019, she readily explains that she is a constant and restless innovator. Just don’t ask her how she does it—she  politely declines to divulge any secrets.  Moyer’s work seamlessly vibrates between the abstract and the representational in a such a way that the differences cease to matter.  Cross wiring ancient and contemporary pattern motifs, each piece results in a sultry drag-queen-like expression of bio-morphism.  Her unique titles for each piece are a must read! 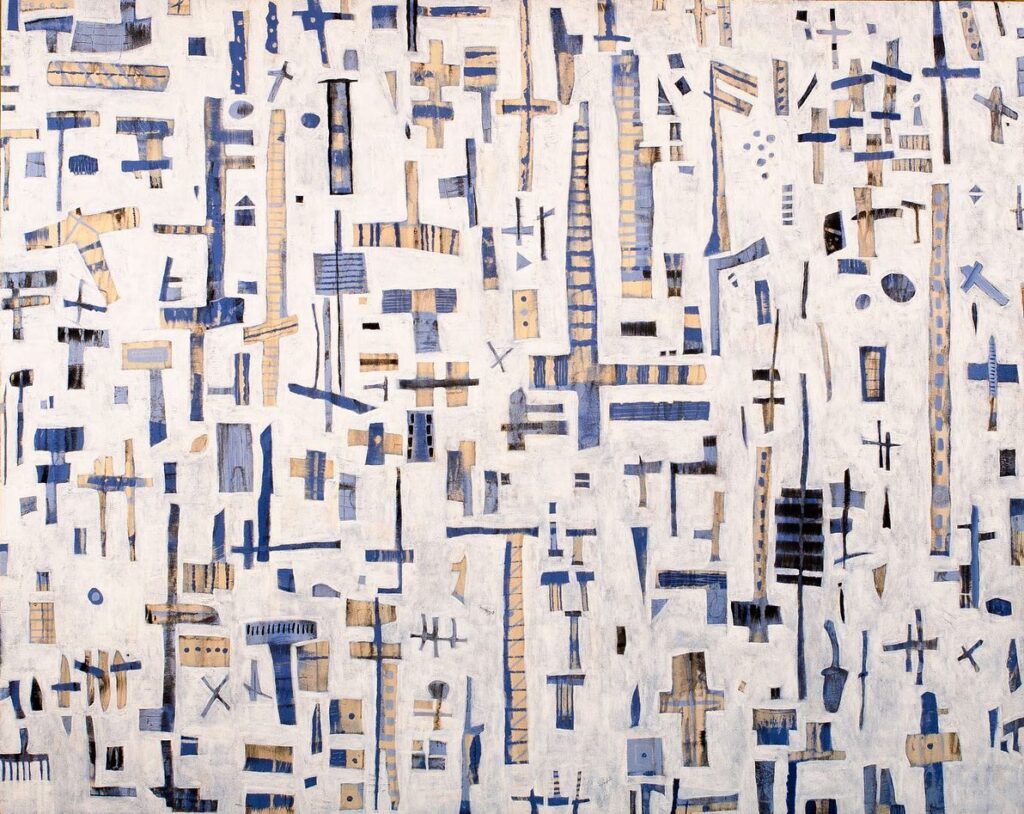 Swan is a Connecticut-based painter and and although lesser known among this group, this certainly does not diminish her true importance. I have gotten to know her and her work through a friendly exchange of images and messages on Instagram over the course of the last four years or so.  Each of us has watched the other’s practice grow and change.  We both share an affinity for pattern, mark making and creating visual symbolic language. As a teen, Swan emigrated from Iran to the US when she fled the revolution with her parents in 1979.  Her work often includes pictogram shapes that resemble airplanes, houses, flags, and street signage.  These are intended to reflect an immigrant’s simultaneous hope and despair while being forced out of a childhood home.  What drives her work is memory and emotion resulting in a personal autobiographical story. 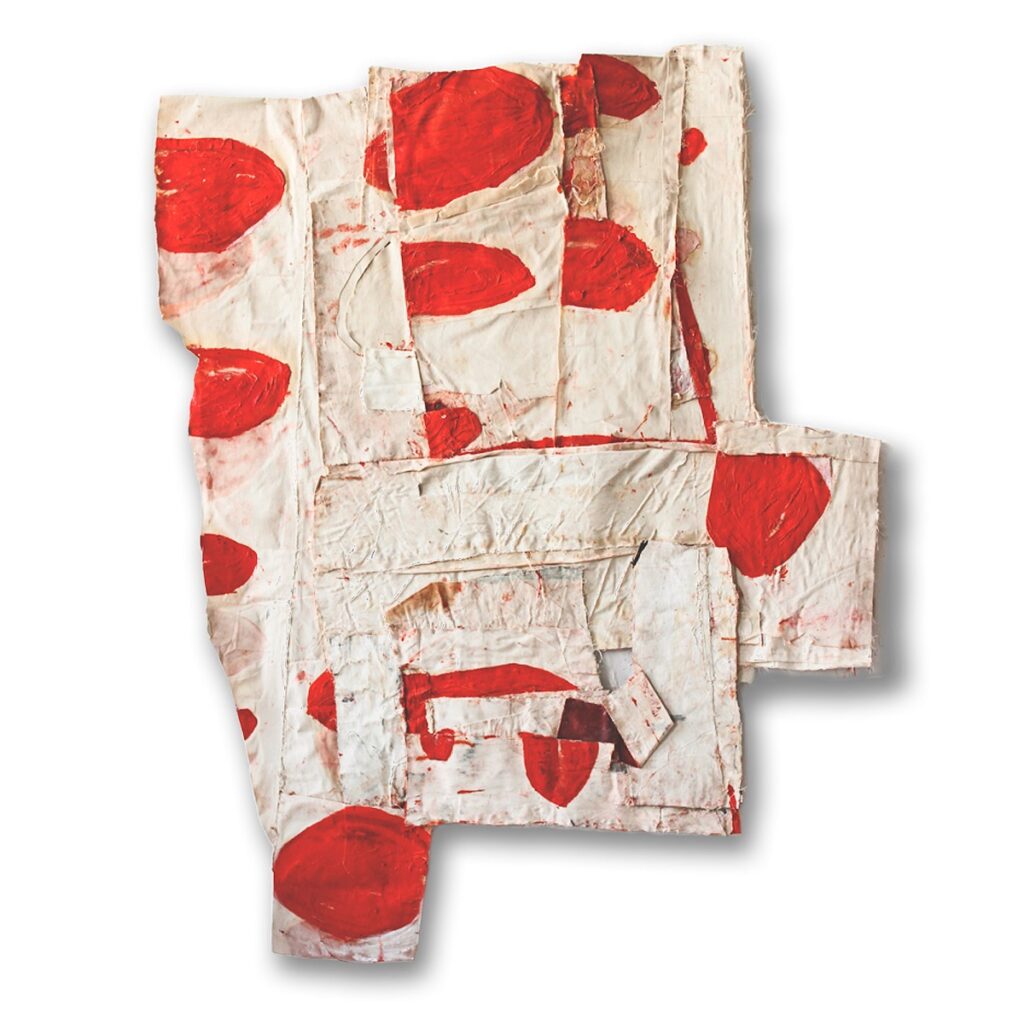 In 2014 I visited the booth of New York-based Howard Scott Gallery during the Dallas Art Fair, where I first discovered several of Zech’s loosely hung red and white paintings.   As I remember, Howard Scott was easy-going, genteel, and very pleased find out that an artist from Texas would take a deep interest in Zech’s constructed paintings. Zech, who lives and works in Berlin’s fourth borough of Charlottenburg, refers to her paintings as Bollenarbeiten or “Mound Works.” Heavily influenced by ten years in Africa, Zech explains in an article from Freunde von Freunden magazine:

“The Bollen paintings are intended to connect with their audience.  These works are about communication.  The single red Bollen are like elements of a piece of music, or flags, or skin that has been branded.”

Her paintings, which sprang to life after years of exploration, were first exhibited at Heidelberg’s Heidelberger Kunstverein in 2006. I appreciate this story as it is very similar to my own efforts to develop the “Bluestem” series of paintings, which were first exhibited in 2012 at the Fort Worth Community Arts Center after about 11 years of trying to figure out what my contribution to the language of contemporary abstract painting might be.

Lee Albert Hill uses a painting technique that combines foregrounds of hard-edged mark-making with informal assemblages of composition and background.  His lush application of paint is not only used for effects of color, but also for creating rich 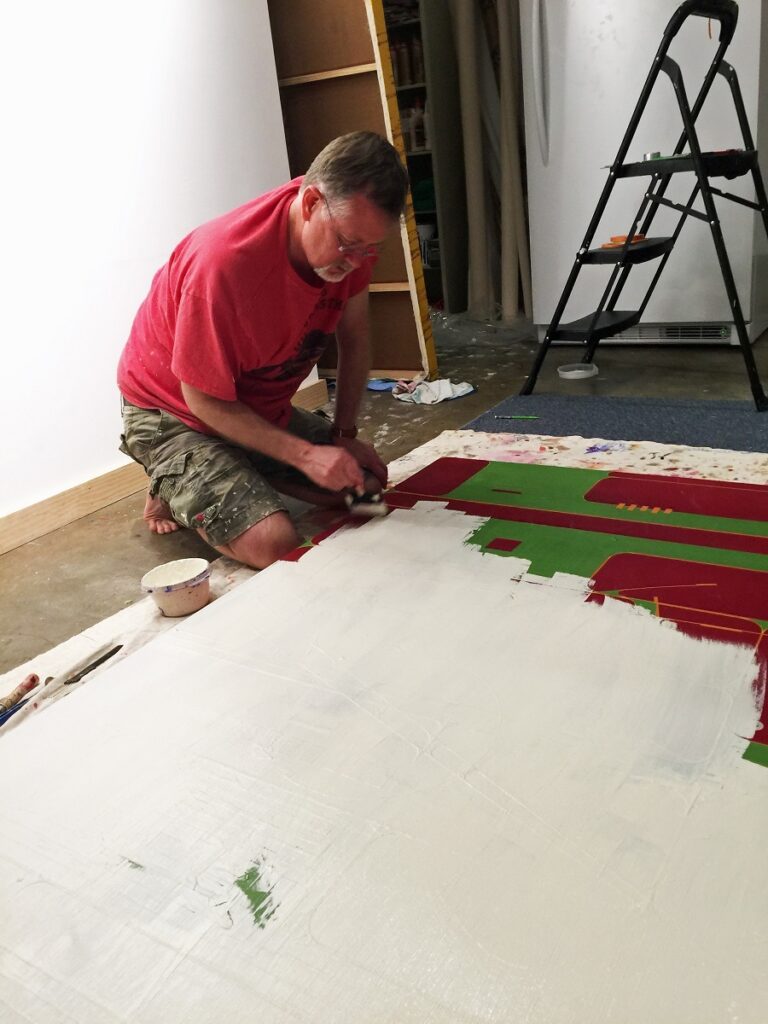 textural results. He has been a Texas-based painter for more than 20 years, with works in private and public collections, including those of American Airlines,  Loews Hotels, The Marriott Corporation, the TIFCO Hotel Group, and SAMTX Investments.