Fantasy Curating: Beyond the Book 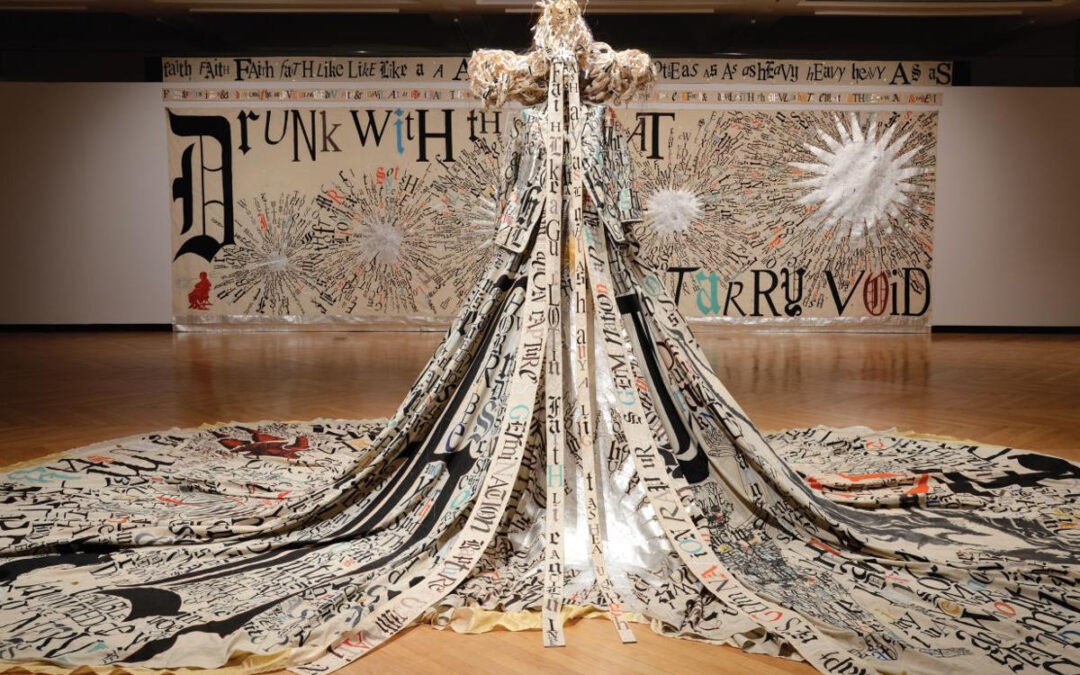 Think of a book and you usually have a specific image in mind, probably a codex form (pages bound in the center) with some combination of text and images, meant to be read from left to right. But when you list the components of a book, pick apart that list, mix it up, and reassemble the parts–then from a creative point of view things start to get interesting. “Beyond the Book” brings together some artists and ideas that offer compelling investigations into the book as a creative format.

The term “artist’s book” usually refers to an independent artwork, conceived specifically using the book form, and often published by the artists themselves.  It is neither an art book (a collection of reproductions of artworks) nor is it a book on art (critical writings or theories). Instead, it can function as an artwork inspired by any aspect of the book form.

A book can be a visual, conceptual, or formal object, which may have personal or historical importance.  It can be a container of ideas, symbols, and narrative that exists on an intimate or a grand scale. It can be unique or mass-produced. The physical structure of the book has endless possibilities.  Throughout history there are various book formats such as Accordion (folded), Codex (single- or multiple-edged binding), Scroll (continuous), Fan (bound in one corner), and Blind (bound in two corners).

Gary Hill, David Mach, and Doug Beube are included in my fantasy exhibition because of their unique conversions of found printed materials.

In Hill’s video installation I Believe It Is an Image in Light of the Other, pages from Maurice Blanchot’s The Last Man are illuminated by projected video imagery. Text and image are combined to layer a human presence into the book. 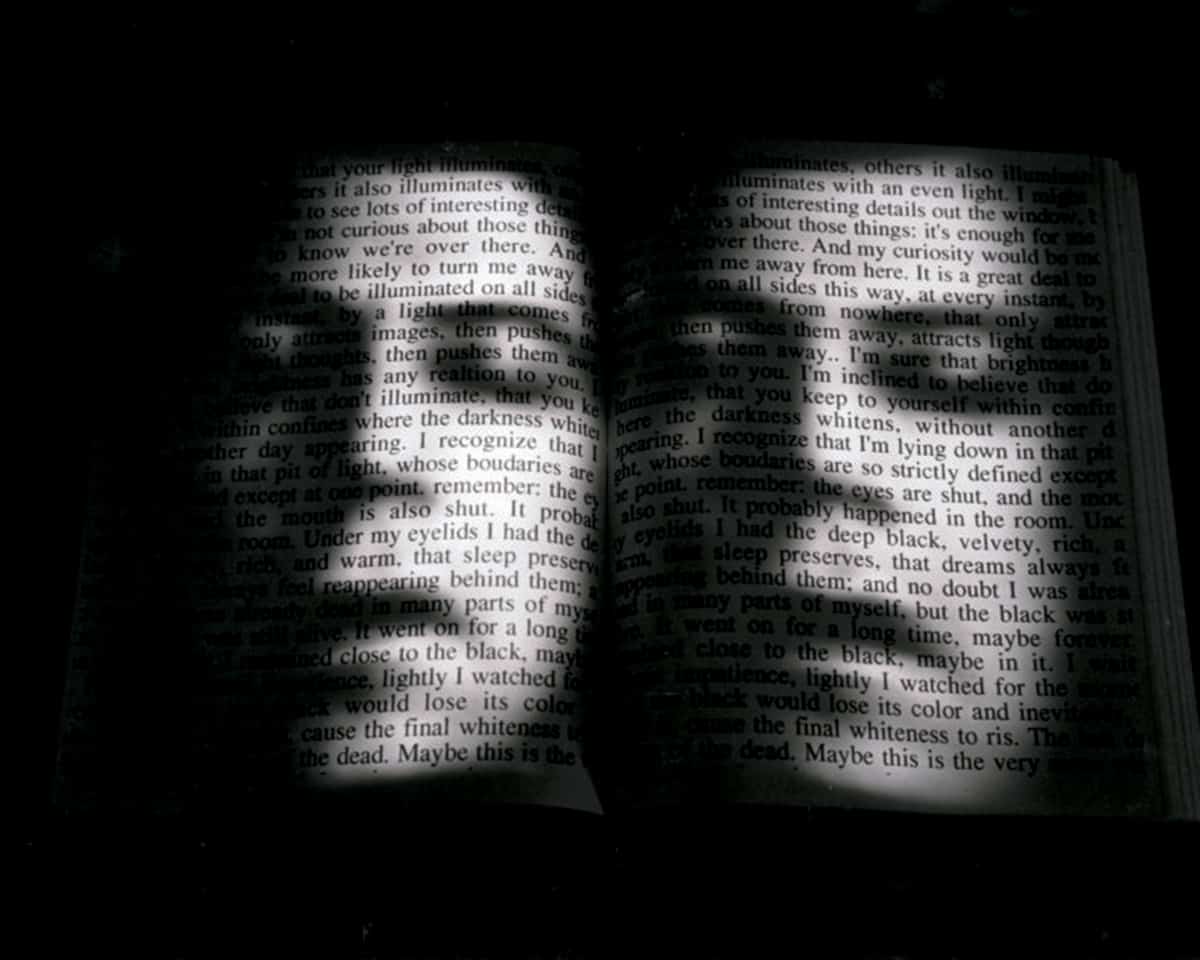 Gary Hill, I Believe It Is an Image in Light of the Other, 1991-92, mixed-media installation

Scottish sculptor David Mach creates installations with a flowing surf of magazines, engulfing whole objects such as cars, furniture, and airplanes, in what amounts to a critique of popular culture and media saturation. 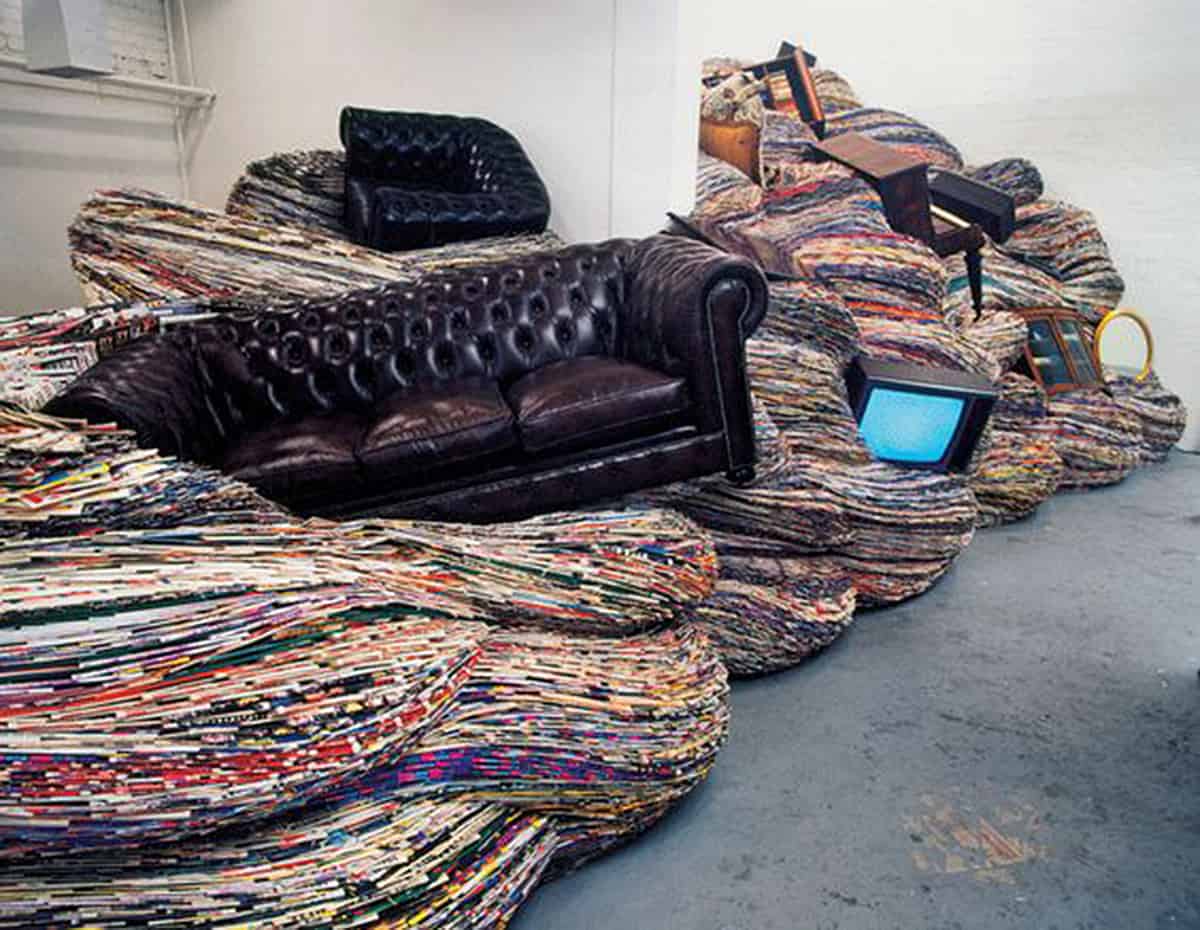 David Mach, Fuel for the Fire, 1986, installation of magazines and furniture 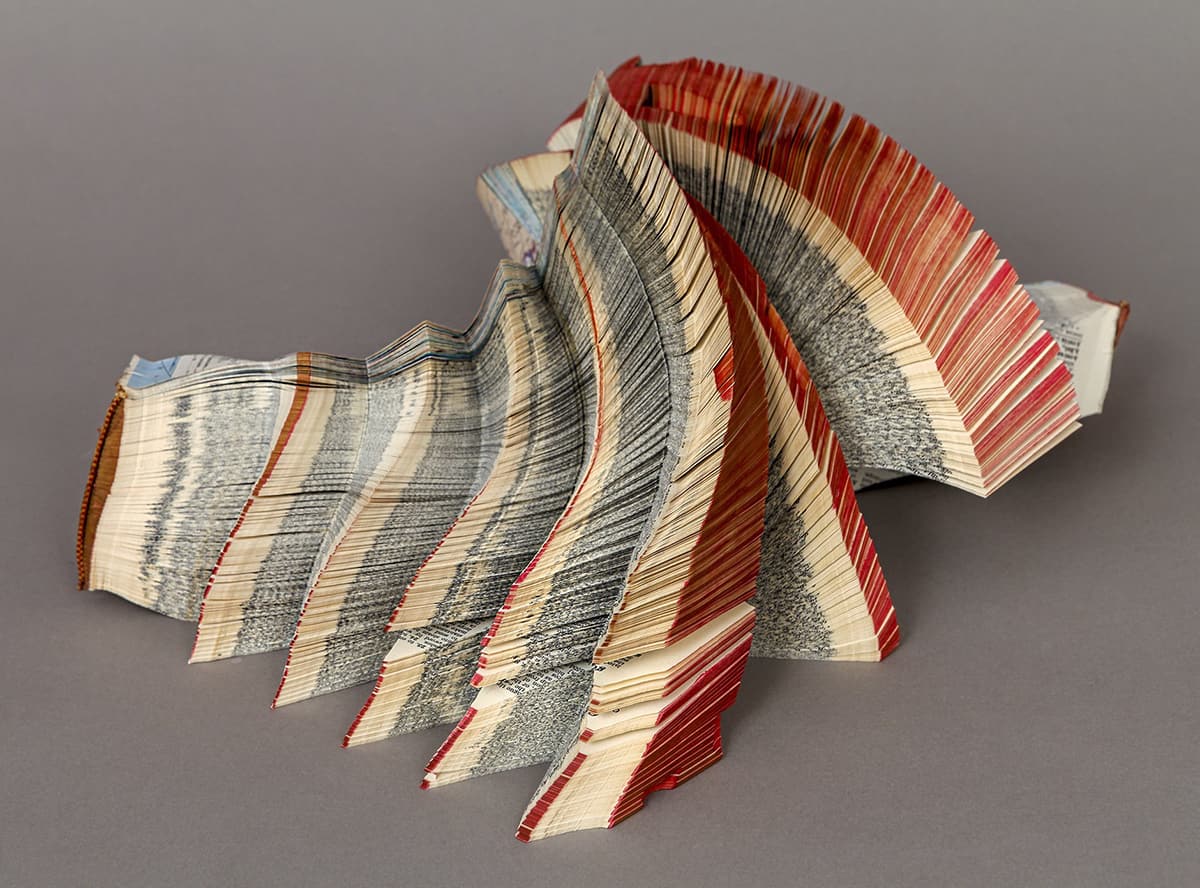 The book as a surrogate for the human body. Text and surface are transformed by Lesley Dill into three-dimensional dress forms that stir the relationship between words, ideas, poetry, and the human condition (below and at the top of this post). 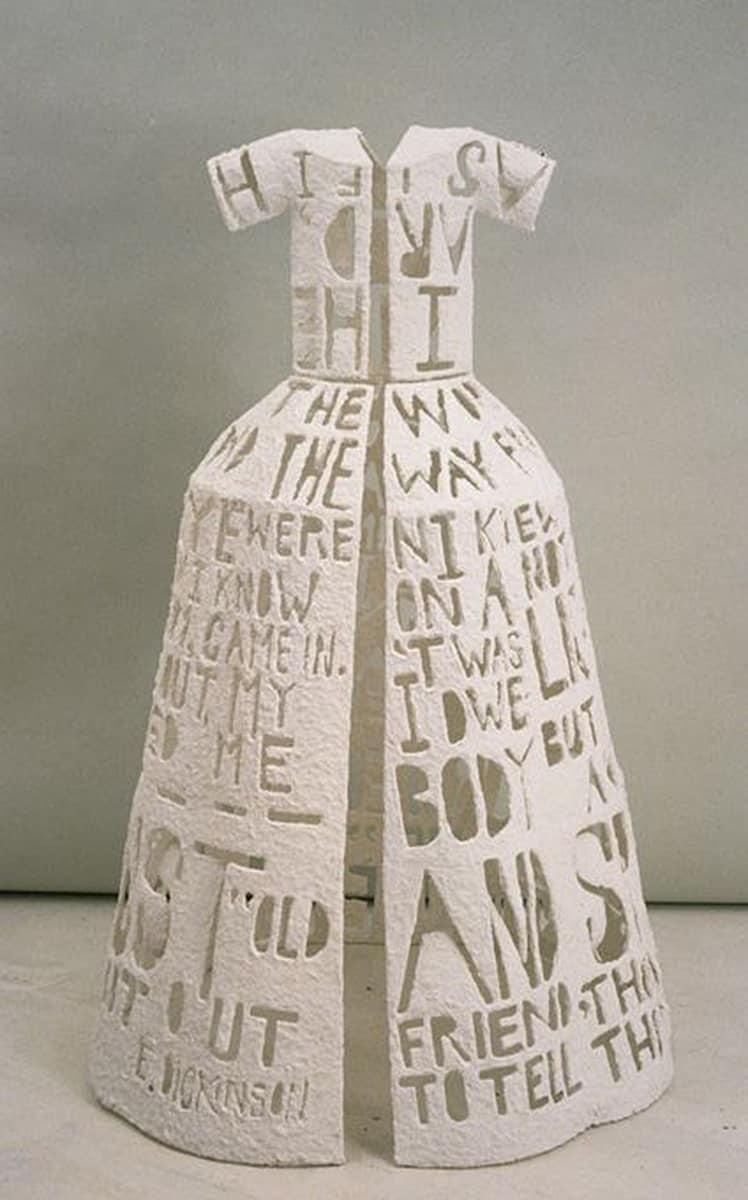 Landscape as book. Ian Hamilton Finlay was first and foremost a concrete poet. His garden in the borders of Scotland is bustling with sculptural ideas, full of words and bits of signage that embrace the presence of language, but with half-hidden meanings from history and literature. 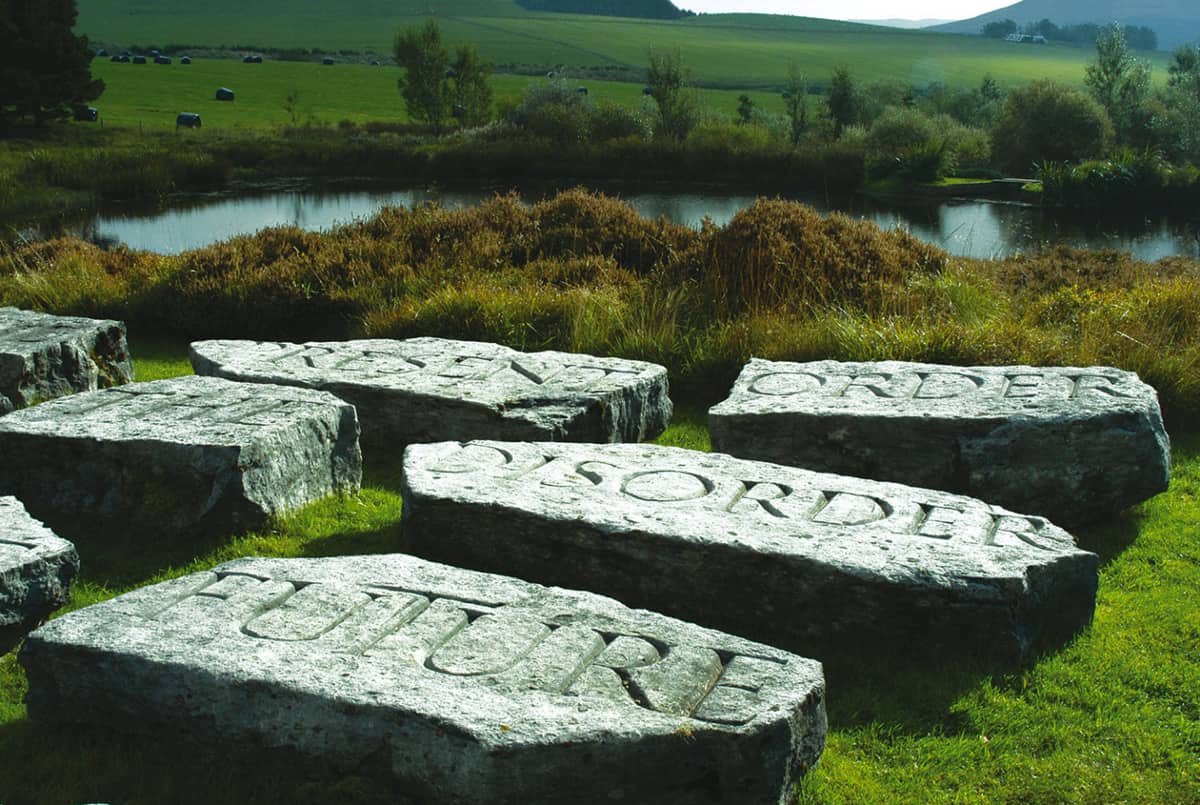 Who is beyond the law? Who is free to choose? Who speaks? Who is silent?  Barbara Kruger invades a public space with questions about democracy, power, desire and consumption, an intervention of garish headline text, like an exploded glossy magazine.

The book as cultural critique. Lothar Baumgarten’s installation of text transformed the spiral surfaces of the Guggenheim Museum into a study of threatened and lost cultures. 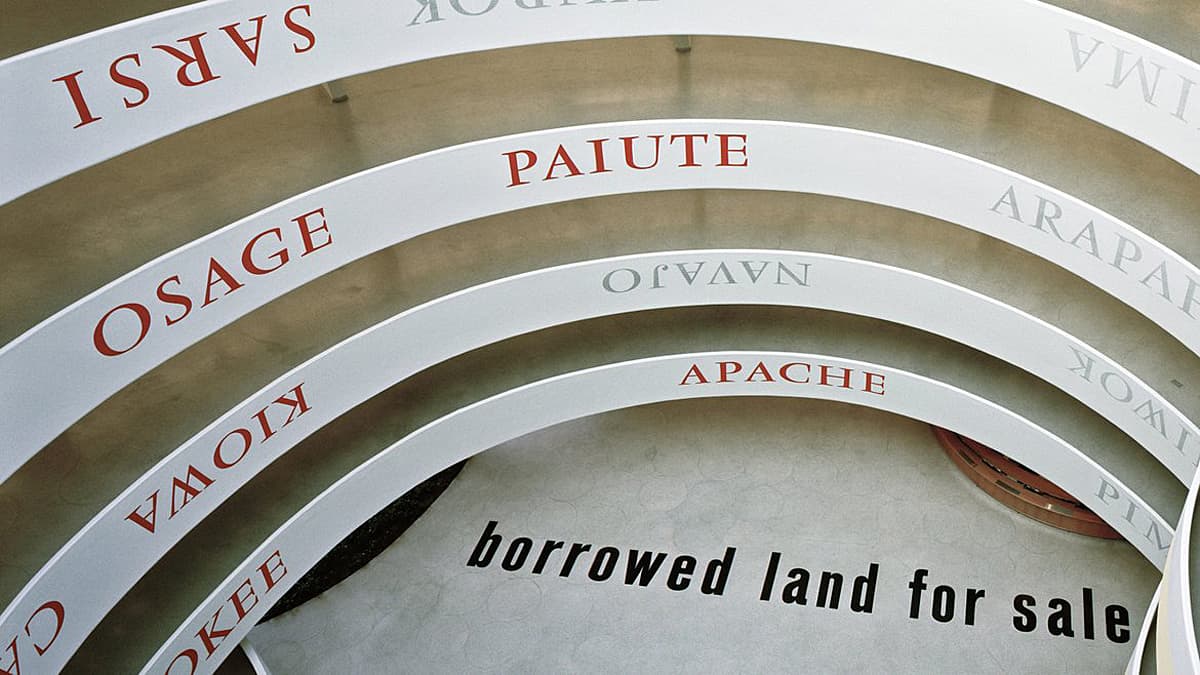 The gallery as book. In my installation Rewired, four-by-eight-foot sheets of cast paper, embossed with rusted shapes, were physically stitched into a small gallery space, allowing the viewer to walk inside a book. 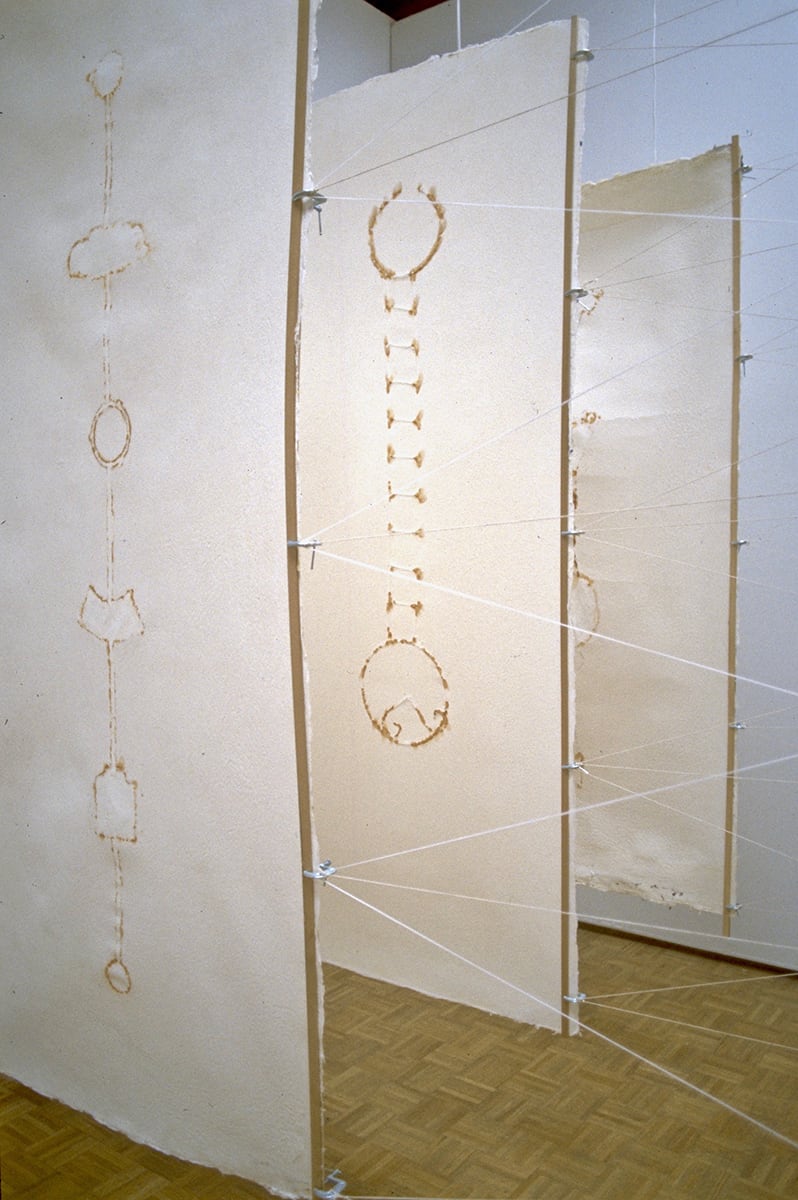 The book as performance object. Cornelia Parker and Hunter Reynolds have taken aspects of the book and manipulated them to create the focal point of a performance.

Dictionary definitions of the word “gravity” were cast in lead and thrown off the Dover Cliffs in England by Cornelia Parker. Text, material, and performance are wittily combined to question their own meaning. Head-scratchingly satisfying. 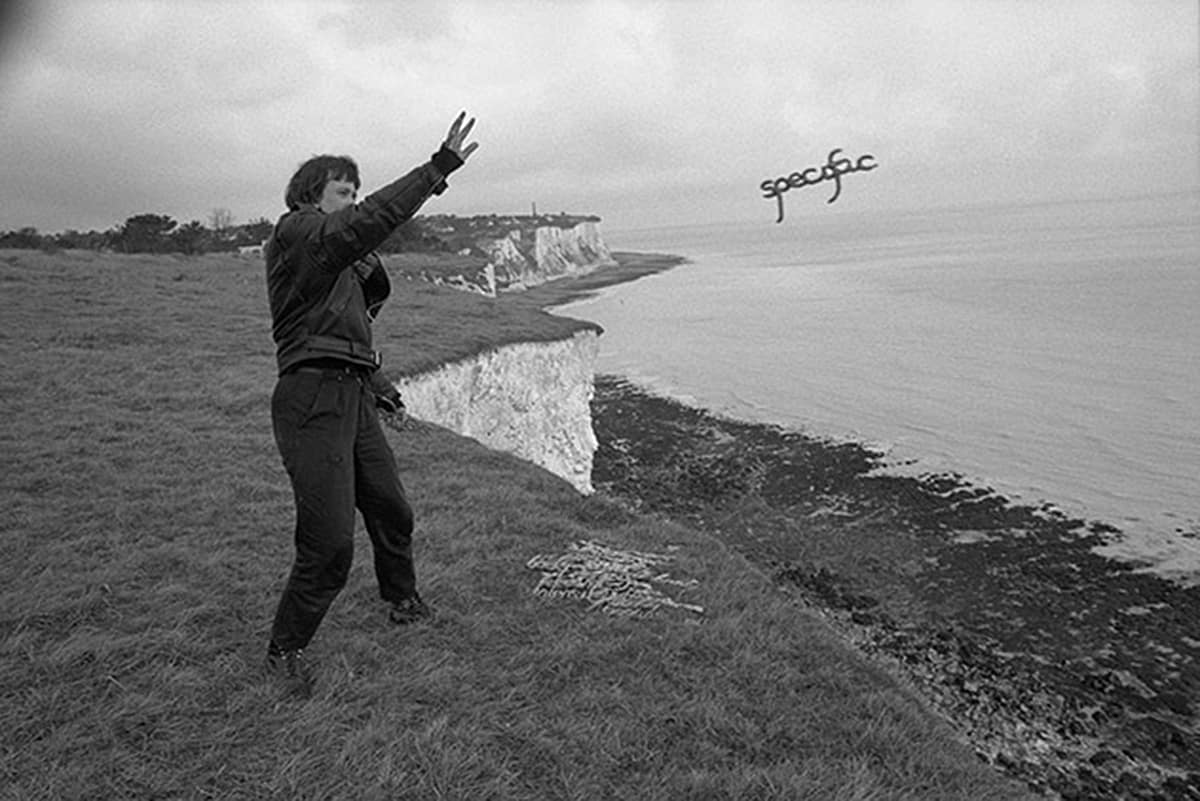 The book as performance, document, memorial, intimate object.  Since 1989, Hunter Reynolds has been using performance, photography, and installations to express his experience as an HIV-positive gay man in the age of AIDS. Lists of AIDS victims are silk-screened onto the page/ silk to construct a book/dress. 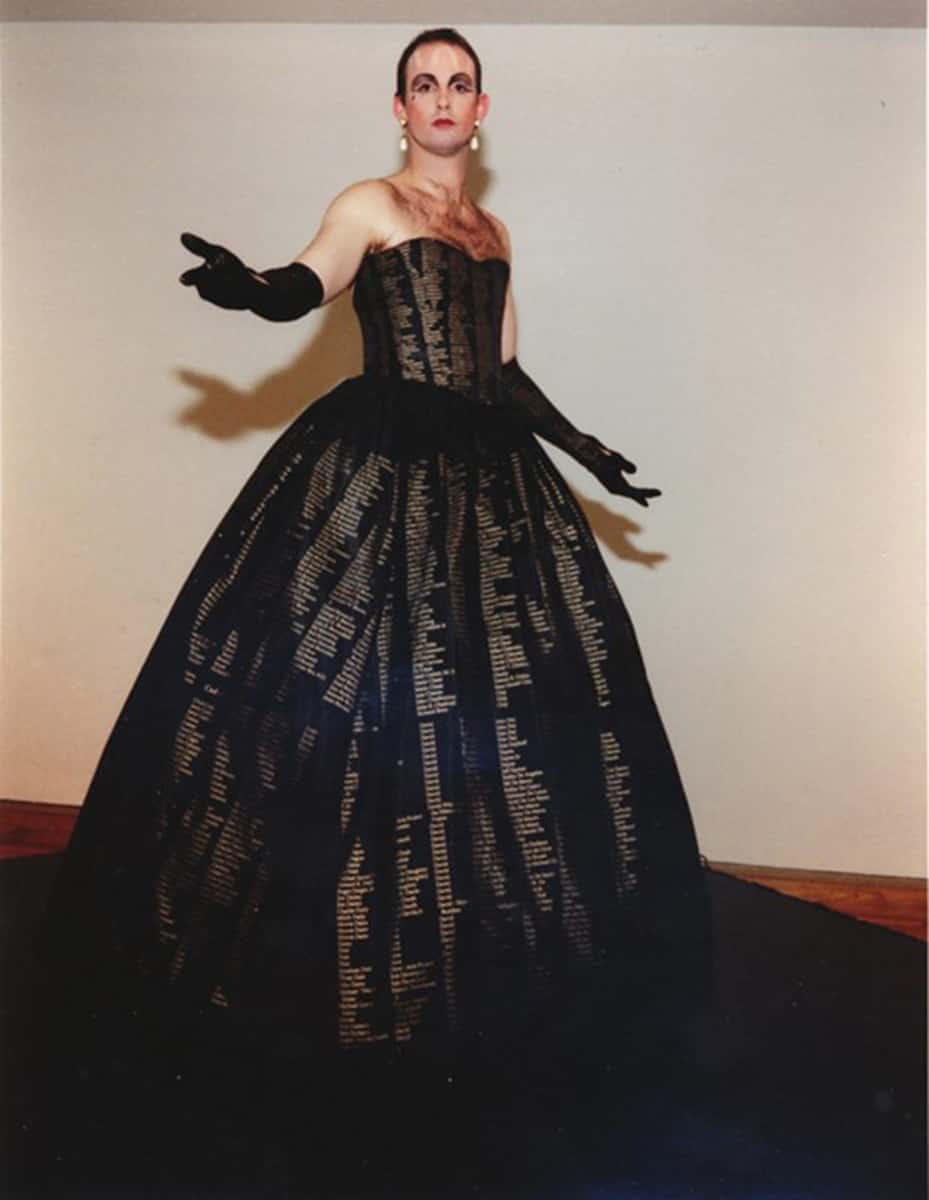 I don’t expect you to agree that these artworks could be considered books, but if you look at a working list of book components (surface, text, image, time, sequence, rhythm, movement, change, scale, layers, fragments and a whole) then any combination of those parts could create a new definition of what a book is and could be as an art statement. That’s my story and I’m sticking to it.

Iain Machell is an artist and professor emeritus of fine art at SUNY Ulster, NY.