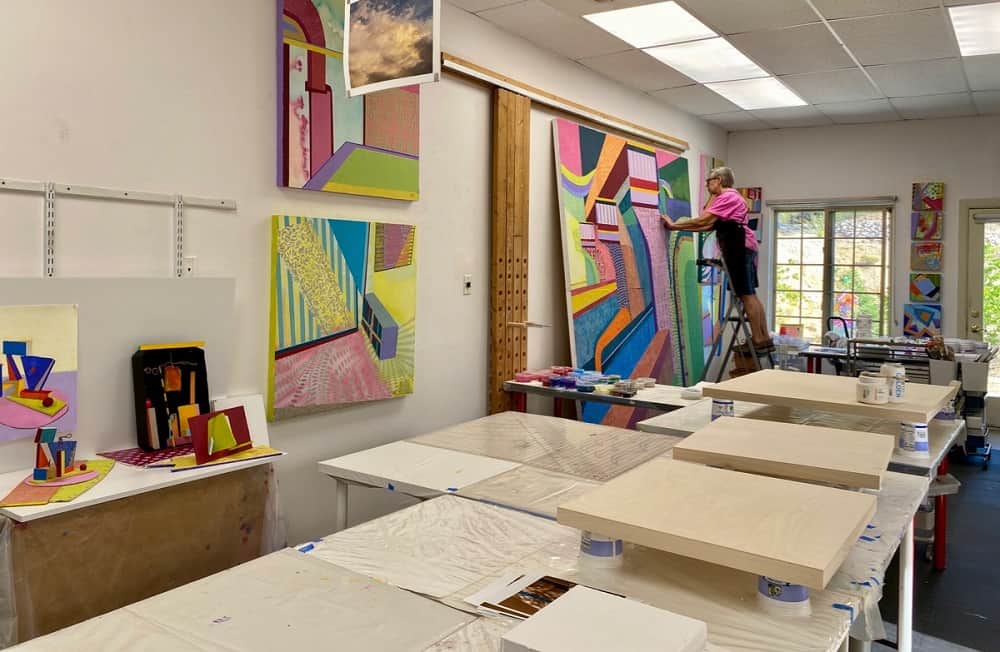 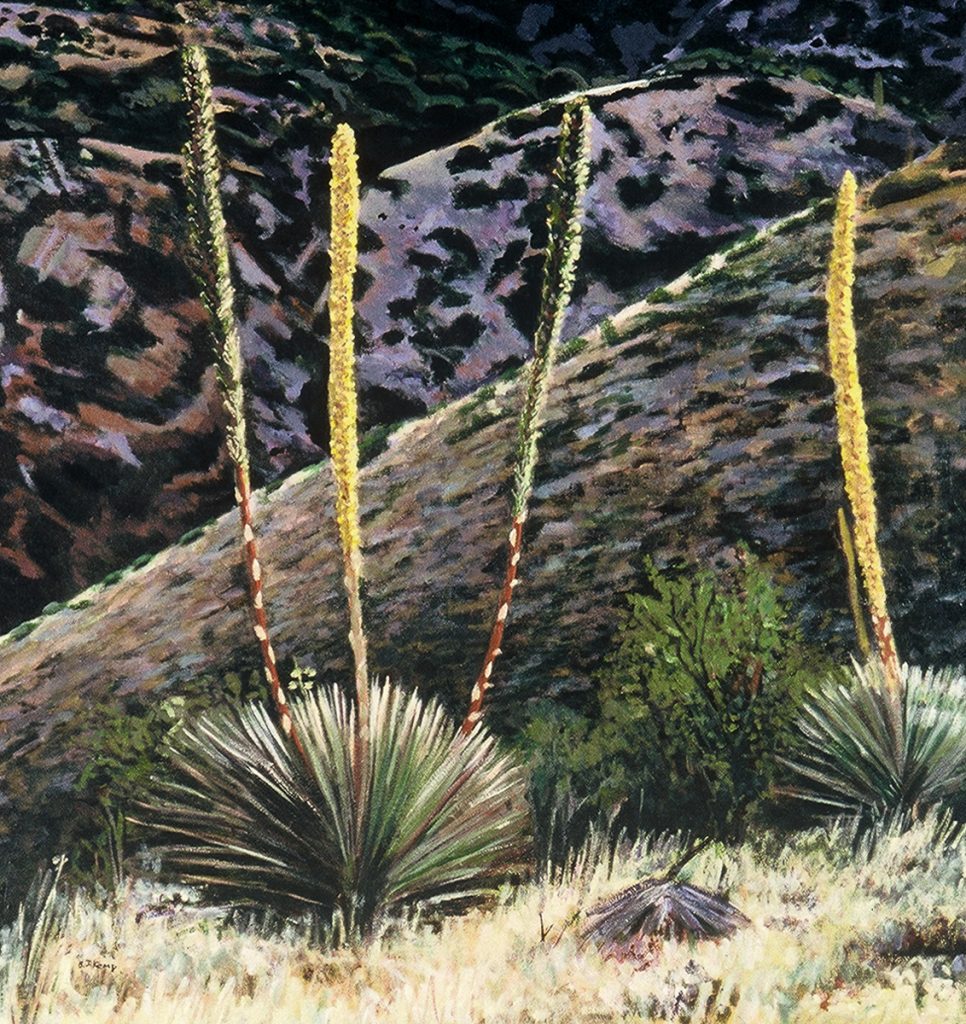 One way or another, many artists end up following a circuitous path to maturity, but Barbara Kemp Cowlin seems to have stumbled across more landmines and detours than most, partly because of fate, partly because of the times in which she came of age. She moved frequently as a child, and landed in the Bay Area for her senior year of high school in the late 1960s, when the counter culture was in full swing. “I went from a school where the boys wore coats and ties, in mainline Philadelphia, and the girls wore Ladybug dresses. When I arrived in California, the girls were wearing halter tops and combat boots. I couldn’t even get to Berkeley because of all the riots.” 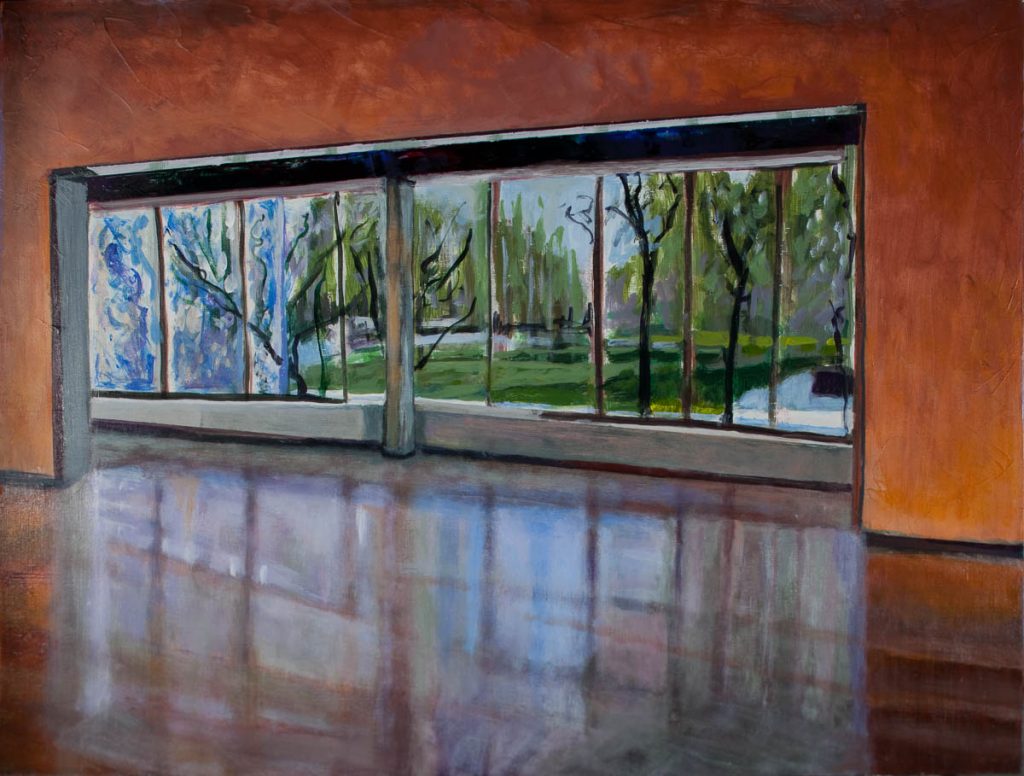 Though reluctant to attend college on the West Coast, Cowlin ended up spending  freshman year and half of sophomore year at the University of California in Santa Barbara, and then did two quarters at UCLA. After a blind date with a Vietnam vet, she was swept up in a whirlwind romance and dropped out of school completely. Her parents cut off all financial funding, and she moved to Santa Barbara, where she went to work as a trainee for a cancer treatment center doing radiation therapy using a linear accelerator.  “I got very little training and we were on our own treating patients. I quit at the end of a year, overwhelmed by the responsibility and my concern for the patients.” 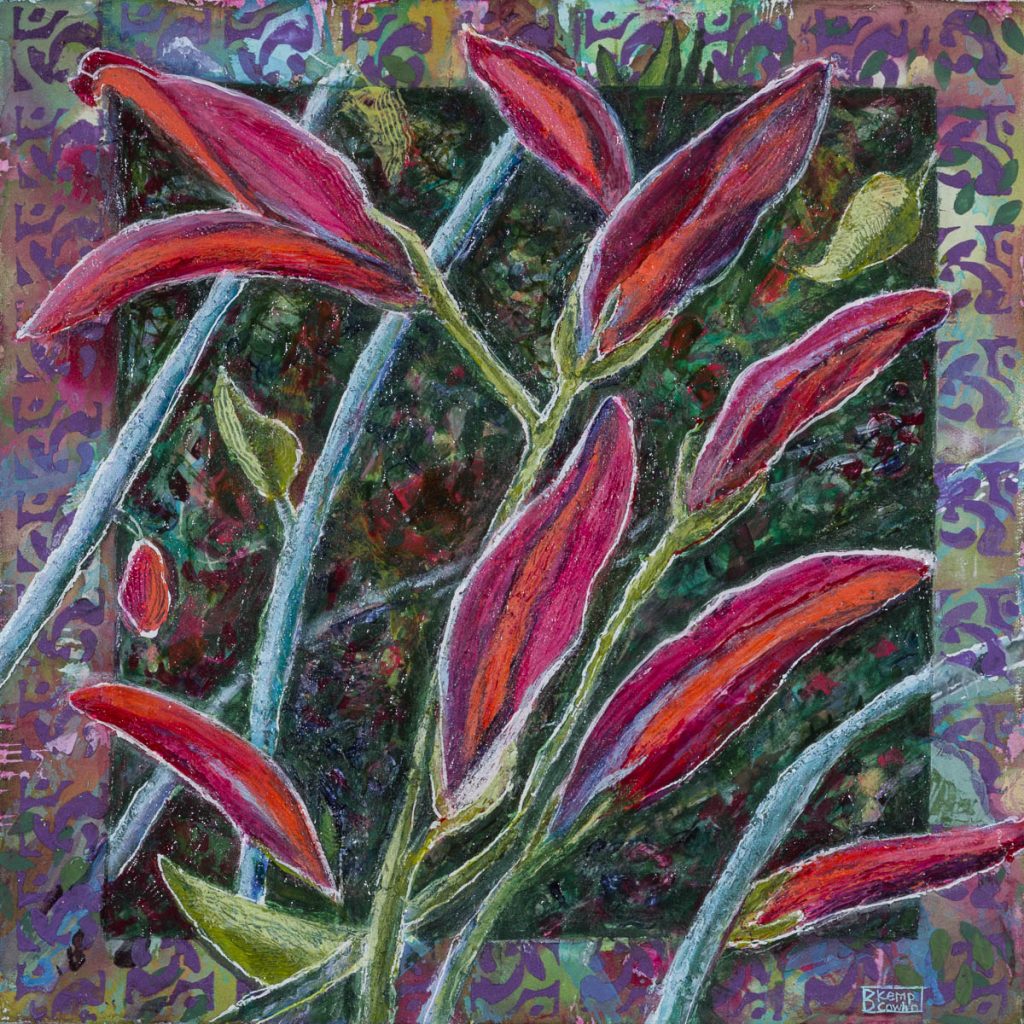 Next for the couple came jobs as caretakers for a wealthy older woman in Montecito, an upscale enclave of Santa Barbara. The gig gave them a place to live and required only 14 hours a week of real work—mostly, doing the laundry and tending rosebushes—so Cowlin started taking art classes at the Santa Barbara City College. 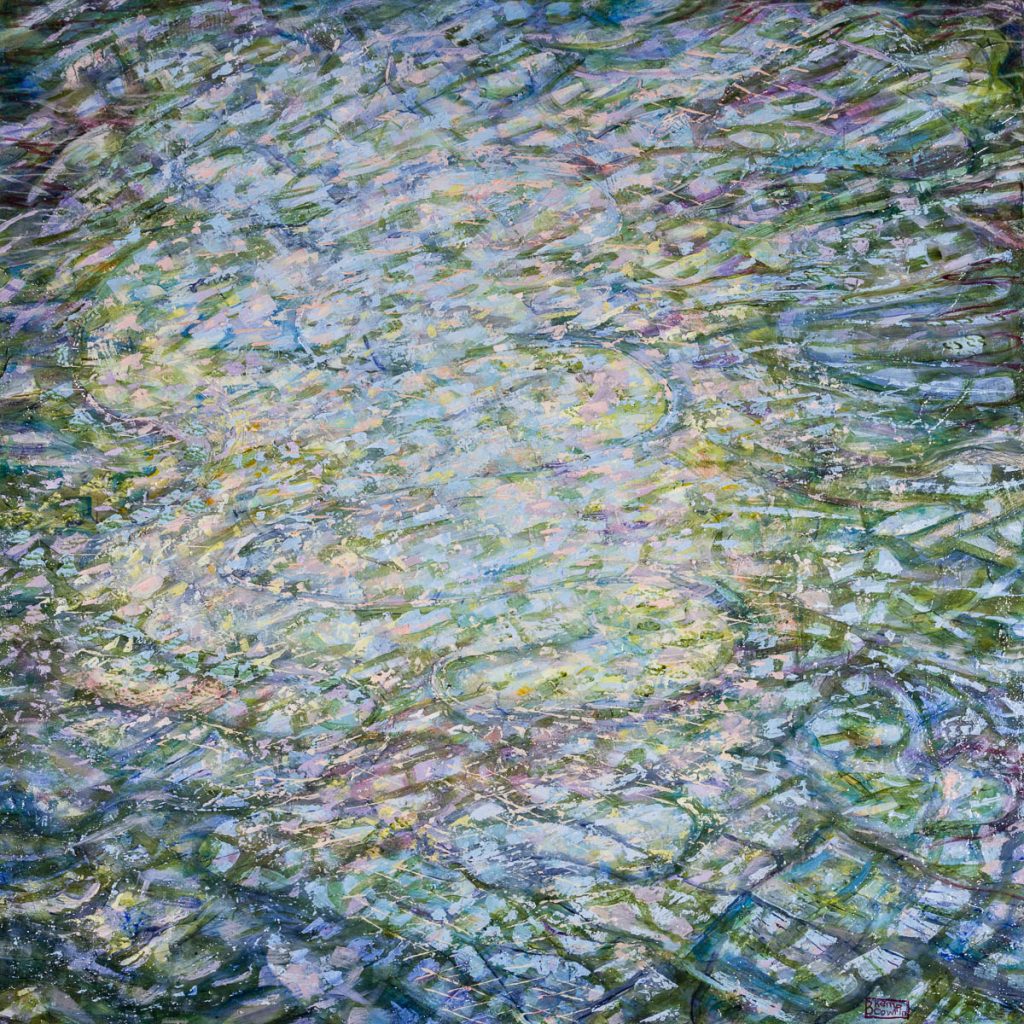 From a young age she’d had a desire to make things and recalls sculpting from clay a “dog lying on her back, with her paws waving in the air” when she was in elementary school. But she never sought out formal training until she was in her early twenties. Her mentor at the college was Robert Frame, a painter who’d spent his career in Southern California, and had, as she puts it, “a small presence on the art scene but was a wonderful teacher.”

When her then-husband decided he wanted to complete his college degree, they moved to Flagstaff to attend Northern Arizona University, because he didn’t want to take a foreign language and the school had no language requirement. For two years Cowlin worked toward a BFA, majoring in printmaking. Then came another search for employment, and because teaching jobs were scarce in the States, the couple ended up going to Australia. “We flew on a jumbo jet with 300 other Americans and the flight was delayed. We were supposed to go to Melbourne for weeklong training in the culture of Australia, but there was too much fog and we landed in Sydney and stayed for a couple of days at the most expensive hotel in town.” 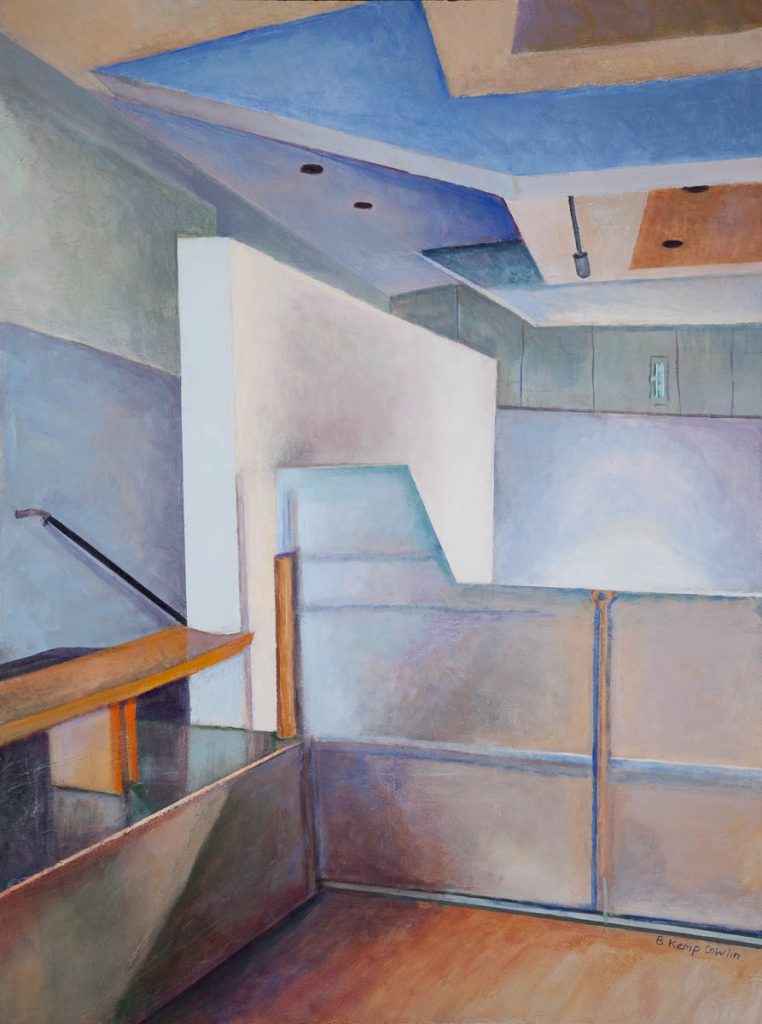 After the brief training period, Cowlin taught art at a private girls’ school and then found work as a library technician, “typing out little catalogue cards.” She considered going for her MFA because the move to Australia had delayed pursuing the degree, but says that “Australia at that time was very backward when it came to women. Women were not even allowed in bars.” When she attempted to apply, she says, “I just got laughed at. Literally.” But she set up a studio and was working on etchings when her then-husband suddenly felt compelled to move back to the U.S.

After a brief stay in Durango, they returned to Flagstaff, and Cowlin started working on a master’s degree in printmaking. “It was not where I wanted to go but the university had a very good printmaking department.” After earning her MA in community college education and six months into a new job as a production manager at a silkscreen printing company in Flagstaff, she learned she was pregnant. From the outset, there had been problems with the boss, and when she developed an intolerance to oil-based inks a few months later, he told her she was fired.

Then, on Thanksgiving morning of that year, when her son Jeremiah was two months old, her husband announced he was leaving her. Cowlin was living in a trailer at the end of a dirt road and subsisting on unemployment, the benefits for which were slated to end in a few months. 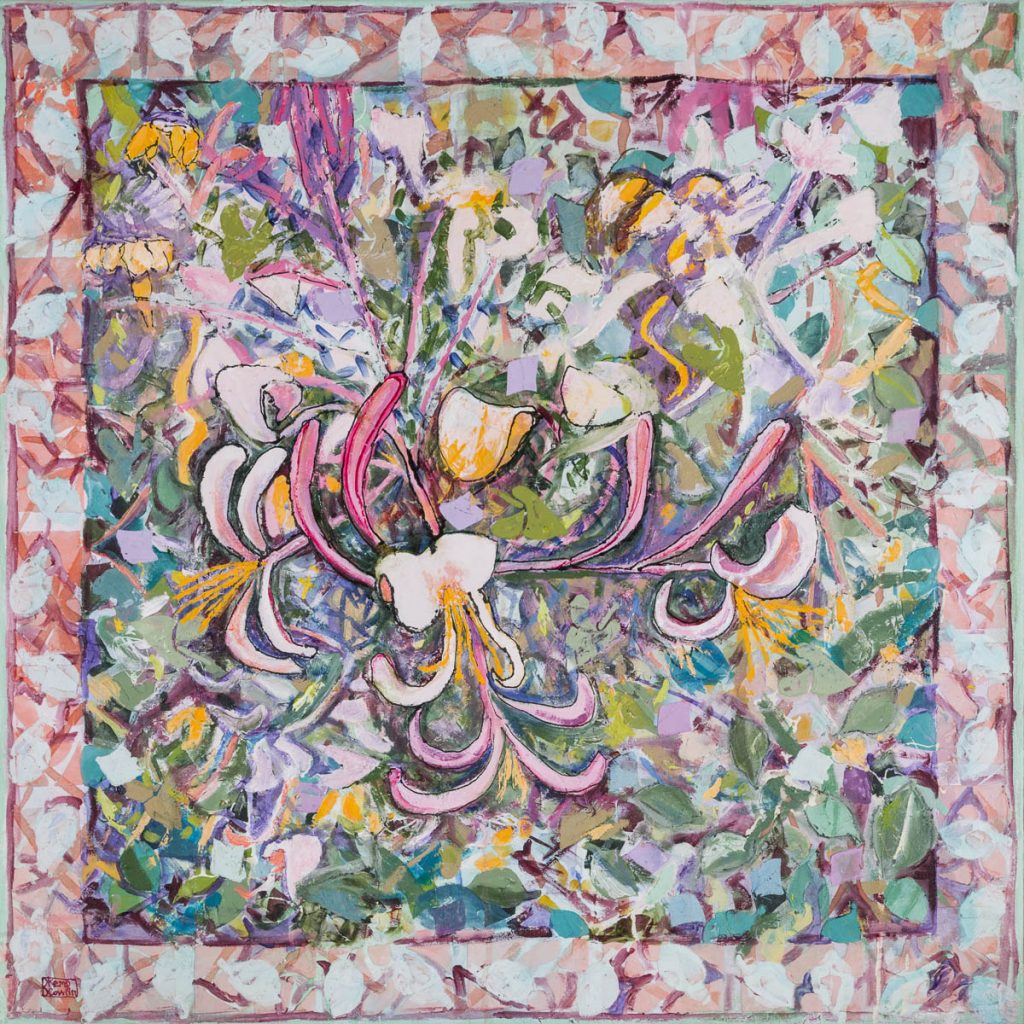 She scrambled to find another a job, taking an assignment with the Census Bureau, and then went to work for Planned Parenthood of Central and Northern Arizona. “I was the education person for two years, which meant I visited the reservations and traveled to other places throughout northern Arizona to talk to women about birth control and reproductive health.”

Finally, in 1981, Cowlin found a post more in line with her talents and experience as the assistant director of the Coconino Center for the Arts. While curating a show of photography for the center, she met Jim Cowlin, an artist from Phoenix. “He asked me to marry him after about three weeks. So Jeremiah and I moved to Phoenix and I ended up working at the Scottsdale Center for the Arts.” When that position required more hours than she was prepared to commit, she joined her new husband in his commercial photography endeavors, doing graphic design for his clients. 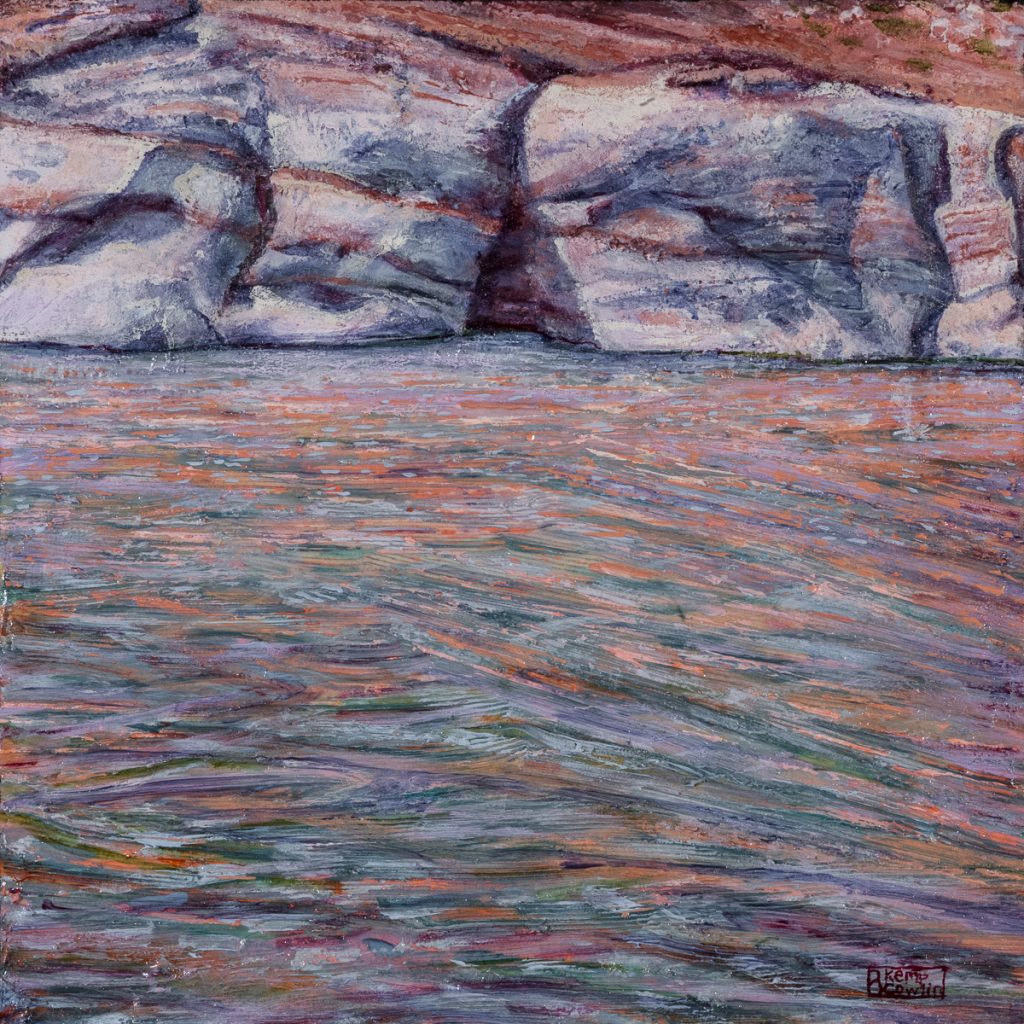 In 1988, six months pregnant with her second child, Cowlin started experiencing complications and delivered a son via emergency C-section. “He weighed two pounds and was not expected to live,” she remembers. “His head was about the size of a tangerine and in his 3.5 months on a respirator he had pneumonia repeatedly. After nearly dying a dozen times, Mathew gradually started to gain weight.” He came home, but when he was 14 months old, the doctors discovered he had cerebral palsy. “For three years I took care of him full time,” she recalls. “And I took on three other babies in home-based day care. I was trying to make art at night and on the weekends,  and when my need to paint over took the need for income, I stopped day care and worked on art full-time for two years. Then came a recession in 1995 and Jim was struggling to find work.” 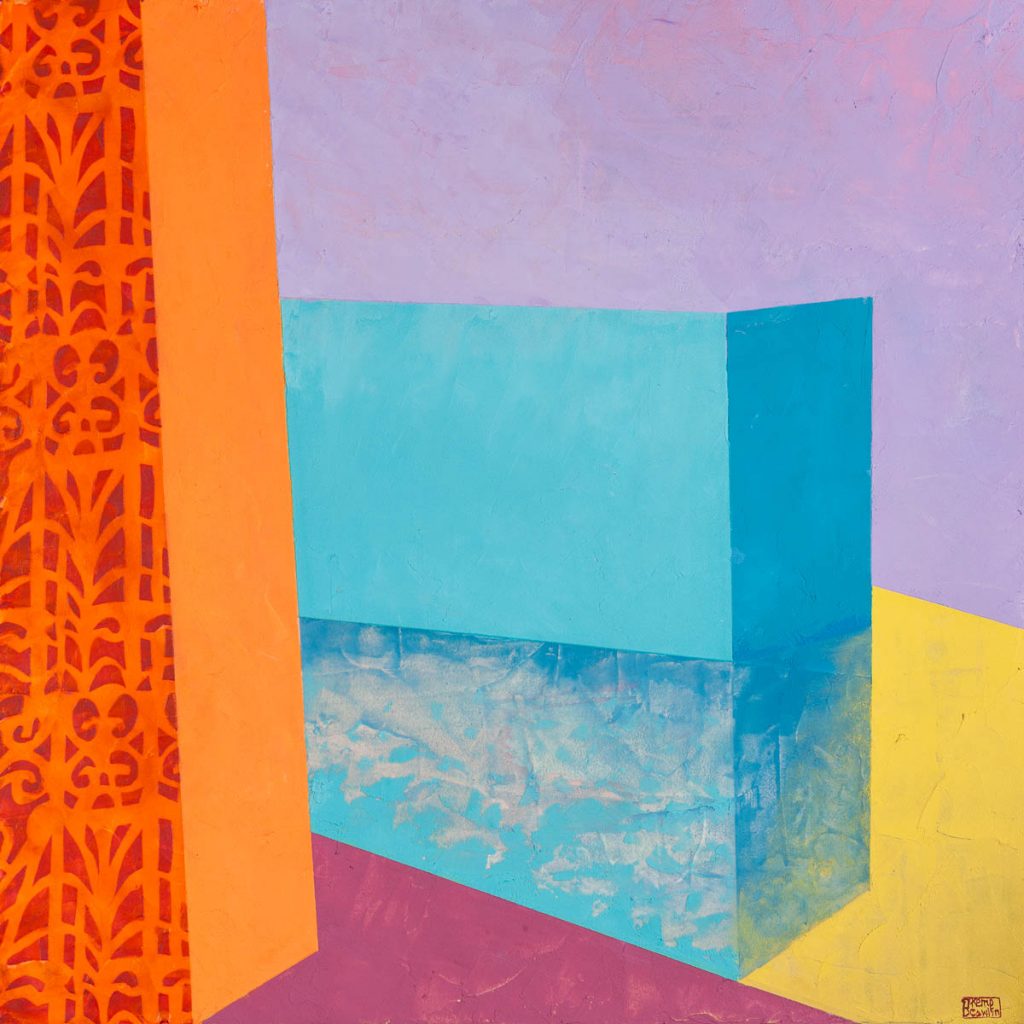 But in spite of all the hardships, Cowlin felt she was making progress, working on landscapes during trips to Southwestern vistas Jim was interested in photographing. Nonetheless, with many jobs behind her and limited employment opportunities around Phoenix, she says she “felt unqualified to do anything.” So at the age of 45 she headed back to school to earn the credentials to become an art teacher. After she gained her certification, she taught in the public elementary school system—“800 students a week, 27 different classes, with a dollar-a-year budget for each kid,” she remembers. “So I was not only teaching but I was scrounging for materials all over Phoenix, getting handouts from different companies.” 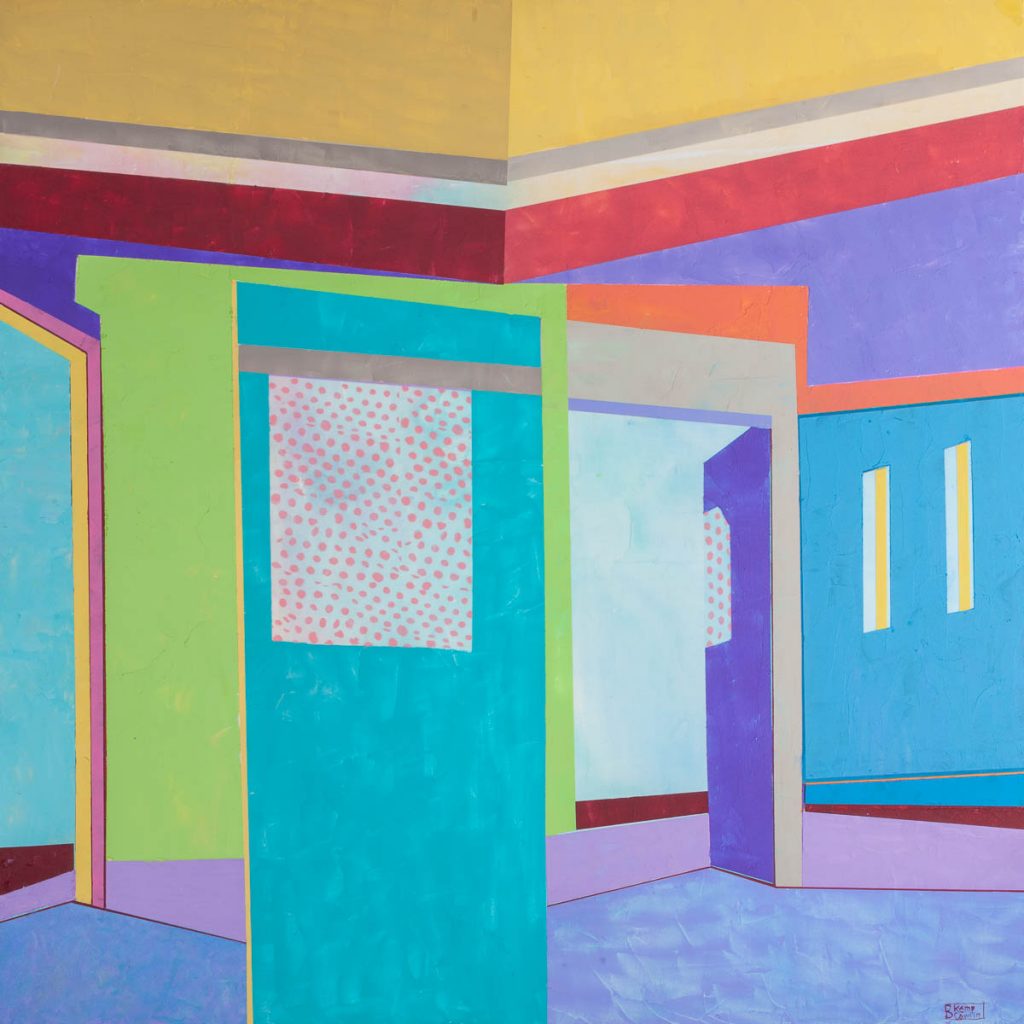 Then she landed a high-end high-school teaching job at Phoenix Country Day School. Though still burdened with a rigorous academic schedule, the school offered much reduced tuition for Mathew. “I was teaching five classes a day, but I still had all these other responsibilities, like class trips, meetings with parents and students to resolve conflicts, advising the school newspaper, and overseeing the art club.” 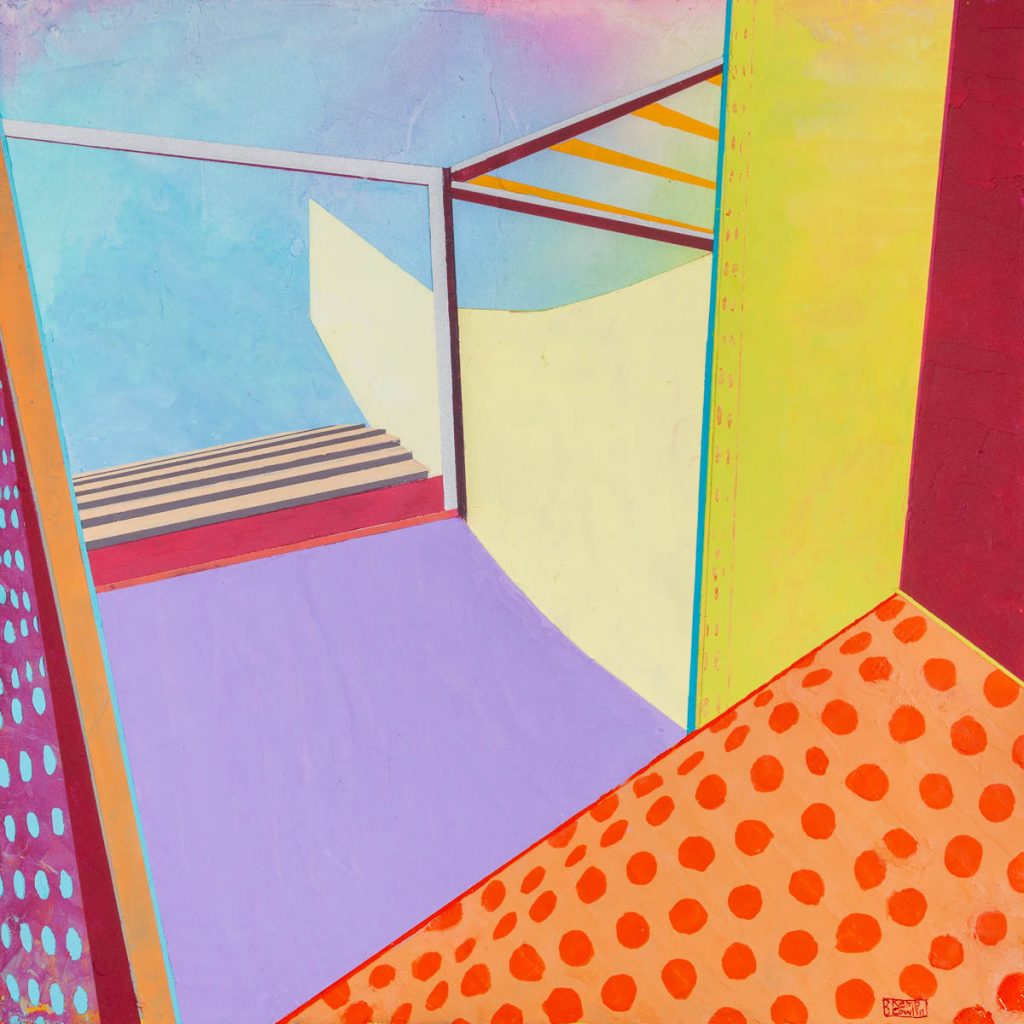 Twelve years ago, the Cowlins settled in Oracle, AZ, another small town, this one an hour from Tucson, where they moved into a house that included a 600-square-foot garage Barbara converted to a studio. Though she still teaches as part of the Golden Artists Program, she’s been able to devote more than a decade to developing a sizable body of work. From landscape, she has moved easily into painting water and flowers. In 2008-09, she developed a series called “Nooks and Crannies,” aspects of architectural interiors inspired by visits to the Phoenix Art Museum.

Most recently, with the help of a grant from the Adolph & Esther Gottlieb Foundation, Cowlin’s work has become ever more resolutely abstract. In her “Askew” series, hints of interiors—staircases, hallways, windows, doors, and ceilings—tease the eye with suggestions of depth even as the surface patterning insists the imagery is really two-dimensional. It’s a kind of push-pull phenomenon, not unlike the one that played a big part in Hans Hofman’s theories in the middle of the last century. 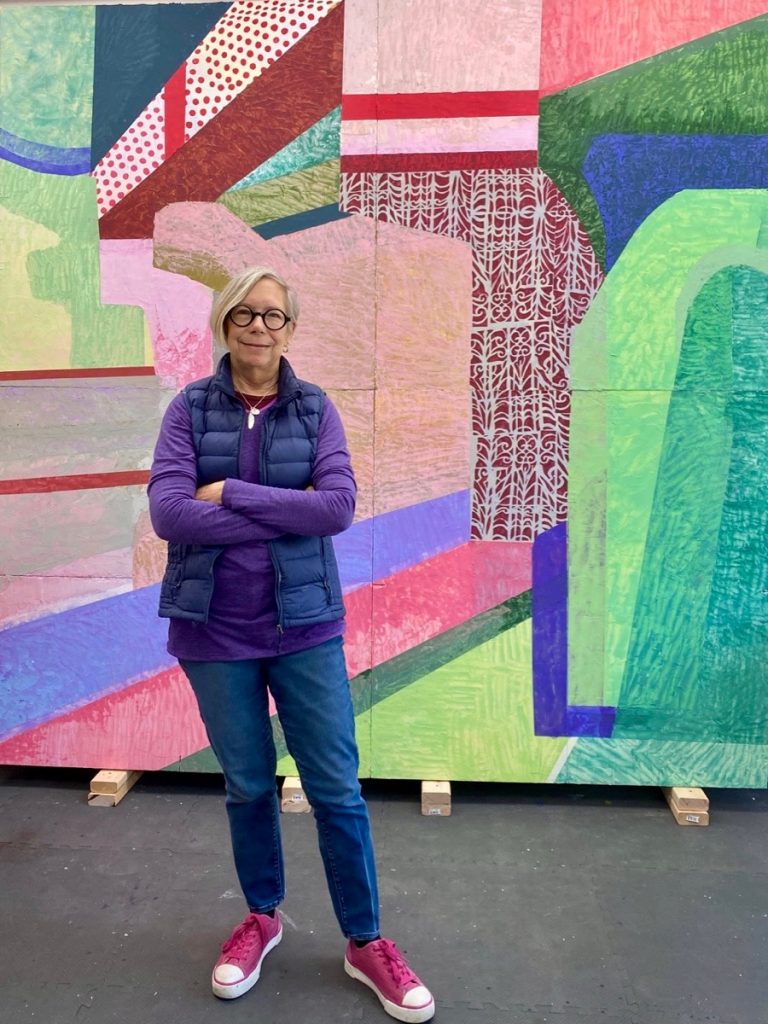 After a lifetime of challenges, personal and professional, Cowlin seems poised to enter a well-deserved period of single-minded concentration on her art. “One of my biggest fears after I finished each degree was that I would head down the path of so many people with training in the arts, drifting off into other occupations and leaving the art world and all that training behind,” she says. “I promised myself I would never fall out of love with being an artist and never quit doing the work—and here I am, all these years later, still sticking to this promise.”

Top: Barbara Kemp Cowlin her her studio in Oracle, AZ. All photography by James Cowlin.