A Visit to “Willa” 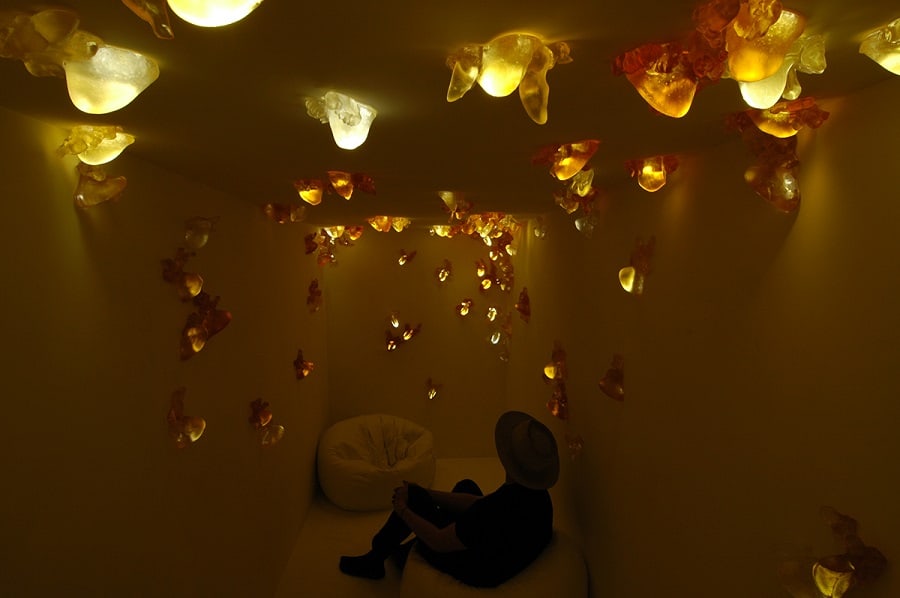 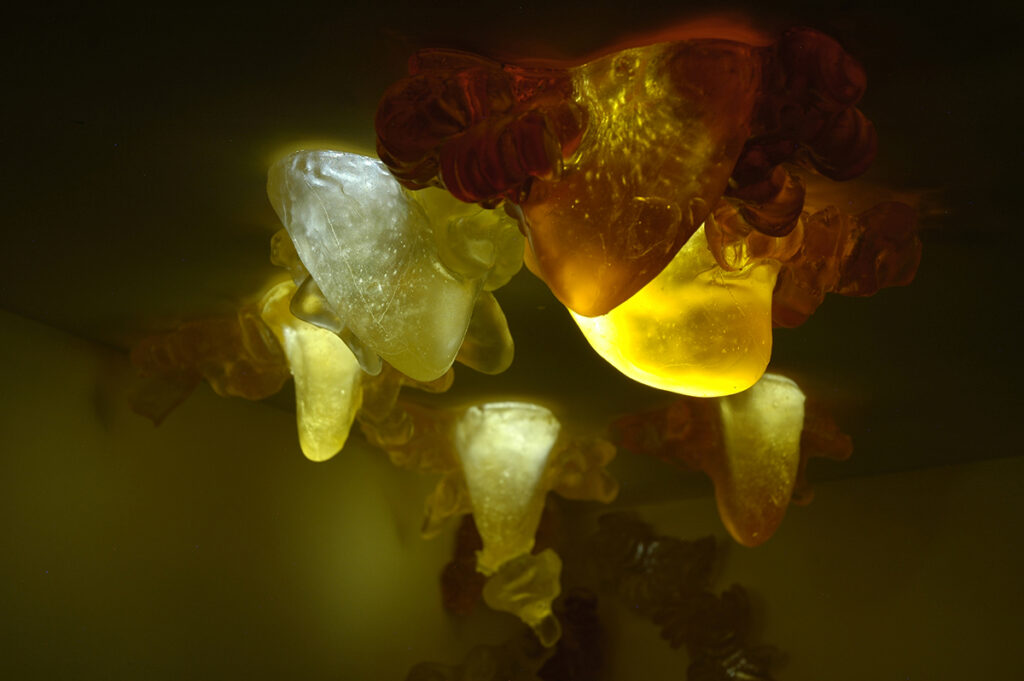 “The glass objects on the walls and ceiling reflect and cast various hues of amber, yellow, blue, green, and purple.”

Several months have passed since my visit to Debbie Long’s studio, but the impression of that evening is clearly etched in my mind’s eye.  Debbie invited me to experience a sunset viewing inside of her sculpture titled Willa (2015-2020).  It’s an installation piece constructed inside of an old RV that measures 26 by 8.5 by 10 feet. The exterior is untouched and looks like any well-traveled RV you might see on the road or parked in an empty lot, innocuous in its aged patina. Inside is a clean rectangular space: walls, floor, ceiling all painted an impeccable white. In certain areas are clusters of handmade cast-glass objects that collect and transmit light from the sky. These amorphous shapes are a conduit from the natural world outside to the interior world created by Debbie. The only other items inside are two bean bags on which to sit, slouch, or lie down. 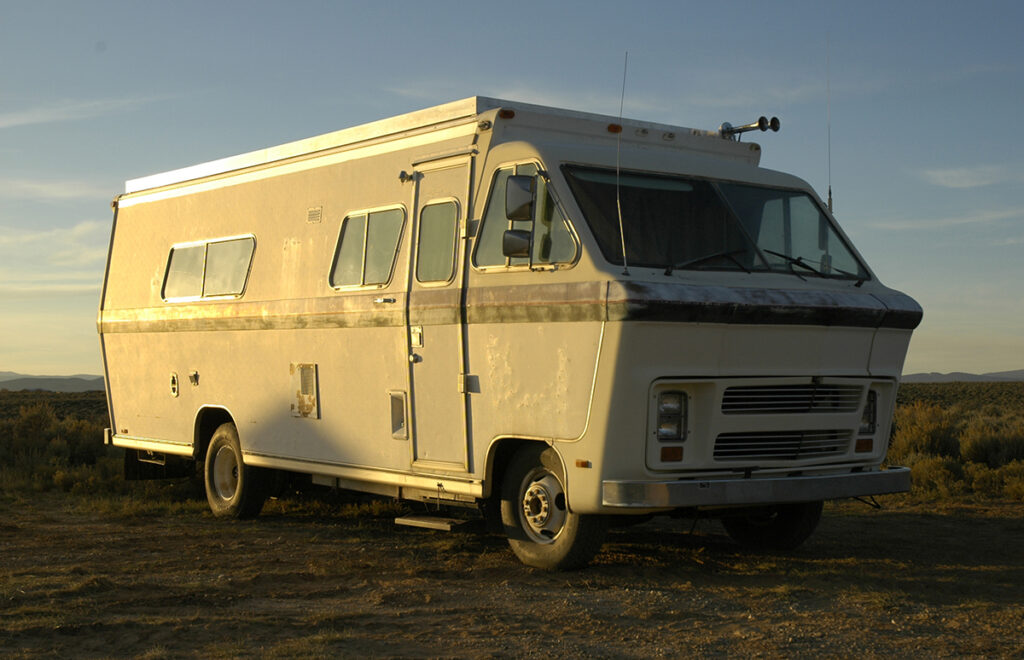 Willa from the outside

Pretty minimal in a sense, but ultimately extremely complex and profound to experience—that is, if you have the time. This piece of art is really only fully appreciated over the span of several hours. I had been in a similar construction of Debbie’s years ago, in Larry Bell’s studio parking lot just across the street from the Harwood Museum of Art in Taos, NM. The title of that piece is Naima Trailer (2012-2015), and it measured 18 by 7.5 by 9 feet. I stood in line with many others, waiting my turn to enter. Once inside, trying to take in as much as I could before my conscience reminded me of all the others hoping to enter, I left after three minutes. Much like walking around the Louvre or the Met, you get a certain hit from a piece that you stand in front of for a few minutes…but to spend three hours with a single work of art in complete isolation, cut off from all distractions, is another story. 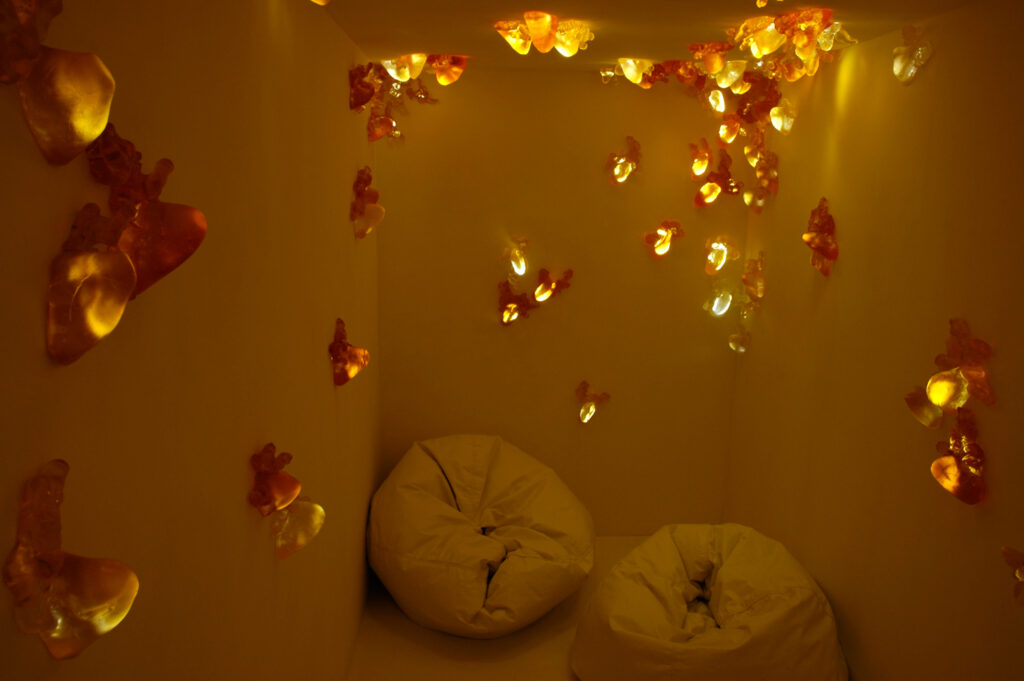 “Three hours alternately sitting or lying down on the white bean-bag pouf, watching the subtlest of changes as the sun began its final descent….”

That’s what I had with Willa.  Debbie and I entered around 7 p.m. and re-emerged about 10 p.m.  Three hours alternately sitting or lying down on the white bean-bag pouf, watching the subtlest of changes as the sun began its final descent into the horizon. The glass objects, which are situated on the walls and ceiling, reflect and cast various hues of amber, yellow, blue, green, and purple. All of this happening on an ever-changing background as the white walls and ceiling started shifting in accordance with the diminishing light. Still, I noticed the shape of the “box” we were sitting in, and I was physically aware of the floor. I would switch my attention from as much as I could take in with my peripheral vision to focusing intensely on one object.  I kept wanting to see something in these glass shapes as sometimes happens when looking at cloud—you may see a rabbit or a fish, for instance—but I was never able to make any such associations with Debbie’s work. 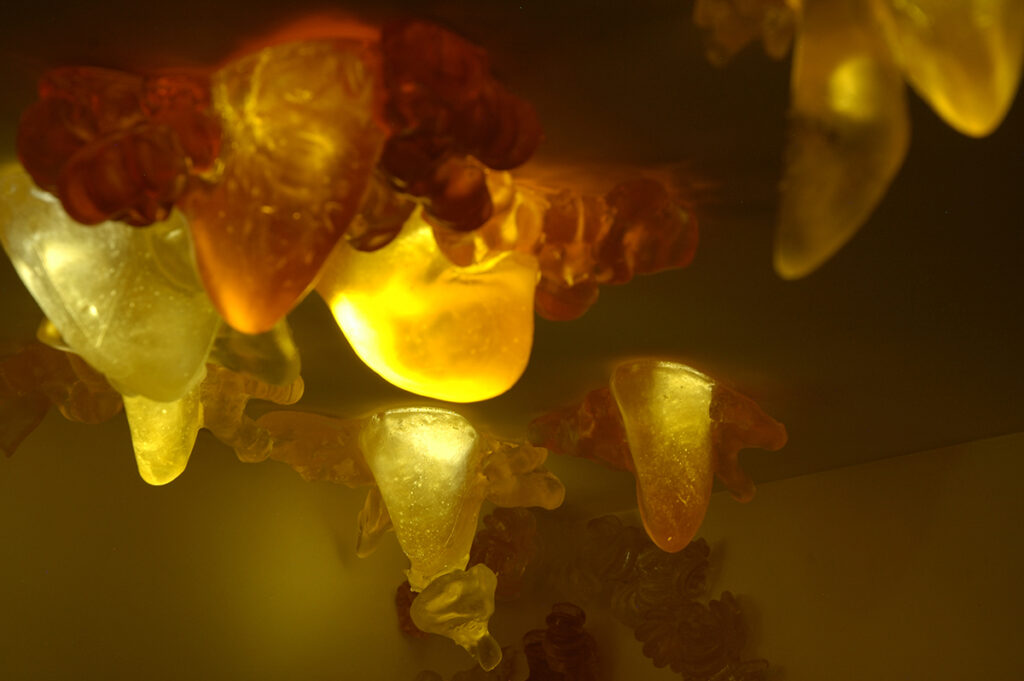 “I was trying to ground myself, because the fact was that I was being taken into a foreign place.”

I realized on some level I was trying to ground myself, because the fact was that I was being taken into a foreign place, no longer looking at an art installation, but being immersed in it.  The amount of light entering the space was dropping off, but the works of glass still illuminated the space enough for our acclimated eyes to see the walls and floor. Then I looked up again and realized the ceiling was gone!  I checked again from the floor up to the walls and the ceiling was not there anymore. It was as if the lid of the trailer had been removed but the glass objects were still there, floating in space. And without a ceiling to ground them, they started to move!  I realize I’ve just used two exclamation points in so many sentences, but this was trippy…. I’ve been clean and sober for 37 years and I’m now looking up at floating glass shapes in a pitch-black space that begins where the walls end. There was a crisp black rectangle opening where the ceiling had been. It reminded me of a James Turrell’s “Sky Room,” except there was no physical hole in Debbie’s piece.  This is where words fall short in describing the scene.  Had I written about this piece the next day, I would have missed the lasting effects I’m feeling now of the time spent in Willa. I have shared my experience with several people and never quite feel like I got it right as I have that feeling again right now. Debbie shared that the ideal way to experience this work of art is to spend the time needed, whether it’s during a sunrise, sunset, or some significant part of the day; you need to allow the tracking of the sun or moon to shape your understanding.  It was a singular experience that has made me look at life and art in a much slower manner so as not to miss the subtle gems.

Paul O’Connor was profiled for the site in 2019. Like Debbie Long, he lives in Taos, NM.