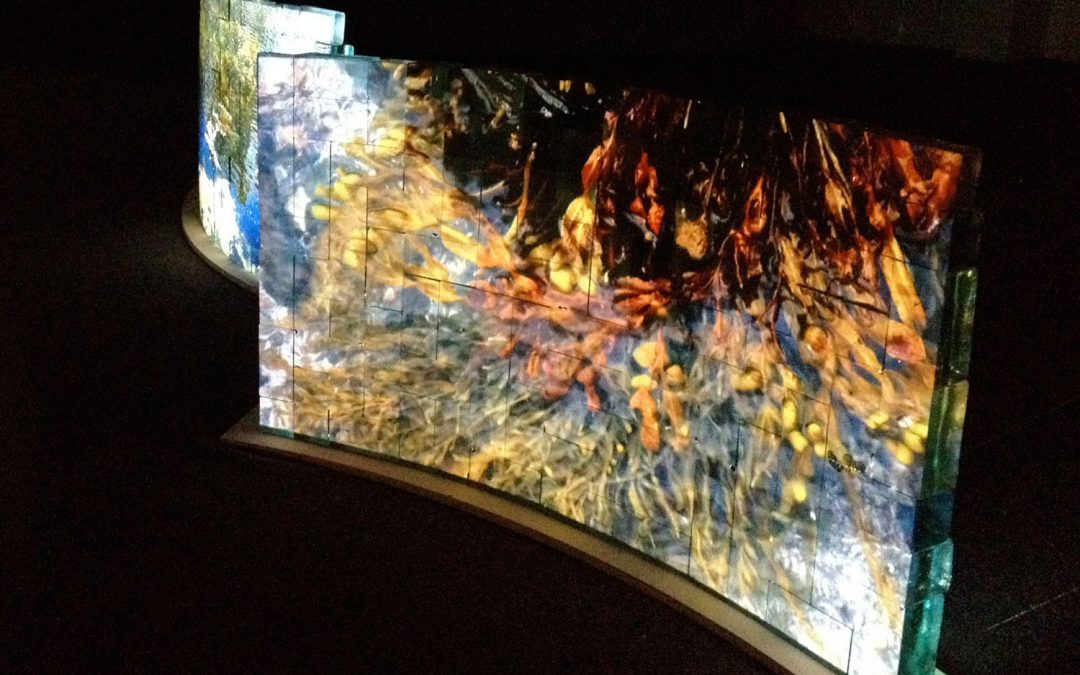 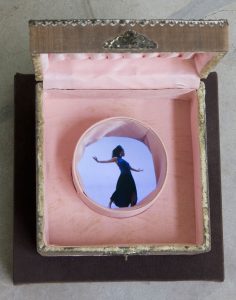 One of my all-time favorite video works is housed in an elegant little box, lined in pink satin and measuring only about seven by eight by eight inches deep. Inside, like an animated tondo, is a round screen showing dancer-choreographer Rulan Tangen performing a fiercely sensuous solo against what looks to be a clear blue sky. The piece is called Collars and Cuffs because that’s what the box was intended to store—a Victorian gentleman’s indispensable accoutrements for proper dress.

We tend to associate video art with big overblown productions viewed inside darkened rooms in galleries and museums or projected on to the surfaces of buildings, but the authors of this one, Susanna Carlisle and Bruce Hamilton, have found ways to combine mesmerizing images with an intimate “frame”—often a sculptural object but sometimes a vessel as homely as a glass jar. 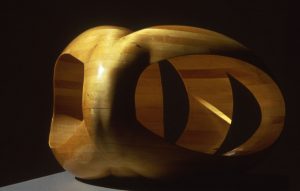 A married couple, Carlisle and Hamilton (who also happen to be the parents of Jamie Hamilton, profiled for Vasari21 about a year ago). have been working together almost from the time they met in Philadelphia, more than 40 years ago. On their first couple of dates they went to the Frick Collection in New York and the Barnes Foundation in Merion, PA. “We had this amazing common sensibility,” recalls Susanna. “We could give each other insights into different things.”

At the time she met her future husband, Carlisle was working on minimum-volume structures that had been part of her thesis project at the University of Pennsylvania’s school of architecture. These were collapsible modular building systems made from different geometries that interlocked to create a climbing structure for children. And they were sufficiently sophisticated that the city of Philadelphia commissioned her, along with Hamilton, to make “play environments” in time for the Bicentennial in 1976. They were also lucrative enough for the Carlisle-Hamiltons to move west and begin building a home together, designed, of course, by Susanna. 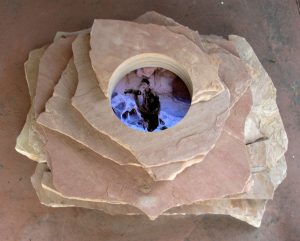 The couple had discovered the Santa Fe area on a trip to the Southwest, and bought property in Glorieta, a tiny community a few miles south of Santa Fe. In 1977 they went to work on a house shaped like a classic dome but built from adobe, with an upper floor suspended from cables. They built a small wooden structure, based on a nautilus shape, to live in while constructing the main house, starting with the kitchen and expanding from there. “When Jamie was born, we put him in a wheelbarrow with a parasol attached to it so he could be outside with us while we were doing construction,” says Carlisle.

For about ten years, Carlisle and Hamilton were part of an artists-in-residence program, funded by the National Endowment for the Arts, which sent artists into different communities to help with projects that could make use of their talents. In Springer, NM, for example, Carlisle designed a visitors’ pavilion. “We would get $17.50 an hour,” she recalls, “which was a lot of money in those days.” 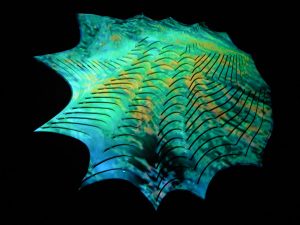 In the mid-1980s, when personal computers were still in their infancy, the couple turned their energies to designing sculpture (Bruce had developed a facility for writing software programs). From initial plans conceived on the computer, they built elegant sculptures from acrylic, brass, cable, and wood (such as Tetrad, made from laminated wood, and shown here).

During their tenure as New Mexico artists in residence, Carlisle and Hamilton met Woody and Steina Vasulka, two pioneers of video art who founded The Kitchen in New York, then as now a place where innovative new-media artists could present their works. “Steina met Bruce at a time when the Vasulkas were  moving from analog video to exploring the possibilities of digital,” says Carlisle. “They had never done digital media at all. Steina saw that Bruce had an amazing facility for digital, so she asked him to work with her and Woody, to help them realize their installations.”  For a big show in Japan in the late 1990s, Carlisle helped the Vasulkas design architectural spaces and sculptural elements, while Bruce did much of the programming. 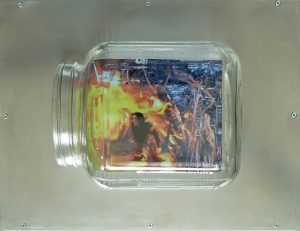 Through the Vasulkas, says Carlisle, “We fell down the rabbit hole into video. I loved manipulating images.” For her birthday, Hamilton bought her a small portable camera, and Susanna, who had long been interested in dance, began making videos that incorporated original choreography and local dancers. “At first these are about the internal environment of the body, how that responds to what’s happening around us,” says Susanna. “Then we got very concerned about climate change, and interested in the Native American sensibility that is so much a part of our lives here. Ultimately, the videos became about how we can live in harmony—or maybe not in total harmony, but in such a way that we don’t destroy our planet.”

The numerous projects that Hamilton and Carlisle have produced since about 2001 tackle the themes of our vanishing water supply, forest fires, a riot at the New Mexico state penitentiary, and “what it means to be a woman on the fringes of society.” Some have been inspired by the lives of other artists, such as Eva Hesse and Egon Schiele, and many feature sculptural “frames” or bases—like a nest of sandstone or a birch-wood screen shaped like a fossil from the Jurassic era. 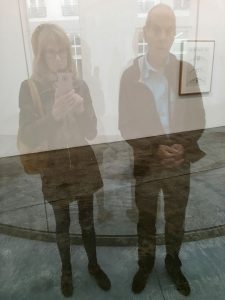 For their installation “Seawall” (2012), the couple collected glass bottles from the dump. Working with the New Mexico Experimental Glass Workshop, they shattered the glass in a 55-gallon drum and then melted it to forge bricks that form a wall against which a video is projected. The projections include one of seaweed filmed along the coast of Maine and another of water on the surface of a natural spring in high-desert country. As their website notes, “The glass gives the images a very three-dimensional presence—like looking into water.”

Asked about what difficulties can arise from collaborations, especially between a married couple, Bruce says, “Susanna does all the video work. She makes the films and does the processing. If she runs into a problem, I’ll help her. And then we decide how we’re going to show it.” Says Susanna, “We try to be very flexible and open about what we’re doing.” Any arguments? “Once, long ago, while building the house, I got so mad at him, I hit him, not hard, but then he hit me back. And then we both collapsed because we were laughing so hard. I think that was the only time we’ve ever gotten furious with each other.”