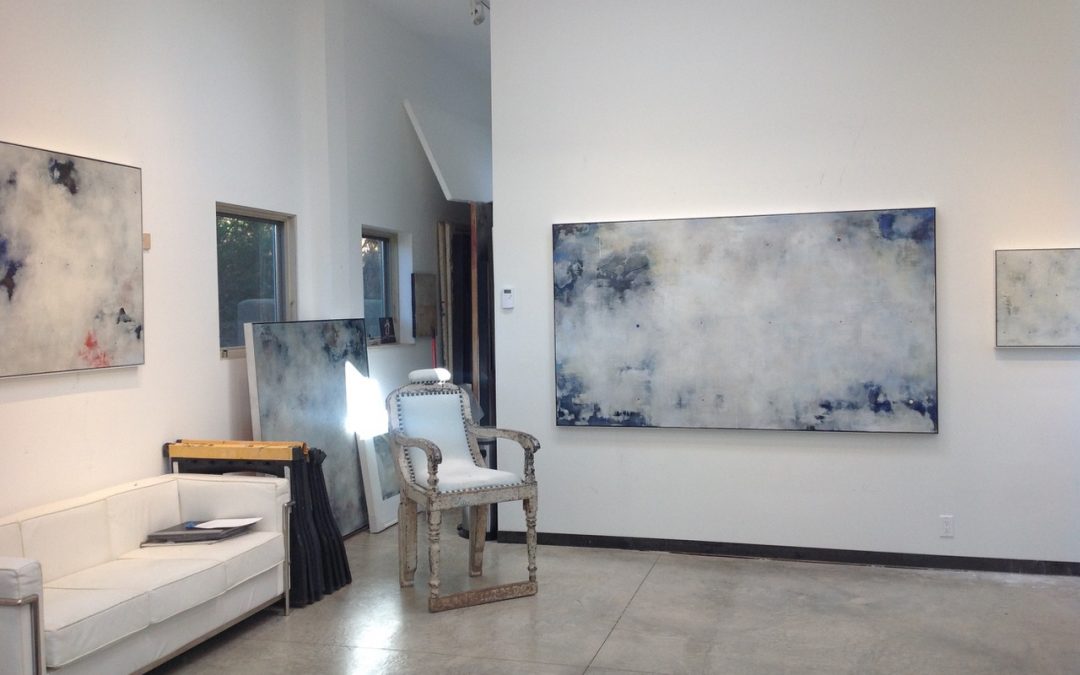 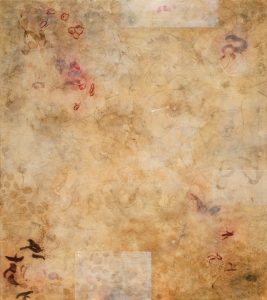 As a child in Belgium, Raphaëlle Goethals had the good fortune to be exposed to the great museums of Europe and to the Late Gothic and Northern Renaissance masterworks in her native city of Brussels. “My mom would take us all over the place and whether you like it or not, you grow up with the whole Flemish thing,” she says. At first blush, her airy, large, and luminous abstractions might not seem to have much in common with minutely detailed and highly polished work of artists like Jan van Eyck and Rogier van der Weyden. Yet now, more than four decades later, she can see a “connecting path from the early devotional Flemish paintings to the point zero of Minimalism and rebuilding from there.” 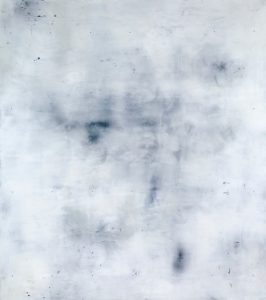 At the age of 23, armed with a degree in graphic arts from the Atelier 75 in Brussels, Goethals headed for Los Angeles. New York might have seemed the logical destination for a young woman eager to stretch her wings, but she had friends in L.A., and New York, she believed, would have been too similar to European cities. On the West Coast she found the steady work as a commercial illustrator that would ensure her a green card and support her painting on the side. Though she wasn’t part of the what came to be known as the Light and Space Movement, whose avatars like Larry Bell and Robert Irwin were a couple of decades her senior, she credits their fascination with light and materials for some of the foregrounding of her own practice.

Soon after arriving in L.A., Goethals went back to school to acquire a degree from the Otis Art Institute. “Cal Arts at the time was all conceptual, and the ArtCenter all technical, while Otis was the offshoot of Chouinard, and a perfect fit,” she says, referring to the school that was later absorbed into Cal Arts and produced alumni as diverse as Ed Ruscha and costume designer Bob Maacke. Her paintings from the ‘80s, she adds, were “large, fearless, emotional, still figurative,” and her time in Los Angeles was “one of learning, seeing, and adapting to a new language and culture.” 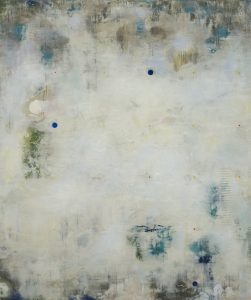 It wasn’t until she moved to Santa Fe in the early ‘90s with her first husband, a chemist who worked in nearby Los Alamos, that Goethals came into her own as an artist, developing what critics like to call a “signature style.” And a large part of what determines her work’s radiance and mystery lies in her process. The artist started working in encaustic before the medium became as widespread as it is now, and in her studio she takes me through some of the steps that lead to the finished work. She begins with large birch panels—“often in the color red, the color of our insides because I work from the inside out, from flesh to spirit,” she explains. “Then I need to obliterate it, unifying with whites.”  She spreads layers of encaustic—in her case, a mix of damar resin and beeswax—and mixes pigment into the wax or applies it directly, grinding color into the surface, and adding further visual information through incisions and other marks. Layer upon layer is abraded, scraped, scratched, and effaced. “In this process of building up, a certain amount of information gets laid down on each layer and then obscured, as some areas remain transparent while others turn opaque,” as Arden Reed noted in a catalogue essay for one of her shows. 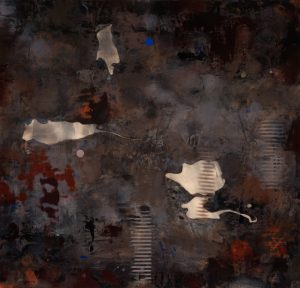 The urge to explore the possibilities of encaustic started even before she relocated to the Southwest. “I was always interested in materials, and was experimenting with marble dust, salt, and other stuff,” she says. She also credits Wolfgang Laib, a German conceptual artist who works in both perishable and durable materials (beeswax and rice are among his mediums) as a model and influence. A painter friend named Wess Dahlberg give her a large block of beeswax in Los Angeles. “It sat in my studio for a long time and made the trip with me to New Mexico,” she explains. “I discovered an immediate affinity for the medium. It offers a very physical, sensual, meditative way of working, from liquid to solid.”

In many of her works, particularly the “Lumens” series from 1998-2003, there appear hints of signs and symbols, evocative notations that resemble hieroglyphs, scribbles, or primitive shapes from an earlier culture. Critics have credited an interest in language as their origin, and Goethals herself says, “Remember I was raised in Belgium and partially school in France, where the word is it. Think of the French theorists, the birth of language, Foucault, Kristeva, and others.” There are also remnants of a gridlike structuring in many of the paintings; it hovers like a ghostly shadow just below the surface; in recent works, colored dots in regular arrangements, act like anchors, reminders that the suggestive layers beneath are all illusion. 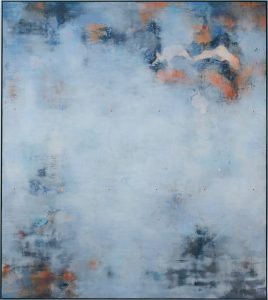 “I actually think that the level of emotional resonance I aim for can only be achieved once narrative and imagery are out of the way,” she says. “True, some poured shapes appear in my work, but there are no direct references—it’s just painting as a way of thinking.”

As her most recent body of work developed, Goethals realized that at some deep level she was referencing three of the four basic elements: Earth (in the “Lumens” series), Air (in her “Mnemosyne” and “Dust Stories” series), and most recently Water. 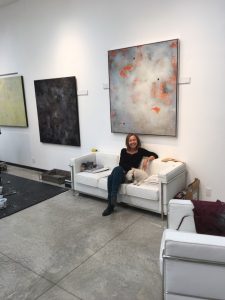 Raphaelle Goethals and Louie in the studio

Subtlety and a strong meditative aspect have remained constants, however. “I am not interested in heroic gestures and bold statements,” she says, “but I believe in adding to the profound possibilities of abstraction.”