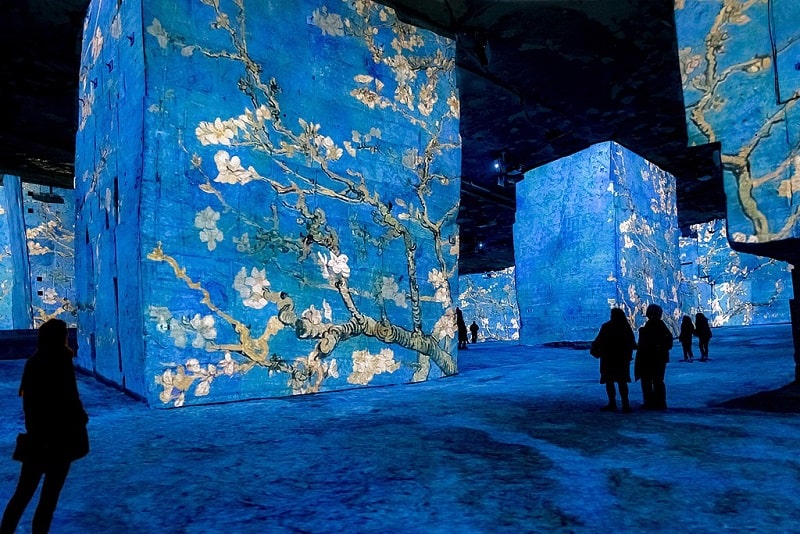 Show Biz with an Art Pedigree?

On my last real vacation, about 12 years ago, I took a seven-day riverboat cruise along the Seine with eight other passengers aboard a boat intended for 42. It was one of the best trips ever, both for the company, a surprisingly agreeable group of complete strangers, and for the unusual sights along our route. Docking in Rouen one night, we gawked and gasped at a sensational light show as Monet’s paintings of the cathedral flashed in pixelated brilliance on the exterior of the church, the master’s visions at all times of day flowing gorgeously one into another.

I’m not sure I would have described the experience as “immersive,” but in its computer-generated awesomeness, it was certainly a harbinger of art-world spectacles to come. 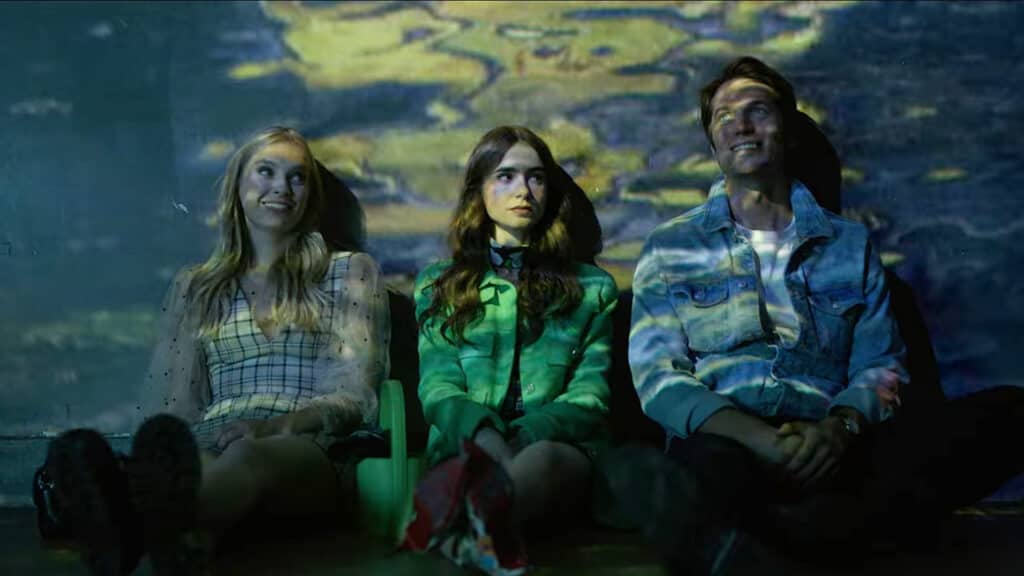 Emily and friends get immersed in Starry Night

If you’ve been following the art press this past year, yearning to see what’s opening in our pandemic-restricted times, you may have read references to something called “Immersive van Gogh.” If you got pulled into binge-watching the extremely sappy but cute-as-a-puppy Netflix series called “Emily in Paris,” you could even sample a bit of the show’s iteration in the City of Light, as Emily and her cute-as-a-puppy male companion visit the show at the Atelier des Lumières and find themselves bathed in projections of the unhappy genius’s cornfields, rivers, irises, and, of course, starry nights (a clip is here).

Then I began reading about more and more immersive van Gogh shows all over the world and in this country, in particular, opening in places as diverse as San Francisco, Chicago, St, Petersburg, Nashville, and even the Newfields Museum of Art in Indianapolis (set to debut this summer). As described in Artnet News in October of last year, the show, called The Lume, “will feature nearly 30,000 square feet of new immersive digital art galleries that will permanently occupy the fourth floor of the Indianapolis museum’s galleries. It involves approximately 150 state-of-the-art high-definition projectors that will splash nearly 3,000 moving images of Van Gogh painting across the walls, ceilings, and floors of the gallery.” Phew! That’s a lot of Vincent.

Now, to art-savvy connoisseurs, the whole idea of immersive art is not particularly new. Consider Yayoi Kusama’s “Infinity Mirror Rooms,” which have been in production since 1965. Six of these were presented at the Hirshhorn Museum in 2017 and described by the museum’s website thusly: “Ranging from peep-show-like chambers to multimedia installations, each of Kusama’s kaleidoscopic environments offers the chance to step into an illusion of infinite space. The rooms also provide an opportunity to examine the artist’s central themes, such as the celebration of life and its aftermath.” 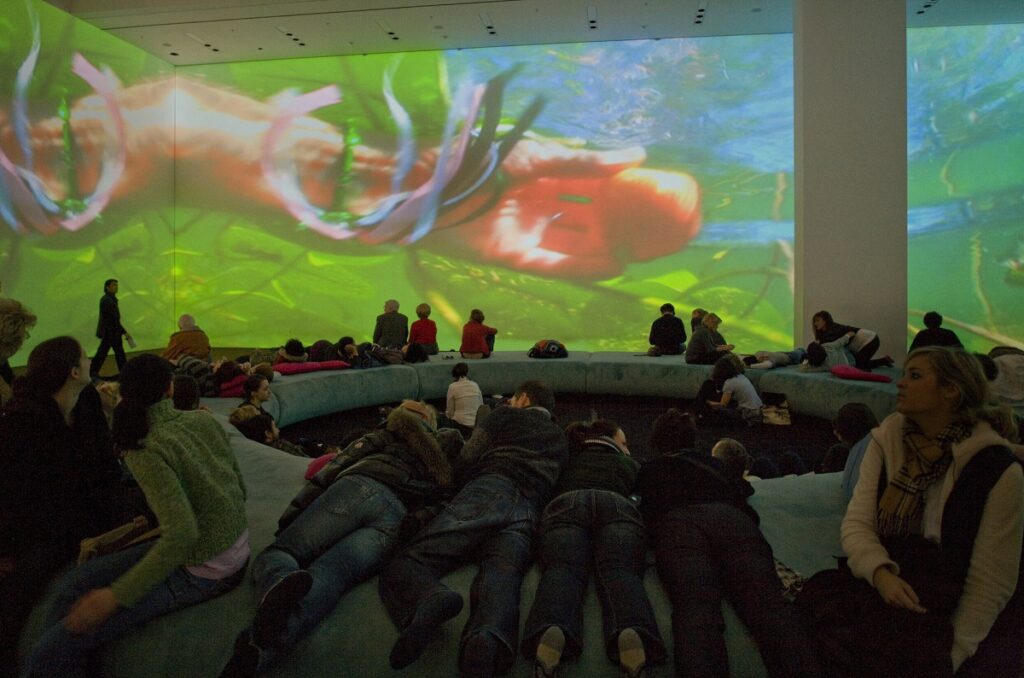 Other shows that undoubtedly count as immersive include AA Bronson’s Garten der Lüste at the KW Institute of Contemporary Art in Berlin, visited by writer Kate Brown from the web publication Artnet in 2018: “I crawled behind the curtained opening of a little tent where I met the artist and his collaborator sitting in robes or nude on plush pillows,” she wrote. ”We shook hands and shared tea for 15 minutes in the Tent of Healing before I handed over a totem I had brought with me and stepped back into the gallery. I didn’t flinch at the intimacy of the experience.”

And there have been any number of immersive installations from the cheeky Swiss video star Pipilotti Rist (one I recall from a press preview at MoMA years ago featured snorting pigs racing around the walls of the open second-floor gallery as visitors lounged on comfy floor cushions). And don’t at least two of the masterworks of Land Art count as immersive? Namely, James Turrell’s Roden Crater and Walter De Maria’s Lightning Field? 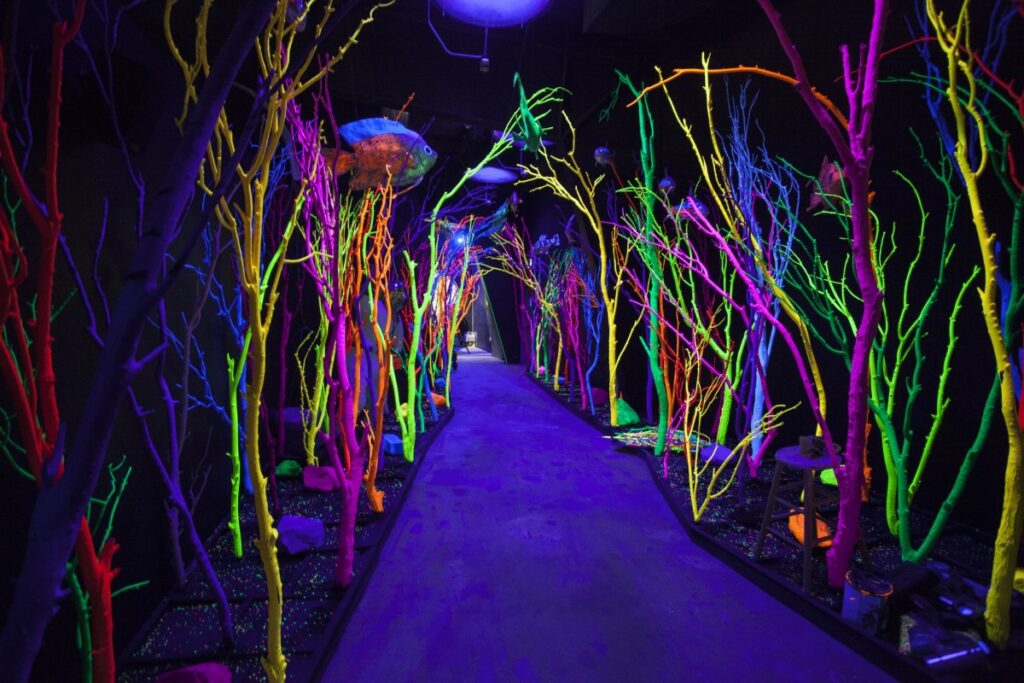 On a more populist front, Meow Wolf in Santa Fe has been offering its psychedelic “House of Eternal Return,” billed as “more than 70 rooms of interactive art [that] takes participants on a macrocosmic adventure of seemingly endless possibilities.” When I visited after it first opened in 2015, my impression was of a bunch of MFA students using any means at their disposal to illustrate a script rejected by “The Twilight Zone.” But it was a roaring success, and even though Covid-19 ruled out visitors and laid off some 200 employees, the company is barreling ahead with a $158 million investment, expanding its footprint with new locations in Phoenix, Washington DC, Denver, and Las Vegas.

There have also been “immersive” shows dedicated to Salvador Dalí, Picasso, and the terra cotta army of the First Emperor of China. Some of these, especially the shows dedicated to van Gogh, include music (Don McLean’s “Vincent,” of course, but also period pieces by Ravel, Debussy, and Satie) and “aromas of cypress, cedar, sandalwood and nutmeg with hints of lemon and vetiver to transport people to orchards, gardens and fields,” reports The New York Times. The producer of one such extravaganza says part of the intention is to “go into van Gogh’s mind to show us what flashed before his eyes before he passed away.” 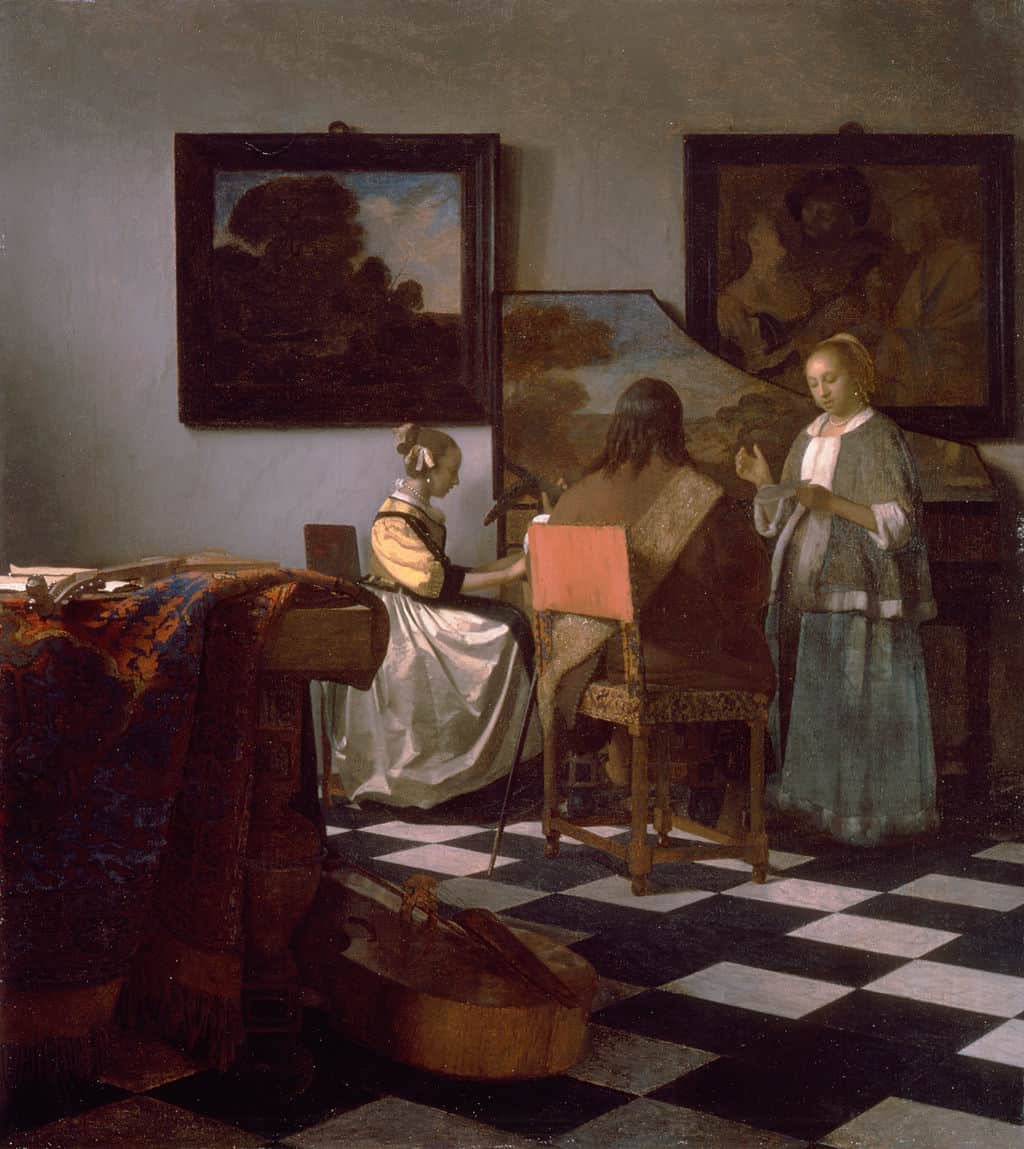 Whatever the subject, whoever the artist, the trend is toward ever more special effects As Brown pointed out in 2018, “Throughout the last decade, museums and galleries have been leaning into such experiential programming, and viewers have become conditioned to expect them. Touching artworks, putting on headsets, lounging on furniture—anything beyond simply standing and looking has become a staple of museum programming.” It’s all in the name of “softening the white cube.”

All of these spectacles raise the question: What is an experience of a work of art supposed to be about? I am of the generation that was first introduced to masterpieces in galleries and museums and taught to quietly commune one on one and from an appropriate distance. Of course, things got a little crazier as time went on, blockbusters pulled in the crowds, and selfies rather than aesthetic uplift became the goal.

Not many critics have yet weighed in on immersive van Gogh, and most I know don’t seem in any hurry to book a ticket at a price of up to $65 a head. Tony Bravo, an arts and culture reporter for The San Francisco Chronicle, calls it “show business with an art pedigree” and claims that “the experience’s intensity may be the jolt we collectively need coming out of our forced hibernation.” Really?

I find myself far more envious of a night security guard at the Isabella Stewart Gardner Museum in Boston, who spent long hours with Vermeer’s painting The Concert before it was stolen in 1990. “That was one of my favorite pieces to study,” she told the filmmakers of the recent Netflix documentary This Is a Robbery. “To just be there. It was almost like you could talk to it.” She was nearly in tears. I could relate. It seems to me a far greater privilege to commune privately with Vermeer’s quiet harmonies than to be strafed by Vincent’s irises, no matter how nice they smell.