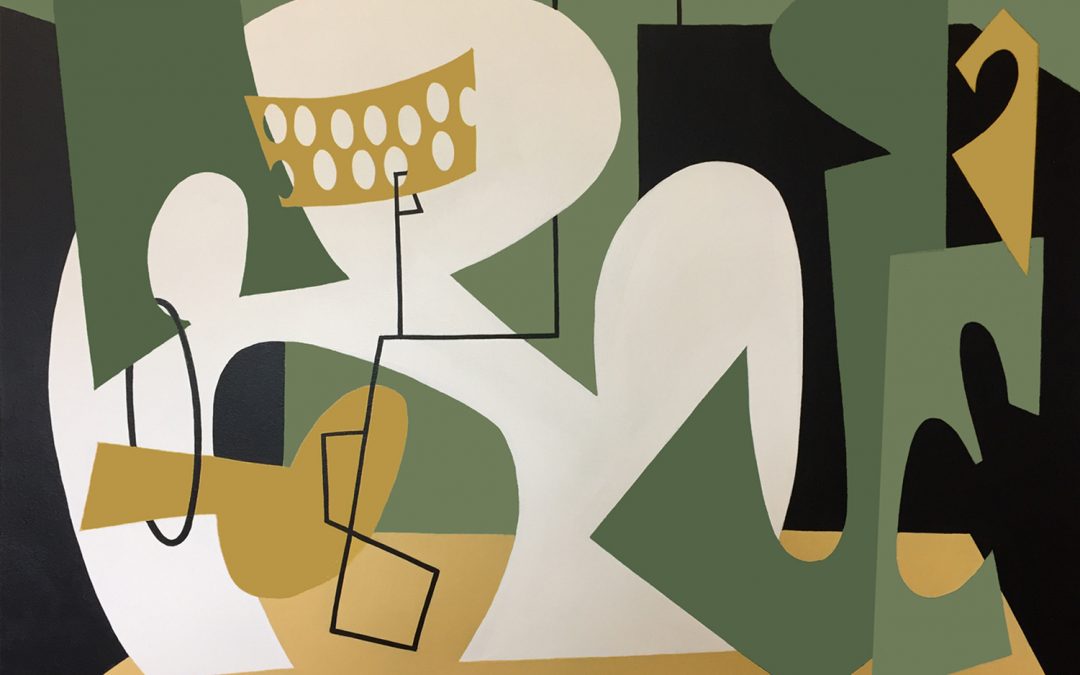 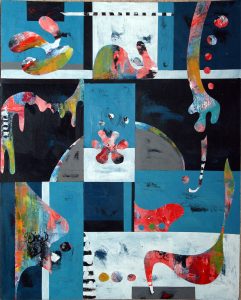 Among the many adventurous abstract painters who are members of this site, Gwen Gunter has perhaps the most unusual CV. She has worked in public relations, as a sign painter for grocery stores, and as the graphics director for a wholesale radio company and a Big Eight accounting firm. She has painted watercolors to sell at weekend art fairs, and decorated plates, mirrors, and handbags that sold in about 250 stores. Then three years ago, she broke through to completely different territory when she took a workshop in Taos, NM. And has never looked back. 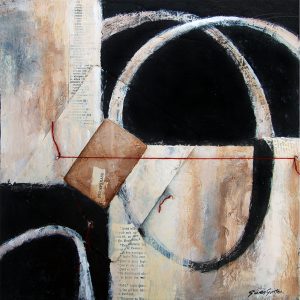 Like many young women coming of age in a conservative household in the South, Gunter was originally destined for a teaching career. She majored in English and literature at Columbia College in Columbia, SC, and got her degree in three years, “vowing every step of the way that I’d never be a schoolteacher,” she says. “I wanted to be an artist.” Her first job was with the South Carolina Hospital Association, a nonprofit trade organization. “I was hired as a writer, but soon started doing the layouts and illustrations for publications, reports and newsletters,” she says. “It was a time when you could get on-the-ground training from printers and other graphics professionals who were kind enough to take me under their wing.” Then she became the artist for the state Department of Agriculture. “I got to draw cows and pigs and chickens. I designed the publications, and did all the posters for the county fair,” she recalls. “I was in heaven!” 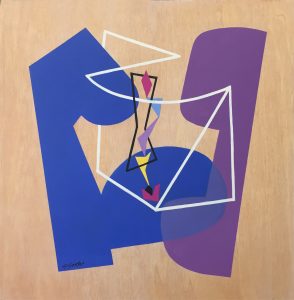 But in 1975 her husband, who worked as an insurance claims adjuster, was transferred to Atlanta, GA. Jobs were scarce because of a recession. “I had always loved to watch sign painters,” she says. “So I found one here in Atlanta and asked him to teach me. He taught me the art of letter forms and sign painting, and as I got better at the craft and technique, he let me take over one of his accounts.” So she painted signs for a local grocery store. “They wanted to pay me in meat,” she remembers. “But at least I was making something.” 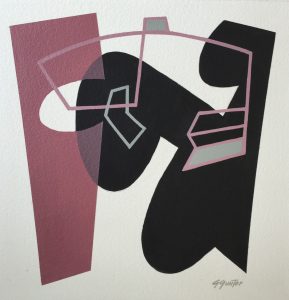 Then came positions as the graphics director for a company that provided radios to car dealers, making whatever was needed for trade shows. And later Gunter served as the art director for Arthur Young & Company, the huge accounting firm that merged with Ernst & Young. “It was not the most creative job,” she notes wryly. 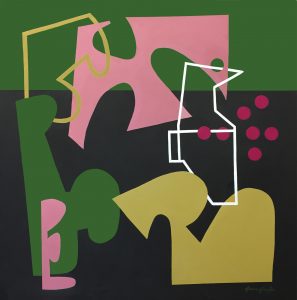 While holding down nine-to-five gigs to pay the bills, Gunter says she was “always painting,” taking classes whenever she could and selling her work at local art fairs. In the mid’90s she veered toward abstraction. “I was experimenting with a lot of things, including collage. They were almost like stage settings. But they didn’t fly,” she recalls “If I had a dollar for everything I made and then was told, ‘You’re a little ahead of your time…’ 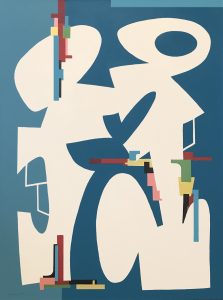 “I couldn’t sell them as paintings, so I started putting the images on decorative plates,” she recalls. “They told little stories.” And they proved so attractive that they were picked up by a rep for a large merchandise mart in Atlanta. “For the next 15 years I was decorating plates, mirrors, handbags.” She found a woman in Vermont who could do the sewing for fabric handbags. “Then one day I couldn’t reach her,” Gunter recalls. “When she told me her husband had left her and she’d sold the business, I felt like it must be divine intervention because I was done too.”

About ten years ago, Gunter started doing abstract paintings on wood  panels from Home Depot. “Then I would take a saw and cut them up. ”Which may account for the jigsaw quality of some of her recent works. 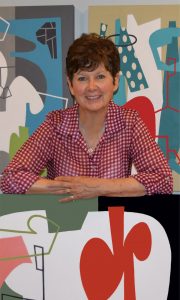 Gwen Gunter surrounded by her paintings

But the real epiphany came in 2015 during a ten-day workshop at the Sagebrush Inn in Taos, NM, with four artists: Fran Larsen (mother of Ted Larsen), Skip Lawrence, Katherine Chang Liu, and Christopher Schink. All were teachers as well as established artists, and the selected participants worked with each intensively. “You had plenty of space. You were encouraged not to talk or walk around and look at other people’s work,” Gunter remembers. “The day I worked with Fran, she came by and looked at what I was doing—and I was doing lots of layers of abstract stuff—and she said to me, ‘I would like you to make drawings of just two shapes.’ I pulled out my sketchbook and said, ‘Like this?’” For years, Gunter had been making what she thought of as doodles just to pass the time when she was not working on other projects. “I said, ‘It’s not a painting.’ And she said, ‘Oh, yes, it is.’ So I started doing paintings of two shapes, and then I did paintings of three.” And that marked the start of a fully mature body of work.

She’s also been successful at scoring exposure without the support of any one gallery, including juried exhibitions in Atlanta, New York, San Francisco, and Alexandria, LA. (Her online sources for juried competitions are Call for Entry and EntryThingy.) “To me it seems like I’m getting a lot more exposure because of my own efforts at getting the work out there.

“I have never quit making art,” she concludes. “No matter who pays attention, no matter whether I’m selling or not. It sounds hokey, but I listen to my intuitions. I don’t know where these shapes come from and I don’t know why. It’s almost as though I can hear the way a painting wants to be.”