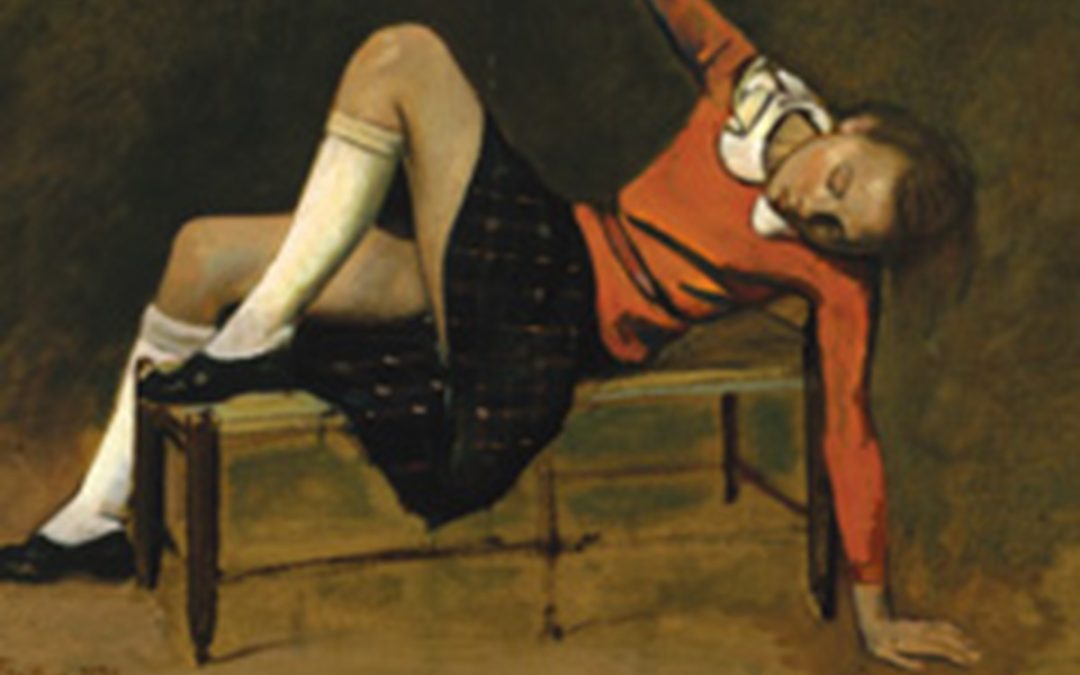 In which I try to have a romance with an older man, a real artist. But Mother knows better.

During my last semester in college, I worked part time at the university store (fondly known as the “screw store” for its inflated prices on stuff like toothpaste and shampoo). Sharing cashier’s duties with me was a woman named Linda, a sweet fluffy 30-ish blonde who, in spite of her big blue eyes and wispy voice, seemed way too smart to be making a career behind a cash register.

When Linda found out I’d been studying art history, and was writing a senior thesis on Kenneth Noland, she volunteered that she was a painter too, and indeed had invented the shaped canvas before Frank Stella. This seemed unlikely, since Stella was making his first notched canvases around the time Linda was 15. But I did go to see the paintings she had stored in a closet in her studio apartment on Palmer Square, and they didn’t look half bad, at least to my 22-year-old eyes.

When I finished the semester, I was also done with college for good in the middle of the academic year, around the Christmas holidays, because I had taken half a year off in some spirit of adolescent rebellion. For about six months, I’d worked part-time as a secretary and rented studio space on the Lower East Side, before it was the Lower East Side, where I made incredibly bad imitations of Robert Motherwell’s Elegies to the Spanish Republic. That experiment didn’t quite pan out, and I wanted to polish off my education and begin entry into the real world. Not as a painter, as I had once hoped, because it was clear that my talents, if any, had to lie in some other direction.

But the “real world” still meant living at home, in my parents’ big rambling apartment on the Upper West Side, until I could find a job and move out. Linda, meanwhile, had decided I needed a boyfriend, an asset that had been missing from my life for at least a year, since the last beau graduated and we lost the connection.

The guy she had in mind was a painter named Frank R, 38 years old and somewhat established in the New York art world because he’d been showing for more than 10 years. In spite of the age difference—16 years back then seemed a gap as wide as the Hudson River—she thought we might click. She decided we had to meet, and came to New York one weekend to make a formal introduction.

“Wow! Here was a real-live artist, a card-carrying denizen of the next big art frontier.”

Frank’s loft was in SoHo, on Wooster Street, then a spooky desolate area of small factory buildings, warehouses, and artists and dealers just beginning to establish the footprint of a community (Paula Cooper had opened the first gallery in lower Manhattan about five years earlier).

Linda and I walked up three rickety flights of stairs to a vast open space unlike any I had seen before, with track lighting and a stamped tin ceiling, an open kitchen-and-living area, and a studio space filled with large luminous canvases. There was a bed too, off in a corner, half-hidden by a screen and presided over by tall arched windows. I thought the whole set-up was completely enchanting, and still today this could be prime fodder for Hollywood fantasies about downtown Bohemia.

I was prepared for the age difference but not for the disparity in heights. I was a willowy five-foot-ten. Frank was a wiry little fellow around five-five. Nonetheless, with his tight curly black hair and muscular chest and arms, and his-tough-guy wit and bluster, I found him irresistible. And I loved the paintings—a kind of marriage of Color Field and woozy geometries that still looks remarkably fresh today, even in online images.

And, wow! Here was a real-live artist, a card-carrying denizen of the next big art frontier, and there was I, newly hatched from the academy, as big-eyed and innocent as Bambi. We hit it off immediately.

Soon I was spending the mornings job hunting, taking endless typing tests, occasionally going on interviews, and the afternoons watching Frank paint, listening to Debussy and Bartok on his stereo, and, well, you know….one thing kind of leads to another.

We did have an occasional evening together, which seemed to be fine with my mom as long as I was home by ten or eleven. And Frank always drove me back to the Upper West Side in a beat-up red Ford he kept in the lot down the block. “That’s the problem with white girls,” he once remarked. “Ya gotta drive ‘em home.” (Not technically true on any front, but he was gentleman enough that he didn’t want me taking the subway or a cab at that hour.)

“At the end of Deep Throat, I glanced over at the spiral staircase, and there was Betty Friedan, with her hands over her eyes.”

Among our more memorable outings was a private screening of “Deep Throat,” which had been around a couple of years but was still a succès-de-scandale of some sorts among the arty set. About 30 downtown types, smoking dope in any possible conveyance, gathered in an elegantly furnished townhouse in the West Village, owned by a cigar-chomping, obviously successful art dealer. Again, I was agog at the possibilities for having an adult life in the city. As a private-school kid in Manhattan, I had seen some remarkable residences on Fifth Avenue and Central Park West, but this was way beyond the upper-middle-class glitz of my classmates’ parents.

I recall being a tad annoyed by the film (was it really all that ground-breaking to position a clitoris somewhere around the larynx? when most guys didn’t have a clue where the clitoris was in the first place?), or perhaps I was feigning a certain sophistication in a refusal to be shocked.

Then, at the end, I glanced over at the spiral staircase and there was Betty Friedan with her hands over her eyes, shaking her head. What she was doing at this gathering I don’t recall or maybe never learned, but I rushed over and blurted, “Oh, Ms. Friedan, I am such a fan of The Feminine Mystique!” She looked at me as though I’d just dropped in from planet Jupiter. (My feminist sensibilities were not particularly well developed back then; though I’d followed much of the syllabus, I had yet to live it to get it.)

There came a time, though, when I was feeling mightily curtailed by my curfew. Good grief—I was almost 23 years old! Eventually I would land a job and find an apartment. Couldn’t I bring my mother to understand that I wanted to spend the night with Frank, wake up in his double bed with the light streaming through the high windows? I tried to drop several big broad hints as I was heading out the door one afternoon in late winter. I thought she was picking up on my clues.

But at four the next morning, the phone next to the bed rang. Frank picked up the receiver. He nodded, saying, “Uh huh, uh huh.” And then he handed the phone to me, adding in the most matter-of-fact tone, “It’s for you. It’s your mom.”

He drove me home before dawn, speeding up the West Side Highway. I entered the apartment to find my mother in her quilted housecoat, seated in a wing-back chair in the living room, a watery gin and tonic at her elbow. She was crying. I crumpled in guilt, asking in a tiny small voice, “How on earth did you get his phone number?” She answered, wearily, “I called every Frank R in the phone book.” (I later looked. There were five. Did every one of them get a call from my distraught mom?)

Things between Frank and me understandably cooled soon thereafter. “You need to find a nice lawyer, or a Wall Street guy,” he told me. And after a few more weeks of interviewing (including for the receptionist’s job at ARTnews, the magazine to which I would contribute for more than 20 years two decades later—but the salary was $25 less a week than a production assistant’s post at Macmillan, and I needed all I could scrape together to find a two-room apartment 20 blocks north of my parents and far, far from the creative ferment of SoHo).

About a year and a half later, bored silly with putting together budgets for textbooks, I was in graduate school at Columbia, studying art history and experiencing a different kind of ferment, the synapses of my brain exploding at lectures by Ted Reff, David Rosand, and Kirk Varnedoe. I started dating a young lecturer from the department and, as a lark one afternoon, we went to see Marilyn Chambers in “Behind the Green Door” at some dive of a movie theater on upper Broadway. We noticed one of the senior members of the department seated a couple of rows ahead of us, his face rapt in a way that was probably never inspired by slides in the lecture hall.

It was amusing, but it simply wasn’t the same as spotting Betty Friedan in a posh townhouse in the Village. Because, of course, I was ever so much older and wiser by then. And on my way to a different kind of adult life.