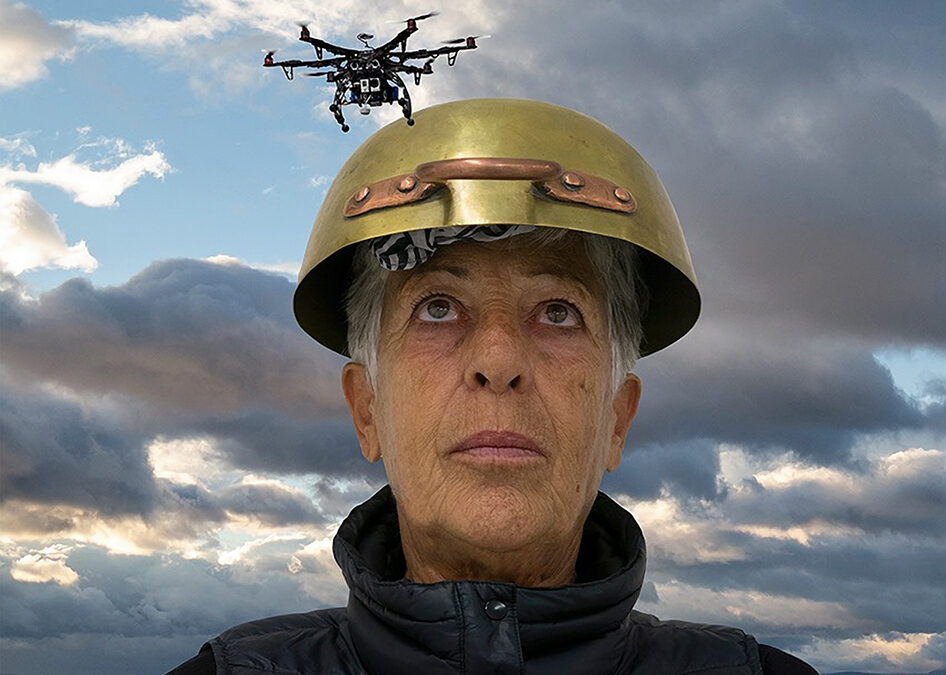 Born and raised in Greece, Eleni Mylonas emigrated to the U.S. in the late 1960s to study comparative journalism at Columbia University. She landed prestigious internships with both Look magazine and WGBH-TV in Boston, and from editorial assignments she branched out to develop her own projects. Her first big breakout was a show of photographic works about Ellis Island at PS 1 in 1986, and since then she has pursued a varied career that encompasses performance, video, installation, sculpture, and painting.

“I strive to create bridges between different realities,” she says in her artist’s statement, and because she has divided her time until recently between Greece and America, she’s managed to establish a stronger presence in Europe than in New York, which has nonetheless been her home for nearly 50 years. Often her work is motivated by politics or by random encounters with the detritus that swamps our world, such as the debris that washes up on the beaches of Greece.

The “Alternative Portraits” series, shown here, was first inspired by the Arab Spring, the anti-government protests that spring up across much of the Arab world, beginning in 2010. “At the start, there was no gunfire,” Mylonas explains. “People would go out from their houses with household items on their heads to protect themselves. I saw the pictures, and they impressed me because the objects were funny but necessary at the same time. I started making drawings and paintings of them and eventually I put items on my own head. Inspiration came from the protestors who were protecting their heads with bread, with plastic bottles, with foam—anything they could get their hands on.”

In time, the series found its inspiration in diverse other sources, as explained in the captions below, and resulted in a show called “The Cursed Serpent” at the Benaki Museum in Athens. “Stereotypical imagery is manipulated with remarkable skill to suggest new identities and roles,” wrote curator Christina Petrinou. “Mylonas assumes those roles with a stately deadpan expression that bears no trace of narcissism, investing each form with a ritual-like quality reminiscent of an Old Master portrait.” All are archival pigment prints, 42 by 60 inches. 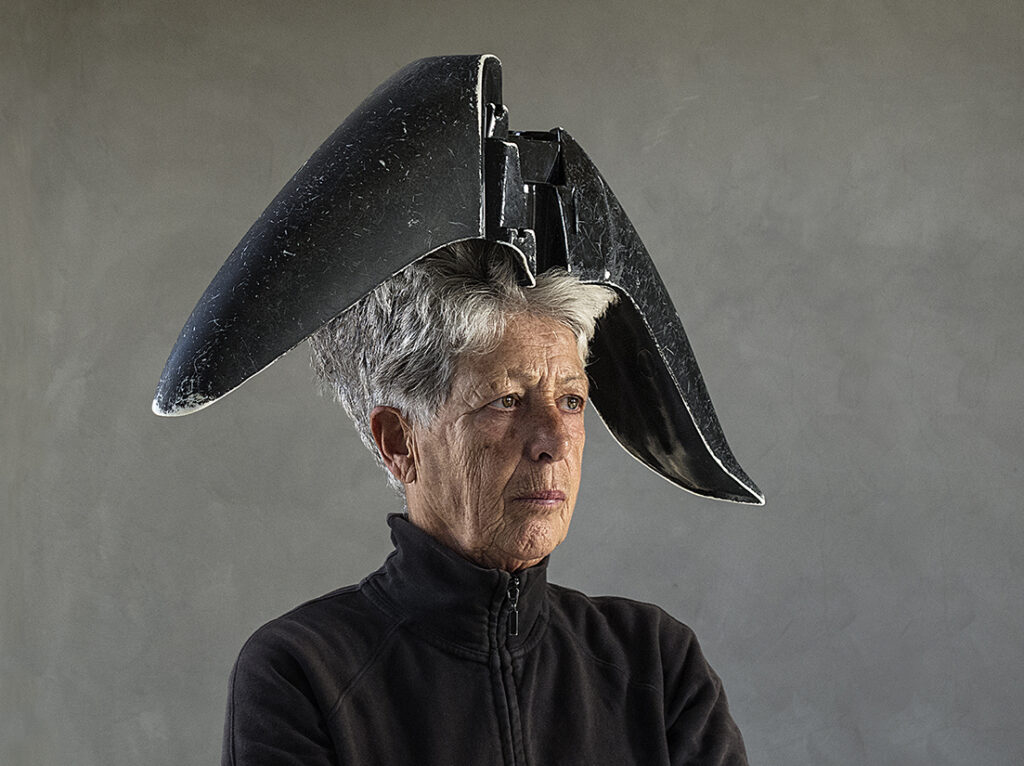 Head Gear #1, aka Napoleon: “This is a plastic motorcycle fender retrieved from the beach on the island of Aegina  It took me a while to decipher what exactly this object had been in its previous incarnation, but it balanced very well on my head. It’s also related to sea garbage, which comes up in several of my works and series.” 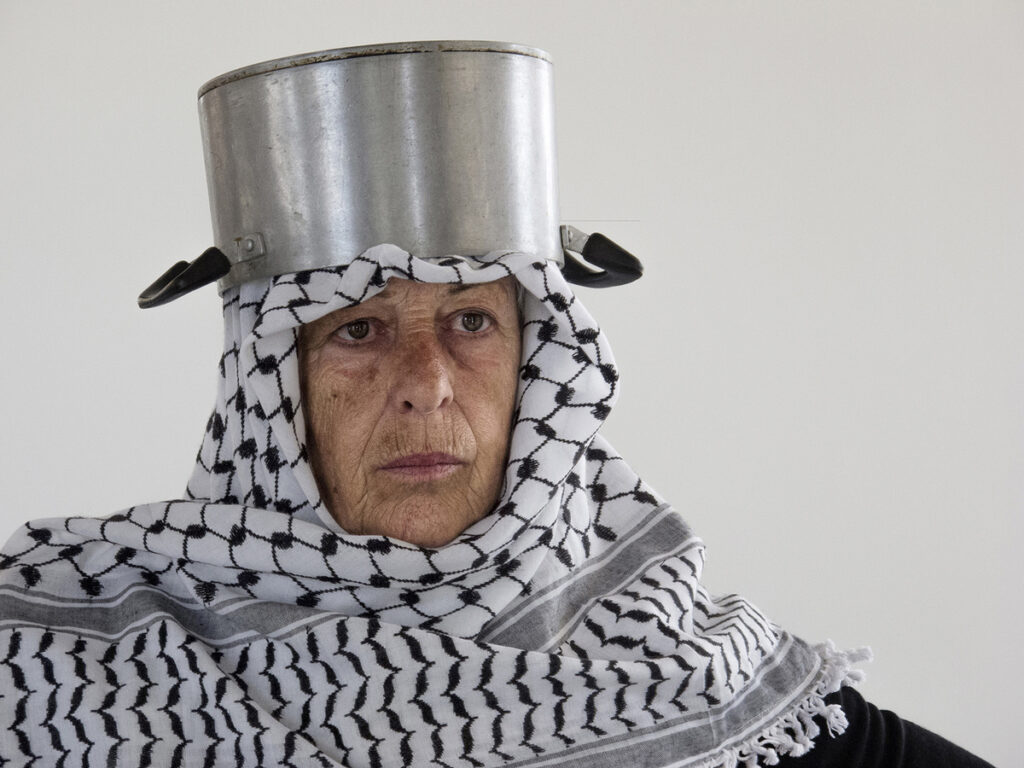 Head Gear #2, aka Eleni Arafat:  “Wearing a saucepan on my head is a direct projection of a news photo I saw of an Egyptian man demonstrating in Cairo’s Tahrir Square wearing a similar pot on his head for protection. I imagined him sneaking into his kitchen to grab a pot and the wife sending him out to the chicken coop to get one she had relegated to the chickens as a feeder. The Palestinian scarf adds yet another angle.” 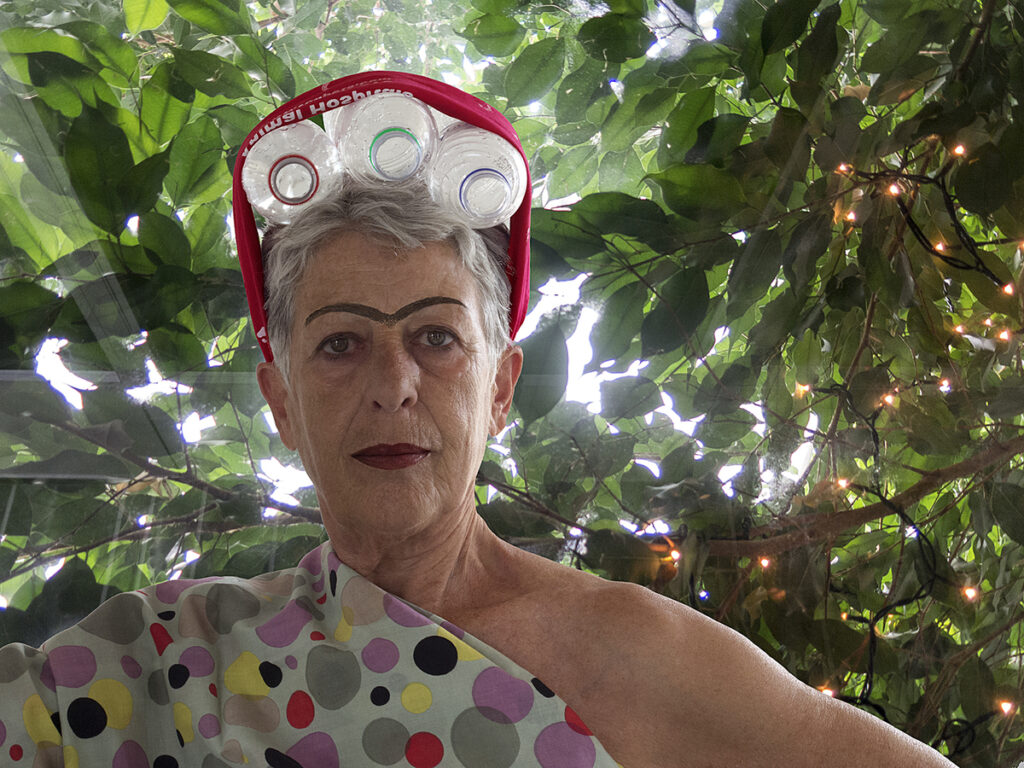 Head Gear #4, aka Frida: “The idea again came from a news photo, this one of a man wearing three plastic bottles tied with a piece of cloth around his head. Frida appeared much later, unbidden, the plastic bottles taking a similar space as the flowers she so frequently wore as a headdress. Having recognized her presence, I added the eyebrows digitally at the end.” 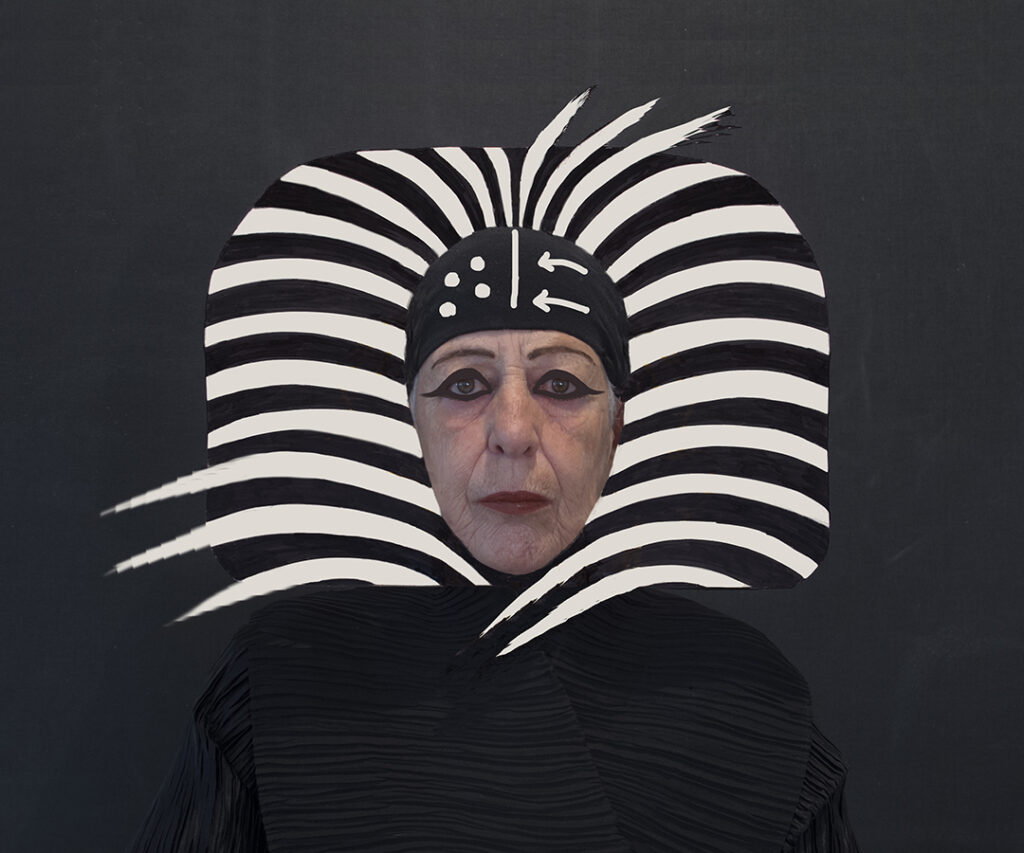 Head Space #18: “This one alludes to a still life photo I had done in my youth (the dots and arrows on the head), in conjunction with a recently created head piece that I wear around my head, digitally extended.”

SeaMonster, Tangled: “One of the first images that came out of a prolonged series, my protest against sea pollution, which culminated in a video that acted as a backdrop for a live 10-minute performance in which I used as props  objects that the video shows me picking up at the shore.” 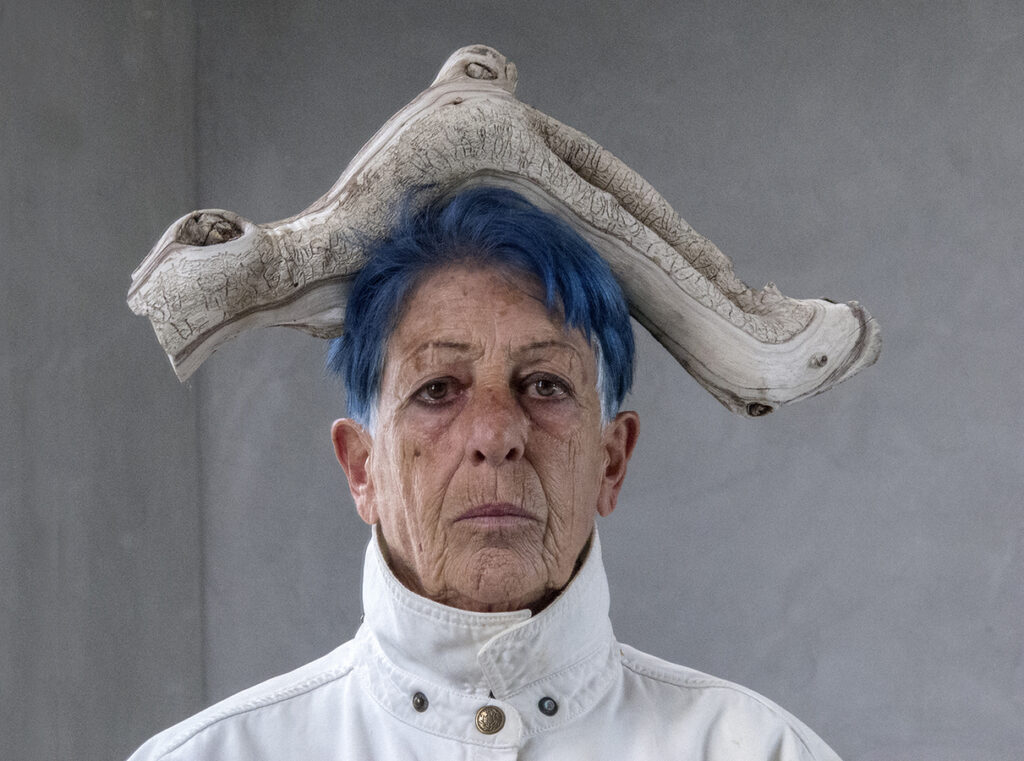 Log Head: “An offshoot of several works and installation pieces created with the magnificently contorted pistachio tree branches that are yearly pruned off the trees that grow on the land around my studio in Aegina. I saved this particular log from the fire and it balanced on my head very comfortably, commemorating the period I was working with logs, branches and other natural materials.”

Top: Her Drone Portrait (aka “not a cloud in the sky”), says Mylonas, “is a statement about our vulnerabilities to actual and unknown threats zeroing in on us.” It was shown at the “Blind Date” exhibition at the Museum of Contemporary Art in Crete in 2019.