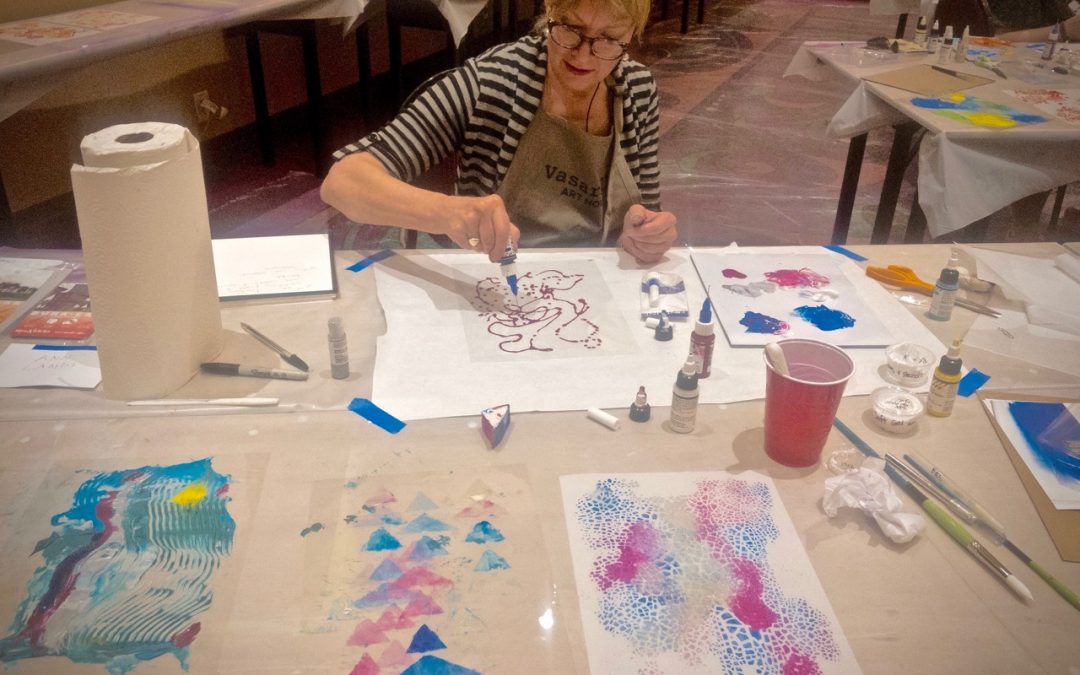 Your fearless correspondent takes another class

It’s always seemed to me that a big part of the fun of art-making lies in the endless amounts of seductive stuff to play with—paints and brushes, pencils and charcoal and pastels, clay and plaster and all kinds of goo, from gessoes to gel mediums to slippery fragrant oils. And then there is the sheer primal joy of getting your hands and your clothes really really grubby. (I suppose cooking provides many of the same thrills, but whatever you end up with generally doesn’t last very long.)

I miss having a studio to mess around in (a loss with the last move, and I’m not sure I’d call what happened there “art” anyway). So when Vasari21 member Barbara Kemp Cowlin told me she was doing a Dura-Lar workshop outside Santa Fe, I was eager to sign up. I didn’t even care what Dura-Lar was about. I just wanted to get down and dirty for an evening. And find something new to write about.

Cowlin’s workshop was held in conjunction with the Artisan Materials Expo at the Buffalo Thunder resort outside Santa Fe. This is a kind of huge trade show cum shopping nirvana, with 60 vendors plying their wares in four tiers of booths. Much of the material is discounted, and the goods range from colored pencils to easels roughly the size and complexity of some of the machines at my gym. The temptation to stock up on stuff I could not even find a spare shelf for was huge, and I considered myself lucky to walk away with only a sketchpad and a nifty roll-up canvas pencil case.

At the expo, Barbara gave a brief demo of all the nifty things you can do on Dura-Lar, a clear or translucent material, roughly the weight and density of a plastic folder for a term paper, which comes in sheets and rolls. (Please be advised that I am in no way a shill for the company: all I got out of this was a free class, some samples of Dura-Lar, and a few small vials of paint.)

The class itself took place in late afternoon (at a time when I was seriously running out of steam) in one of the conference rooms adjacent to the expo. My thinking was that I would give it a couple of hours and then quietly make a beeline for the exit. There were seven of us altogether, each with a long table holding several sheets of Dura-Lar, a smattering of Golden-brand paints in rather odd colors (like magenta and teal, along with iridescent gold and silver), little cups of mixing mediums, brushes, paper towels, a cup of water, and plastic palette knives. 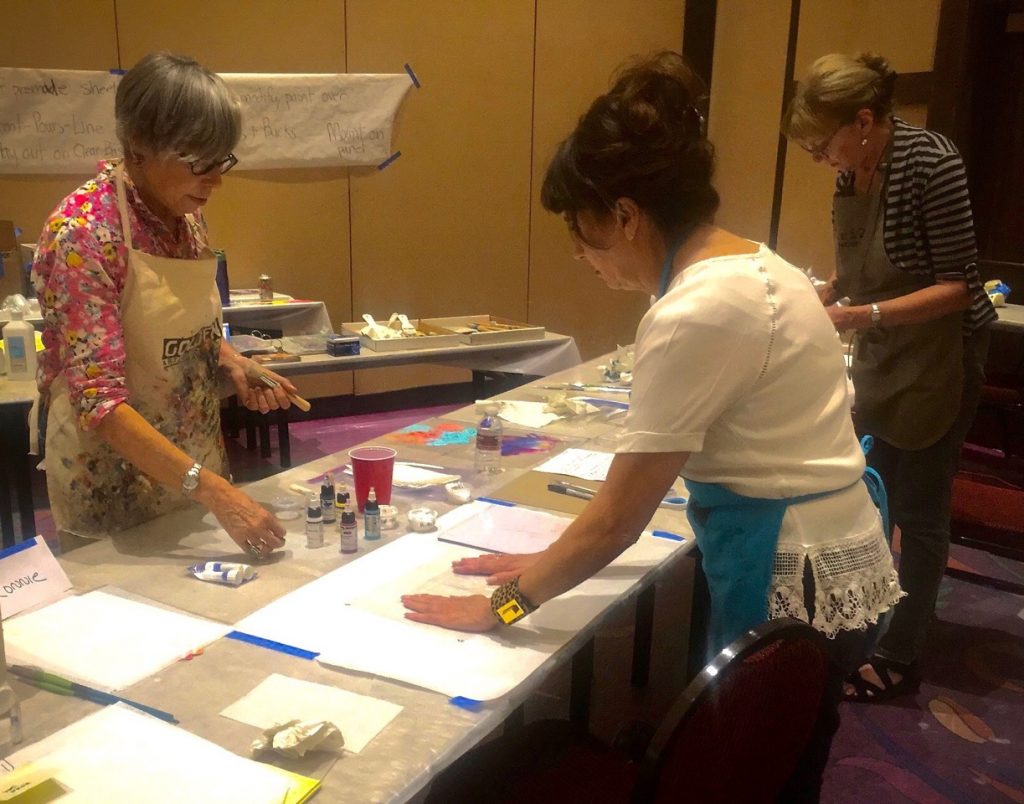 The first exercise, which Barbara demonstrated from her post at the front of the room, consisted of mixing colors with a gloss medium, and then “puddling” them on a sheet of Dura-Lar (a variant of pour techniques used by painters like Helen Frankenthaler and Carolanna Parlato, on unprimed and primed canvas). I chose to work with quinacridone magenta, pthalo blue, and iridescent gold, mixing each with a generous amount of gloss goo and then dumping magenta and blue in small pools on a sheet of 9- by 12-inch sheet intended for “wet media.” I tilted the sheet this way and that, and after I got a pretty nice rhythm going—the blue and red produced gorgeous vibrant acid-green rivulets—I gently added several drops of gold. And cautiously tipped the colors again until intriguing fissures appeared on the sheet, and a double puddle of gold settled in the far right. I stopped before the whole thing threatened to turn to Dura-Lar stew. 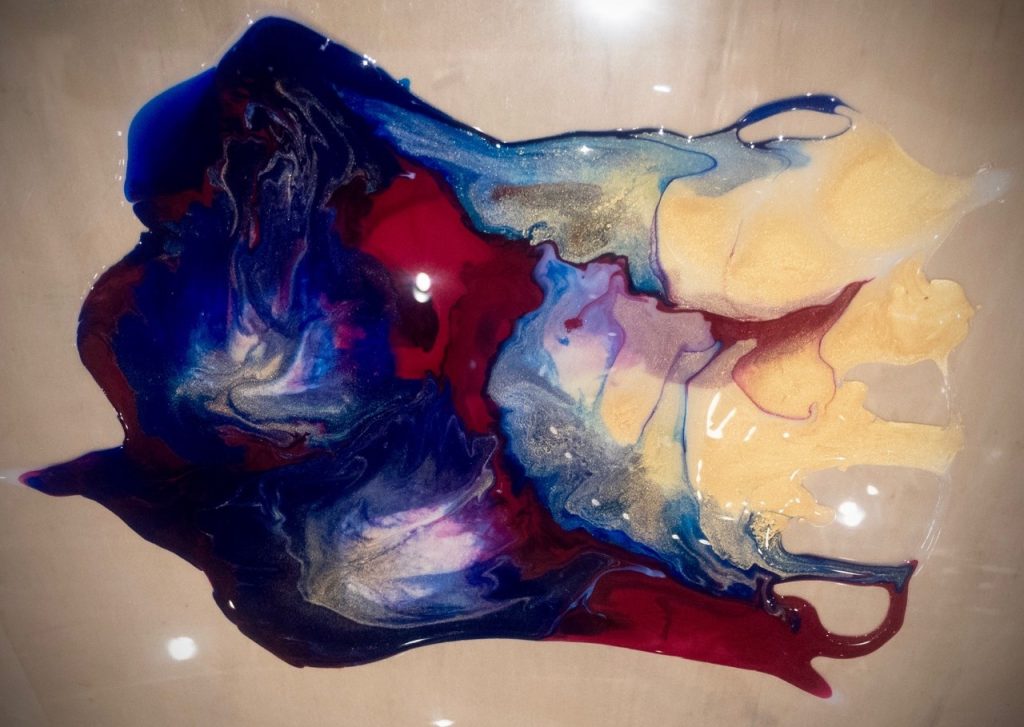 A brilliantly poured blob by the author

And then we moved on to the next demo. Barbara showed how to mix colors with modeling paste, spread them on another transparent sheet, and then rake through with devices like adhesive spreaders or a serrated knife to achieve textures. I tried to keep it simple, but was not terribly pleased with the result, nor did I like the cake-frosting texture of the paint. So I was happy to embark on a new exercise.

We proceeded at a fast clip, which was perhaps a good thing, because there was not much chance of spoiling any serendipitous spontaneity, but the speed with which we advanced also meant there also wasn’t time to see what other people were up to. The third exercise entailed cutting out stencils and using sponges to dab on color. I folded a sheet of Dura-Lar in half and carved out simple triangles, having in mind a kind of pyramids-in-the-desert effect. But the results looked simply messy, as did exercise number four, using ready-made stencils.

By the time we were on to the fifth maneuver—squeezing out fine lines through special tips attached to the vials of paint—I felt like maybe I’d found my groove. The skeins and dribbles of paint seemed to signal that  I was channeling Jackson Pollock (one of the great disadvantages for the would-be artist who has spent decades looking at art is that everything you do reminds you of something that’s already been done). When it got a little too Pollock-y, I introduced several skeins of gold and coaxed swirls of silver into a glowing volcanic pool in the upper right. Lovely. 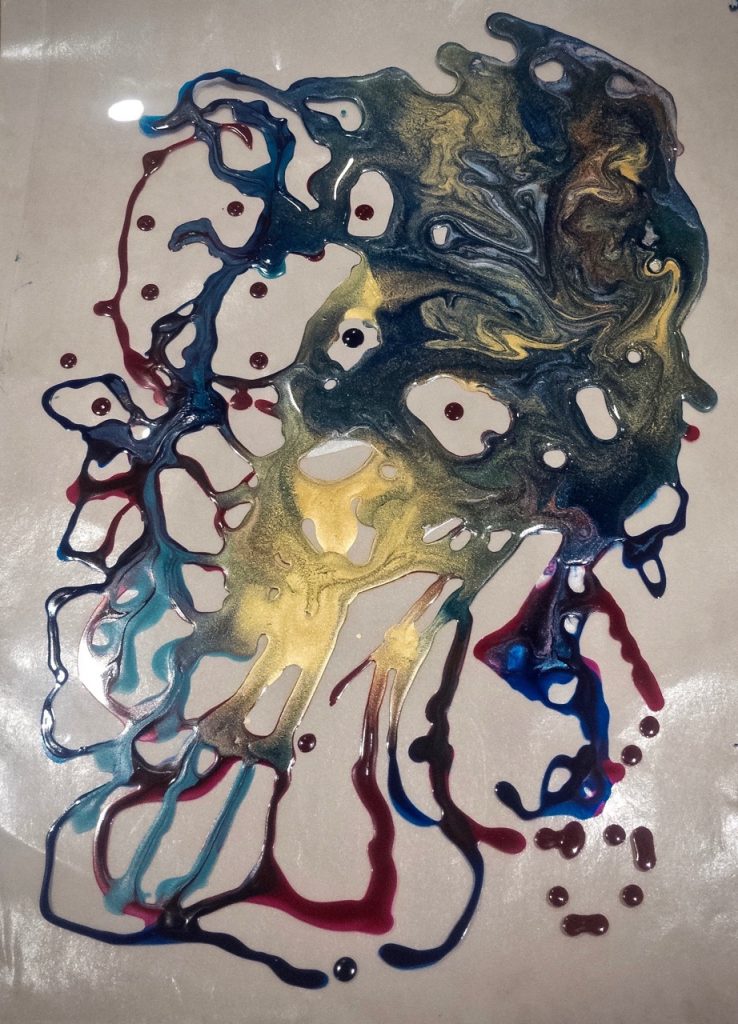 And next we used a brayer, or roller, to spread paint around on one of the translucent sheets. At first I’m getting a nice looping Cy Twombly sort of calligraphy, but then I spread the paint clear to the edges. The result is only slightly more sophisticated than a child’s finger painting. 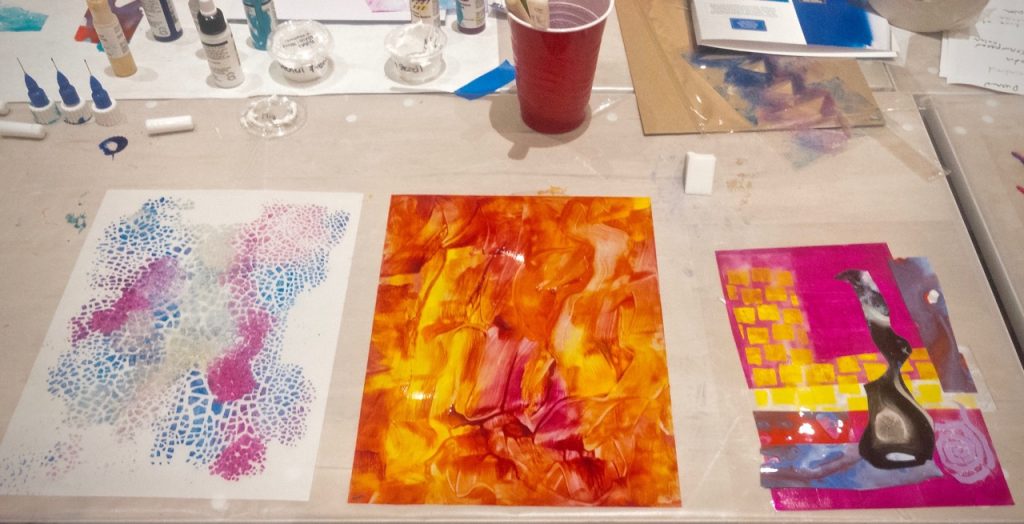 Experiments with stencils, a roller, and collage

The last exercise was perhaps the most challenging but also the most fun: to create a collage out of sheets of Dura-Lar that had already been stenciled, puddled on, or smeared with color but not otherwise given much coherence. Barbara showed us the way in which these could be layered to take advantage of the transparency of the material and then flipped over to reveal another image entirely. I cut out a bunch of random shapes and small rectangles, glued them down, and was not displeased with the results, which included a friendly elongated black-and-white biomorph dominating the right half of the sheet. But the woman next to me made a terrific assemblage from lilac- and blue-stenciled sheets juxtaposed against hard-edged shapes in magenta and darker blues. On a small scale, this had a real vibrancy and rhythm. If she ever chooses to go bigger, it might be a knockout. 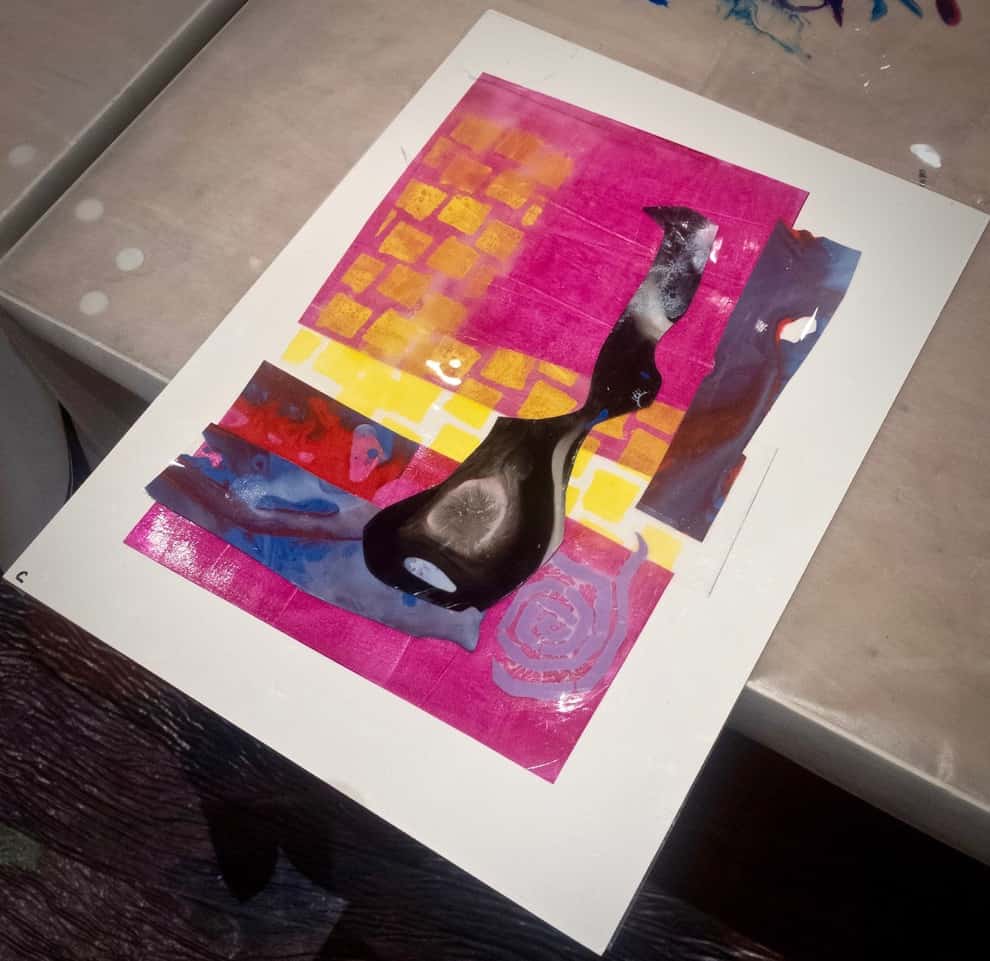 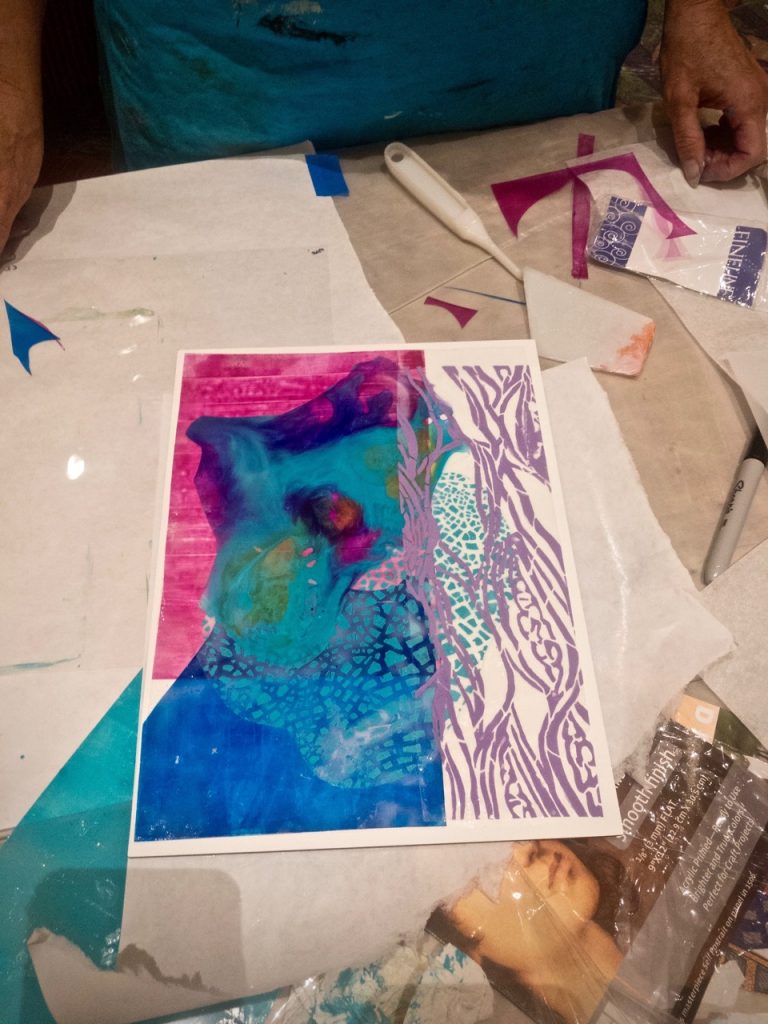 A better effort from another student

Both Barbara and Kate Petley are established artists who’ve used Dura-Lar in their works. Barbara’s painting (on the right, below) relies on the some of the techniques she showed us in the workshop. Kate’s process is more complicated, using three layers of different kinds of film to make the collage (at left). “I use Dura-Lar—and many other types of films—to create the temporary collages that form the basis of my paintings,” she says.  “The transparency of the material allows a lot of control over the outcome. Once an image is printed on to canvas, Dura-Lar is often used again to determine where and how I will paint onto the surface. Essentially I create a rough painting on the Dura-Lar and because it’s transparent, I can figure out what I’m going to do without affecting the real surface until I’m ready to take that step.” 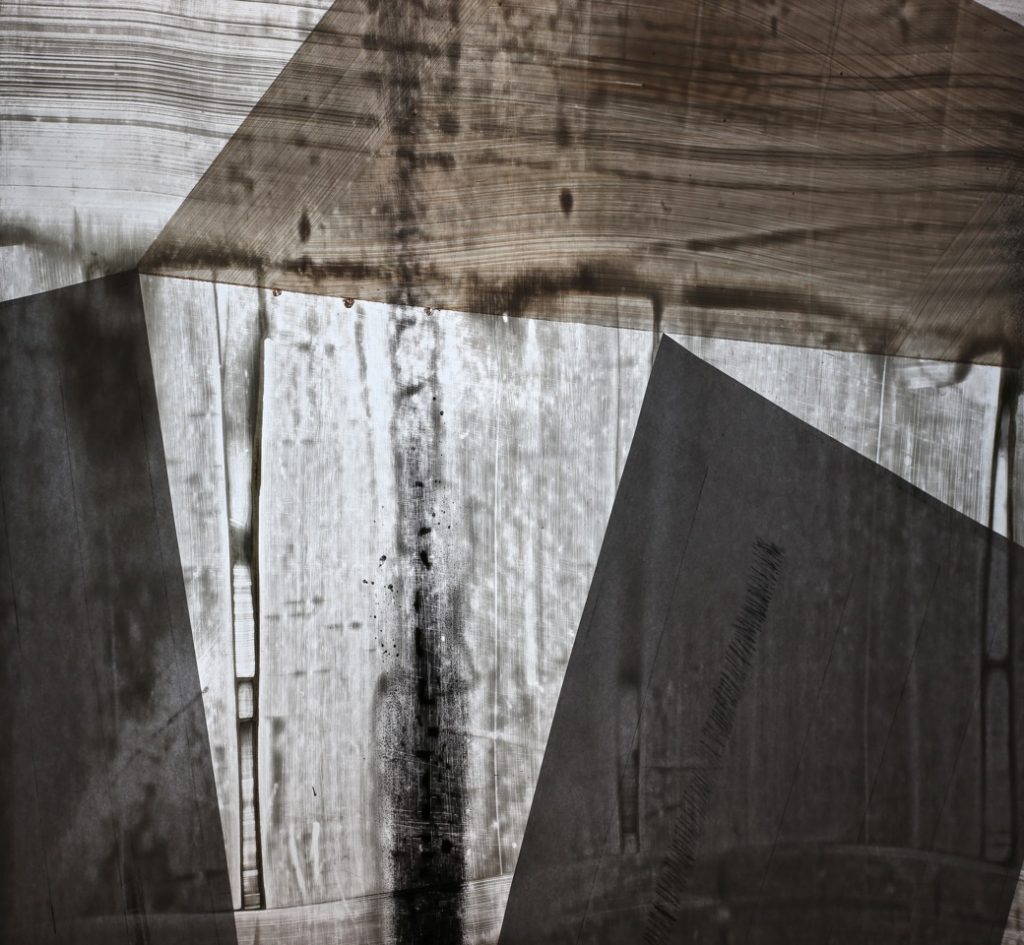 Kate Petley’s collage using Dura-Lar (the brownish shape), which may eventually morph into a painting, 2016, 14 by 14 inches 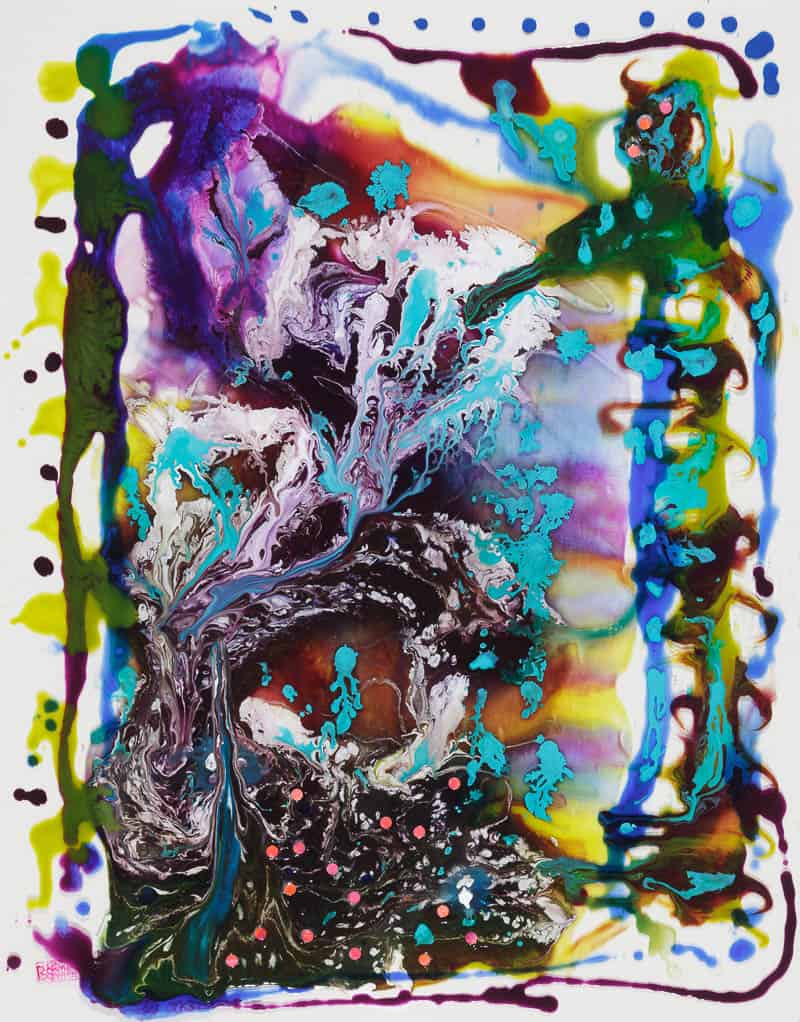 I’m guessing that all of us who took the workshop are basically hobbyist dabblers in art, like myself, but I can see the usefulness of classes like these even for the dedicated artist. The exercises and unfamiliar materials prodded my visual thinking in new ways and made me eager to experiment with some of the ideas unleashed here.  I, for one, was sufficiently motivated to look for new studio space.

Top image: Ann Landi, would-be artist, at work. All photos, except the collage from Kate Petley, by James Cowlin