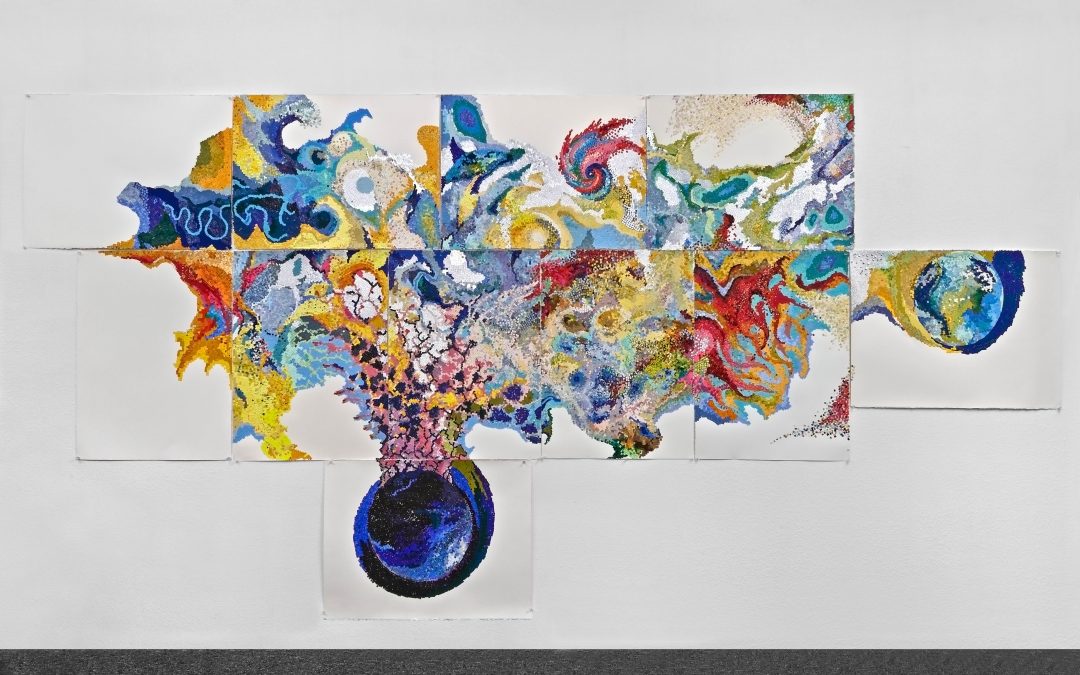 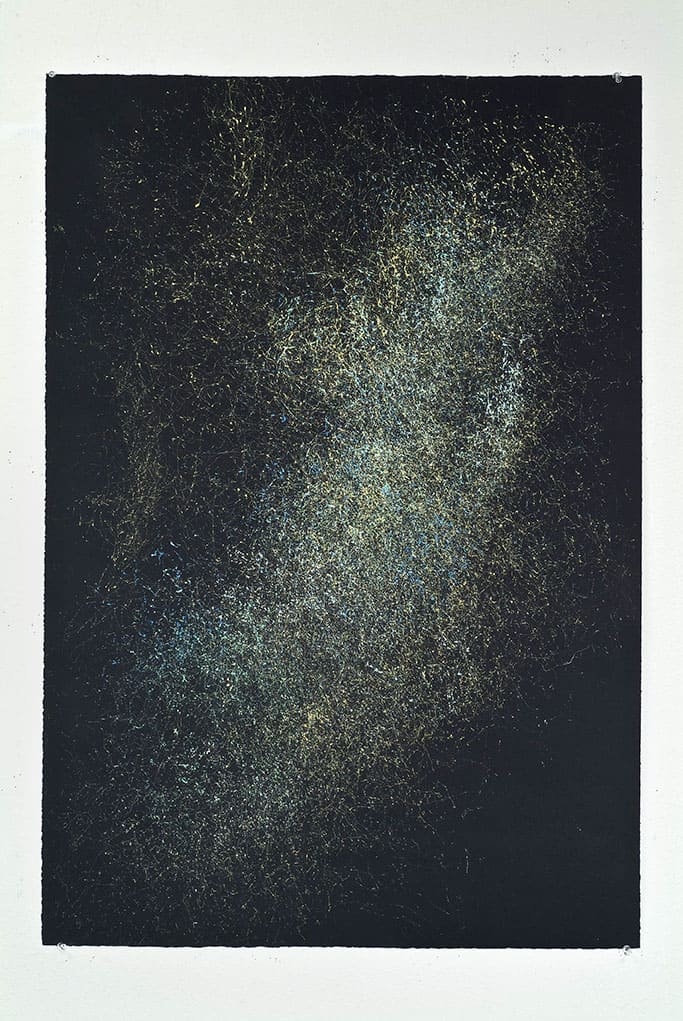 “Landscape is something I’ve always gravitated toward,” says Virginia Katz, whose work for the past 15 years or so in one way or another incorporates a fascination with wind, water, and land. Though born in Brooklyn, she spent most of her childhood in upstate New York, in the then-largely rural area of Cornwall on Hudson, where her father was head of forestry and the landscape architect for the roads and grounds department of the military academy at West Point. “I was deeply influenced by the work he did,” she recalls. “I learned about trees and plants, and the natural world was often a topic of dinner-table conversation. We lived in the woods, and as a child that’s where I often played.”

Nonetheless, when it came time to think about a career, Katz’s father discouraged any artistic inclinations. Like many a protective parent, he told her, “You can’t do that. You’ll starve.”

Katz headed west for college because by the time she was a teenager she realized she wasn’t a “New York girl.” The cold and gray weather sent her in the direction of sunnier climes, and she attended California State University Fullerton, just south of Los Angeles. As an undergraduate, she majored in philosophy which, she says, “really dovetails well with the life an artist. The subject taught me how to articulate what I was after, what I was doing, and the significance of landscape to my goals.” 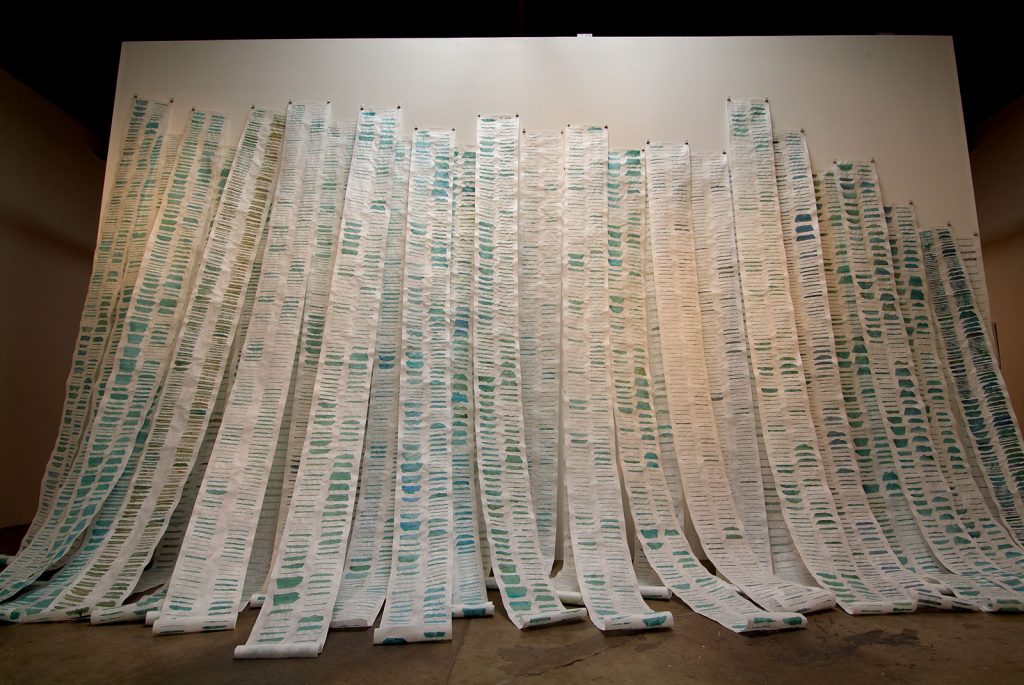 She also acquired an associate’s degree in business and for a time worked in a law office, where she met her future husband. Though she was always painting on the side, her ambitions didn’t gel until she decided to pursue an MFA at California State Long Beach. By then she had two children in elementary school, and discovered the degree would take four years. “I had to do a lot of post-grad work, two years of catch-up before I was accepted into the program. I worked really hard because of I loved it. I didn’t have any formal art training, and that was something I wanted to acquire—technical skills, art history, studying the import of why artists do what they do. I wanted all of it.” (Of the difficulties of attending classes full time while raising two children, she says, “They were in elementary school when I went back for graduate work. While they were in school, I could be in school. It worked out fine.”) 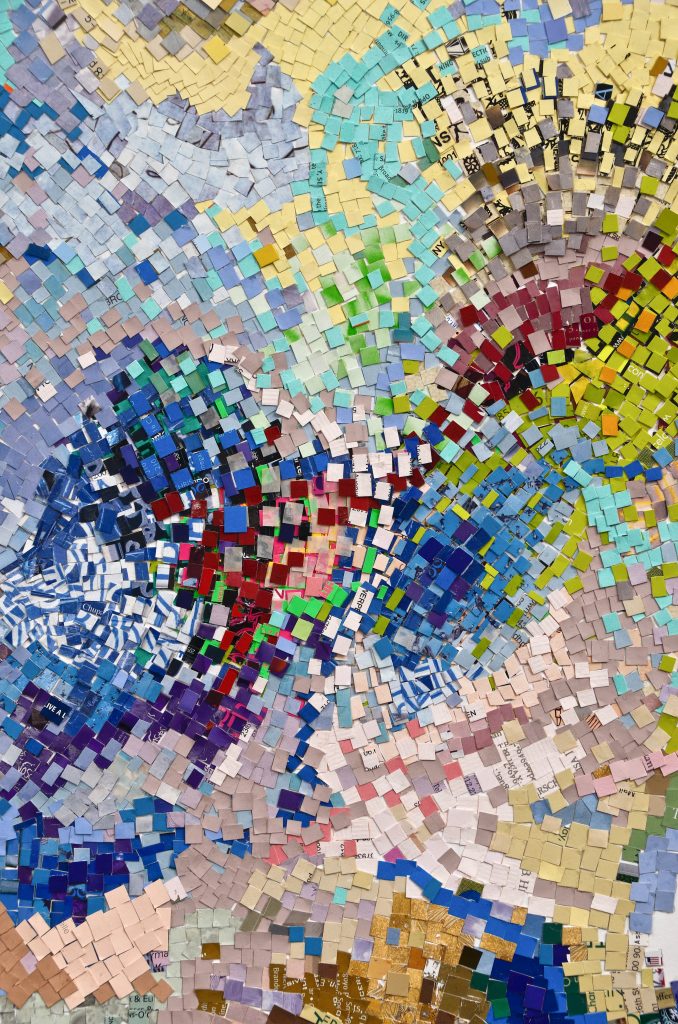 For a long time, as part of her engagement with the landscape, Katz was doing plein-air work. “While I was spending long periods of time outside in the hot sun, or on windy days, cloudy cold days, I began to notice different things,” she says. “The wind and the sounds it made. I started noticing airplanes and flight paths, and I started incorporating my thoughts about those into my work. For one early series, she tied string to tree branches, with pens attached to the ends. “The paper was weighted on the ground and, when the Santa Ana winds blew, it was the wind’s force that moved the branches and then the pens that left traces of the wind’s movement on paper,” she told another interviewer. “I would remain with the process in gale-force winds for up to 16 hours to record these wind events.

“It was a collaboration between me and the wind,” she adds.

For another project, she headed for the beach with a scroll of watercolor paper, spending a few hours a day for 130 days, recording the patterns of breaking waves. “With every wave that broke, I painted a line,” she says, “and the lines corresponded to the thickness of the ocean wave. Typically, ocean waves break in groups of seven, and then the sea flattens out. So after a while you can read these scrolls and see the pattern of the ocean tides, and how storms influence them.” 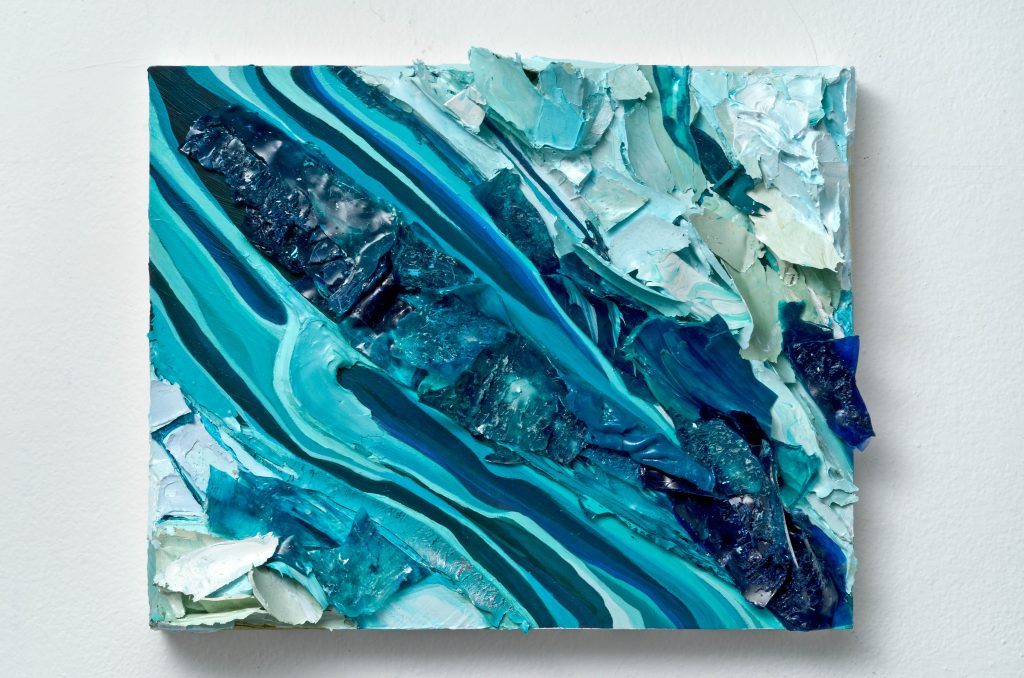 One idea seemed to flow effortlessly into another. “While I was working at the beach, I noticed that I was under a flight path,” Katz recalls, “I downloaded information from aircraft arriving from all across the country, and then I documented and color coded them.”

For other projects, the artist has observed the movements of people at shopping centers and parking lots and made art from the pieces of paper she accumulates in her daily routines. The results, like Momentum and the works on acetate from “Form and Function,” are often delightfully airy constructions, as ephemeral and fleeting as the events and actions they describe.

Another series was inspired by looking at satellite imagery, extrapolating from photographs while making her own topographical work. These inspired her to make “three-dimensional paintings,” a pursuit that’s been ongoing since about 2007. “For some reason, I never allowed myself to paint,” she says. “I always wanted to use acrylics and oils but I didn’t have a good reason for it.  I wanted to bring into life those landscape expressions we typically have known in two-dimensional painting to three dimensions.  The landscape and our literal, physical nature come together.” The results are richly sculpted landscapes made from paint and gesso on panel, invitingly tactile images that capture some of the dramatically sensual qualities of the surfaces of land and water. 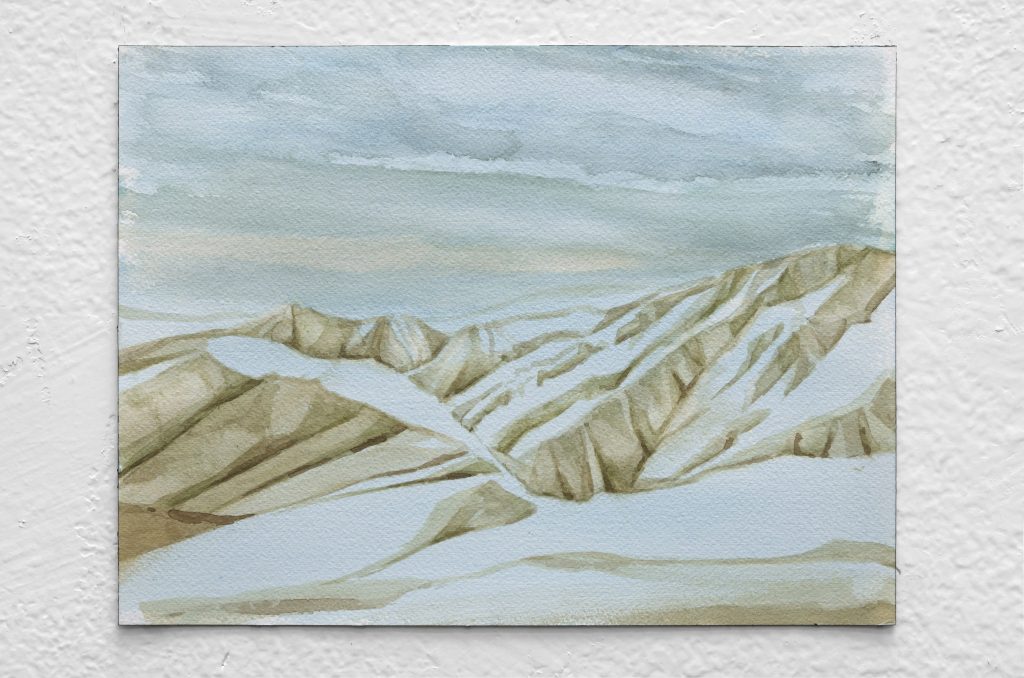 Diagnosed with breast cancer in October 2015, Katz has found herself “relating that process to my experience and embracing the vulnerability of life in my works.” It was difficult to pursue her ideas on a large scale because of the surgery and so she turned to small watercolors in a series called “Dissipation.” The works also reflect a visit five years ago, when she toured Japan in the wake of the earthquake and tsunami of 2011. “It was an incredibly powerful experience, seeing the effects of nature and the devastation caused,” she recalls. “But I didn’t want to exploit it. I kept my observations to myself. After the ordeal of cancer, however, I wanted to incorporate the Japanese visit into my work. It felt like I’d endured a personal tsunami.  My experience of being sick led me to examine colorlessness, transparency and destruction within the landscape as metaphor for the body. 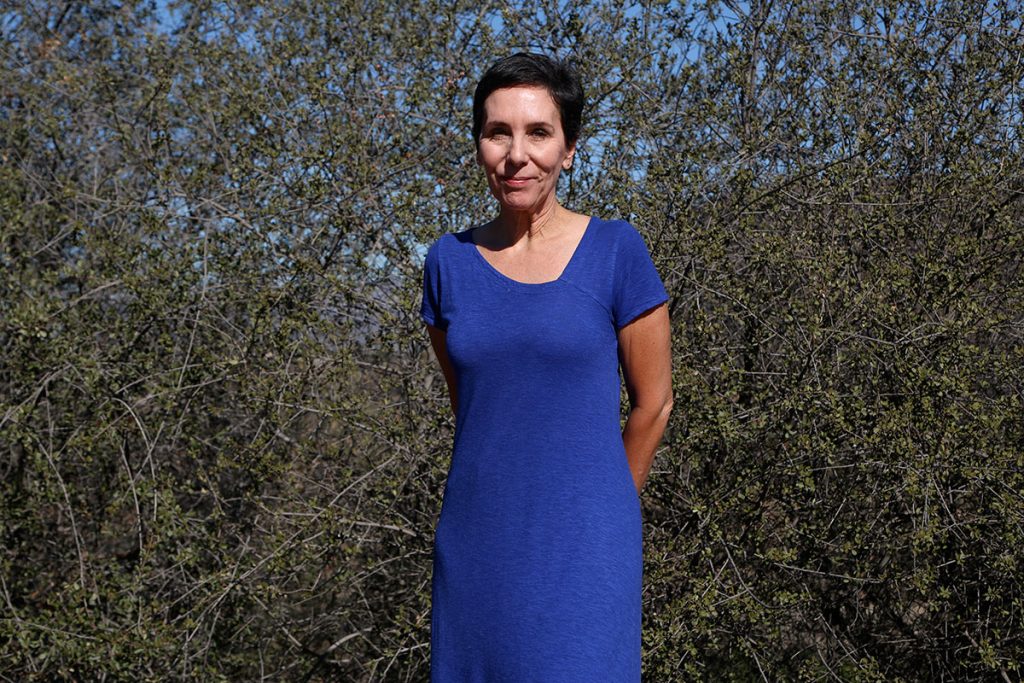 Virginia Katz lives in Irvine, CA, and has shown her work in numerous group and solo exhibitions nationally and in South Korea, Paris, and Ontario. She is represented by Ruth Bachofner Gallery in Los Angeles, and has an upcoming solo show there in June and July of 2017. Katz will also take part in the exhibition “Liberty and Justice for Some” at Walter Maciel Gallery in Culver City, Los Angeles, January 7-March 4, 2017.