So Long at the Fair?

Love ‘em or hate ‘em, the art fair appears to be the major marketing phenomenon of our times. Artsy.net, a site primarily for collectors, lists 60 top fairs worldwide, with ballpark estimates for maintaining a booth at one ranging from $15,000 to more than $100,000 for just a week or so. Dealers complain of 16-hour days, collectors who “buy with their ears,” exhausting travel, and a back-breaking workload for the gallerist and her staff. “We spend months putting these shows together,” says Lesley Heller of Lesley Heller Workspace on the Lower East Side in New York, “and it’s like another full-time job on top of this full-time job.” Adds Cynthia Reeves, who maintains galleries in Walpole, NH, and at MassMoCA, “You’re constantly crating, shipping, getting work back. I have an employee dedicated to this kind of due diligence.”

Dealers complain about the “art fair” mentality and “buying with your ears.”

And of course there is a pecking order in prestige, with Art Basel (in operation since 1970) and its more recent offshoots in Miami Beach and Hong Kong being among the most competitive and highly esteemed. Many mid-tier galleries consulted for this report don’t bother with the high-end shows, focusing instead on doing between about one and ten a year globally, with Pulse, Frieze, Scope, Paris Photo, and the Armory being among top choices. “Twenty years ago these used to be trade events,” notes Mary Sabbatino, vice president of Galerie Lelong in New York, “but now they are globally significant. Curators come, artists come. These are information-gathering meccas.” 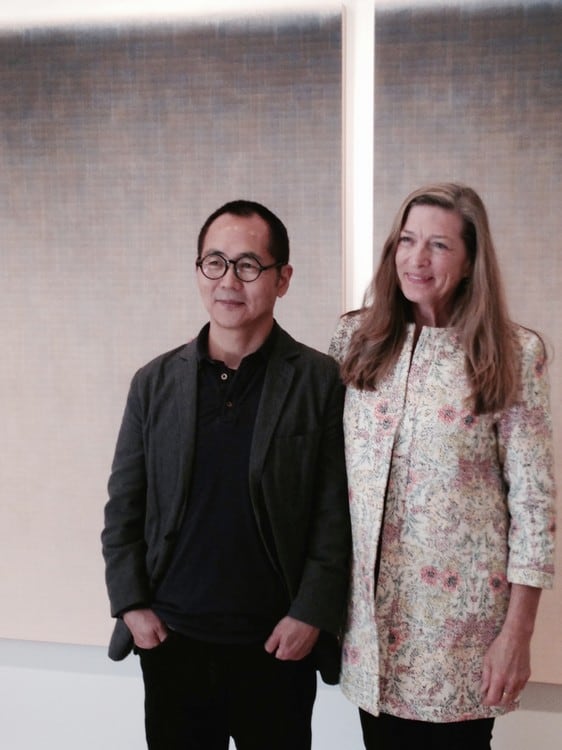 And new fairs crop up all the time. Reeves is especially enthusiastic about the newly established Seattle Art Fair, masterminded by collector and Microsoft co-founder Paul Allen. “He created an interesting platform for artists out of his own collection, and a lot of blue-chip galleries migrate to Seattle.” Because one of her artists, John Grade, is a home-town guy known for his huge hollow tree-like pieces, she says “it’s appropriate for us to have a presence there.”

And then there are the myriad smaller fairs (with more than 180 fairs altogether, it’s only plausible that some are real duds). “I’m waiting for Art Basel Des Moines,” says critic Peter Plagens. “And for ‘artbasel’ to make it into the dictionary as a verb.”

A Lousy Way to Look at Art?

“Fairs aren’t as good as gallery or museum shows because they’re anti-contemplative—nobody looks at any piece of art for very long,” adds Plagens. “That’s why so much on view is bright, shiny, gimmicky, pseudo-shocking, and easy to comprehend. Fairs are predicated on quick looks and one-stop shopping, actual and metaphorical.”

“The first time I went to an art fair was in Basel, back when it really was just in Basel,” remembers critic Kim Levin. “I planned to stay the weekend, but after a half hour, I had an art-panic attack. I was dizzy, nauseous, and claustrophobic from the endless little booths. I avoid art fairs when I can. They’re interesting as sociological phenomena but no place for an art critic.”

Peter Frank, a critic based in Los Angeles, worries that fairs “are such a high-profile industry that they impact the way people in general look at art—not just as commodities, but as ‘wall things’ and space occupiers, devoid of context.”

Dealers too complain about the “art-fair mentality” and the kind of collector who typically attends fairs. “When we present an exhibition at the gallery we try to allow for a fuller understanding of an artist’s work,” says Yancey Richardson, whose New York gallery specializes in contemporary photography.. “At an art fair we often have only one piece.” Valerie McKenzie of McKenzie Fine Art. “There is a big problem with fair fatigue for the viewer and unfocused visitors for the gallerist. It’s not the best way to learn about an artist or a gallery, but unfortunately many collectors do the majority of their buying at fairs now.”

“Long-time veteran collectors often don’t come to the art fairs,” claims Richardson. “Other people make it part of their life style. It’s like clubbing when you’re in your twenties.” And yet, notes reporter Judith Dobrzynski, who writes for The New York Times and The Wall Street Journal, the one-stop stopping can attract high-end collectors to the top-ranked fairs like Maastricht and Art Basel: “If I can see galleries like Blum & Poe, Hauser & Wirth, Paula Cooper and David Zwirner all in one city, and they’re bringing their best work, of course I’m going to go. And collectors have told me that they like the social aspects of fairs.” 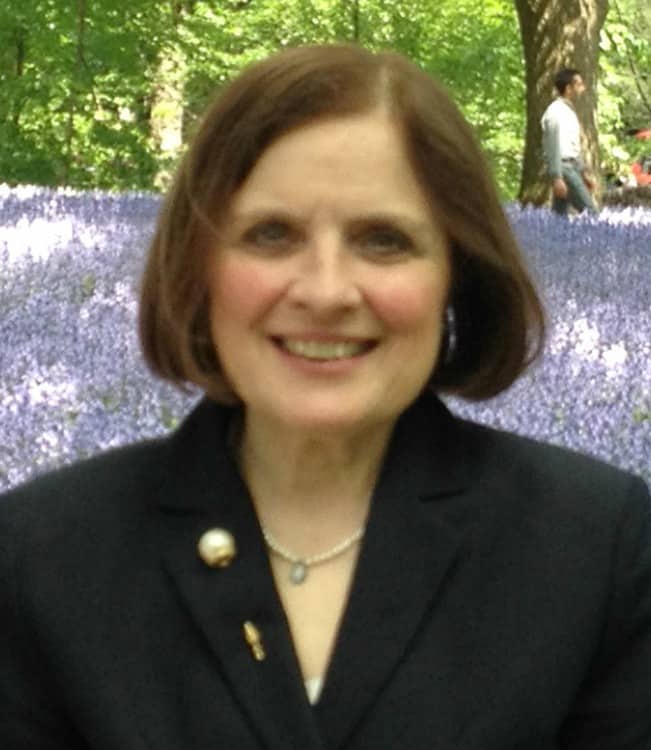 Socializing at all levels seems to be a big part of the agenda, which may be frustrating to critics (though Plagens says he likes the free lattes he gets with his VIP pass at the Armory) but can be hugely advantageous to the dealers and artists. “It’s a confab,” notes Richardson. “If our artists are in the room, and we see a particular curator, then we’ll try to grab her so that they can meet.” It’s also a way of “getting new and interested eyes on what we do,” says Reeves.

Who Gets to Go

Why some artists are chosen by dealers to show work at art fairs and others are not is a process varies from gallery to gallery. “We try to choose artists we believe to have a strong following, or an artist whose audience can be developed” says Mary Sabbatino of Galerie Lelong.  “If an artist has a museum show nearby that’s also an important factor.” Discussions about who will go begin “far in advance,” she says, and afterward “we discuss which artists we were glad we showed and which didn’t resonate with the audience.” 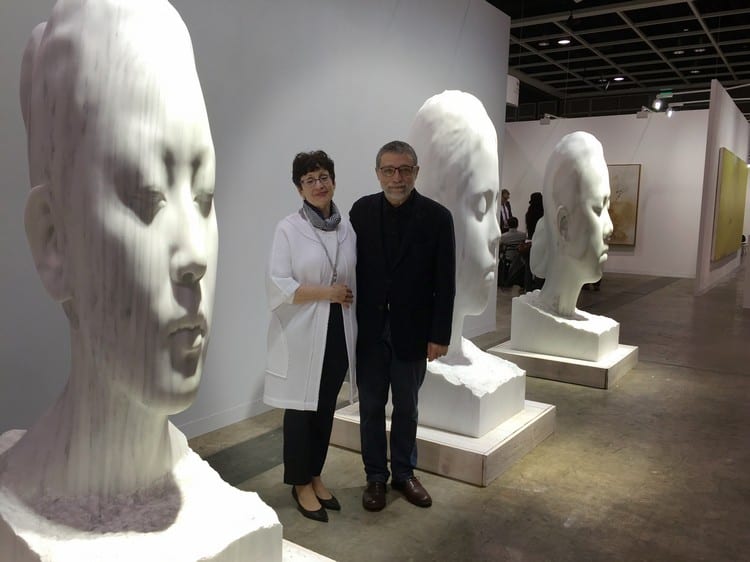 Artist Jaume Plensa, who made a special group of sculptures for the Galerie Lelong Booth in Hong Kong, with vice president Mary Sabbatino.

“You work for months figuring out the art,” says Kim Foster of Kim Foster Gallery in Chelsea. “You have to decide what your booth is going to be about. And if you bring everybody, the booth looks crappy, so that’s going to bend some artists out of shape. The best-looking, she believes, “are usually just one artist. That’s what the big galleries do.”

“I stopped a very long time ago trying to please the artists with the art-fair selections because the art fair is very a commercial venture,” says Richardson. “And it’s very expensive. You can’t plan it with some sort of consensus in mind. We try to present a very curated booth, and to the best of our abilities we allow each artist a single wall.” 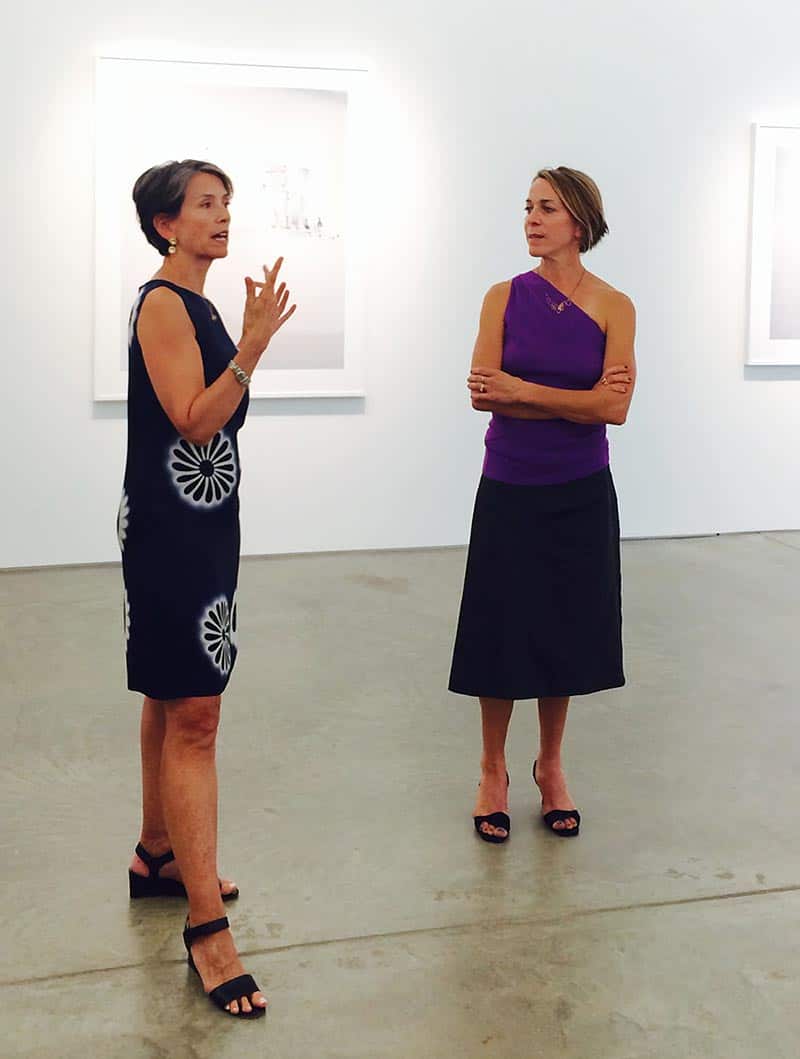 “I try to select artists whose work will make an interesting dialogue and will present the gallery’s program concisely,” says McKenzie. “Showing several works by just a few artists makes for a more meaningful experience for the viewer. I try to avoid showing work that has already been seen in exhibitions at the gallery. I want the material to feel fresh for the viewers. I may also consider highlighting the work of someone who may have been overlooked on a national level. I haven’t heard any grumblings thus far from anyone feeling left out.”

Reeves considers her artists almost like shareholders in the gallery. “We have a three-year agreement with artists about what we do for them, and what we expect of them,” she says. “A very clear part of the letter stresses that we are a collaborative team, and we’re trying to rotate through the roster as equitably as we can.”

“I stopped a long time ago trying to please artists with art-fair selections,” says one gallerist. “This is a very commercial venture.”

And local politics play a part. “There are serious collectors everywhere but the opportunity to connect with them depends on how savvy you are in putting forth artists who are tuned in to a demographic or to the geography,” Reeves adds. “You wouldn’t take a piece of figurative or religious artwork to the Middle East, for example.”

Artists need to bear in mind that the galleries are also under close scrutiny and are usually admitted on a juried basis.  “Even the little and medium-sized fairs have committees,” says Heller. “The committee will often look at the entire gallery program before they decide to accept you and sometimes they will tell you which artist they would like you to bring.”

The End of the Traditional Gallery?

Some have expressed fears that the proliferation of art fairs spells the demise of the time-honored show room, especially with overhead in neighborhoods like Chelsea entering the stratosphere. Because of the growing number of fairs, “some dealers have gone private,” says Dobrzynski. “They don’t need the walk-in traffic.”

“I’m thinking about whether I need to have such a big gallery space,” says Foster. “Maybe I should start leasing a smaller space, having fewer artists, and spending more time at art fairs.” 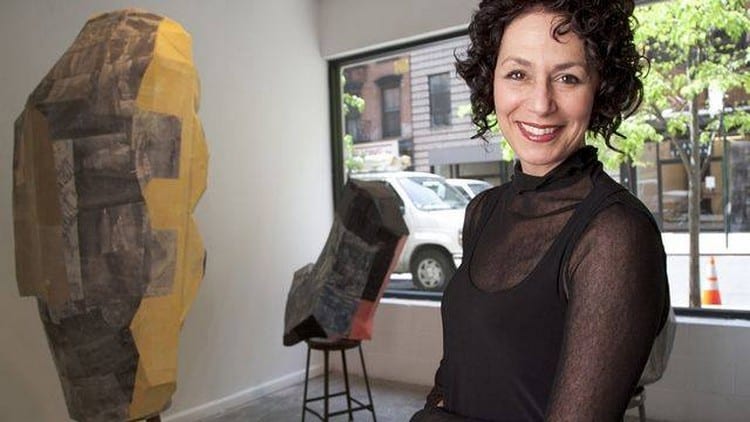 Lesley Heller believes part of her job is “to build artists’ careers.”

But if you’re spending all your time at fairs, “how are you serving the artist?” asks Lesley Heller. “Part of our job is to build artists’ careers by giving them exhibitions every few years to keep them part of the art dialogue.”

At this juncture it’s probably impossible to say how it will all shake out. Galleries could band together, one dealer suggests, and share a larger space at fairs. “The best of both worlds,” says McKenzie, “would be collectors who regularly visit galleries and make discoveries at art fairs, and then start a relationship with a gallery from there.”

Photo credits: Artist John Grade was a hit at the Seattle art fair. His Middlefork is on exhibition at the Renwick Gallery in Washington. D.C.