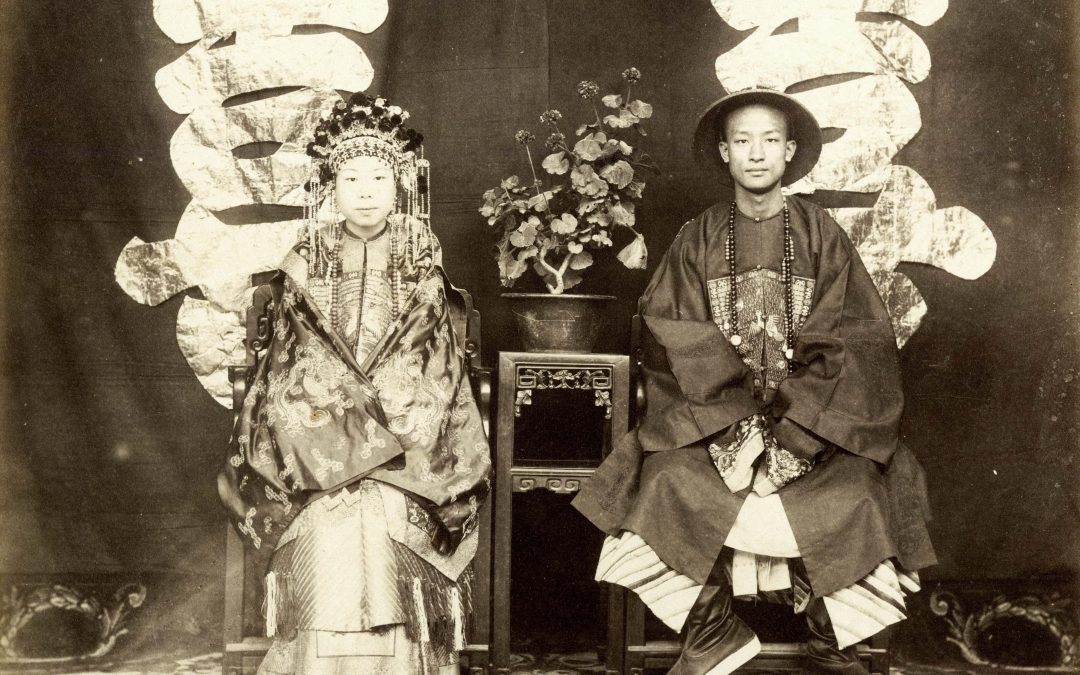 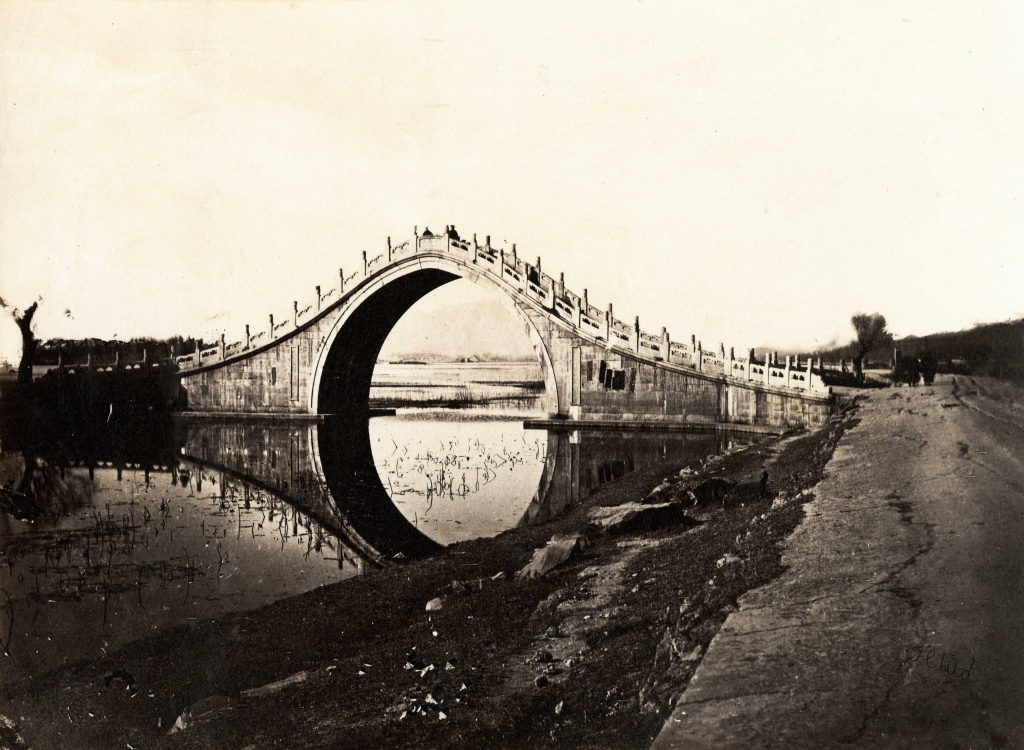 Her face framed by an ornate tasseled headdress, the bride looks eager and expectant and maybe a little scared. Her groom seems more confident, certainly more relaxed. You can imagine him tossing off those stiff ceremonial robes and heading out for a brisk walk. As seems obvious from their elaborate trappings, this is no ordinary portrait of an engaged couple. She is the daughter of the Marquis Zeng Goufan, an eminent high-ranking late Qing dynasty official who helped suppress the Taiping rebels and held administrative posts in the Chinese imperial court. The marriage must have been a happy one, as the couple, captured here in the 1870s, produced 13 children, and the family rose in importance in Shanghai into the 20th century. 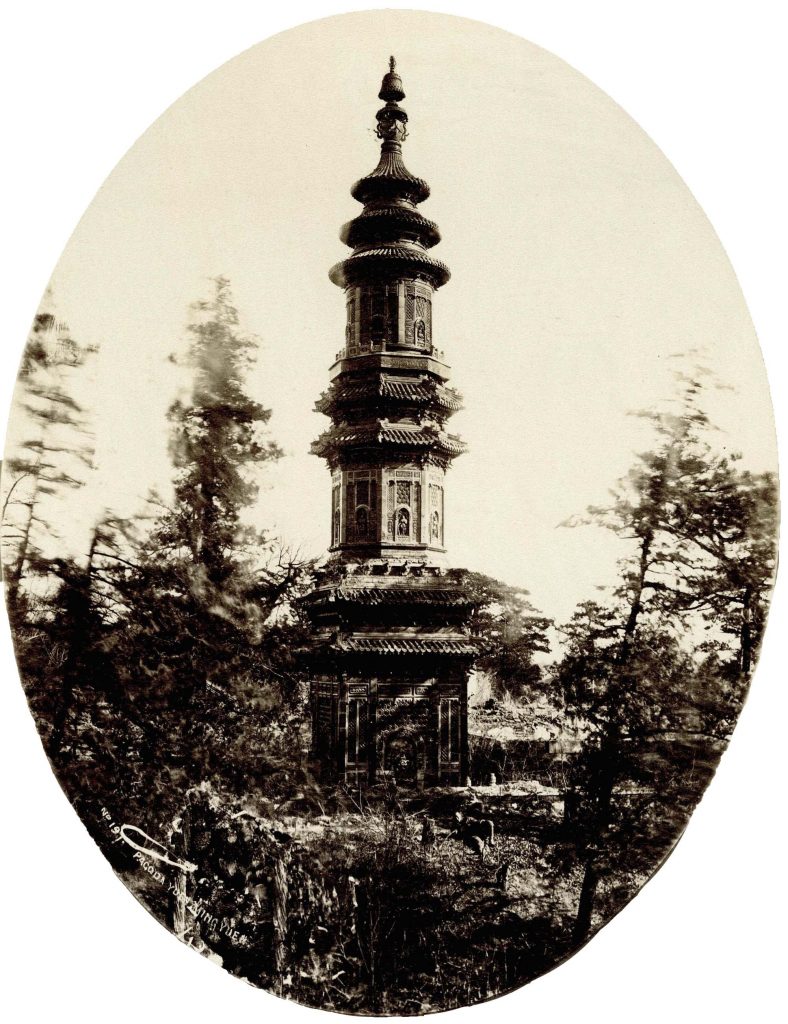 Child was fascinated by the variety and splendour of grand pagodas around Peking. This is a view of the Fragrant Hills Pagoda, which was part of the Grand Zongjing Monastery. The pagoda is embellished with glazed tiles of yellow, green, purple, and blue. Child praised the pagoda as ‘superior to anything of its kind round Peking’ and calls it a ‘gem of symmetry and grace’.

The Wedding Portrait of Zeng ji Fen and Nie ji Gui is an original 19th -century albumen silver print by Thomas Child, an enterprising young Englishman who was hired by the Imperial Maritime Customs service for the post of gas engineer in Peking (now Beijing) in 1870. He brought along all his camera equipment, and in his spare time put together the earliest comprehensive photographic record of Peking and its surroundings, then an exotic seldom-visited place for Westerners (and others). 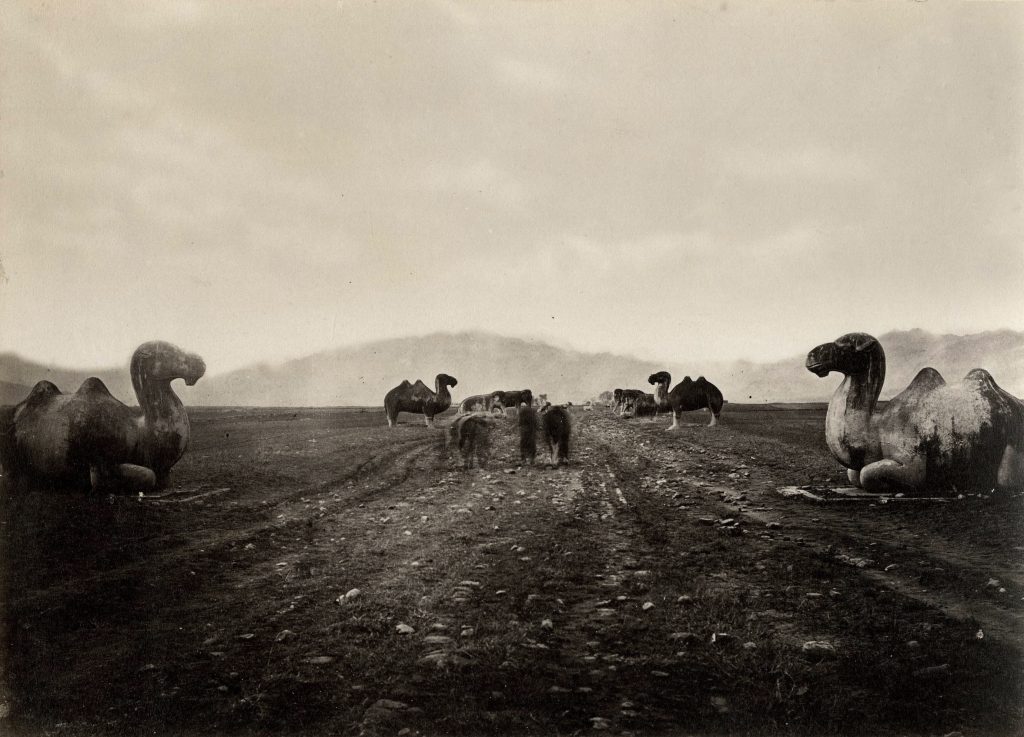 Camels along the Silk Road

Forty of Child’s prints from the Stephen Lowentheil Historical Photography of China Collection will be on exhibit at the Sydney Mishkin Gallery at Baruch College on East 22nd Street in New York from September 22 to October 25. Altogether Child took nearly 200 photographs of the ancient city, capturing the architecture and people in a country in the throes of change, as it evolved from ancient traditions into the industrial age.

“Child came over and learned Chinese while he was in China,” says Stacey Lambrow, curator of the Lowentheil collection. “He knew some of the history, and had a real interest in the environment. He became the resident photographer in Peking at that time.” He affixed printed labels with descriptive text on the backs of his photographs, and sold the works singly and in portfolios by advertising in Far East magazine and other publications of the day. These may have been the first glimpses many had of this ancient culture halfway around the world. 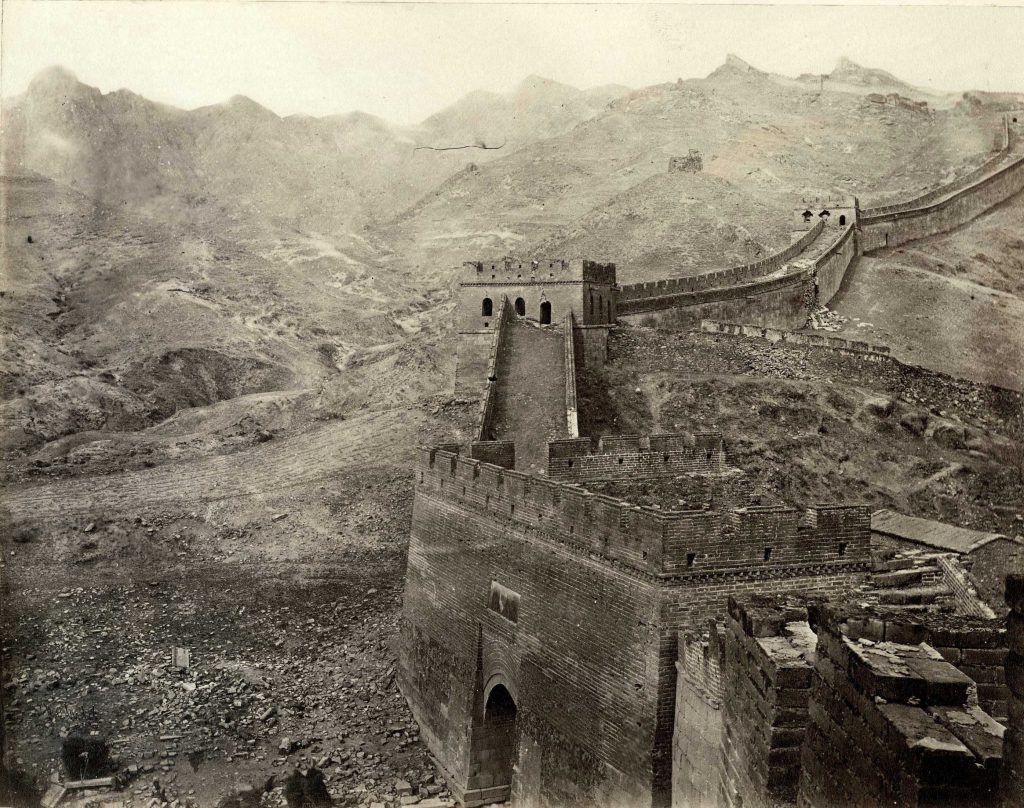 And they probably were not disappointed. Child offered scenes of the astonishing architecture of Peking in monuments like the Fragrant Hills Pagoda, part of a Buddhist monastery, or the Jade Belt Bridge, realized in a sophisticated composition that captures a semi-circular reflection and a handful of travelers. In a shot of the fabled Silk Road trade route, Child trained his lens on several patient Bactrian camels, sitting so still they look like immense stone statues. And of course, he made a memorable image of the endlessly snaking Great Wall of China

But it may have been the people of 19th-century China that fascinated, and continue to fascinate, the most. Like the Mongolian Lama, a kind of Buddhist monk, holding scrolls in his lap, looking a little dazed and startled at having his portrait taken. 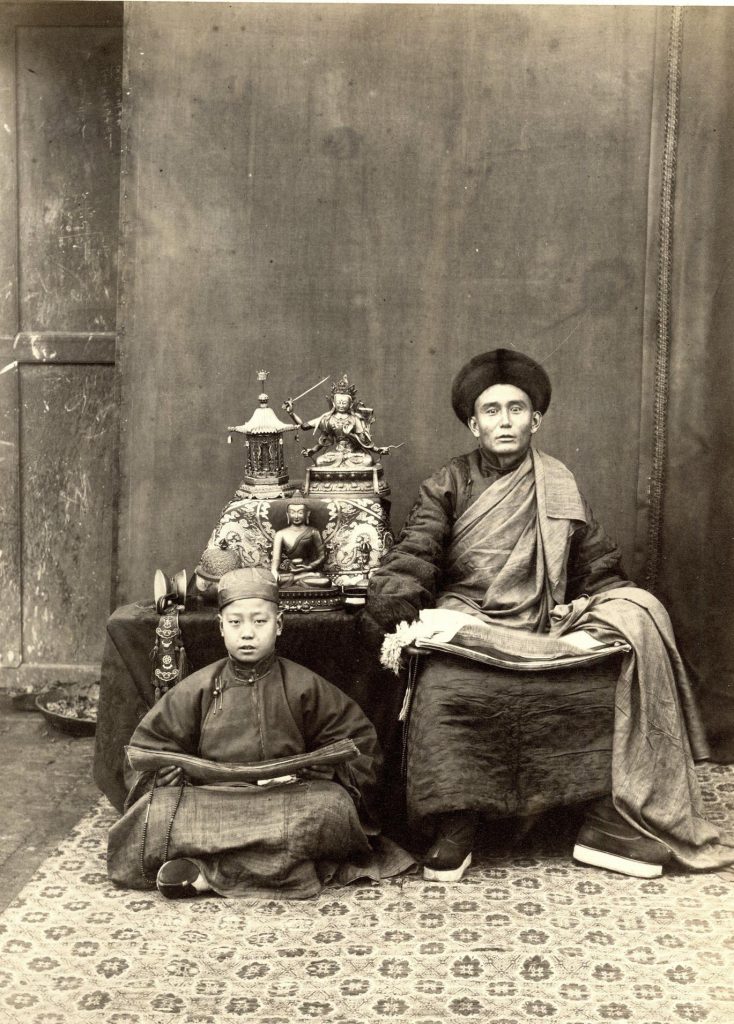 Traveling to make images of places and people was no easy feat for Child. “He used a big heavy camera, and a wet-plate Collodion process,” says Lambrow. “The camera weighed no less than 25 pounds, and he worked with a portable dark room, so the pictures were made right on the site.”

In a happy footnote to the show, when the exhibition opened in London nearly a year ago, one of the great-grandsons of the wedding couple recognized his ancestors from the BBC’s online website. “He just happened to be looking through,” says Lambrow, “and remembered visiting her when he was very young.” He said that his mother always brought her children to see Madame Nie Zeng Jifen, who had 72 grandchildren and 38 great grandchildren and lived to be 91. Raymond Watt, that descendant, and others whose roots go back to this large imperial clan will be on hand for the opening of the exhibition next Wednesday.

All images are albumen silver prints from the 1870s. At top is the Wedding Portrait of Zeng ji Fen and Nie ji Gui.