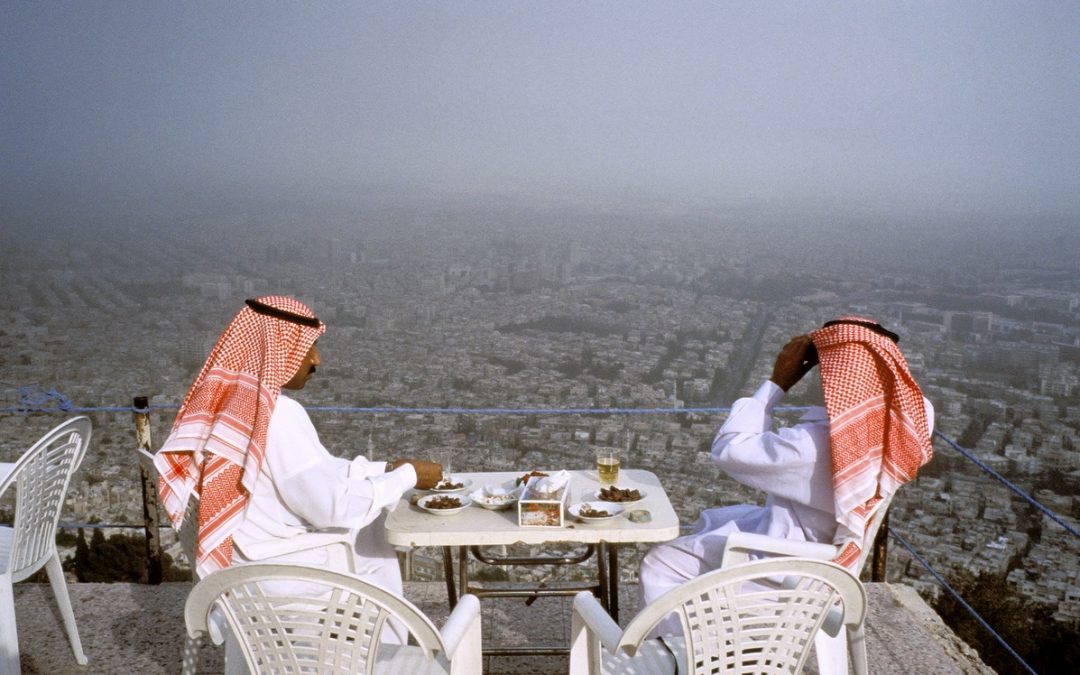 Reflections on a Famed Photojournalist’s Images of Syria 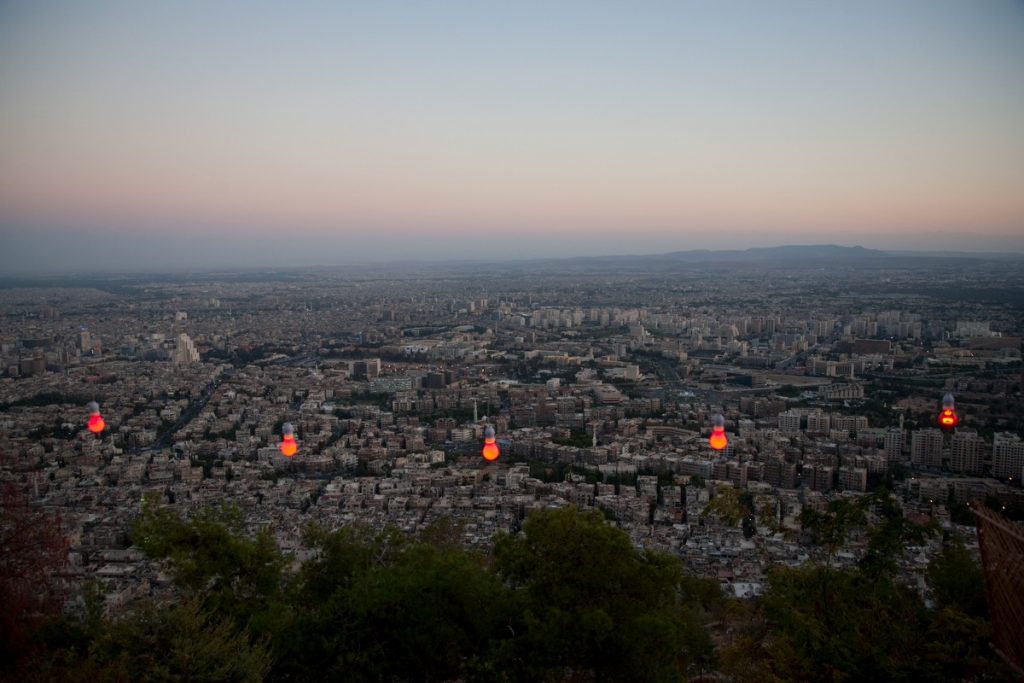 1 A View of Damascus from High Atop Mount Qassion

What I see first is beauty—saturated colors, an abstraction of forms in the picture plane, vertiginous compositions that plunge me from the immediacy of where I stand in the gallery into another realm. This is not the sheer ecstatic beauty of nature; it is the complicated beauty of humanity.  I am looking at “Syria Before the Storm,” a collection of images by photojournalist Ed Kashi taken between 1995 and 2009 on exhibit at Les Yeux du Monde gallery as part of the 2016 Look3 Festival of the Photograph in Charlottesville. VA.

#1 In the foreground, five small round red forms create in a gentle arc that floats above a lacy spill of black-green. In the background, a geometric field of grey textures unfolds. Above, it is blue and thin except for the opaque bands of color at the horizon where the land rises in minerals and dust to meet the falling sky.

#2 A black linear form that fills the foreground rapidly penetrates an ochre field, ending—not disappearing—before it reaches the wall of cloud-dappled mountains and the wedge of blue sky. 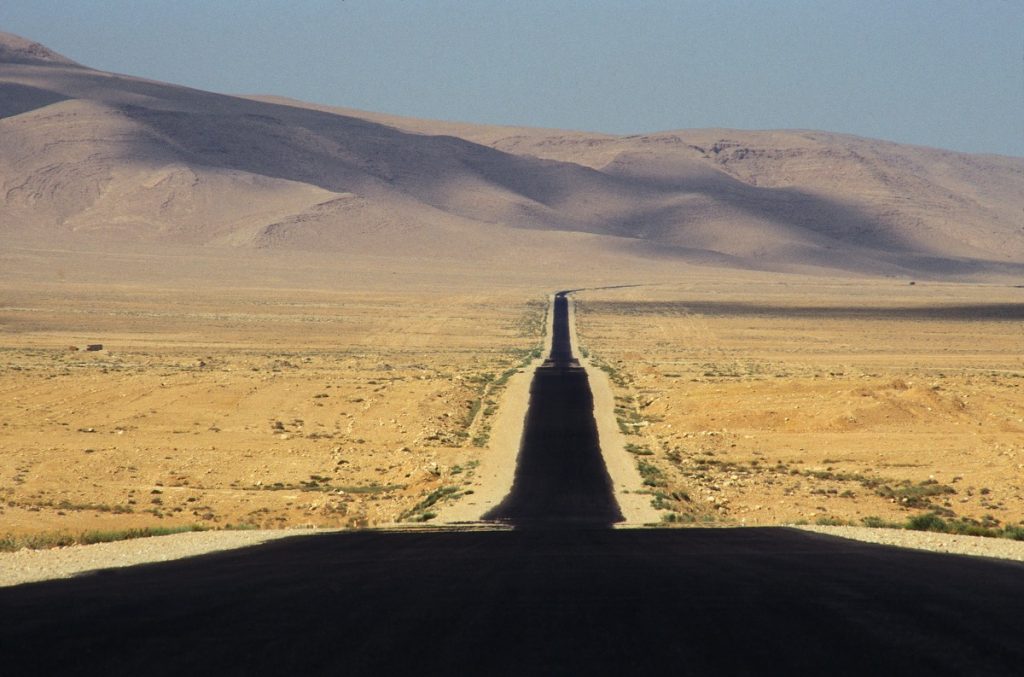 2 Road from Damascus to Palmyra

#3 The picture plane is bisected horizontally. In the lower half,  four nippled domes, the color of wheat and mud, cap a rectangle of traditional architecture. In the upper half, blue washed with flows of white. In the negative spaces of the breasted building, stick figures of children play in silhouette.

#4 In a moment of light among filigreed shadows on a cobbled street, a dark striding figure is interrupted by the small white form of the shopping bag she is carrying. The tree trunk in the foreground watches, echoing her form. 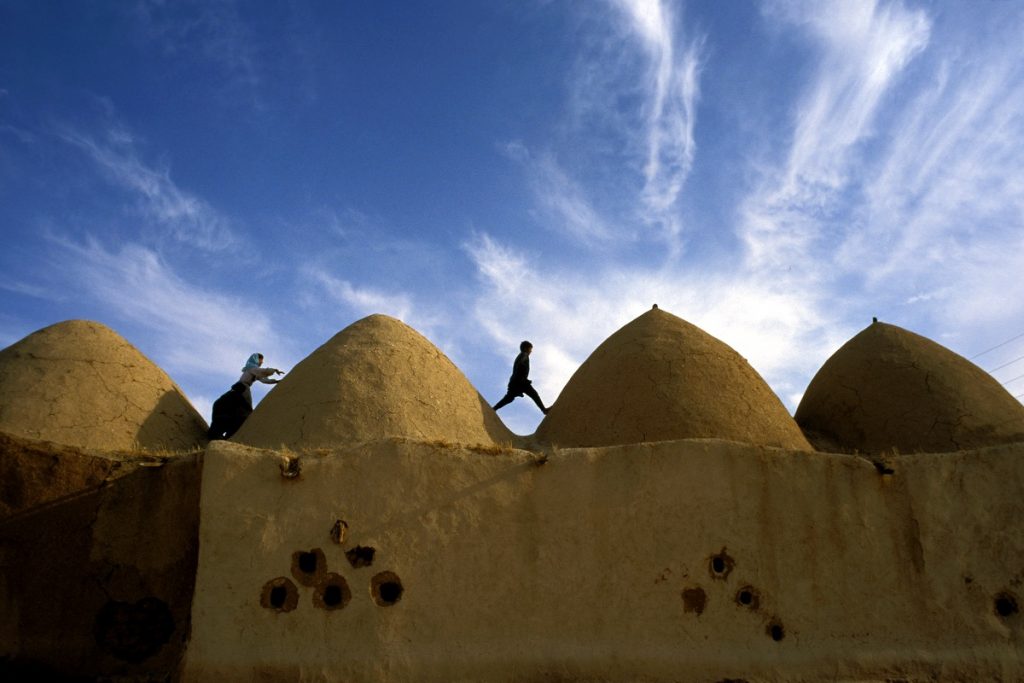 3 Children Playing among the Domed Roofs of Am Al Aboud

#5 Four straight parallel lines of shadow plunge into the picture plane of ochre from where I am standing in the gallery. Beyond the lines, the shapes are reiterated in the naked vertical columns of ancient Palmyra. Beyond the ruins, only sky—no horizon, just infinity. In the exact center, two tourists, their backs to me, gaze into the future and the past, too.

As visually mesmerizing as the images are, there is another force that arrests me: the knowledge that most of what I am seeing no longer exists—the field of cotton, the bowl of dates, the street in Aleppo, the donkey, the Bedouin boy, his blue slippers, obliterated. I feel the weight of our living history gathering in my chest. It is made even more potent by the exact absence of the depiction of war and its devastation. Yet the beauty holds my gaze, and keeps me from turning away. 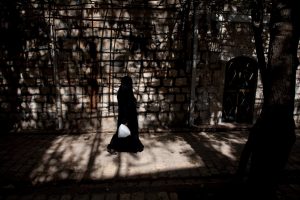 This paradox grabs me and troubles me. From a different perspective, I re-examine the experience of looking at images of things that no longer exist through the medium of the photograph by re-reading Susan Sontag’s essay “Looking at War” and her ruminations in On Photography. I also read James Hillman “The Practice of Beauty” and revisit the perpetual Big Questions I ask myself …for example, what is my role as artist-citizen in this world now? The rural Piedmont landscape where I live and work are generous in giving me the beauty and metaphors of the natural world that are restorative. Yet the Anthropocene is where I live too, filled with wars, dissolving ice, vanishing species, and poisoned habitats.

In my studio, yellowed and pinned to the walls among the poems and butterfly wings are newspaper clippings and photographs: laundry hangs between the exposed bones of the bombed building; the man puts his ballot, clasped between the two stumps of his wrists, in a box in Rwanda; the Spanish soldier warms the refugee lying in the sand with his own body; caked in white powder, the Syrian woman is like a marble statue but a rivulet of red runs from beneath her headscarf. None of this I depict in my work, yet it is within me and around me–mine to assimilate, transform, and offer back to the viewer in a way so that she will not turn away. 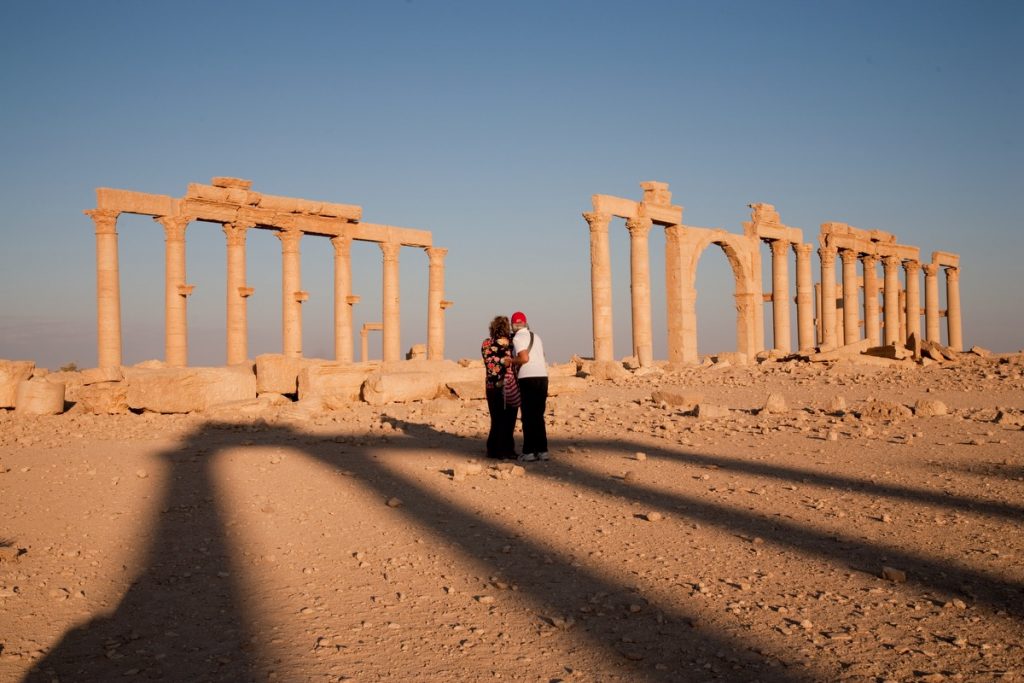 Millicent Young is a roving correspondent for Vasari21 and an artist who lives in Ruckersville, VA. Her work will be featured “Under the Radar” soon. More about photographer Ed Kashi can be found at edkashi.com.