For Jonathan Morse, digital prints are every bit as original as statements as a painting or drawing realized through traditional means. Yet his works, mostly abstractions made in their entirety on the computer, incorporate many of the elements familiar to contemporary art—collage, bold calligraphy, random splashes and splatters of paint, and even passages of Richter-like realism. As one of his gallery statements notes, “This is computer art with a human hand embedded in its heart.”

Morse came to this state-of-the-art, 21st-century version of printmaking through the not-so-distant back door of photography, which ultimately comes to the viewer also as an image made via a machine. As a high-school student in Bedford, NY, he taught himself photography at a small local club and remembers being fascinated by the tonalities of masters like Edward Weston, Ansel Adams, and Aaron Siskind. After graduating from Yale, where he was an English major, he returned to photography during an interlude in North Carolina, where he “bought a cheap tiny camera” and became enamored of the medium all over again.

In time, he moved north again and got an MFA in photography in Rochester, NY, through the State University in Buffalo. “But the classes were in Rochester, in an old factory building devoted to all things photographic,” he says. An artist named Syl Labrot, a pioneer in abstract color photography, came up from New York to “teach photo silkscreen and that really drew my attention to color,” Morse recalls. “What I learned from him was the idea of building a picture instead of taking a picture,” he recalls. “The whole time I was in Rochester I was becoming a photo printmaker in a very experimental way.”

Then came law school at Boston College, in the interests of always having a fallback career, but the camera remained a compelling sideline. A Massachusetts Art and Humanities Foundation grant allowed him to noodle further with photography and printmaking. Students and faculty at MIT, where he had a part-time job, were “working in the early stages of digital, and because I didn’t have any equipment I was processing Cibachrome in a makeshift bathroom setting.”

During these years, Morse first encountered works by Robert Rauschenberg in a group show in New York. “I was floored by the way he combines photography and drawing,” he remembers. “His work has been an inspiration for me ever since.”

For the last three decades, Morse has called Santa Fe home because it is “the sort of place where you can wear many hats.” His studio space is also his law office, and is as spic-and-span as an upscale gallery—which it is, in a way, for his own prints, which are framed in pristine white wood and elegantly arrayed throughout the room.

The artist says his process occurs both rapidly and through slow and painstaking stages—which is not entirely an oxymoron. “My actions are quick, intuitive, and responsive to the emerging and shifting image before me,” he says. “I work without a deliberate plan and, in the moment, pounce from step to step. That said, I work long and hard, constantly proofing, since it is ultimately about ink on paper and not about pixels onscreen as the image grows and takes shape.” 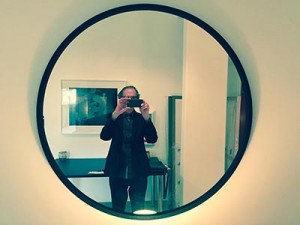 Jonathan Morse takes a selfie in his Santa Fe studio. More can be found at jmorseart.com.