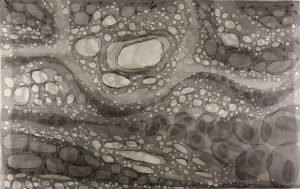 Though she is often categorized as a fiber artist, Jodi Colella works with all manner of materials that extend the boundaries of what we think of as sculpture. These have included aluminum screening, found driftwood and gnarly twigs, plastic sleeves for newspapers, carded wool, and stuffed toys used as promotions for Victoria’s Secret. But for Colella it all started with that most basic of traditionally female crafts: knitting. “As a kid my family spent summers at a beach house owned by my grandparents on Cape Cod,” recalls the artist, who now lives in Somerville, MA, just north of Boston. “We were all interested in handicrafts. We’d swim and snorkel and then we would sit on the beach and knit. I remember learning to knit at five—my mother and aunt and grandmother taught me.” 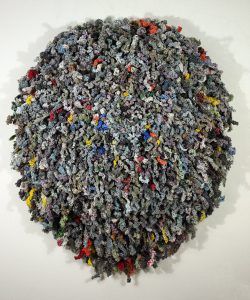 One Day (2010), repurposed plastic bags from delivered newspapers that were stripped, hand spun and crocheted, 48 by 43 inches

It was in high school that Colella first developed an interest in art and discovered a teacher who encouraged her efforts, lending her books to read and assigning special projects to work on. “I didn’t have a budget for expensive art supplies and would always sheepishly hand in assignments using what I could scavenge from my environment, worried that they wouldn’t meet the task,” she told an interviewer on the occasion of the 2009 World of Threads Festival. The teacher’s “positive reactions,” she says, “validated my approach.” Not surprisingly, her favorite artist at the time was the shape-shifting and endlessly versatile Picasso. “I loved his ability to deconstruct into the simplest and most essential elements for his compositions.”

But a parallel interest in science and a scholarship to Boston University led Colella to a degree in biology, and the art career went on hold for nearly two decades. She found a job in a lab in the medical district across the street from the Massachusetts College of Art and Design, where she took courses in graphic design. Then for 16 years she had her own business, doing brochures, logos, and other elements of corporate design.  “Graphic design taught me about color and composition and material in a very practical way,” she says. “I love print media and in the early part of my design career we would create handmade comprehensives for clients, another very crafted and tactile approach that I carry over into my work.” Around 2000, however, she decided to take a one-year sabbatical and plunge into the life of an artist. As she cheerfully notes, “I never looked back.” 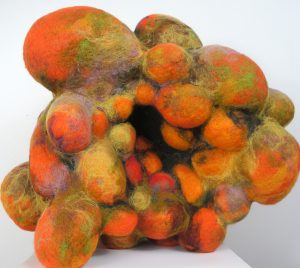 Colella first turned to traditional mediums—drawing, painting, and printmaking—and landed a show of paintings at the Danforth Museum in Framingham, MA. “I was feeling drained after that and said, I think I’ll go back to my comfort zone for a while,” she says. “I realized that fiber and fabrics were what most interested me. My first was called Bittersweet and it incorporated bittersweet vines and assorted fibers that were woven, crocheted, knitted, and sometimes just stranded throughout.” 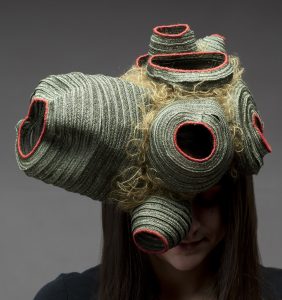 Almost from the beginning, her works showed an interest—again, not surprisingly—in shapes and structures informed by science. Exaggerated cellular forms acted “as metaphors for the human condition in its most primitive state. I’m entranced with the patterns of everything from capillaries to bacteria to tree trunks.” Works from this time, made from driftwood and felted wool, seem to be sprouting bulbous fungi from their supports, and the nine-foot-long Undercurrent, patched and sewn from aluminum screening, could be an outsized outtake from cells examined under a microscope. “When you look at it from far away, it’s like organza,” she says, “but up close it’s rather frightening.”

Her next project turned into a collaborative venture called “One Day.” After making a piece from the plastic sleeves of newspapers, which she spun like thread on a spinning wheel, she realized she couldn’t collect enough newspaper sleeves for a larger work, and appealed to her community of friends and supporters. “They would just show up on my doorstep,” she recalls. “Before people even said hello, they would shove a bunch of bags in my hands.” In the years since, Colella has spearheaded other collaborations, an outgrowth of her work as a teacher both in private workshops and local schools, such as a weaving event at Wheaton College, and one called “Own Your Piece/Peace” with Needham High School students. 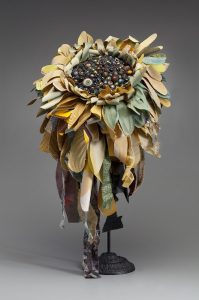 Colella has had a lifelong interest in folk cultures and indigenous art, fascinations reinforced by residencies in Thailand and in China, near Shenzhen, where she found herself four years ago, living in a mountain village among both farmers and artists. “It was a tropical climate of extreme rural poverty combined with the riches of the nearby manufacturing capital,” she writes on her website. “I learned to live with all sorts of differences.” The experiences in China, where she came across objects that served as “power figures” for the local populace, provided the genesis for what she calls her “Beastiary,” in which stuffed toys—“laden with projections”—became the basis for new and often terrifying creatures. They are, as one critic noted when they were shown in 2016, “cuddly critters with a dark side.”

The often-scary hybrids of the Beastiary took a decidedly feminist turn when she discovered some stuffed animals used as promotions by Victoria’s Secret. “I stumbled into a whole culture of young teens collecting these in a very cultlike way,” she recalls. “These little toys were drawing kids into a culture of how women should behave. I saw it as deliberate—a tool to attract the attention of a new market.”

The feminist impulse continued in a project called “Unidentified Woman,” inspired by a collection of daguerreotypes in the vast archives of the Historic Northampton Museum in Northampton, MA. The artist was working on a series of fanciful headwear, also jump-started by the museum’s holdings, when she stumbled on the portraits. “They were like little 19th-century selfies,” she says. “I noticed that all the men in the photos had every single detail of their life listed in the catalog. About 80 percent of the women were labeled ‘unidentified.’” After hunting down similar portraits in flea markets and antique shops, Colella stitched intricate embroideries across the images, further obscuring the women’s identities. That body of work is currently on display at Form & Concept Gallery in Santa Fe, NM, through March 17. 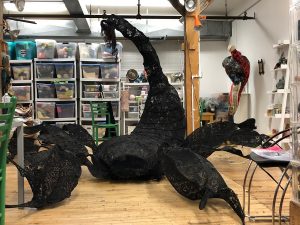 Stinger in progress in the studio (2018)

Embroidery forms the basis for another show, called “Loom Large,” which opens the end of this month at Boston Sculptors Gallery (February 28-April 1), Again, a residency was provided the stimulus: while spending five weeks in a traditional mud house in Thailand, the artist encountered a black scorpion in the bathroom sink. “Colella processed her fear of these arachnids by stitching together her first scorpion—a transitional object, a talisman, a meditation,” says the press release for the show. Back home, though, she created a second larger-than-life version, with a lacy exoskeleton crafted from found doilies. 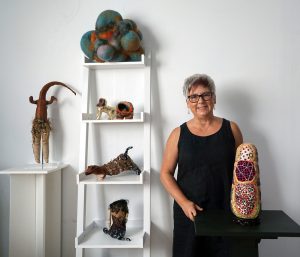 Citing a renewed interest in artists like Lenore Tawney and Ruth Asawa, Colella sees a hopeful future for fiber art in all its manifestations. It’s a way of working that “provides a respite from the impersonal and detached environments of contemporary society,” she has remarked. “Our need to stay connected with the use of email and instant messaging is the exact thing that keeps us isolated and alone. Fiber arts are tactile and engage our senses in an active say, inviting viewers to feel.”