Into the Woods with Dale Chihuly 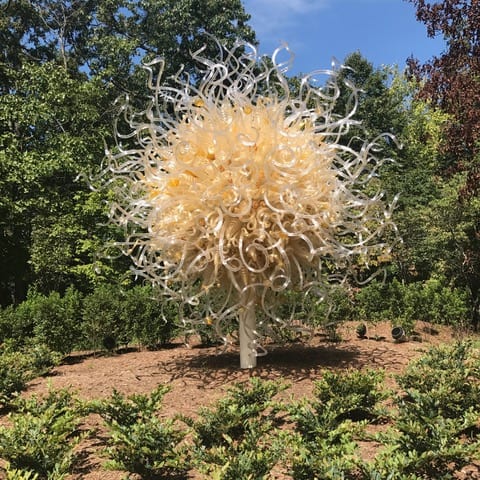 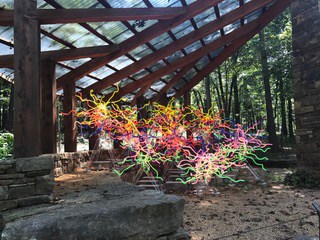 I arrived at Crystal Bridges in Bentonville, Arkansas—Walmart heiress Alice Walton’s inspired gift to flyover country—too late to see the Dale Chihuly exhibition in the gallery itself but in time to visit the “In the Forest” portion situated in a section of the verdant wooded grounds. Already heady from the sight of deciduous trees, ferns and pastel wildflowers (balm to my desert-parched New Mexican eyes), I trekked up a winding path behind the trilobite-shaped modules of Moshe Safdie’s architectural marvel and came upon the first piece: Boathouse 7 Neon.  And stopped dead, mouth agape.  It’s a wild tangle of multi-colored neon tubes, glowing with electric energy.  Literally.  A “High Voltage” warning sign stifled any urge to get up close and personal. 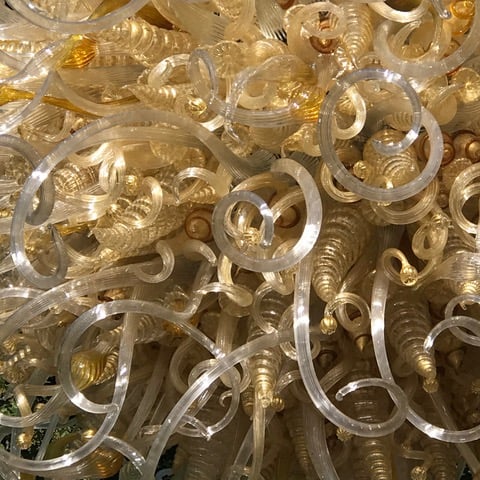 Yes, I think, clearly the work of an artist in a manic phase.  I had just read “Who is Really Making ‘Chihuly Art’” in The New York Times, so I was aware of the artist’s struggle with bipolar disorder and of his inability to work when depressed.  But this piece, part of his “Tumbleweed” series, isn’t chaotically manic; it’s a controlled explosion, delightful in its exuberance.  The placement, under the translucent roof of an open-sided pedestrian shelter, is coincidentally appropriate to the title of the piece, which in fact refers to Chihuly’s “Boathouse” studio in Seattle. It also creates the impression that some of the protruding tendrils just might break free of the intertwined serpentine mass and escape into the surrounding woods. 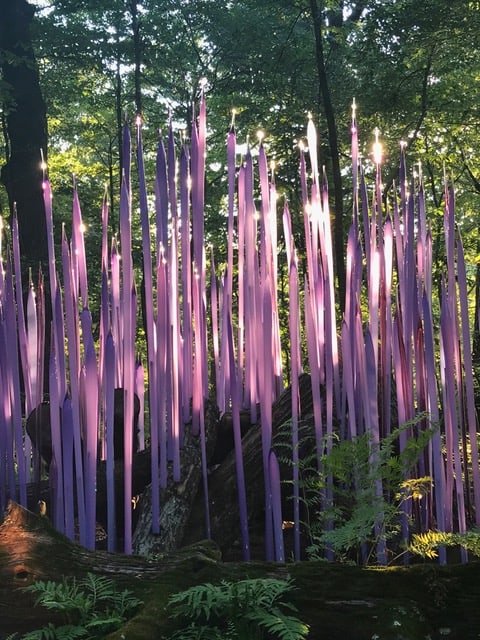 Not all the works in the forest are this frenetic.  The second one along the path also bristles with energy but in a more contained spherical form.  Entitled Sole d’Oro, it calls to mind an alien but friendly sun, a sun with a sense of humor, harboring feminine shell-like forms at its core while emitting masculine cylindrical flares from its surface. The piece’s solarity, if there is such a word, is enhanced by its setting,  always critical for outdoor sculptures.  Elevated well above the ground on a pole in a clearing, this shimmering sun appears to float in space, radiating light in all directions. It was a particularly meaningful visual treat for me as I’d just experienced the total disappearance of our actual sun from a prime vantage point east of Kansas City.

However, my favorite piece, even if born of a bipolar high, was the essence of serenity.  Neodymium Reeds on Logs consists of tapering lavender tubes of glass rising out of fallen tree trunks like exotic forest flowers seeking the light. The rustic solidity of the log base contrasts with the delicacy of the reeds that appear to grow out of them while the tips of the reeds catch the sunlight and sparkle like dewdrops. The overall effect is both tranquil and mesmerizing.  (Note for the scientifically challenged: neodymium is a chemical element that can be used as a glass dye.) 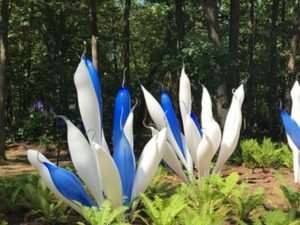 The Belugas, a cluster of plump, vaguely whale-like forms in blue and white (a shape that Chihuly particularly favors) came next along the path, breeching from vaguely marine-like low-growing ferns. They were followed by Red Reeds, a collection of scarlet tubes stacked against horizontal supports, blazing against the green vegetation, lean-to shelters for fairie folke.

Then near the trail’s end, a surprise: a pale orange-and-tan mass of fat blown-glass gourds stuck high in a tree like a fungus on steroids. This piece, Squero Di San Trovaso Chandelier, dates from a 1996 collaboration with master glass blowers in Finland. In the present installation a second chandelier, the Campiello Barbaro, snuggles at the base of the tree like a heap of gigantic Christmas ornaments.  The metallic blue and green globes of the latter chandelier are the product of another collaboration in 1996,  this one with the glassblowers of Vitrocrisa, a commercial glassware factory in Monterrey, Mexico. 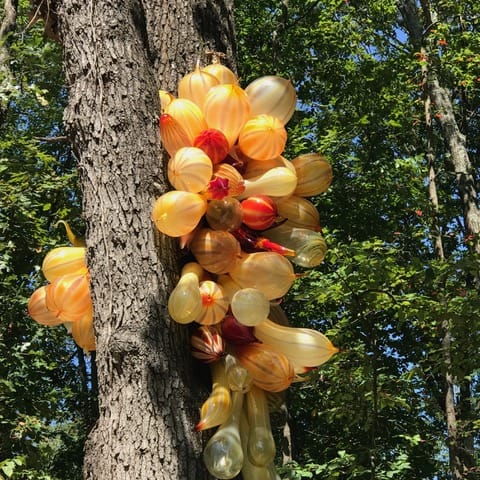 The penultimate piece in the forest is strategically placed at a downhill curve in the winding path so that one might come upon it abruptly from above. And it’s a knock-out:  a crowd of wildly variegated glass shapes in highly saturated colors stuffed into a shallow wooden boat, appendages waving in all directions.  It looks like an overcrowded boatload of refugees from a disaster in Murano.

Now I don’t know if my biomorphic reactions to Chihuly’s work are aesthetically correct—I’m an anthropologist, not an art critic—but these particular pieces invite emotional involvement.  I don’t think all glass art does that.  Much that I’ve seen inspires lofty intellectual contemplation rather than flights of fancy.  But Chihuly, possibly because bipolarity produces labile and intensified moods, has imbued his creations with wit and feeling as well as exquisite form and color.  They strike me as the products of a man with an overwhelmingly positive attitude, as exemplified by the his statement:  “I don’t think much about the past. I think more about the future. I prefer to be thinking about what I want to be doing tomorrow.” 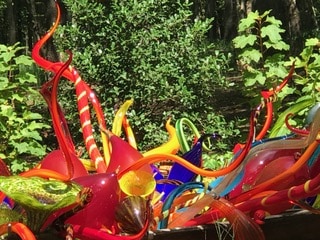 “Chihuly in the Forest “ runs through November 13 at Crystal Bridges Museum of AmerIcan Art in Bentonville AR.

Susan Erlandson Washburn  is a writer currently living in Taos, NM.  Her most recent book, My Horse, My Self: Life Lessons from Taos Horsewomen  (Casa de Snapdragon: 2015) won a New Mexico/Arizona Book Association award. She has just completed a novel, “Gone Astray,” about a widowed English professor who suffers a midlife crisis when her adolescent daughter becomes an evangelical Christian.