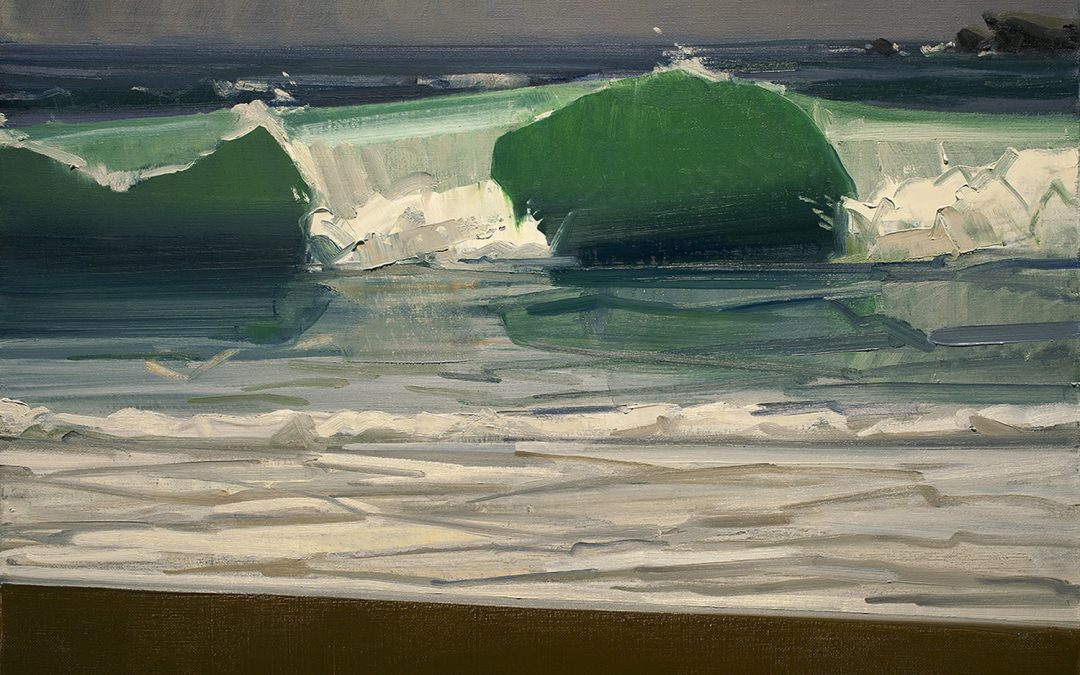 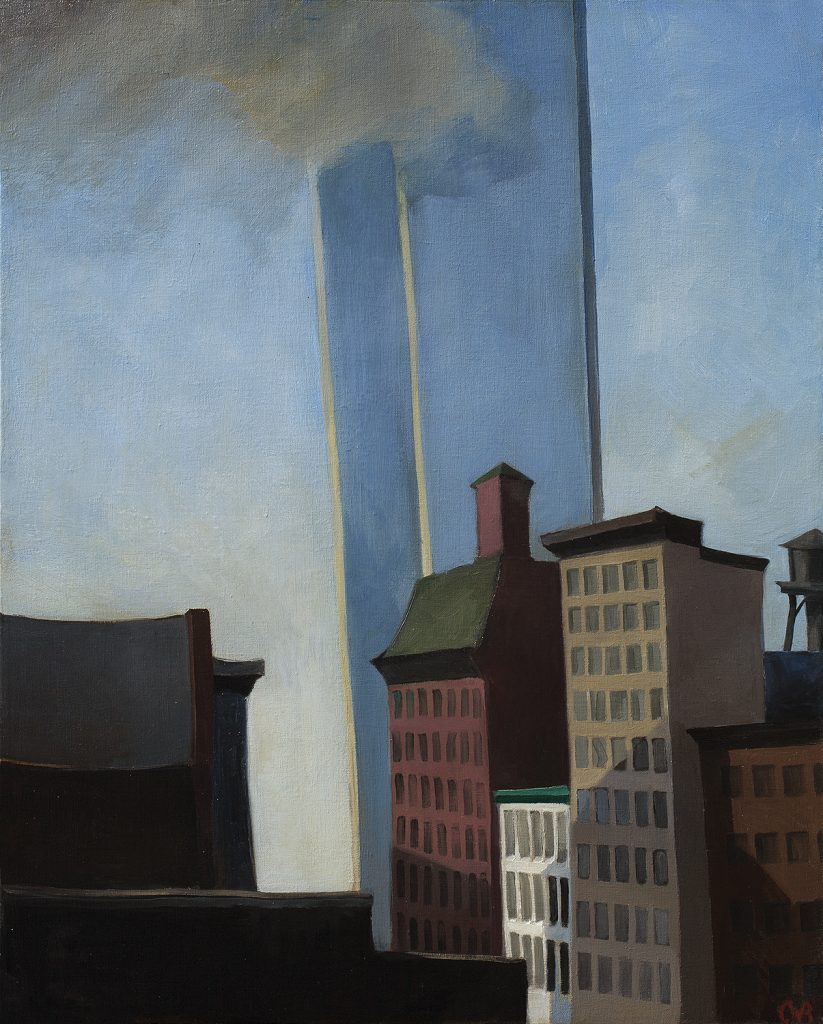 From a remarkably young age, Christopher Benson knew that he wanted to paint and, more pointedly, that he wanted to paint within the hallowed traditions of realism. There was no shortage of encouragement on the home front: He spent most of his childhood in Newport, RI, surrounded by a family of artists and artisans. “You never had to think about doing art. It was everywhere, all around,” he says. His grandfather was a watercolorist and illustrator in the 1920s who eventually established a prosperous business doing the lettering for gravestones, an occupation his father inherited (he carved the tombstone for John F. Kennedy at Arlington National Cemetery). His uncles were both artists and teachers, and as a child Benson took art classes and later studied at a progressive private school in Vermont, where he lucked into classes with Peter Devine, whom he describes in his forthcoming, profusely illustrated memoir as a “thorough instructor who quickly weeded out a group of stoners looking for easy credits, leaving a core of four or five genuinely dedicated art students.”

In his teenage years, he also discovered Goya and Turner, the latter influence continuing to this day as a source of inspiration and aspiration. When he entered the Rhode Island School of Design—where both his father had studied and his grandfather had taught—Benson was determined to learn the skills necessary to make “competent paintings” that might eventually open the door to a “greater mastery and a freer voice later in life.” 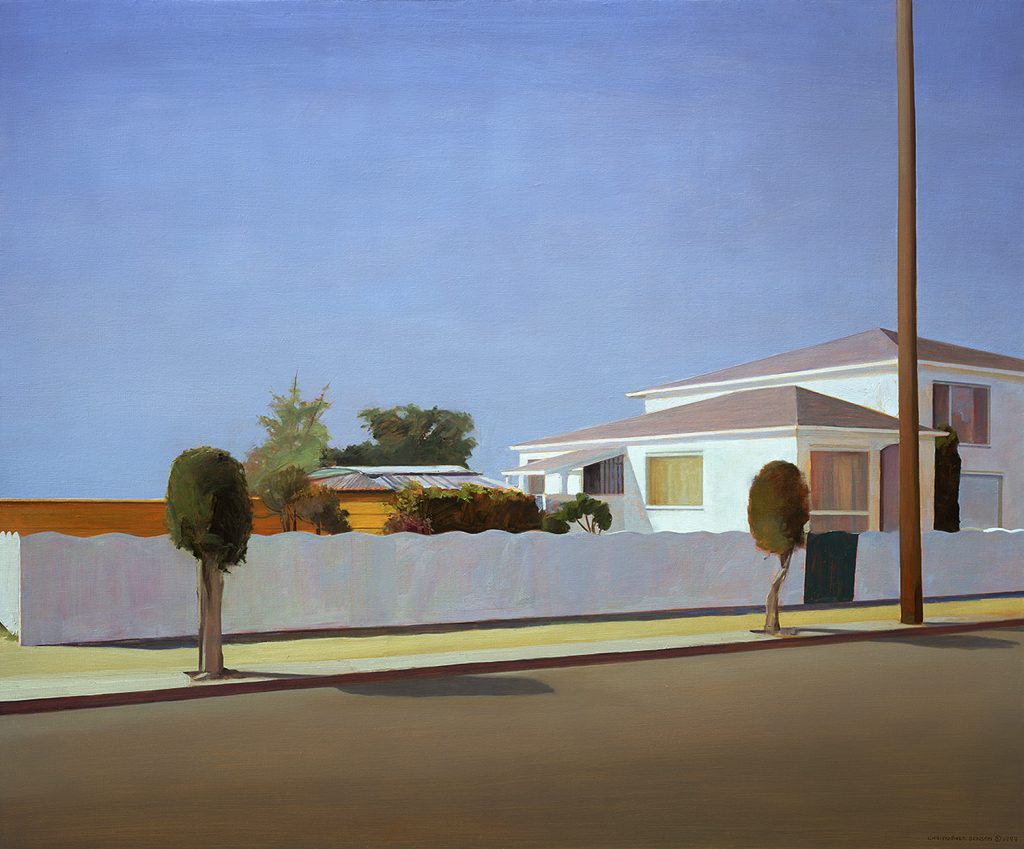 His academic plans were thwarted by the arrival in his sophomore year of a conceptually oriented artist named Alan Hacklin from Cal Arts, who aimed to make the program “more buzzy and New York oriented,” as Benson puts it. Hacklin was dismissive of the young student’s efforts and the two locked horns over a painting of a tugboat that still hangs in Benson’s studio. The teacher refused to exhibit the work in the annual painting department exhibition in the college gallery, saying it wasn’t “worth the space it takes up.” Benson finished his junior year, but dropped out and went home to Newport for the summer.

After a few months in Rhode Island, he moved to New York City and rented a studio on the Brooklyn waterfront. “Every week I went to the galleries and museums in Manhattan and looked at art,” he recalls. “Then I’d go back to my studio and paint.” He checked out contemporary figurative painters like David Salle and Eric Fischl, but gravitated more to earlier American realists and regionalists like Edward Hopper, Grant Wood, and Charles Burchfield. He describes his Burchfield-influenced cityscapes from that time as “playful and cartoony, as if the buildings were alive and breathing.” 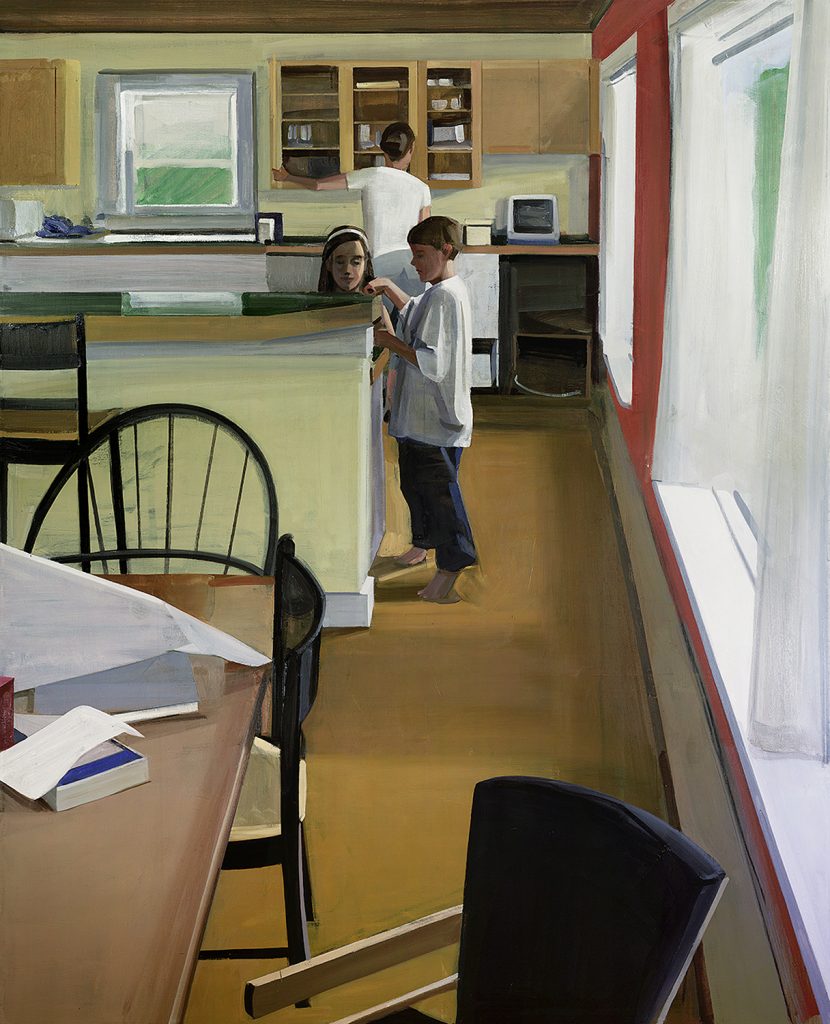 When he was 25 he returned to Newport, where he lived for about year, building cabinets—a trade he had learned that would support him through future lean years—until deciding, almost on a whim, to move to the Southwest. From his first show in Rhode Island, he had already attracted a group of collectors who advanced the money that allowed him to travel around New Mexico. “My paintings were cool in tone, a little stark and remote,” he says. “I was trying to make pictures that weren’t like what everyone else was doing.” But it was the drawings he was making in his Santa Fe studio that most interested Arlene LewAllen, owner of the gallery by the same name, which still exhibits his work 30 years later. “If you can make some paintings as good as these, I’ll show them.”

In spite of that early success, Benson’s life for the next few years remained nomadic. He traveled to California and encountered the girl who would later become his wife. In spite of a ten-year age difference, the two were almost instant soulmates. Both had grown up with single divorced parents and both wanted to try for something more long-lasting. Through their early years together they lived on both the East and West coasts, with a sojourn in Santa Fe, where Benson acquired another skill that still serves him to this day, as a designer of handsome books, mostly of photography. (He has also supported himself with accomplished portrait commissions, which he claims he tends to feel a bit embarrassed by, though he admits that “they at least taught me a lot about how to paint.”) 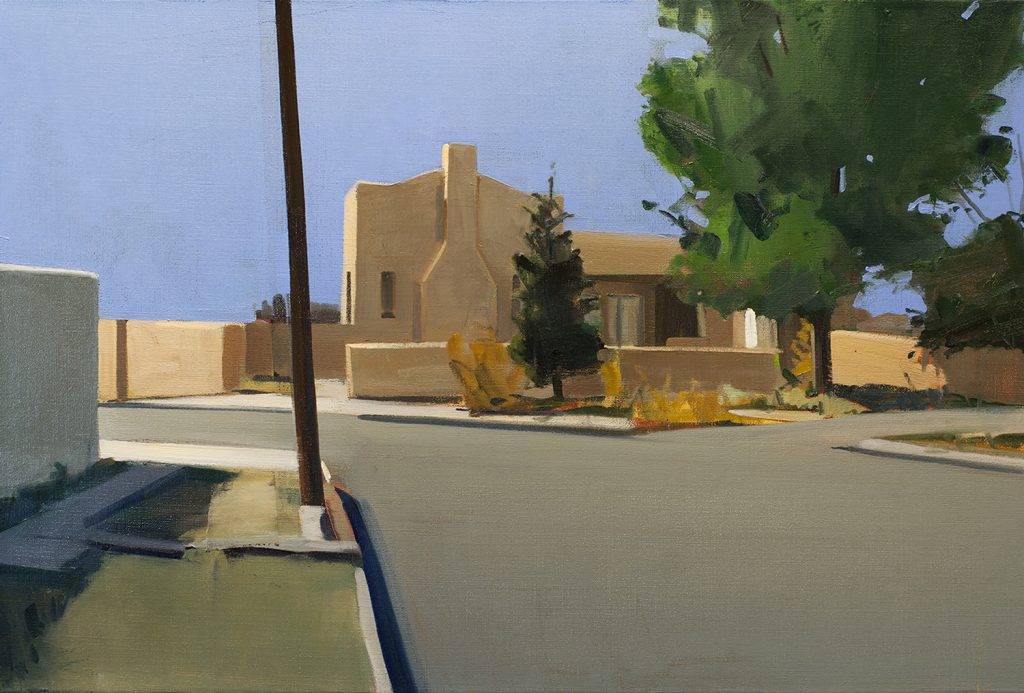 Living in Berkeley in the ‘90s, Benson settled into a style that is recognizably his. “I paint mostly homely scenes—familiar neighborhoods and interiors peopled by family members, relatives or friends,” he has written. “There is no explicit emotional narrative disclosed in these pictures…but fleeting images, seen passively, as if in a mirror or a candid photograph taken while our ordinary, uneventful lives unfold.” 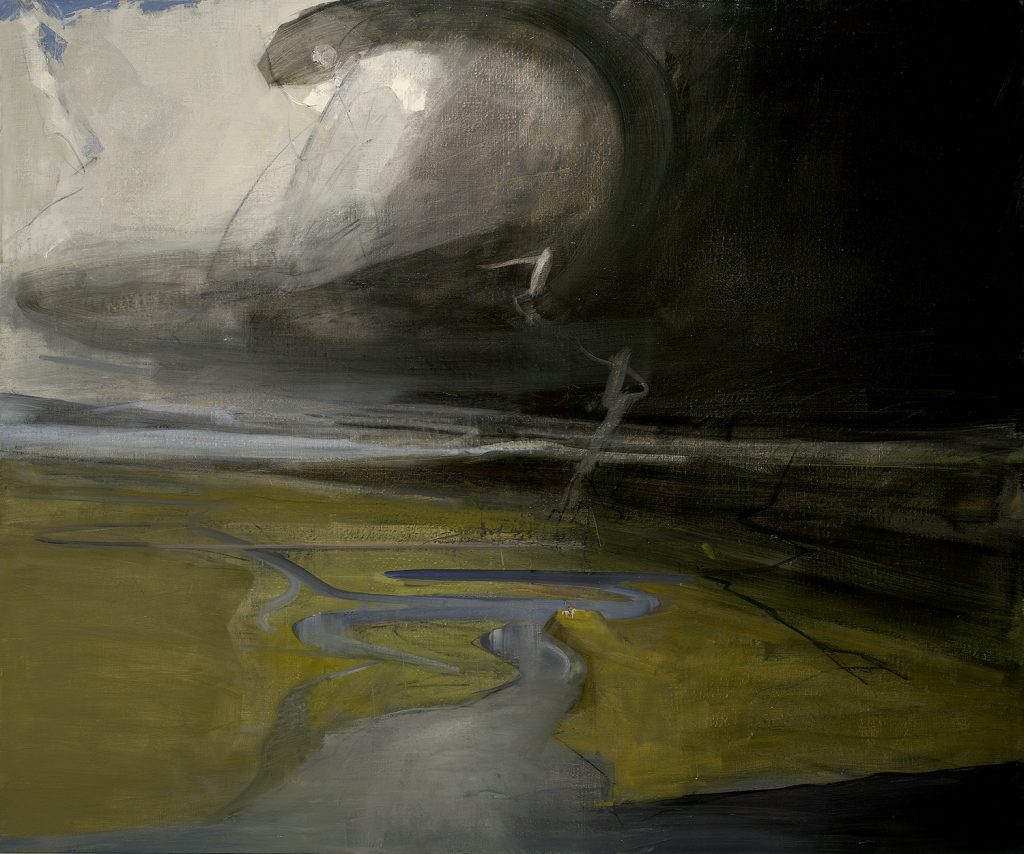 Standing Rock, Coming of the Black Snake (2016), oil on linen

For the last decade, Benson and his wife, Cybele, a schoolteacher, have been leading a prosaic domestic life in Santa Fe, raising two sons, now in their teens. But the artist has made some interesting detours in his path as a painter. In his mid-forties, he was awarded a Pollock-Krasner grant and decided to take a break to work abstractly. The pictures from that “experimental phase,” as he calls it, were influenced by early American Modernism, as well as the brightly painted figurative scenes of Mayan art. 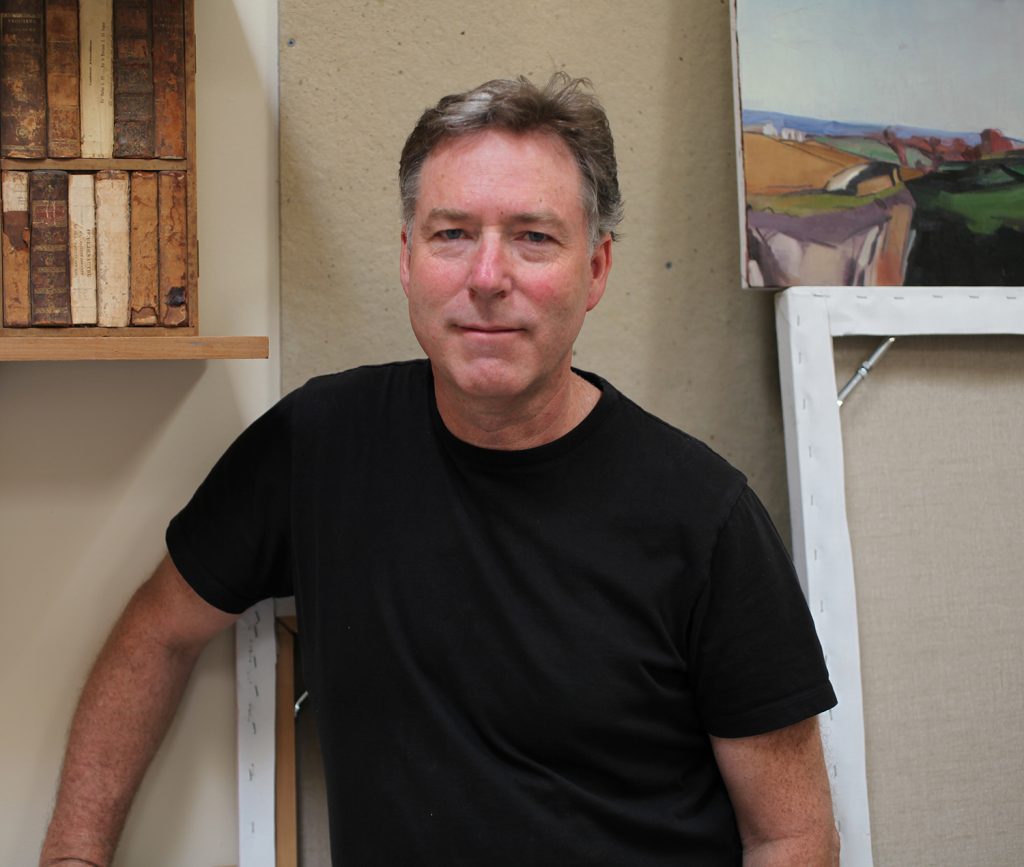 Christopher Benson in his studio

Of late he has been looking to the giants of previous eras, Gustave Courbet for a series of seascapes, and to the old ghost of his youth, JMW Turner. Before leaving his studio, he shows me a huge landscape painting, based on images of the Standing Rock Indian reservation in South Dakota, where skirmishes have been ongoing over a proposed oil pipeline. It’s a large tempestuous work, loosely based on Turner’s well-known painting of Hannibal crossing the Alps, with a lone rider in the middle and an ominous storm arriving, shaped loosely like a black snake—a metaphor for the pipeline. “From time to time I go off and get crazy and loose,” Benson says. “That’s what I really want to be doing right now.” Looking at the Courbet-inspired seascapes on the computer, he adds, “This maybe has something of what I’m talking about—the geometry of the interiors, the gesture of the Turner-y things. It may be that’s the place where I want to be. I haven’t figured out how to channel that into the figurative pieces yet.”

If you’d like to support Christopher Benson’s campaign to publish his monograph about his work and life—a beautiful book and a great read, from which parts of this profile are taken—here’s the link to his fund-raising campaign. And stay tuned for Vasari21 tips on crowd-sourcing for artist projects at some future date.