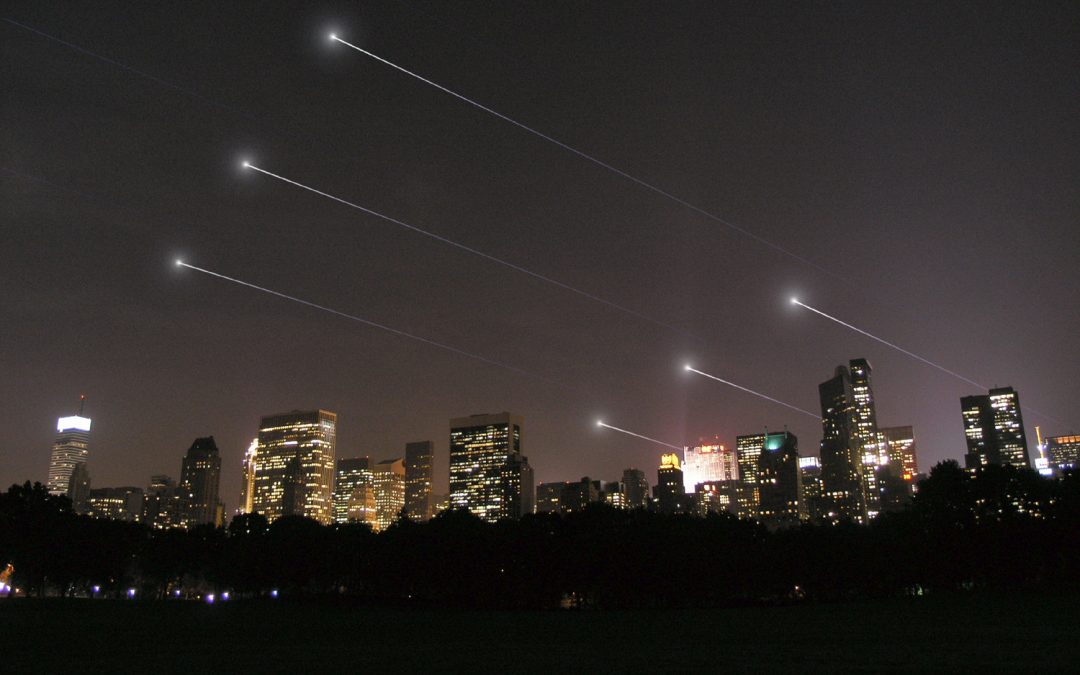 Through the middle of November, in a corner of Railyard Park known as the Rose Ramada, a strange light show teases the shrubbery just behind Site Santa Fe, the town’s cutting-edge venue for contemporary art. As visitors stroll through the circular grounds, bluish light animates ten of the plantings, picking out the internal tangles of the vegetation, passing across the surface in such a way that some of the bushes appear to expand and contract—almost to breathe. As light shows go, it’s one that seduces instead of stuns, in part because the source of illumination is not obviously apparent: 10 video projectors high off the ground. 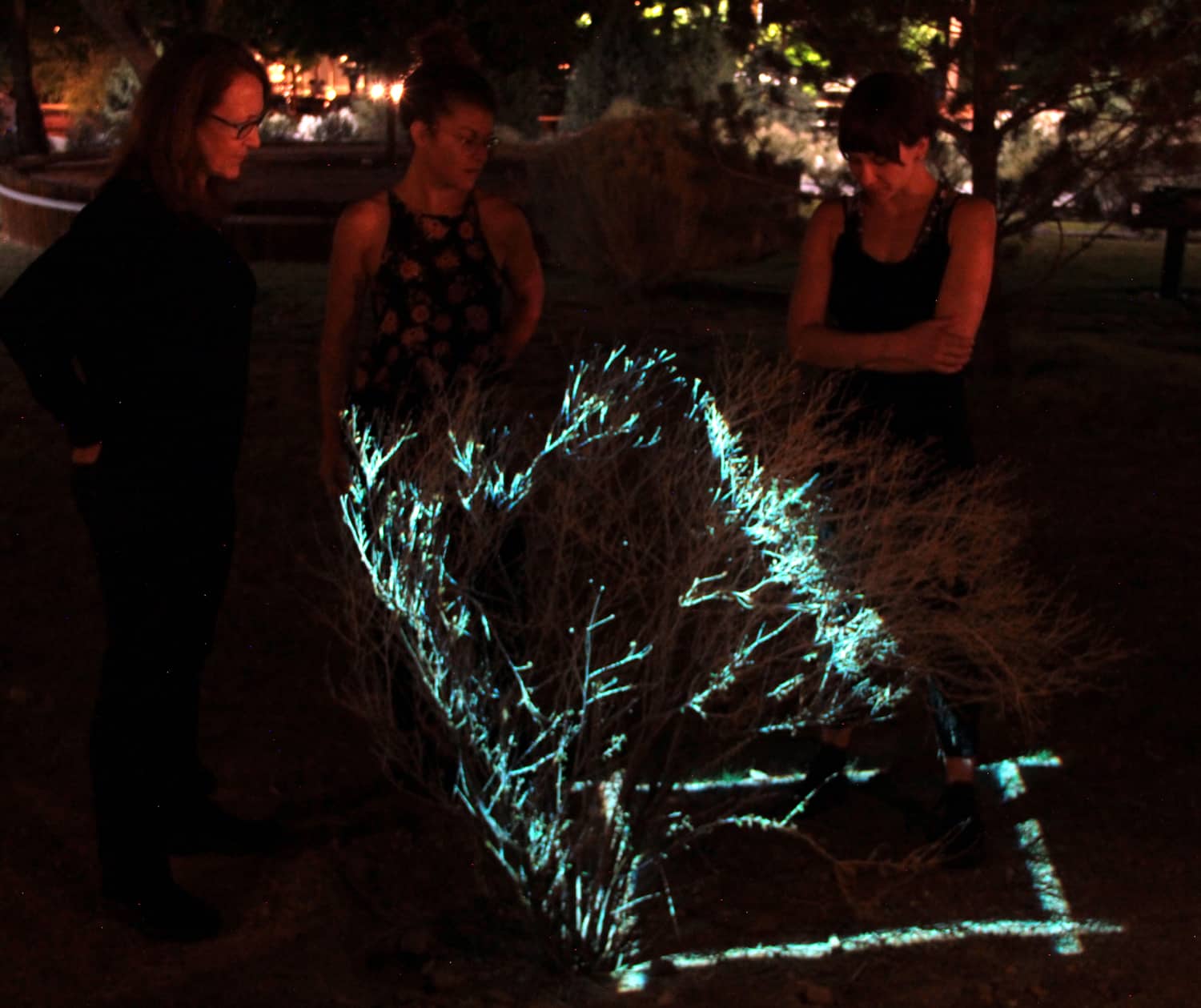 Called “Scanners,” because that’s what the projectors do, the work is one of a series of site-specific, often ephemeral endeavors artist Bill Dolson refers to as “conceptual land art.” Like many of his other works, this one brings together a 50-year background in computers, an interest in video, and a passion for the New Mexico landscape.

Dolson grew up in a working-class neighborhood on the west side of Chicago, and though his parents encouraged his curiosity about art and artists enough to send him to the Art Institute’s junior school, when it came time to get serious about his education, he was urged to look elsewhere. He started out as a physics major at the University of Illinois in Urbana, but soon gravitated to computer science (the school was one of the three leading centers for computer research in the U.S.) “When I was still in high school, I was making computer drawings and composing computer poetry,” he says. “I’ve always been interested in using computers for aesthetic production, and I ended up pursuing an independent degree program in computer science and cinematography.” 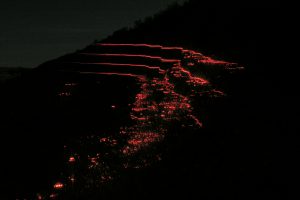 Inside the airplane hangar at the Santa Fe airport, which houses both his 1966 Mooney and office, the artist shows me photos of his younger self on a large monitor: one shot captures the archetypal hippie nerd, with shoulder-length hair, seated in front of a ballistics computer from a Polaris submarine. “It was blindingly fast,” he says, “one of the first that actually had a display. At that time you talked to computers using a teletype, a keyboard and printer, but I had an animation camera, and we made some of the first color computer animations.”

After graduation, like any young ambitious artist of his generation, Dolson headed for New York, where he found a 2,000-square-foot loft for $500 a month, which was “totally illegal” because this was well before tenant laws to protect and upgrade loft living. “I was interested in being a filmmaker for a while,” he says. “So I got involved with other young directors and actors, and we did collaborative ventures where we would take turns acting and writing and directing one another’s pieces.” 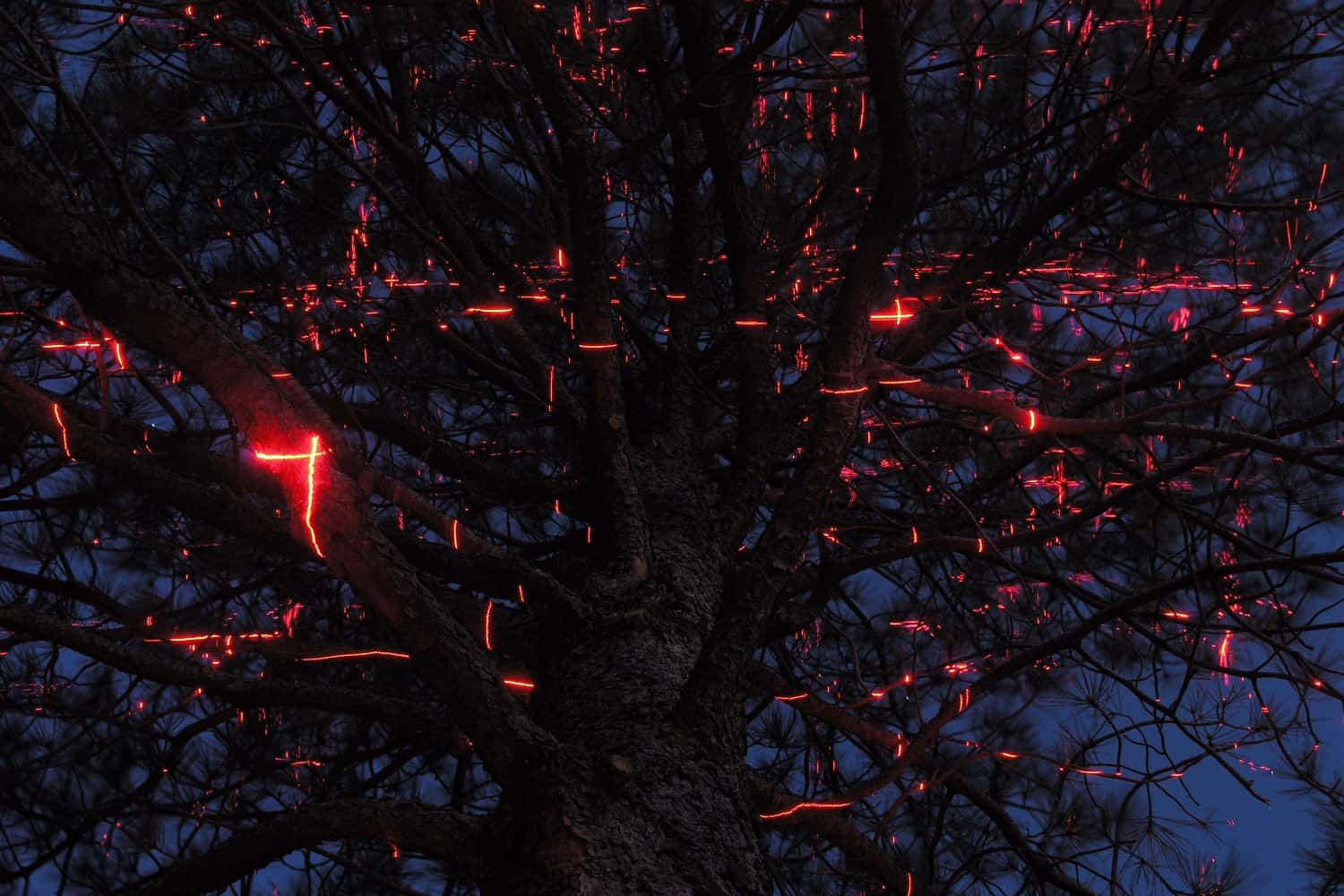 What eventually turned him off filmmaking, he explains, was “understanding how the film business works. I was inspired by the German filmmakers, like Fassbinder and Wenders, who had an incredible amount of autonomy and really were auteurs. But that’s not the American system—it’s just way to complicated and indirect for me.”

In the early ’80s, living in SoHo, Dolson gravitated toward the art crowd, becoming more and more interested in video. “The independent video boom was happening, and people like Bill Wegman were making artist videos that aired on Saturday Night Live. So that seemed a more productive way to go.” Among other projects, he shot a video for feminist artist Hannah Wilke called “So Help Me Hannah,” in which the artist appeared naked with a handgun.

Dolson was also a member of a group of artists who experimented with “satellite imagery of hot spots around the world, which was commercially available and we sold to TV networks,” he says. “The Department of Defense was so lame it didn’t know what was happening. They accused us of hacking surveillance satellites, which was ridiculous. We were using publicly accessible imagery of the Iran-Iraq and Falklands wars. Anybody could buy it.”

To pay the bills, then as now, Dolson works as a computer engineering consultant, an expertise he’s honed along with his art practice over the last four decades. “I would do some consulting, accumulate some money, and then take a year off to work on art projects. I decided early on that I was not interested in being a starving artist.” Among other projects, because of an interest in the human figure, he made hundreds of videos of dancers, working with a couple of dance troupes, who used the films to assess their work. “They were almost like figure studies,” he says. 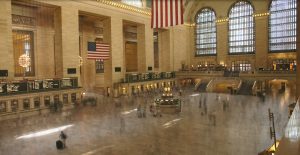 By the early 1990s, though, he and his ex-wife decided they wanted out of the downtown art scene—indeed, out of art entirely. She was a “very advanced, fashion-forward designer,” he says, the kind of avant-gardista who did fashion shows in parking lots. As the emergence of large-scale branding pushed brasher, broker talents out of the game, and downtown Manhattan morphed into a high-end shopping mall, both decided to drop out of the art world entirely. “There wasn’t a sense of community anymore, and a lot of my contemporaries were moving either to Brooklyn or back to the Midwest to raise families,” he recalls.

So Dolson relocated to the little town of Boonton, NJ, and started racing cars and running a shop that built custom automobiles and restored historic models. This was not so big a stretch as it might seem at first—even as a kid, the artist had a passionate interest in building model cars and planes. And his grandfather, with whom he was close, built race cars in the 1920s and taught him how to tune up a car when he was only ten.

Then around 2000 came another series of changes. Dolson earned pilots’ licenses for small aircraft and gliders and withdrew from auto racing altogether. In 2002, the couple moved to a ranch in rural central New Mexico. On his C.V. the artist notes that he discarded “all artwork produced to date except for one box of photographs and slides.” They bought a modest ranch in the middle of nowhere and then “here I was flying gliders every other day and I became really connected with the land, and fascinated by land art,” he recalls. “I thought, Well, I’ve always been interested in computer animation and video and moving images—and now I’m interested in land art. So how do I fit these all together?” 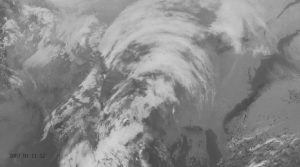 He began to envision projects that reflected an intense involvement with the land: drawings made of dust trails and contrails, a “Cloud Series” using artificially created clouds, large-scale images composed of fire and smoke, land-art works using the public power grid and public lighting systems of urban areas. These were, of course, primarily conceptual, all designed to be ephemeral, yet described in great detail on his website.

One such project was inspired in part by the testing of ICBMs in the mid-1980s and led Dolson to imagine a land-art project that produced artificial meteor showers. He applied for and was given a residency at Eyebeam in New York, which bills itself as “a place to think creatively and critically about how technology [is] transforming our society.” The residency ended up lasting a year and Dolson started producing images of what the meteor shower might look like over different cityscapes. At Eyebeam, after figuring out the orbital dynamics, he did a show of ten big video projections of meteors whizzing across the night sky, each nearly as bright as a full moon. In reality, such a light show would have cost millions of dollars and most likely have been vetoed by the Department of Defense. 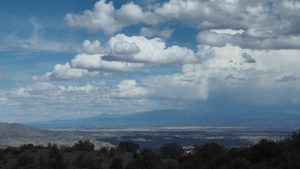 After a few years in New York, Dolson returned to New Mexico, to the small village of Villaneuva, and embarked on videos and more human-scale light projects.  Not surprisingly, he had become interested in “things that I could actually do,” and using lasers from Home Depot, he produced site-specific “drawings” that project upwards into the branches of a Ponderosa pine, for example, or on to the mud-cliff wall of an arroyo.

Beginning with the Eyebeam residency, he also started producing time-lapse videos that compress a single day into about four minutes, so that the skies over the mountains near Santa Fe become a swift-moving short-lived diary of light, shadow, and clouds. He’s done the same with the manmade landscape—a bird’s eye view of downtown Manhattan and the East River, or a day in New York’s Grand Central Station, condensed and compressed (and eerily empty of crowds: “I wanted to get all that fussy activity out of the way,” he says). 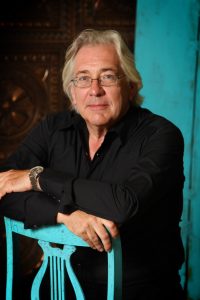 Since 2009. Dolson has also been seriously pursuing a master’s degree in art history at the University of New Mexico in Albuquerque. His thesis will be on the “representation of clouds in 19th-century continental art,” which is to say the natural world as seen by artists in Europe, not Britain, though he is a great admirer of Turner and others. “I like things to be both beautiful and edgy,” he says. “To some people this may seem interminable,” he cautions as we study video after video in the hangar, the roar of planes providing a sound track. “But to me the work has resonance. Not enough media art is art historically referenced,” he concludes. “I look at these images of moving skies and I think of Constable.”