Artist’s Block and How To Beat It 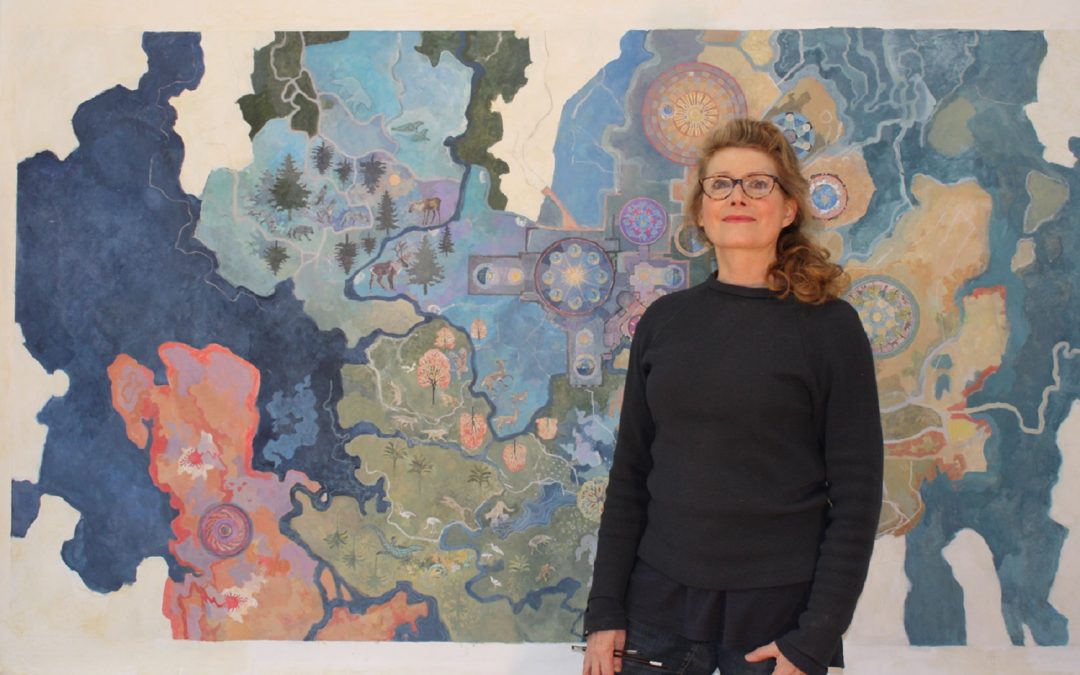 Feeling stymied? In a slump? Disconnected from your work? You’re not alone. 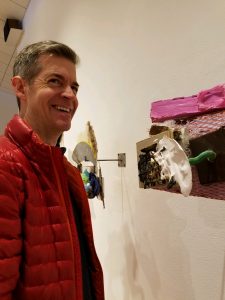 Jim Condron at his recent show at Loyola University in Baltimore, MD

We’re all familiar with writer’s block from the many cinematic clichés. The author sits at his typewriter or word processor, smoking and drinking and muttering profanities. The author fills a sheet of paper with a few tentative scrawls, wads it into a ball and tosses it into a corner, to join the many other balls of wadded-up paper. The author tosses her laptop into the Hudson, the Seine, the blue Pacific (well, I haven’t actually seen this one, but it can’t be long in coming).

But artist’s block? I can’t recall a single movie that features the painter/sculptor/video artist staring hopelessly into space or suffering a panic attack in the studio or moaning in despair at the works on the walls. And yet from the ten or so site members interviewed, it seems that artist’s block is not an uncommon thing.

The symptoms can range from total paralysis to outright panic to feelings of doubt and inauthenticity. “I didn’t talk to anyone. I literally quit making art because I felt I had nothing to say, and I began questioning my whole identity,” says Jim Condron, whose show at the Julio Fine Arts Gallery at Loyola University in Baltimore, MD, just ended. “I was looking at all kinds of other things, asking, What do I want to do? Open up a hot-dog stand? I’m not qualified to do anything else.” Similarly Karen Jilly, who recently relocated to Los Angeles, says, “I lost my drawing confidence. Some mornings I would wake up and think, ‘I don’t know how to draw.’ I would do a Google search on ‘how to draw.”

At its worst, there may be tears: “The most extreme for me was when I was crying on the floor,” says Tamar Zinn. “I had made my first forays into abstraction in the early ‘90s. I knew I was on to something exciting, but it was terrifying at the same time, and I was filled with self-pity. I would come into the studio, thinking, ‘Okay, today I’ll be able to get back into it,’ and that wouldn’t happen.” 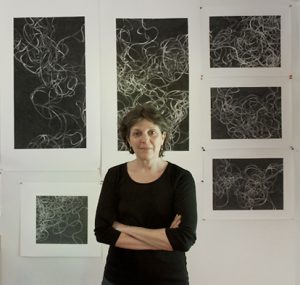 Among those interviewed, the average block seems to be about three to nine months, with two years at the outer limits. Alison Berry says that when she made a radical switch in her approach to her painting in 2004, that was how long she needed before she started feeling good again. “It’s not that I didn’t work at all,” she admits. “I made attempts, but I was experiencing a shift in perspective at the time, and a lot of my work has been about undoing things I was taught in the Western tradition of painting. So change was hard.”

Causes of artist’s block seem to fall into almost predictable patterns. The loss of or disruption to a working environment can provoke a period of feeling stymied. While she was building a new studio at her Wetport, CT, home, says Niki Ketchman, she found herself without a place to do much of anything. When the studio was finally ready (the four months expected for completion turned into a year), her mind suddenly went blank. After recently moving from Phoenix, AZ, to Los Angeles, Jilly also went through a period when she felt off track and out of balance. “I can’t relate to what I started in Arizona,” she says. “I have three big wooden panels with drawings and paintings, and now they’re not working for me.”

Jilly adds that part of the problem was the pressure of being in a new place, telling herself, “I need to meet new people, I need to find a gallery.” She knew, intellectually, that “it’s not about the art itself,” but that doesn’t necessarily make the block any easier to overcome. 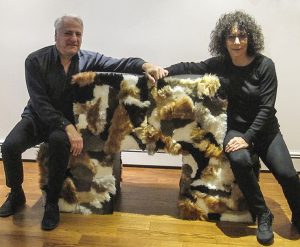 Not surprisingly, the death of a loved one can mean a serious disconnect from the art. “We had an Australian shepherd dog who was very dear to us, and we  had to put her to sleep,” says Brenda Goodman. “I couldn’t paint for nine months after that. I couldn’t go into the studio. Then one day I painted myself looking around, bewildered. I showed myself in a quandary about getting back into the studio and about what I was going to paint. I included things that were dear to me and pleased me visually.” Pookie, the beloved dog, is in the painting to the far right of Goodman’s six- by- six-foot canvas Quandary.

As Goodman suggests, there’s a Catch-22 here: the work itself can become a kind of cure if only you can get back to work. “When my mother died, when my father died, I’d work out my grief in a painting, The way I got through hard times was to paint it right away, but when we lost Pookie, I couldn’t get myself to paint her. ” she says.

Tamar Zinn says she finds her way out of a funk by looking at other artists. “I turn to the ones who give me great comfort,” she says. “If I look at Morandi or Diebenkorn or Giotto, I fall in love again, and that takes me away from my misery and gives me a sense of renewal. It doesn’t solve the problem, but it does tell me to keep going.” 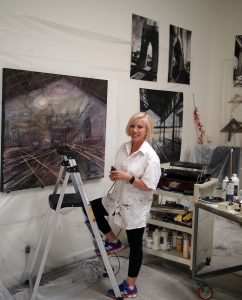 Switching mediums for a time can also help. When she went through a radical transition from Detroit to New York in the late 1970s, Goodman “did sculpture for a while before I could get back into painting. Sometimes you have to open yourself up and do something unfamiliar. The works were about how I was feeling at the time, isolated and alone.”

“I just finished a long block, and it lasted three months,” says Nicola Newton, who lives and works in Santa Rosa, CA. Then I remembered that I had filled an entire sketchbook during that time—so was it a block or was it something else? I used Magic Marker, a medium I’m very uncomfortable with. Once you put the mark down, you have to live with it.”

“I tried doing different things,” says Niki Ketchman. “Doodling, sitting around thinking. I started making 12- by 12-inch collages, using images I saw in magazines and putting resin on the surface. One thing led to another and I’m back into sculpture, with two new series going on.” 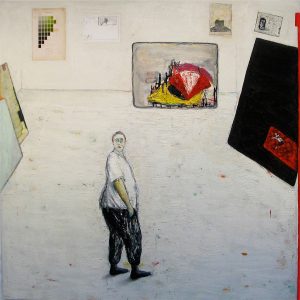 The death of a beloved dog, here shown in the painting at far right, is commemorated in Brenda Goodman’s Quandary (2011)

Oftentimes the most mundane activities can snap an artist out of the doldrums. “I might build a stone wall or plant a garden or paint my back room or clean up the kitchen, directing my creative energies in some other way,” says Berry. “I had to learn to allow myself to take a break,” adds Zinn. “Going for a walk or taking a nap.”

Alexander Warnow, a family and marriage therapist whose practice is in Alameda, CA,  and who has also worked as a “creative coach,” agrees that often simple breaks can provide a cure. “Maybe it’s taking a vacation or going to a movie or laughing for a few hours,” he says. “Or just get off the internet for a day.

If the block goes on too long for what he calls a “natural unfolding of your creative consciousness,” it may not be a bad idea to seek out professional help. There may be other unconscious barriers at work—fear of failure? fear of success?–or maybe just an excess of stress. Do a Google search for “creative coaching” and call around to find someone you feel comfortable with.

A big part of understanding blocks, Warnow adds, is to know that “it’s part of the process and doesn’t mean there’s anything wrong with you.”

Artists who have been working for years come to realize, as Zinn puts it, that “creative work needs a different kind of nourishment” and occasional slumps are to be expected. 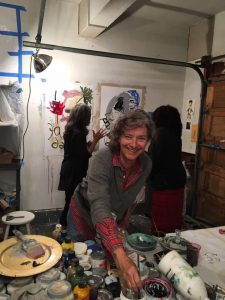 After the upheaval from Phoenix to Los Angeles, Karen Jilly says she is “trying to get into a routine, to be healthier. I’m back to getting up early, listening to a music track when I work out in the morning. I make little notes to myself. I saw photos I had bookmarked in National Geographic for inspiration, and now my mind is starting to slip back into art.

“I’ve gone through this so many times that I know I’m close to coming out of it,” she adds. “I have to get to a point here my desire is bigger than my lack of confidence, and because I’ve been through this before, I know how to get myself out of it.”

Over the years, says Newton, she has learned that “every block seems to be time not wasted, and that good new work emerges in the end. Every time!”