Not to sound like too much of a fogey, but there was a time when the art world abounded with publications devoted to art—Art in America, Studio International, Arts magazine, Artforum, Art News, Connoisseur, Realités—along with about five daily newspapers in New York, some of which regularly covered art and artists. It was a smaller, livelier climate for art, and possibly a more literate one. Now we have an opposite phenomenon: a rapidly expanding art world (1500 galleries in New York, more than 150 biennials, museum expansions all over the world, and countless art fairs), and fewer print outlets for criticism and reporting. Artforum seems as healthy and opaque as ever, but ARTnews will be cutting back to four print issues a year and, so I’ve heard, eliminating reviews entirely. The fate of Art in America, now part of a larger conglomerate that includes ARTnews and the Magazine Antiques, remains uncertain.

On the news front, both the New York Observer and the Wall Street Journal have scaled back on art coverage, and many small-city and small-town papers have vanished entirely. Of course, increasingly, art journalism and criticism are migrating to the Internet, and younger art writers are cropping up at online sites like a cyber-invasion of Whac-a-Mole. But, as more than one artist said to me, an online review still doesn’t carry the same prestige as consideration in print, and the upshot, in this age of the incredible shrinking art press, is to give a paper like the New York Times ever more power to boost or sabotage a career. And the shifting of the landscape means it’s no longer all that clear if there’s any distinction between a critic and a reviewer (and I realize that I too am using the terms interchangeably….more about that in future posts). 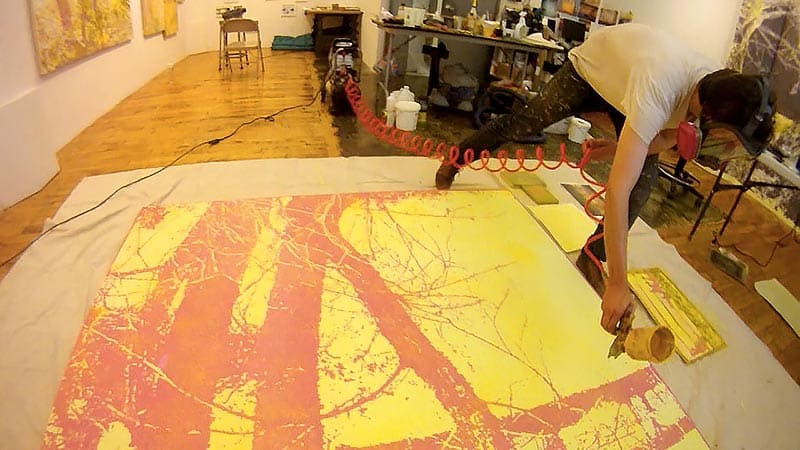 “Most reviews are not criticism,” says Greg Lindquist, who is both an artist and a writer on art. “They are merely descriptive. Thus they are restating, recycling, or expanding on the press release and sometimes prior reviews about the work.” 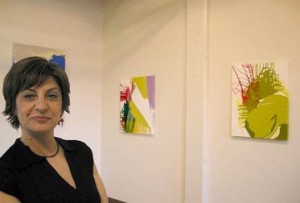 Carolanna Parlato with some of her paintings at Elizabeth Harris Gallery

Painter Carolanna Parlato recalls a reviewer who picked up verbatim sentences from the Elizabeth Harris Gallery’s press release and obviously had little prior knowledge of the artist’s work. The ensuing hot air seemed to focus on a conflict between whether Parlato’s works were about nature or process, and included the memorable statement that her pictures “feel like a Rothko-making machine has broken down causing errors and sputters of erratic color, leaks and drips” (one has to ask: What is a “Rothko-making machine” and how does it sputter?) Much of the rest of the review was equally inscrutable but apparently derived some its thoughts from the gallery handout. “I collaborate with the gallery on the press release,” says Parlato, who started to wonder, “Is my work even about nature? Or about the process of painting? Maybe I need to be more careful about what I say.”

There’s a whole lot of sloppy obscure writing everywhere, and ever more of it is delivered as web content (bear in mind that many sites generally don’t have the advantage of editors, copy editors, fact checkers, proofreaders, or a strong editor-in-chief who does know the difference between a press release and journalism and frowns on terms like “Rothko-making machine.”) But even more dangerous in our age of online addictions, it seems to me, is the proven potential of clever observations to go viral.

Artists and critics had a field day when Walter Robinson coined the term Zombie Formalism about a year and a half ago to describe a new breed of generally young painters who are cranking out canvases that blatantly ape previous styles. “This work is decorator-friendly, especially in a contemporary apartment or house,” opined Jerry Saltz, who wrote a lengthy analysis of the phenomenon in a June 2014 issue of New York magazine. “It feels ‘cerebral’ and looks hip in ways that flatter collectors even as it offers no insight into anything at all.” It was a catchy fun phrase that exploded all over Facebook and other social media sites and sparked a fair amount of debate and hand-wringing. But the sad part of this trend, which did indeed seem to be a trend, as Saltz recognized, “is that even better artists who paint this way are getting lost in the onslaught of copycat mediocrity and mechanical art.”

At least one artist, a painter I profiled in ARTnews a few years back, got tarred with the dreaded brush of the undead. The “zombie paradigm” was picked up by Laura Hoptman, curator of painting and sculpture at the Museum of Modern Art, in her catalogue essay for a show of abstract painters about a year ago (“the metaphor of the zombie….is useful [because] it evokes the voracious hunger for ideas and images from the past….”). It even found an iteration in the pages of the august New York Review of Books. What to do when you suddenly find yourself tossed into a camp you could never have anticipated when you started making your way as an artist years and years ago? The smart painter shrugged her shoulders and went back to work in a studio thousands of miles from New York City. “I simply couldn’t take it seriously, so it didn’t really do any damage,” she wrote. “I have to do what I have to do no matter what other people say.”

And always keep in mind that there are probably as many Zombie Critics as there are Zombie Formalists. (For example, the author of statement like this, which I found recently in an online magazine: Painter X’s “primary subject over time has been architecture manifested as metaphysical and phenomenological space. Over the years it has gestated and morphed into an engagement with how to recreate that space in a means that people can understand without relying on painterly abstraction.” This sounds awesomely profound, but I haven’t a clue what the critic means. His remarks, too, sound like, an evocation of “ideas and images from the past.”)

One of the issues that intrigues me, especially after two decades of writing reviews for ARTnews, is if a piece of writing about an artist’s work ever changed anyone’s mind about his or her practice, or steered the artist in a new direction entirely. Of the dozen or so artists surveyed, most said no, nothing published about the work had ever had much influence. “I haven’t found a critic making a comment that opened up greater understanding of my painting,” says Julian Hatton, in a fairly typical response. “But critics have helped me locate my place in the continuum of painting.” 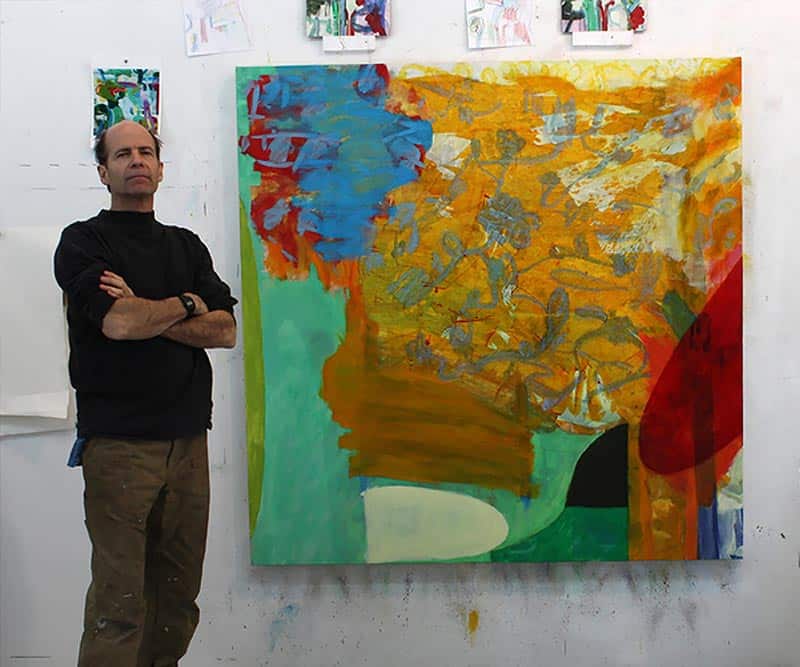 Julian Hatton in his studio

“Occasionally a good review will help me to see what I didn’t see, if the attention is detailed enough to open up a way of looking at the work,” says Susanna Coffey. “I can look at the work through a critic’s eyes, and that may prod me to change size or subject matter.” She adds that “when a review is thoughtful and the publication allows for more than a thumbs up, thumbs down, that’s valuable for an artist.” 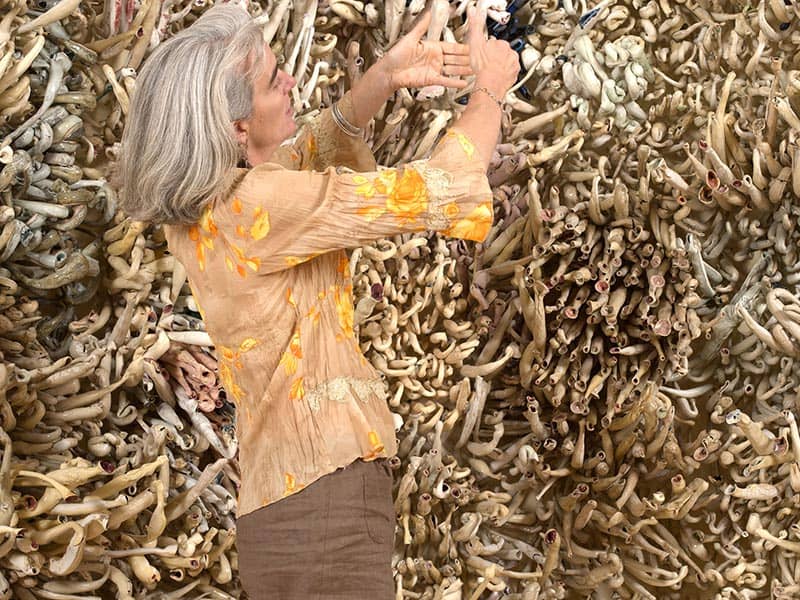 Martha Russo with a sculpture from her “Nomos” series, this one made from porcelain, wood, styrofoam and other materials. Photo: Oren Eckhaus

I was hesitant to pose this question to Martha Russo, whose show of exuberant ceramics at the Santa Fe Institute of Art I’d reviewed a couple of years back, offering a decidedly mixed verdict. But she graciously told me: “You picked up on the unresolved things in the show. It’s affirming to get some good news, but I really like to get the bad news too. That tells me to quit bitching and get back in the studio. It’s a kind of critique in print.”

When Eric Gibson, now editor of the Leisure and Arts page at the Wall Street Journal (and still a working critic), was writing about art for the Washington Times a couple of decades ago, he wrote a review he describes as “both positive and negative.” He ran into the sculptor a few months later and recalls that she thanked him for the review, adding that obviously she would have loved a rave but his take on the work helped her see things she hadn’t. “What artists really want is a critic who gets it,” he says, “who understands what they’re trying to achieve. That shouldn’t prevent you from being critical, but I believe it’s a very good standard to apply to my work as a writer and editor. Your job is to connect with what the artist is doing to help readers understand what’s going on. And if it’s an artist who’s been written about a lot, don’t just recite the conventional wisdom—come up with something new to say.”

Whether positive or negative, of course, the whole point is to get noticed. “It’s a sign that somebody’s out there,” says Coffey. “If there’s a review, at least there’s a voice, and you know that there’s somebody out there who cares about the visual arts. When a well-considered review appears, you feel that the writer has recognized the content that one wishes to be there, and that’s the greatest thing.”

And there is a definite pecking order to the prestige conferred by various publications and various critics, with the New York Times being right now at the very top of the heap, as it has been for several years. “After one of my first shows in New York, Ken Johnson had very smart things to say,” says Coffey. “He had a real idea about my work that others didn’t see, and that was the work’s relation to Minimalism. I got interest from galleries in other countries, and more people came to look, including curators.” How the Times decides who and what to review is still somewhat of a mystery (I can’t get anyone from the paper to talk to me yet), but in Part Three of this report we’ll hear from other critics on what captures their attention.

If you’re uncertain about written material you’re putting out into the world—press releases, artists’ statements—ask a writer for help. We’re often available, at a reasonable fee, to help make your work accessible to a larger public. I’ll even give you some names.