Another Opening, Another Show

Artists find this is a good time to regroup, decompress…or get back to work

The opening, duration, and end of a gallery or museum show can be cause for anxiety, depression, obsession, elation, relief, and any number of other emotional reactions that occur when you step away from the studio and put the work out there. Old hands at the game say they no longer go through quite the roil of reactions they had in their younger years, but it can still be a trial. “I remember having bad dreams that there would be no one at the opening,” says painter Gudrun Mertes-Frady, who shows with Cynthia Reeves and Kathryn Markel. “I’d be the only one in the gallery.” But it gets easier over time, according to Phyllis Ideal, whose group of “iPhone drawings” just closed at David Richard Gallery in Santa Fe. “I had a one-person show at the de Young Museum [in San Francisco] when I was thirty years old, and I almost had a nervous breakdown.” Still, says, Barbara Cowlin, a painter and printmaker based in Oracle, AZ. “An opening is like putting all this sweat into Thanksgiving dinner, and then everyone sits down and they’re done in half an hour.” 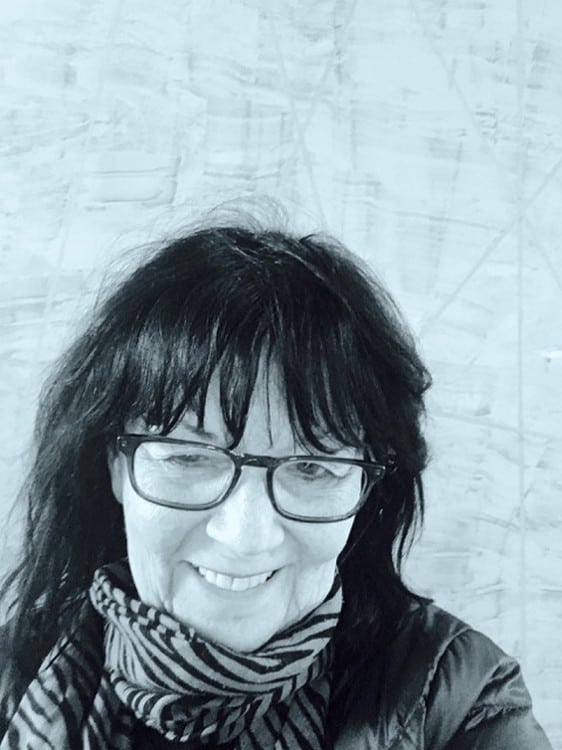 Curiously, the most intense part of showing work may occur in the days and weeks prior to an opening. “Most artists don’t have assistants,” says Valeri Larko,  whose show of gritty but cheerful urban scenes will be at the Bronx Museum of the Arts through late June. “They do everything themselves—framing, wrapping, updating your website and your mailing list. You just push, push, push.” Mary Temple, who works in a wide array of mediums, says she makes a list of people to invite and lets them know what days may be most crowded at the gallery, and she gets the word out on social media. “At the end I need to believe that I’ve done everything I could.” And then of course there is the dilemma of choosing what work to put forward. “You drive yourself crazy finishing the last one or two things when you should look at all the work and decide what will show best,” says Mertes-Frady. 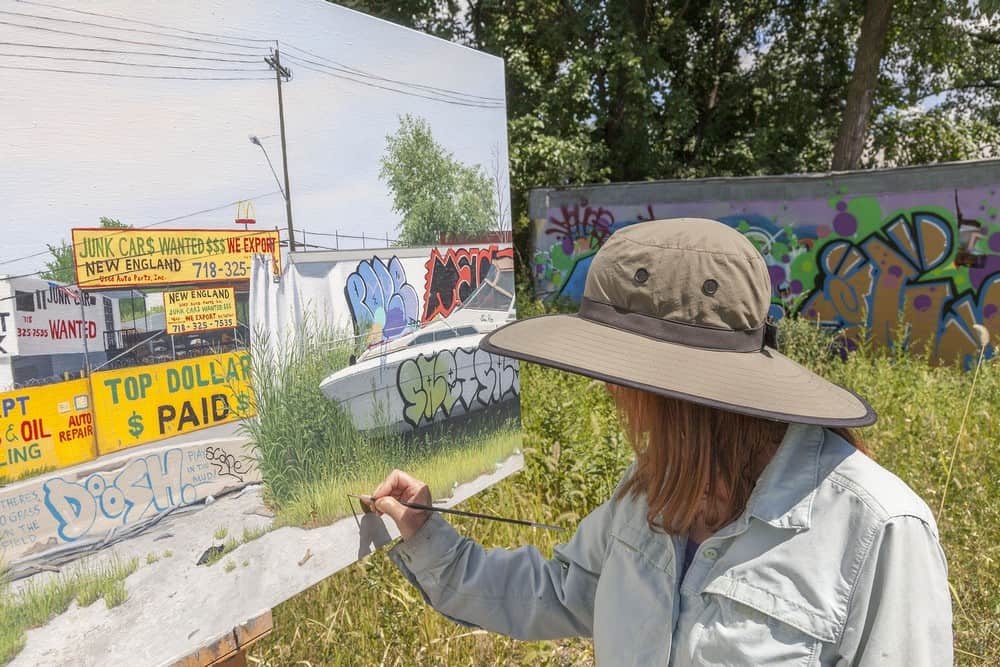 How the show looks and how much input you can have will vary greatly depending on the dealer or curator, or even the stature of the artist. Mertes-Frady recalls that when Gerhard Richter had his first exhibition in Dusseldorf in the 1980s, “he made a model of the museum and then made mock-ups of his own paintings and put them where he wanted them.” But every artist, she adds, knows what pieces talk to each other and how they should be hung or arranged in a gallery. When Mertes-Frady showed with a now-defunct gallery in SoHo, she would work with the owners all day long on installation. “That gave me a sense of confidence before the show even opened,” she says. What can also take the edge off of pre-show jitters is asking others to have a look before the work leaves the studio. “I have previews in my studio, because I know my collectors will want to see the work before the opening,” says Larko. 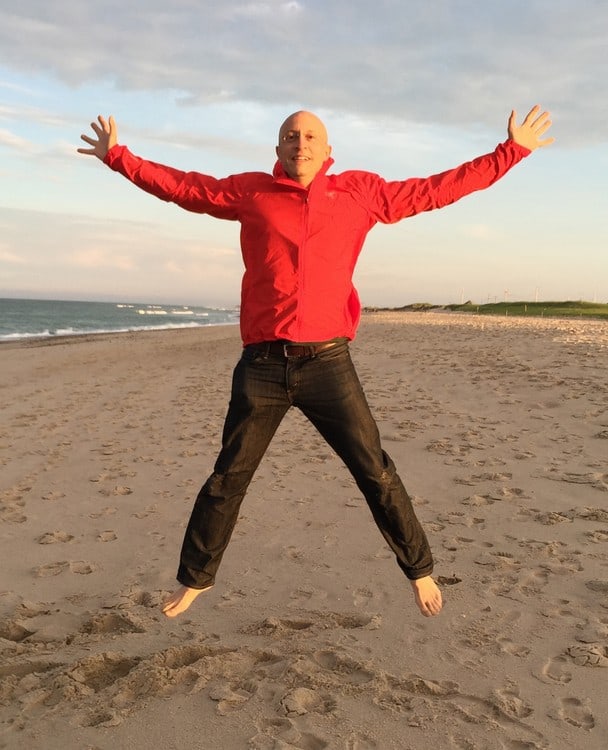 After one opening, Mark Sheinkman took a break, flew to Paris, and proposed to his wife

Artists have very different ideas of how much of a presence they should have while the show is up and running. “I never hang around the gallery,” says Mark Sheinkman, a New York artist who was profiled on the site in “Under the Radar.” “You’ve done your work by making the show and putting it up.” But Tm Gratkowski, who is based in Los Angeles and shows with Walter Maciel, believes that “it’s your responsibility to be present during the show, at least a couple of times a week. To get feedback from other people. That’s part of the transition, moving from a creative process to a listening process. I spend a lot of time at the gallery and invite different people to the show—curators and critics and collectors.” 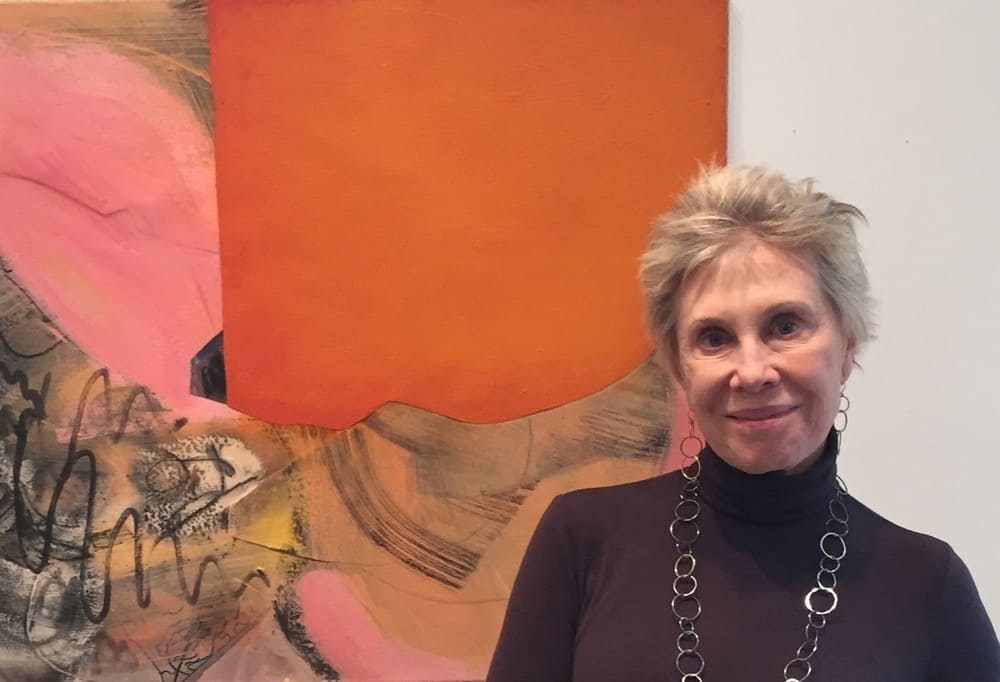 Phillis Ideal in front of her canvas Orange Scorch

Pat Steir, who has had around 400 shows in the course of a long and high-profile career, likes to go to the gallery every day when her paintings are strutting their stuff. “When they’re in the studio, they look one way. Out of the studio, it’s different,” she says. “And I have a different feeling with every painting. Some I’m happy about. With others I’m thinking, ‘Well, darling, you could use a little of this or that.’ For me, it’s like seeing someone you love in a different country or a different room. And sometimes this is the last I will ever see of the work. It gets sold and then it gets put into storage and then it’s gone.”

“An opening is like putting all this sweat into Thanksgiving dinner, and then everyone sits down and they’re done in half an hour.”

There is also the matter of handling the reactions of others. “A show is like a giant studio visit,” says Elisa d’Arrigo, an artist whose work in ceramics is represented by Elizabeth Harris in New York “You’re opening yourself up to comments. You have to be able to handle whatever might come your way, like a really horrible review. Not that one ever really is.” 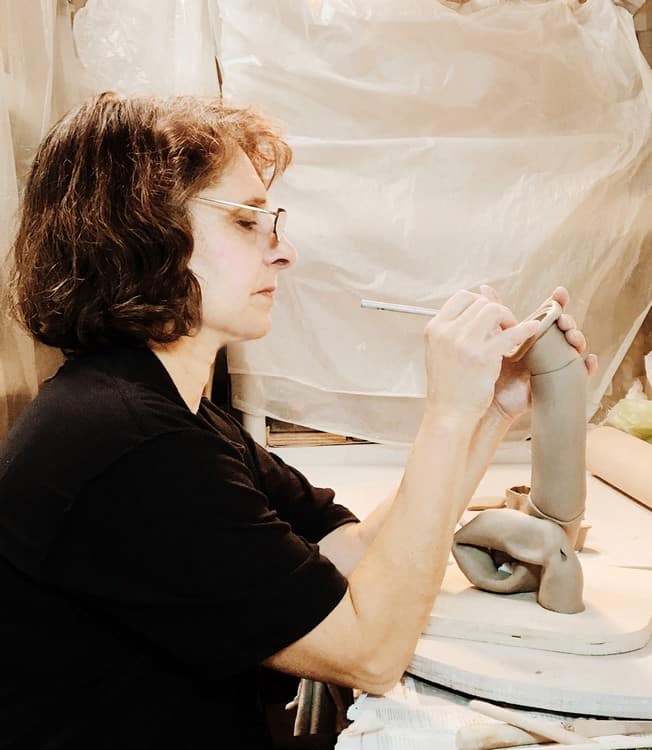 And some responses can be just plain annoying or baffling. “One time someone said to me, ‘I don’t get it,’” recalls Gratkowski. “I tried to find out what he meant by that. I was trying to listen carefully but I couldn’t grasp what the problem was. And this was another artist, not someone off the street.”

Gerhard Richter made a model of the museum and then made mock-ups of his own paintings and put them where he wanted them.

There are occasions, though, when visitor reactions can prove helpful. “I had one work at a small gallery in New York, in which I had used plastic screening as part of a collage, and some people really seemed to like that,” says Ideal. “They were fascinated by the illusional aspects, and I really paid attention to that. I’m not always influenced by what people like, but it can be a sorting-out of my own direction.” 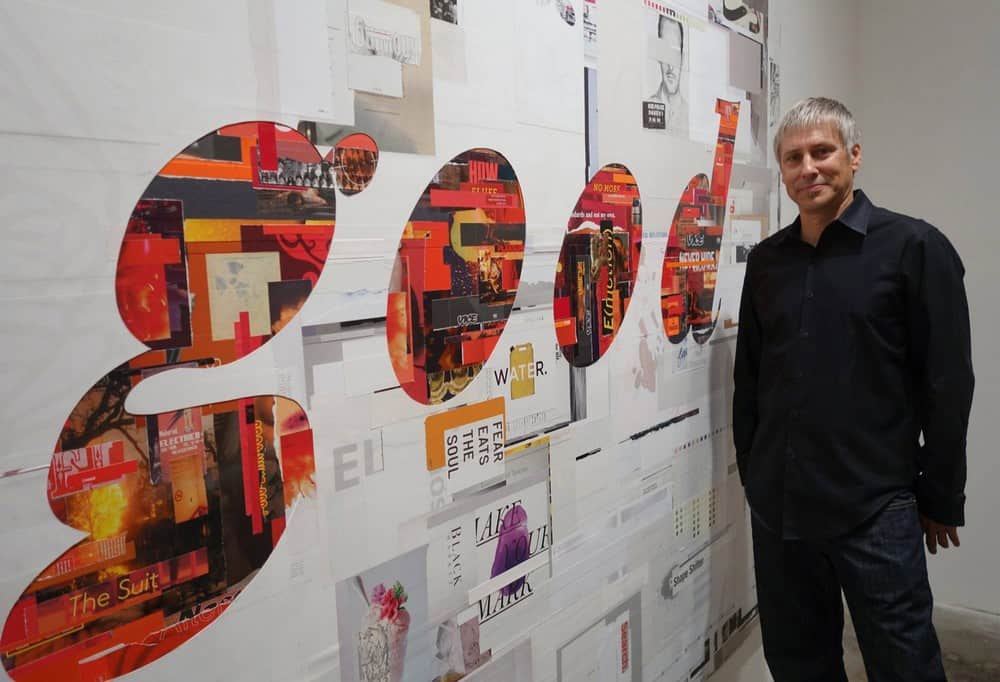 Since many sales happen before or after work is exhibited, some artists claim they are not overly concerned about the marketing end of things. “I’m happy when I sell my work,” says Mertes-Frady, “but it has nothing to do with the work. I do not get depressed if nothing sells out of the show right away.” But others, of course, are elated when the work is moving briskly. “Sales are important because they allow me to make more paintings,” says Larko. As an artist who has been showing and selling for some three decades, Christopher Benson, a painter based in Santa Fe, has waxed philosophical and practical about the whole process. “I’ve learned over the years that you have to stay in motion all the time. If you have a gallery that isn’t selling your stuff, you have to find another. The relationship clearly isn’t working.”

“If you have a gallery that isn’t selling your stuff, you have to find another. The relationship clearly isn’t working.”

Artists have different ways of handling the letdown that can occur after a show is up and running or after all the work comes down. Sculptor Michael Dunbar, who is based in Springfield, IL, adheres to the theory of right- and left-brain thinking and believes that an “exhibition causes you to live more in the left brain. You have to do all the organizational and social stuff that goes with an opening. Then you have to get back into the creative part of your mind. Music will take me there. Rock, jazz, disco—I’ll go into everything to get myself back into a happy place.” And then for him it’s about returning to business as usual. “If I don’t have twenty projects in the works, I’m not happy. If I went to the Bahamas, I’d probably be making sand castles.” 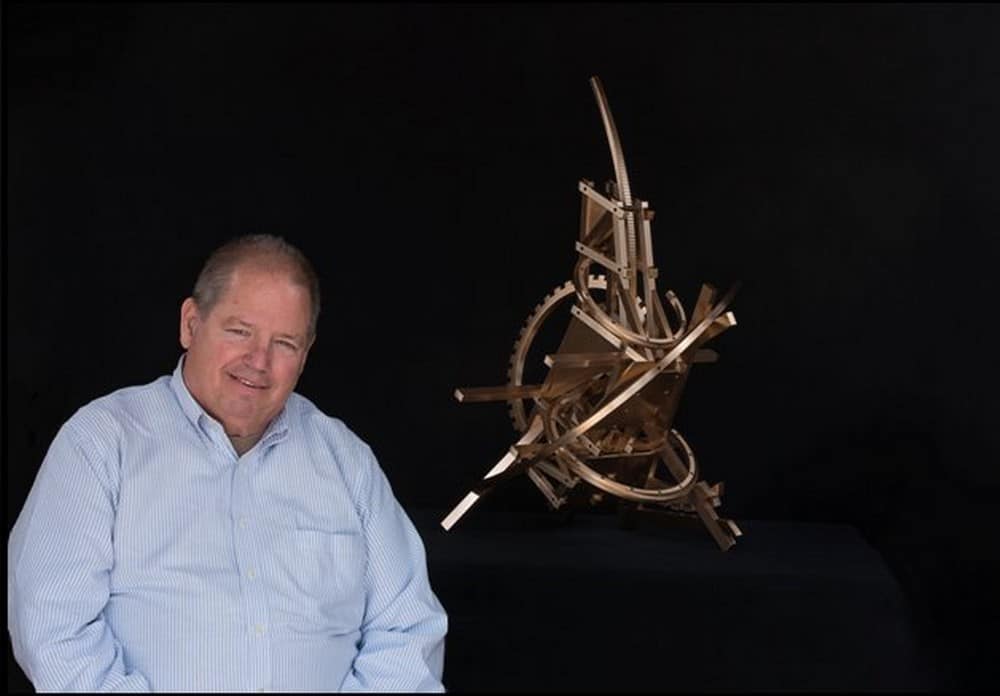 Others, though, see the post-opening or post-exhibition period as a good time to take a break. “What do you do when the energy ends abruptly and you don’t have anything in front of you?” asks Gratkowski. “You need to appreciate the slow-down. Step back and refocus. I might go on vacation or camping. This can be an empowering transition.”  Sheinkman, too, sees this as an interesting period for making the most of his down time. In the late 1990s, he took off for Paris right after a show and took that romantic opportunity to propose to his wife.

“You’re opening yourself up to comments. You have to be able to handle whatever might come your way, like a really horrible review.”

Still others stay put and give themselves a little time to reorganize the studio. “I start cleaning and re-organizing. I throw out old paints and brushes,” says Cristina Zorrilla Speer, who lives and works in Laredo, TX. “I paint something just for fun and try not to be worried if it will turn into something good or not.” 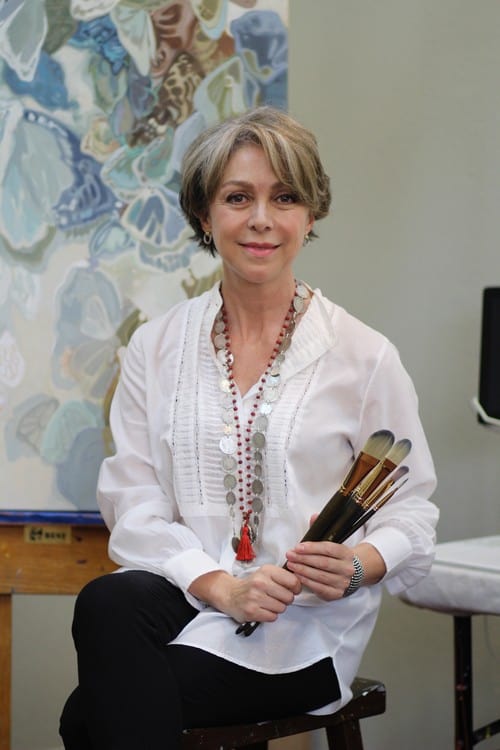 After a show, Cristina Zorrilla Speer cleans up the studio

Facing an empty studio after a show opens or closes can often be the most depressing part of the whole process, so many have discovered a variety of ways to forestall any postpartum blues. “I try really hard when I know I have a show in the works or to line up other shows” says Cowlin. “I always want to have a lot of irons in the fire. “ 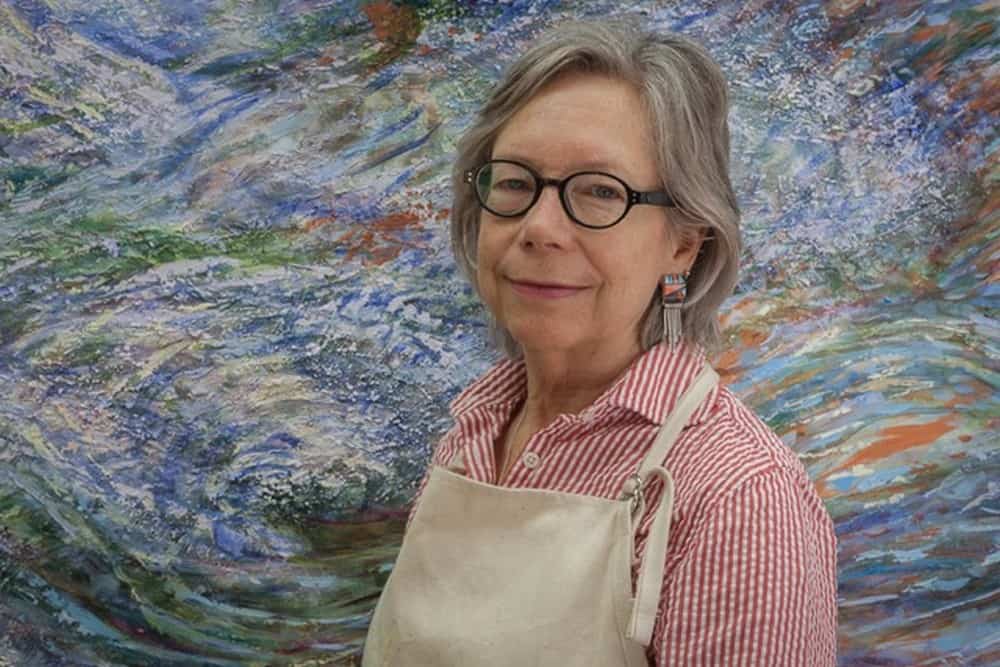 “I love having a show up and I never want it to come down,” says Mary Temple. “One thing that helps mitigate any negative feelings is that I have a public art practice, which makes me feel like I always have something for people to look at. Every once in a while I meet someone who knows my work from the subway or other public space, and that reassures me that I’m connecting in some way.

“And when I get back to studio,” she adds, I may have five to seven pieces going at any one time. There’s always something to engage me, the apparatus is always in motion.”