The Fate of the Art at the Four Seasons

Over the holidays, I learned from a friend that the venerable Four Seasons  Restaurant in the landmark Seagram Building on Park Avenue would be closing this summer. I was a little late to that news, and it is not technically about to be shuttered for good—as I had first imagined—but the fabled eatery will be refurbished and a trio of new chefs moving in.

Supposedly not much can happen to the serene and majestic Philip Johnson interior, which has landmark status and has long been the scene of “power lunching” for the likes of Jackie Kennedy (who called it “the cathedral”), Vogue editor Anna Wintour, novelist Michael Korda, famed ad man George Lois, cosmetics magnate Leonard Lauder, and others whose names are fading faster than the three-martini lunch. The two soaring spaces that make up the restaurant—the Grill Room and the Pool Room—could no doubt use some sprucing up and many have complained of late that the food is not what it once was.

But what, I wondered, would happen to the art, in particular the dazzling, seemingly weightless Richard Lippold sculptures that hang over the bar and in the mezzanine? Made of hundreds of slender bronze tubes of varying length, the work was commissioned in the late 1950s to balance out the rather forbidding height of the 20-foot ceilings and was installed by the sculptor himself. Lippold never quite made it into the ranks of his peers—like Jackson Pollock, Mark Rothko, and David Smith—but many of his sculptures, as critic Ken Johnson put it, “seem to dissolve into pure light.” I’ve spent many any an hour at the bar, nursing a 12-dollar glass of wine, mostly to admire the precise but airy construction of this amazing marriage of engineering and art, and I love to show it to friends in search of a great place for a nightcap. And it has made me sad to think of it gone. 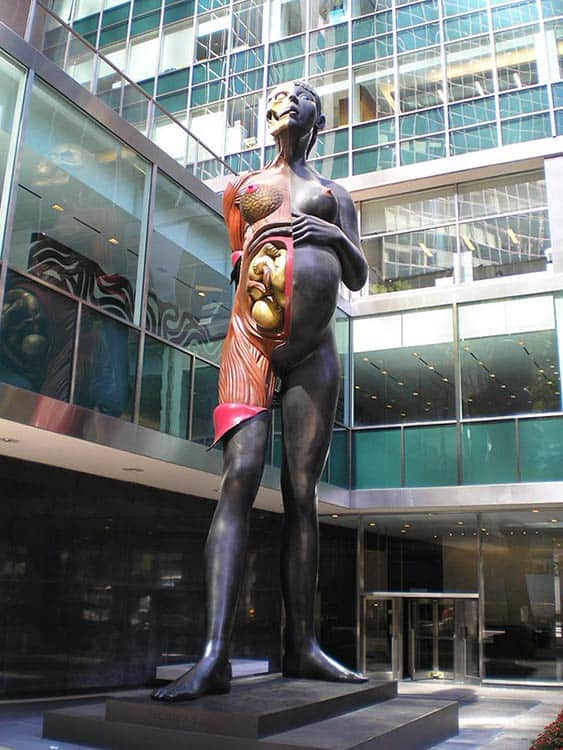 Damien Hirst’s The Virgin Mother (2005), briefly in front of Lever House, is now on the grounds of Aby Rosen’s Westport, CT, estate.

The Four Seasons has a mixed track record when it comes to art. Before the restaurant’s opening in 1959, Mark Rothko was commissioned to paint murals for the interior, but refused to deliver the works when he learned they would be in the restaurant and not the lobby (a man of deeply socialist convictions, he balked at the idea of fat cats chowing down near his masterworks). At one time there were tapestries by Miró and the restaurant rented Pollock’s landmark Blue Poles; rotating exhibitions featured Frank Stella, Richard Anuskiewicz, and Robert Indiana.

But when the real-estate developer Aby Rosen acquired the Seagram Building in 2013, a new era in the art of the Four Seasons was clearly dawning. As reported in Vanity Fair, Rosen used the sneakiest of tactics to try to unload the 1919 Picasso tapestry, Le Tricorne, that graced the walkway between the Grill and Pool Rooms (it was rescued by the New York Historical Society). Rosen’s tastes run toward the usual high-rolling cookie-cutter collector trophies from Damien Hirst and Jeff Koons: Hirst’s ghastly sculpture of a 33-foot-high, pregnant, half-flayed Virgin Mary, once sited on the plaza outside Lever House on Park Avenue, is now on the grounds of his Connecticut estate, much to the dismay of neighbors. Jeff Koons’ Balloon Dog and Urs Fischer’s turdlike Big Clay #4 have been part of a rotating sculpture show on the plaza of the Seagram Building.

In that company, what could possibly be the fate of Richard Lippold’s understated, complicated, shimmering sculptures? For now, they appear to be safe. According to Trideep Bose, general manager of the Four Seasons, “The Lippolds are part of the landmark package and will remain in these premises.” But I’m not entirely reassured. If Rosen could attempt to remove a Picasso at three in the morning, only to be halted by court order, who knows what might hang over the bar in the future?

Photo credits: Richard Lippold’s sculpture, a triumph of art and engineering. still hangs over the bar in the Grill Room.