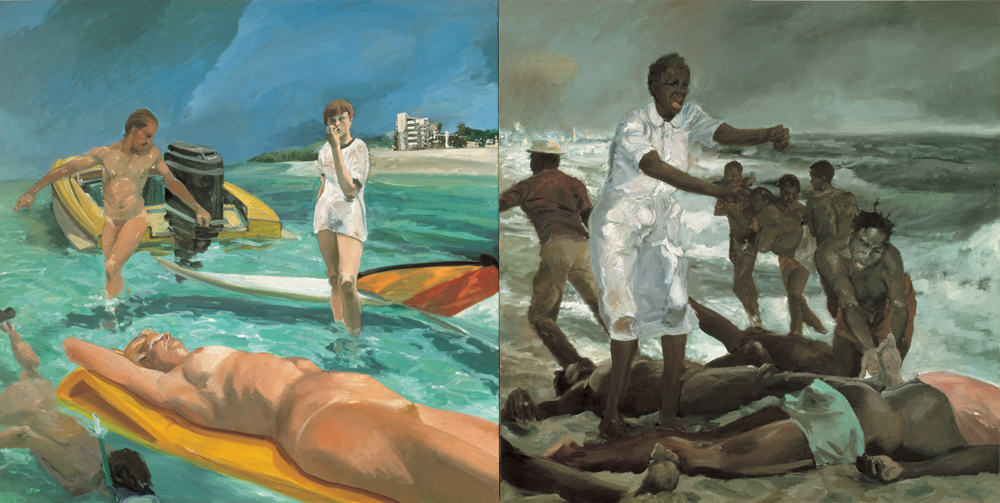 Protests at the Whitney raise questions about race, politics, and bad painting

In case you missed it, the big art-world kerfuffle of the week, possibly of the season, happened following the launch of the 2017 Whitney Biennial last week when several artists took umbrage at Dana Schutz’s painting Open Casket. The work is based on photos from 1955 showing the mutilated body of Emmett Till, the teenager who was lynched by two white men in Mississippi for allegedly approaching the wife of one of his assailants in a manner she considered offensive. The boy was beaten so brutally that his uncle could identify him only by an initialed ring. His body was sent home to Chicago, where his mother, Mamie Till Mobley, decided to hold an open-coffin funeral. Mobley dealt with her loss, as two writers from The New Republic pointed out, “by controlling the postmortem narrative and the image of her son in death.”

“I know that his life can’t be returned but I hope that his death will certainly start a movement in these United States,” she said at the time. And indeed those black-and-white photos, among other documentation of egregious discrimination against African-Americans, helped lend momentum to the nascent crusade for civil rights in this country. (In a heart-breaking footnote earlier this year, Carolyn Bryant, the woman who accused the boy of flirting with her, confessed to fabricating the story and providing false testimony during the trial of Till’s murderers, who were acquitted.) 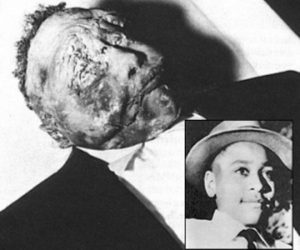 1955 photo of Emmett Till in his coffin 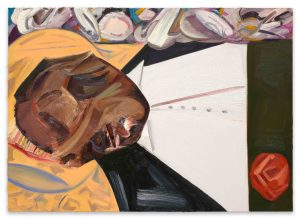 In this latest chapter of the Emmett Till story, an emerging 24-year-old black artist named Parker Bright objected to Schutz’s “appropriation” of Till’s image, which had surfaced on various social media sites. On the day the biennial opened to the public, Bright walked into the museum’s fifth-floor galleries wearing a shirt that read, “Black Death Spectacle,” and stood in front of Schutz’s painting, blocking it from view for several hours.

The following day the artist Pastiche Lumumba hung a banner from the balcony of the High Line, the urban walkway adjacent to the Whitney, that read: “The white woman whose lies got Emmett Till lynched is still alive in 2017. Feel old yet?” And somewhere in the midst of the gathering storm, Hannah Black, a Berlin-based writer and artist, published an open letter online, which has since been deleted, calling for the Whitney “to remove Dana Schutz’s painting Open Casket and with the urgent recommendation that the painting be destroyed and not entered into any market or museum.” (I won’t even get into the lunacy of a fake letter from Dana Shutz asking that the painting be removed from view….because more fake news gets us into the realm of Trumpian surrealism.)

The museum’s curators, Chris Lew and Mia Locks, responded. The artist herself responded. In a letter to The Guardian (a British newspaper!), she stated, somewhat  missing the point: “I don’t know what it is like to be black in America, but I do know what it is like to be a mother. Emmett was Mamie Till’s only son. The thought of anything happening to your child is beyond comprehension.”

But lost in all the coverage of the fracas, both online and in print, was any discussion of the painting itself. Schutz’s rendering of Emmett Till’s corpse shows the body from the waist up, the smashed head resting on a pillow, its features even more battered beyond recognition than in the photos carried by the media in 1955. But wait a minute! Is that indeed a face, and if so where are the eyes, the mouth, the nose? It looks to me (and, granted, I’m only judging from images on the screen) more like a badly smashed coconut or a carelessly trampled chocolate truffle. You’d have to know the original photo to realize the source, and this rendering of Till’s face is thus leached of any real power to shock. It’s simply inept painting, a self-indulgent stew of swirling brushstrokes. Even Picasso or Francis Bacon in their most exaggerated moments left us with some semblance of human features. Even the photo of Emmett Till tells us this was once a boy’s face, or we would not respond with such revulsion and sorrow.

In fact, the whole composition is strange: a scrim of what looks to be either seashells or flowers at the top of the canvas, the body reduced to stark geometries with a jaunty red rosette at the waist. It’s hard to know what this painting is trying to say (but then, admittedly, I’ve never been a big fan of Schutz’s cartoony expressionism). We had to wait for Schutz’s post-opening statement to tell us that she was approaching the tinderbox subject as a mother empathizing with horrific loss.

Yet the larger argument of the protests launched against Open Casket seems to be that a white woman—or perhaps even any white person—dare not approach black subject matter.  If that’s the case, why was there no big hue and cry over Eric Fischl’s huge tableau, now on another floor of the Whitney as part of the show “Fast Forward: Painting from the 1980s”?  Half of that diptych (at the top of this post), called A Visit To/A Visit From/The Island, depicts dark-skinned Haitian refugees on a stormy beach, “a nightmarish vision, likely derived from photographs…, where people struggle, lament, and lie drowned,” to quote Peter Schjeldahl’s review.

So is it okay for a white male painter to tackle tragedies with racial implications (the Caucasians in the other half of the work are blithely oblivious to Third World suffering), also based on photos, but not all right for a white woman to do the same? Or should only people of color have the right to address the still shameful problems of racial inequity? 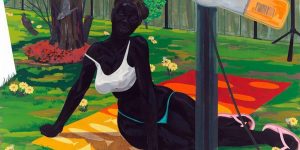 I wonder what the reaction would be if a white woman had produced one of Kara Walker’s saucy pickaninnies or banjo-strumming field hands. Or a coal-black semi-nude figure in the manner of Kerry James Marshall. I believe the response from people of color would be, “Hands off our stereotypes and our subject matter! That’s our legacy to dissect, but not yours.”

Race is a complicated issue, and will remain so for a long long time, but ultimately the power of any image lies in its ability to provoke, seduce, or unsettle. For me, Schutz’s painting does none of these. Only the protests against Open Casket lend it any real clout.