Scams and Shams in the Art World: Part One

There's a Con in Every Corner

Several years ago, I heard about a woman, a self-styled art adviser, who would invite artists to a plush hotel room and for a fee of $500 lend an hour of her time to look over portfolios and then write down the names of ten galleries (to which she had no connection) they should approach to represent their work. It wasn’t a very sophisticated way of separating artists from their hard-earned cash, nor was it truly a swindle in the legal sense, but she was sufficiently credible and charming to keep her “consulting” business going for quite some time.

In the era of the Internet, and more than a decade later, I expected to hear of much more cunning and elaborate schemes for ripping off artists. But though there are quite a few dubious enterprises out there, they fall into only three basic categories; and though only one of these is blatantly fraudulent, and could possibly be prosecuted as mail fraud, the others are legitimate but of borderline value to your career. These are the Internet Tease, the Bogus Biennial, and the Pointless Publication.

It works like this, and I will allow an artist friend, who prefers not to be identified (call her Gertrude) tell the story of another artist friend, who also prefers to remain anonymous (call him Pablo). “This happened about fifteen years ago,” writes Gertrude. “My friend Pablo got an email from someone who said she lived in Texas but was moving to London. She had seen his work online (we later figured out that she was probably trolling the Saatchi free artists’ pages) and wanted a painting for her new home. She asked the cost of two or three different pieces, and he answered back with the prices. She then emailed that she and her husband would like to buy the least expensive of the three canvases, which made the whole transaction seem more believable. Then quite a long time went by before Pablo got instructions on how to proceed with receipt of payment and shipping.

“Finally he heard back, and suddenly everything was a big rush for the buyers,” Gertrude continues. “The husband was en route to London but was currently in Chicago and would send him a cashier’s check from his Chicago office. The check would be for more than the price of the work to cover shipping costs. Pablo was asked to forward the difference via Western Union to the buyer’s London office right away to cover C.O.D. costs. The ‘collectors’ would then schedule a pick-up from the studio via FedEx and gave Pablo the London address. He was beginning to get a little suspicious but thought he had nothing to lose if he got the check.

“A cashier’s check arrived for $2800 more than the cost of the piece. Pablo deposited the check and was very clear that he would not send the $2800 until the check cleared. But figuring that a cashier’s check was like cash, he went to the teller at his bank the next morning and asked if the check had cleared. He was told that it had. So he withdrew $2800 and walked over to Western Union and sent the money to London.

“Then FedEx never arrived. When Pablo called the local office, the clerk said they had no record of a request for a pick-up. That’s when my friend knew he’d been scammed. He told the Citibank manager at his branch that the teller had claimed the check had cleared. The manager’s answer was the what she meant was that he simply had enough money in his account to cover the check should Pablo wish to withdraw that amount right away. The manager said that all checks needed to be sent back to the bank of origin and returned to them before the check was officially cleared, even cashier’s checks, and that always took about a week. Pablo argued that the use of the term ‘cleared’ was misleading, but to no avail. Evidently the bank is responsible only for money already in customers’ accounts—not for third-party checks that haven’t cleared. The bank told Pablo to file a police report, which he did, but of course there was no way, especially at that time, they they were going to make efforts to track a chain of emails for only $2,800.” 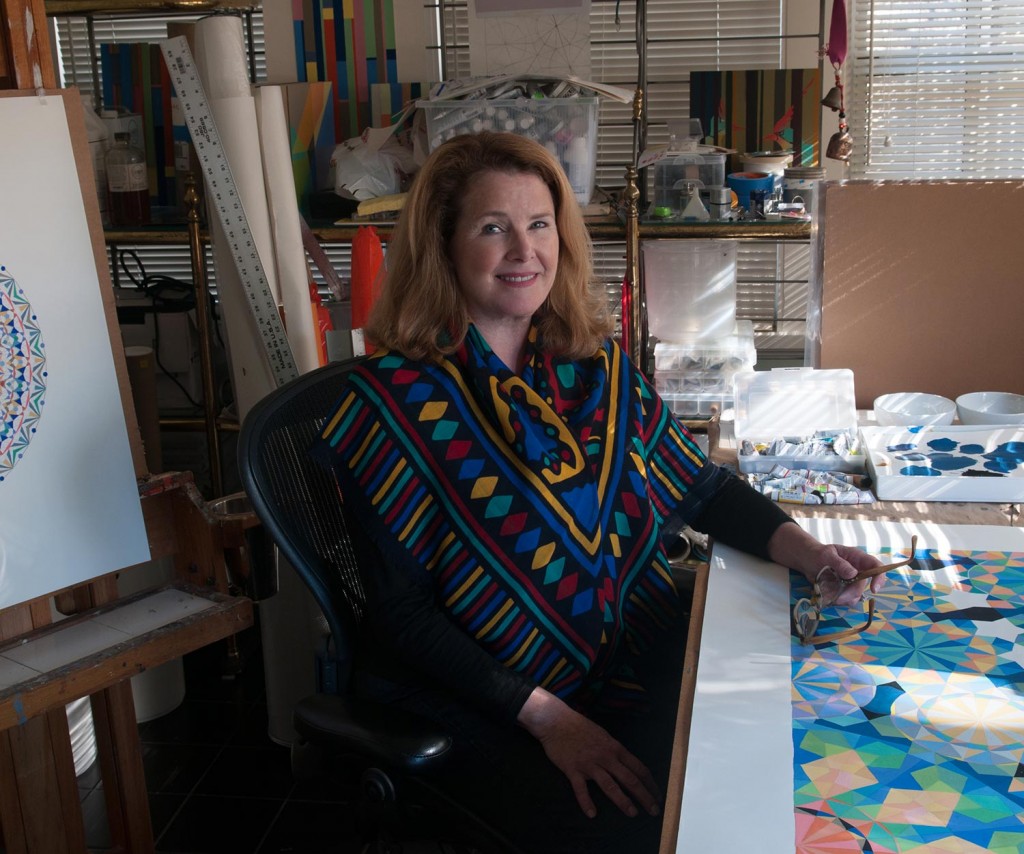 Susan Barnett in her Dallas studio.

When I put out the call to Vasari21 supporters to tell me of similar scams, variants of this story recurred over and over. There was generally a big move involved on the part of the buyer, and sometimes specifics were provided to try to add credibility. Via email, a “collector” who wanted to buy one of her paintings told artist Susan Barnett, who lives and works in Dallas, that she was moving from London to New Jersey. “I googled the address,” says Barnett, “and saw a beautiful house for sale. So I called the realtor and found out it was still on the market. The would-be scammer had clearly found it online.” Barnett decided to see how far she could take things. The scammer sent a check for $5000, for a painting listed at $1800, drawn on an account for a company the artist couldn’t find online. When she did track down the company, a guy who said he was a construction worker answered. When Barnett told him she had a check for $5000 in his name, he said he knew nothing about it. Still curious, she called FedEx, since the check had arrived in one of their envelopes; she was told they couldn’t do anything about it. “The person at FedEx said, Don’t cash that check as it will implicate you in the scam,” she recalls. Meanwhile the scammer hemmed and hawed, emailing that the check was sent by mistake and making other excuses for the misinformation. “I just strung it out and in the end finally said no,” says the artist. “Maybe they hoped the check would look sufficiently genuine that it would clear temporarily and I would send the painting.” 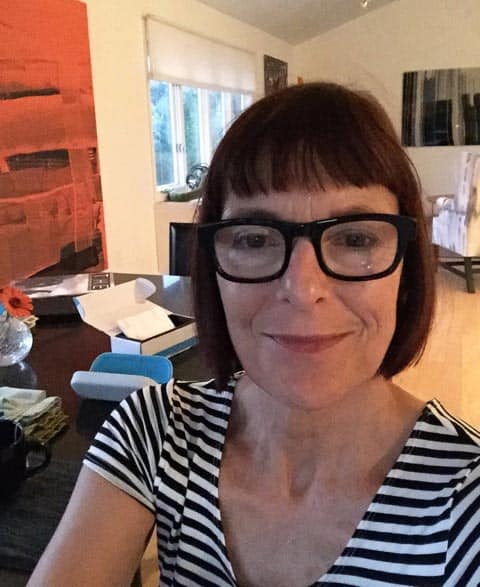 Kate Petley tried to play along with the scammer.

Kate Petley, a painter based in Longmont, CO, tells a similar story of a scammer who was in the process of moving from South Africa to the Pacific Northwest. “I told her to work through my gallery, but still wanted to see how far I could take it,” she recalls. “I said that I like to get to know my collectors better. Could we set up a time to Skype? And she got back to me, saying ‘I’m sorry, we’ve been so busy!’” The “collector” finally did send a personal check for a couple of thousand over the amount. At which point Petley contacted the attorney general for Colorado “because this was clearly mail fraud.” His office never responded. 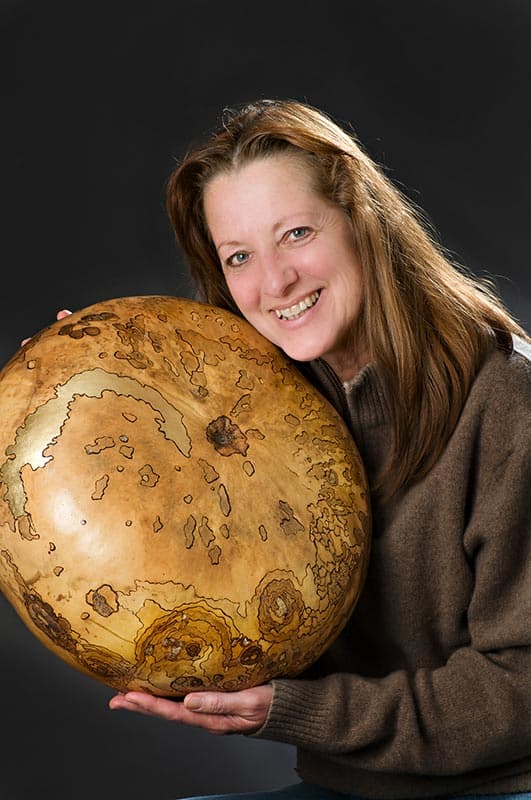 Serena Kovalosky with one of her “gourd” sculptures

And, finally, sculptor Serena Kovalosky offers another twist on the game. The scammer, who wanted to ship a piece to Saudi Arabia, asked if she would contact a courier in the United Kingdom, explaining that using this service would avoid customs fees. If Kovalosky would use her credit card to pay the shipping costs, he would then reimburse her in a check for the sculpture. “It was clearly a way to get my credit card information,” she says, adding, “This was one of the more intriguing variants. Every couple of months I get a similar solicitation. They all say they want something quickly, as soon as possible. They all play on a sense of urgency, and there’s always some quirk in the shipping arrangements.”

How do the scammers find the artists’ websites? I wanted to know. But of course, the answer is fairly obvious: There is Saatchi’s online collection, for instance. Or any number of artists’ organizations. Or one can simply troll Facebook and look up an artists’ friends. Generally, the scammers seem to choose those who are not represented by mainstream galleries and whose prices are not out of sight. And of course the work must be of a reasonable size to be easily shipped. If you receive a dubious email, such as those described above, a fun retort might be: “I’m working only in a conceptual vein at present, but would be happy to send you a description. Suitable for framing. At your expense.”