I met Jake Berthot in 1992 while I was in my junior year at the School of Visual Arts in New York. I had already discovered his work and fallen in love with it. So much so that I tried copying everything I saw that I liked: Untitled (White Form), Cherokee Lift, Hagal’s Anvil, At Noontide, and so on.

I was eating lunch one day in the cafeteria at school, and as I was leaving I saw Jake having lunch himself. I walked up to him and introduced myself. I then invited him to look at my work, which he agreed to do. I don’t know what he thought when he came to my studio at school to look at my work—whether he was shocked, flattered, took pity, who knows—but he continued talking to me.

I pursued Jake Berthot as a teacher and an artist because I believed then and now in his values of what it means to be an artist.

I asked the administration if I would be able to study with him and was told that he taught graduate students only. Jake nevertheless agreed to meet with me once a week, and so for a year and a half on Tuesdays we spent an hour at noon talking about art, painting, what it meant, and what it meant to be an artist. I did not always understand what he was saying, but our conversations awakened a continuing curiosity and kept me working, trying to figure it all out.

He also worked out an agreement with his 57th street gallery to allow me to visit the private viewing space to spend time with his work. He encouraged me to look at Cézanne and Rembrandt. He let me borrow a copy of books that were important to him and introduced me to Aesthetic Theory, by the German philosopher Theodor Adorno.

As for the work I was making, he would periodically look at my paintings and talk about them, saying “that color swells” or “that mark has a certain speed to it.”

After I graduated from SVA in 1994 I continued to paint in the privacy of my own studio. And I continued to manipulate the medium in the way Jake did and to create similar abstract forms, with encrusted surfaces. The forms eventually turned into silhouetted figures. In 1997 or 1998 I gave up looking at and trying to copy his work. I knew there would be no place for me to grow if I did not stop seeking to imitate his subjects and processes. I went to graduate school in 1998 at Ohio State University, and that marked the point at which I started working as an artist and developed a visual language that allowed me to arrive at my personal vision.

In 2007 I started to look at Berthot’s work again, specifically at the grid or web that became more visually available in his later “tree” and “landscape” paintings and drawings. They hold a certain visual truth for me: namely, the construction of an organic form (which I believe some paintings can be) is an intuitive process often anchored by geometry or logic. When I am working in the studio I still think about some of the comments Jake Berthot would make regarding what painting is about. “Looking at painting requires a slowing-down process.” “The distance at which you view a work is important in how you experience a work.” “Painting has a presence, it tells you what it wants to become and you have to be a slave to it.”

Jake Berthot did not make large canvases; to the contrary, most of his works were small in size but vast in definition. He made work that requires the viewer to look, to see, and to experience

Visually. I think these values have been instilled within me and in some ways have helped me categorize the definition of “good painting.” I pursued Jake Berthot as a teacher and an artist because I believed then and now in his values of what it means to be an artist. The world of painting suffered a loss with his passing a little more than a year ago, but has gained so much because of the work he created.

Jake’s visual language grew out of the study of artists he admired, through avid looking and keen analysis. In the early part of his career, one could see that his work was reminiscent of Rothko and Resnick. But in the last 20 years of his life, his painting became more evocative of Ryder, Turner, and Cézanne.  He taught and influenced scores of artists, and his spirit will remain present as we continue to look at the work; each mark that he laid in place was a sign of thought, belief, and felt experience. 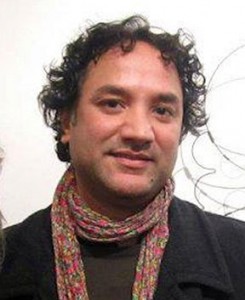 Riad Miah is an artist and educator who lives and works in New York City. His work has been exhibited at the Baltimore Museum of Contemporary Art, White Box Gallery, Rooster Contemporary Art, and Simon Gallery. He has participated in several artist residencies, including the Vermont Studio Center and Skowhegan School for Painting and Sculpture in Maine, and he is the recipient of grants and fellowships from the New York Foundation for the Arts and Germination Europe (Germany). He has been a professor of art at various colleges and universities, including the School of Visual Arts, New York Arts Program, Parsons The New School for Design, and Ohio State University.