Without my four sons, I would be a different artist. They were born one right after the other—the oldest was four when the fourth was born—simplifying as many complications as were created. I dearly wanted a family, and knew that when the children were in school, I too would return to my classes.

I started drawing as a tiny child: it was a compulsion to discover and examine life by drawing, getting inside of my ideas and perceptions visually, moving them on paper, pretending to move them, pretending to be them. I had grown up with a fertile interior life and kept my real feelings, observations and opinions well separated from any possibility of criticism and ridicule by exacting parents for whom emotion—or observation which was aesthetic, abstract, different—spelled trouble. It was a whole interior world, a quiet place within that makes room for the company of ideas, a place where I could catch ideas on the fly and imagine, becoming the artist I was inclined to be in the privacy of an invisible space.

It was important to me that my sons develop uniquely and as creatively as possible on their own, as each was intent upon being. I learned from them…watching a toddler examining a leaf or a bug, inspired by the zen focus that comes so naturally to him. Or marveling at the way one would disappear and return with pockets of nature’s moving creatures. And the laughter, the constant laughter. I had never realized how laughter could pierce the buffering space that separates people. But it was the experience of loving and being loved by children compared to the stoic rigor of my own well-meaning parents that created a halcyon time in my new life, letting my interior cache of ideas slip out into the open for new, more fluid, observation.

The boys never missed a chance to be part of some messy project, like painting a forest over the walls and ceiling in their room, or searching out wood from a torn-down old building to make a kitchen table, all of them joining in and learning a life of constructive efforts. They embodied the overwhelming energy that I examine in my drawings, the profound mysterious power in the universe that creates and sustains our world.

When the youngest went to kindergarten, I went back to school, making it home at three so we could all be together. They would come along with me to Otis Art Institute on “sick days’,” when other art students would teach them ceramics for the day, or they would sit by me, drawing, or we would work together on  making a communal painting (Red Bird Painting now hangs in one son’s young son’s room). With all the messes I made, and the ubiquitous presence of intricate drawings on my grandfather’s drafting table (which I still use to this day), or on a large wall that I would be working on, they never once, over many, many years, never once interfered, never touched one of my drawings, or damaged one, even as toddlers. It was as if my children could sense that art was something to be respected, kept safe. 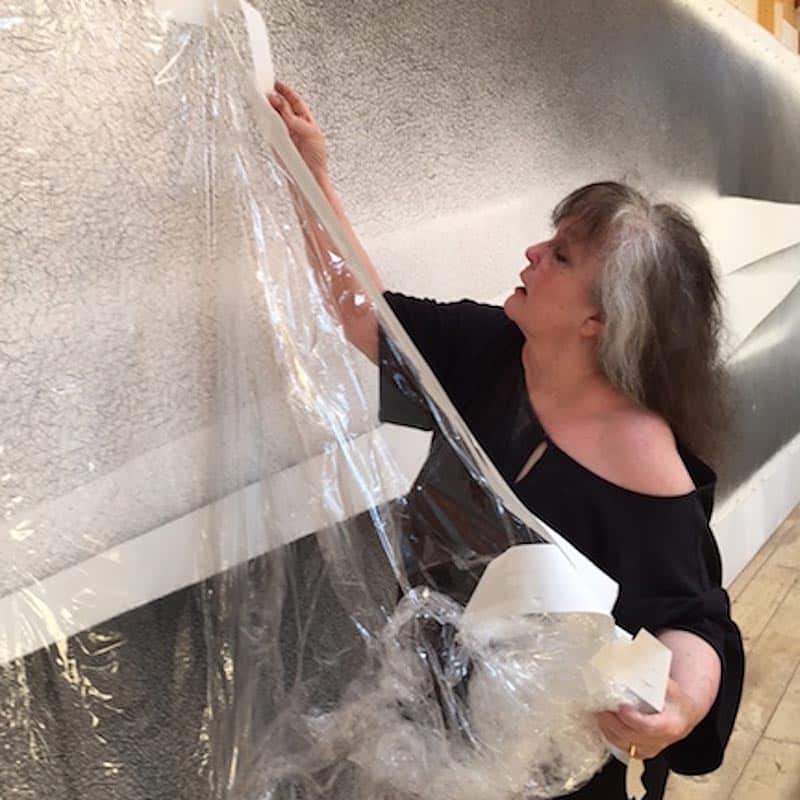 I always encourage artists to have children if they want them. Mine freed me, exposing the safety of sharing feelings and observations, respecting my own combining of interior and exterior aesthetic interactions, affecting my drawings. Having time enough to work was never an issue. I still get up very early in the dark quiet of the morning to draw, a habit developed when my sons were babies. And over many years, I have accomplished as much as I would have done all alone, if not more. As time has passed, working and showing drawings, often very large drawings, one or two would likely be part of the process. They too would get up in the middle of the night to help make something work, or plot out installation ideas with me, traveling to hang shows .

They are off now into their own distinct and creative lives—teaching, building, writing, making films. And yet they continue to encourage and bolster my need to draw, no matter what. I can’t imagine how I could have produced the drawings I have, had my sons not been along for the ride. They are my friends, and they love one another. I would indeed have been a different artist without them. I would have been a different human being.

Christine Taylor Patten lives and works in the mountains of New Mexico with her husband, artist Gendron Jensen.  She received a B.F.A from Otis Art Institute in Los Angeles in 1974 and has recently returned from her exhibit, “micro/macro – 1001 drawings” in the 14th Istanbul Biennial. Patten has exhibited at The Drawing Center and Knoedler Gallery in New York, as well as at galleries in London. Her drawings are in the collections of the Whitney Museum of American Art, the Los Angeles County Museum of Art, the Albright-Knox Gallery, the Hood Museum, and the New Mexico Museum of Art, among others. Art historian Griselda Pollock has written about her drawings in Encounters in the Virtual Feminist Museum.