A tour of Martha Russo’s retrospective at the Boulder Museum of Contemporary art in Boulder, CO, is somewhat like a visit to admire the creepy-crawlies in a ten-year-old boy’s bedroom. There is a giant, slithery sculpture on the floor that looks a bit like a double-headed spermatozoa. There are pieces made of pigs’ intestines. Open the drawers of the cabinet called hold and you’ll find things that look like severed ears, eyeballs, or strange snails. But my favorite work in the show is the huge installation affixed to a curving wall. Called nomos, it’s made up of 20,000 individual ceramic “tendrils”—in subtle shades of green, blue, brown, and yellow—and from a distance they resemble the fluid wavy grasses at the bottom of a murky lake or pond.

When I remark that much of the work is both gorgeous and revolting, Russo is delighted. “I want the viewer to have a real visceral response to the attraction-repulsion thing that’s going on.”

The show is handsomely installed to showcase both the grotesque and the ravishing aspects of the artist’s 20 years of art making, and it took about three years to bring it all together. “These works are all about morphing and transitioning and becoming something else….but you’re not sure what,” she adds.

About five years ago Boulder MoCA’s director, David Dadone, invited her to do a show. She wasn’t ready, though, and asked to take that time to realize “something really conceptually interesting.” The retrospective is called “coalescere,” which she explains is a Latin term that could mean both “bring together” and “grow up.”

“And I do feel like I keep growing,” she says.

Russo was in no way destined for a career in art. As a teenager she was a field-hockey star, who was courted by several colleges to accept four-year all-expenses-paid athletic scholarships. But none really stressed the importance of getting an education. She ended up at Princeton, where the primary emphasis was on learning, but nonetheless she took a break from academe to train for the 1984 Olympics as part of the field-hockey team. During practice, though, she hurt her knee so badly that it dashed all hopes of ever going to the games.

She took time off to have surgery and go through rehab, and then got a job as a waitress in an Italian restaurant in New Haven. The owners, noticing the deep sadness she seemed to carry all the time, advised her to go to the “mother country”—Italy—and visit the places where her ancestors had lived. She found a study-abroad program and for five months immersed herself in art history and Italian; she also apprenticed with a stone carver, a fabric artist, and a jewelry maker. “I was hooked,” she says. “Art seemed endlessly cool.”

Back at Princeton, she resumed courses for her major in developmental biology and psychology, but also signed up for ceramics classes with Toshiko Takaezu, a Japanese-American artist renowned for stoneware pots that were small enough to fit in your hand or as tall as six feet. “Basically art became my new sport. I loved the physical challenge of the clay, working on the wheel, developing the hand-eye coordination. And then I felt good at the end of the day because I would be physically tired.”

Russo had thought of becoming a doctor or a psychologist, but after graduation had no desire to go to grad school right away. For three years, she taught ceramics, biology, and geography at a private high school in Boston. Then Princeton called to hire her to coach the field-hockey team. She made a deal with Takaezu to work as a part-time assistant in exchange for studio space.

Fast-forward a few years and Russo married Joe Ryan, an environmental engineer and an expert in fracking, and the two moved to Boulder, where she entered the MFA program in the fall of 1993. “I was petrified,” she recalls. “Everybody had all this fancy art talk, and I knew nothing. Basically I just liked to be in my studio. I started thinking, What is it that really makes me feel stuff in my gut? It’s all connected with the autonomic nervous system. I made a whole group of pieces with gut-like forms.”

As her work evolved, Russo also found inspiration in the plant world. Phagocytosis, a nubbly sculpture that hugs the floor in the front gallery of her show,  is inspired by the lumpish swellings trees develop when something disrupts their growth—lightning or disease, for example. “The bulge is a remnant of the sickness,” she says. “It’s the ugly thing that saves it. To me it is oddly disturbing and beautiful at the same time.”

Looking back on two decades of work, Russo can see how it all ties up with her earlier education and experiences: a fascination with biology and anatomy, motherhood (she has two teenage children) and the volleying between the realms of the masculine and the feminine. And even field hockey. “You train to do a show, and then you let it rip. Intuitively on the field, that’s also how you work, and it’s only the people that are really gutsy who make the team. You can’t think too much, you can’t let anything bug you.” Russo says she’s always had a very disciplined approach, whether it’s sports or making art. “The more disciplined you are, the more freedom you get later.” 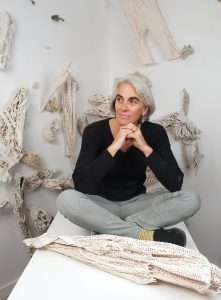 Martha Russo’s retrospective “coalescere” is up through June 12, 2016, at the Boulder Museum of Contemporary Art in Boulder, CO. She will be part of the show “Colorado Women in Abstraction” at the Center for Visual Art, Metropolitan State University of Denver. More about her work can be found at http://martharussostudio.com/

Photo credit. Top: gallery view at Boulder MoCA: nomos (2016) is along the curving wall; yon (2009) is at right. Slide show: Jeff Wells is the photographer for klynge, nomos, and drop; Wes Magyar photographed trickle and yon.