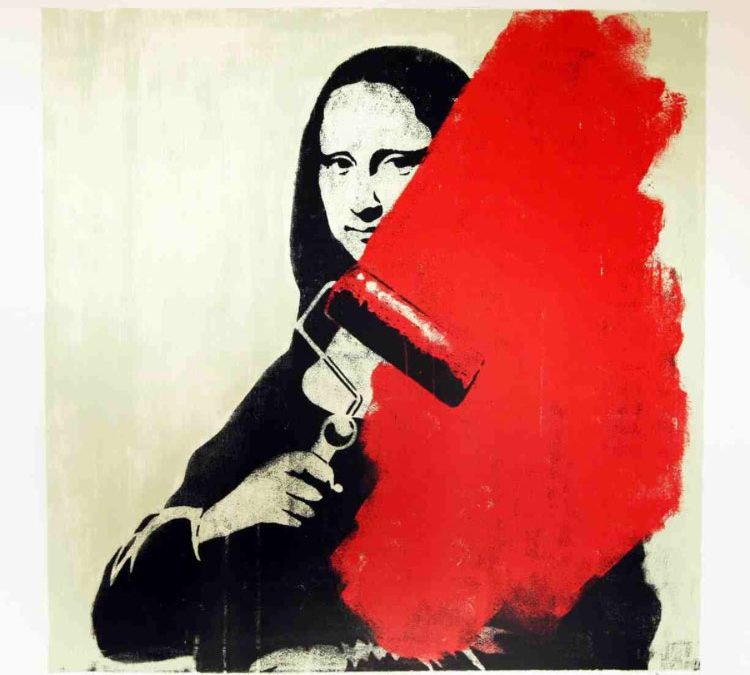 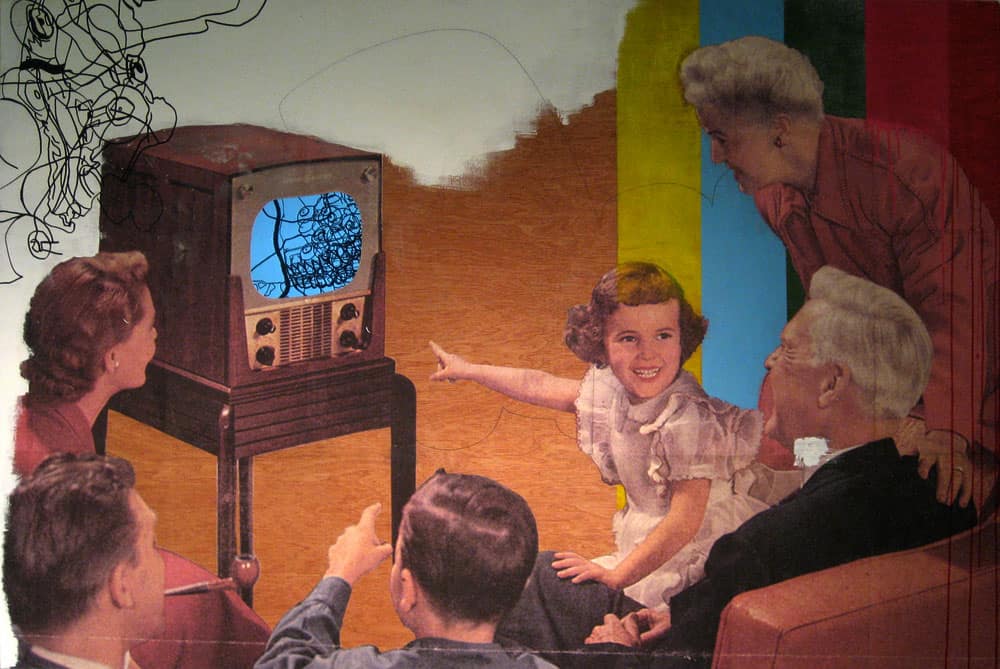 Laura Vranes’ interests as a future collector were established early. “As a child, I went to a museum in New York,” she says. “I wish I could recall which it was, but I remember how much I loved the Andy Warhol Brillo Box in the collection. I wanted to sit on it so badly. That has always stuck with me.” As did the graffiti she encountered on the streets of the city in the mid-1970s, when the art form became so prolific it seemed every subway car was covered with layers of spray-painted scribbles and graphics.

When Vranes and her husband, John McIntyre, decided to begin collecting, they gravitated instinctively toward street art because, as Vranes says, it’s a mix between graffiti and Pop but with a political or social twist. “Pop art was just too expensive, but street art was within our means.” 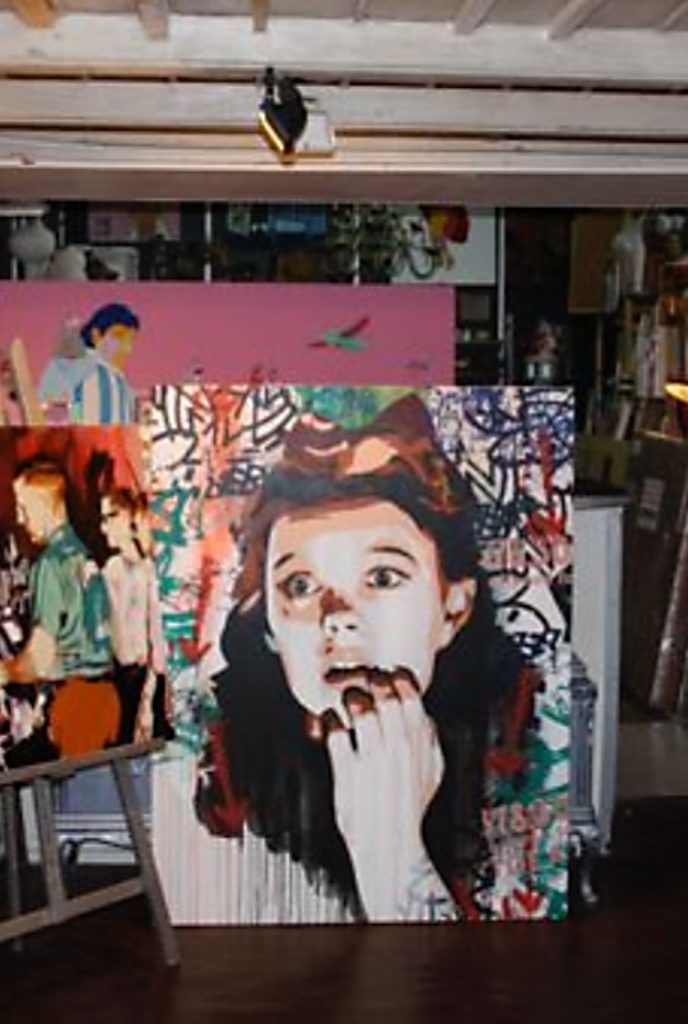 Their first purchase in 2008, though, was from an offbeat contemporary artist named Phillip Faulkner. The work is from his “American Still Life” series, and is a mixed-media tableau on wood that shows three generations of a stereotypical 1950s family in rapt amazement at a television whose screen has a live video streaming a nest of abstract scribbles.

From there they expanded to street art (Vranes estimates that 80 percent of the collection falls into that category). Among people they have been following is PolarBear, a Parisian artist who makes works on items rescued from the trash, like Formica tables and planks of wood (he also plasters provocative images directly on to walls, such as a spooky likeness of a girl pointing a revolver at the viewer). They own prints by Mr. Brainwash, the Los Angeles-based artist who appears in Banksy’s movie Exit Through the Gift Shop (some have speculated that Mr. Brainwash may even be an elaborate prank staged by Banksy). His mash-ups of contemporary icons pair Warhol’s “Marilyn” silkscreen with, among others, Michael Jackson, Barack Obama, and Johnny Depp. Another favorite is Andrea Michaelson, an artist who works with the collective Btoy in Barcelona and has a penchant for glamorous female icons from earlier eras, like Judy Garland, Frida Kahlo, and Liz Taylor. Vranes and McIntyre tend not to gravitate to big-name street artists, but they do own one unsigned Banksy called Trolleys, an image of a trio of shopping carts under siege by natives in loin cloths wielding spears and tomahawks. 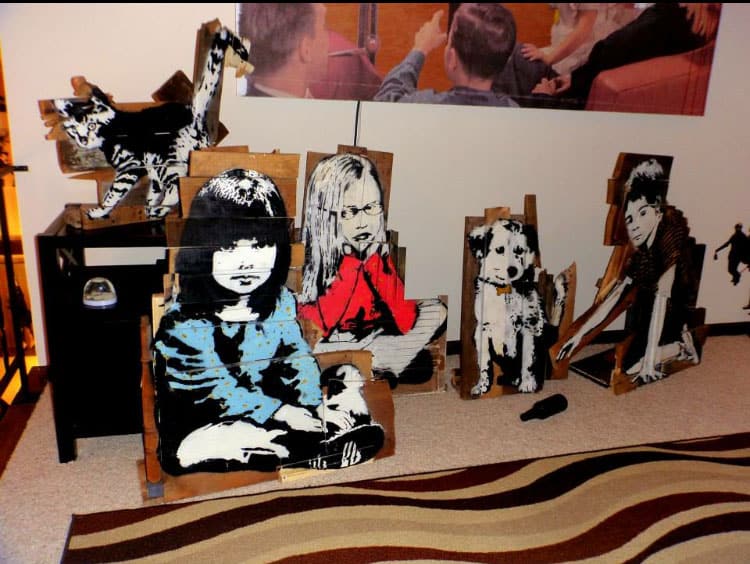 Vranes, who is a Catholic-school librarian, and McIntyre, a loss-prevention specialist, are both Nebraska-born and raised (Vranes says her family “appreciated art, but they also loved their football”). They now own some 500 pieces, almost all of them on display in a 3,200-square-foot house. Vranes says they tend to research an artist in depth, buying several examples of his or her work, before moving on to other acquisitions. Neither has an academic background in art, but they are avid readers of just about every art-centered publication and Internet site—Art in America, Modern Painters, Artnet, Artinfo, and so on. Several of their picks have been enormously prescient: “Because of how popular street art has become,” says Vranes, “Some of the pieces we have bought we could not buy today. We have been priced out.” 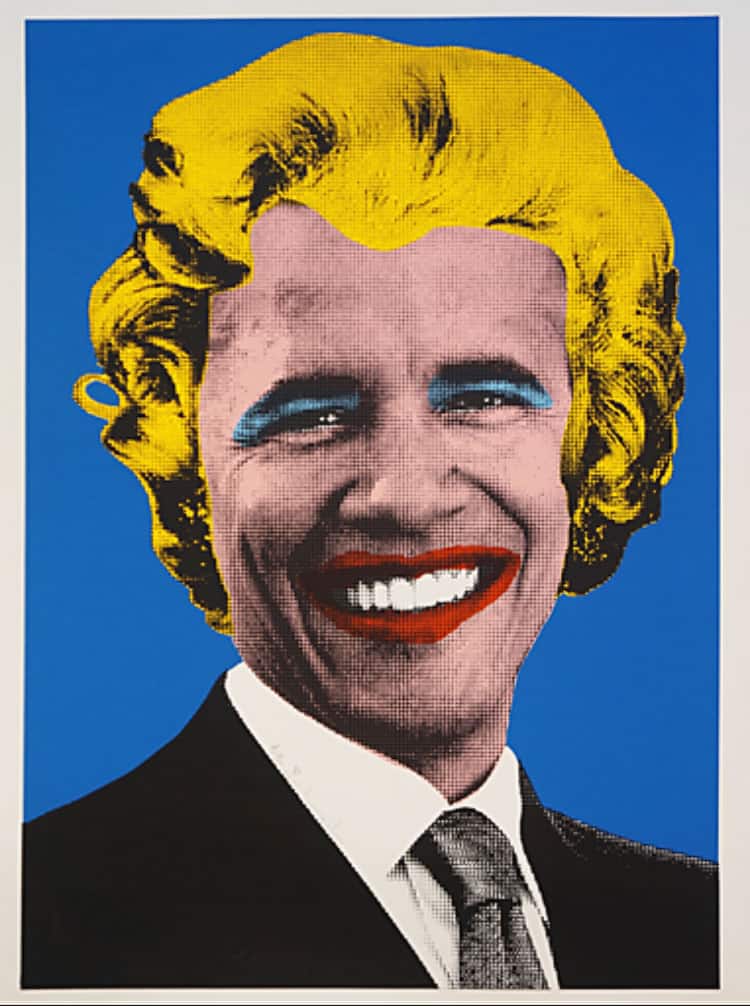 And though they generally buy directly from artists, Vranes and McIntyre are active within the Omaha gallery and visual-arts culture, and have indeed taken the initiative on several fronts. Artists often stay with the couple when they’re visiting the city, which has a more sophisticated scene than outsiders might imagine. There are several ambitious galleries, along with the Bemis Center for Contemporary Art, a multi-use warehouse space that sponsors residencies, cutting-edge shows, lectures, auctions, and other events. Another endeavor known as the Darger HQ creates collaborations among national and international artists, awards fellowships and stipends, and, according to its website, commissions “innovative projects that would otherwise be unrealized.”

On their own, the couple has launched Adopt Art Omaha and invited artists and others to create “original” works on a template based on the Vranes-McIntyre family dog, who not too surprisingly goes by the name of Banksy. They will also soon be playing host to members of the Kansas City Art Institute, who are heading to town to see the collection (“They had a choice between going to Miami Basel and visiting Omaha,” says Vranes, “and they decided they’d rather come here.”). 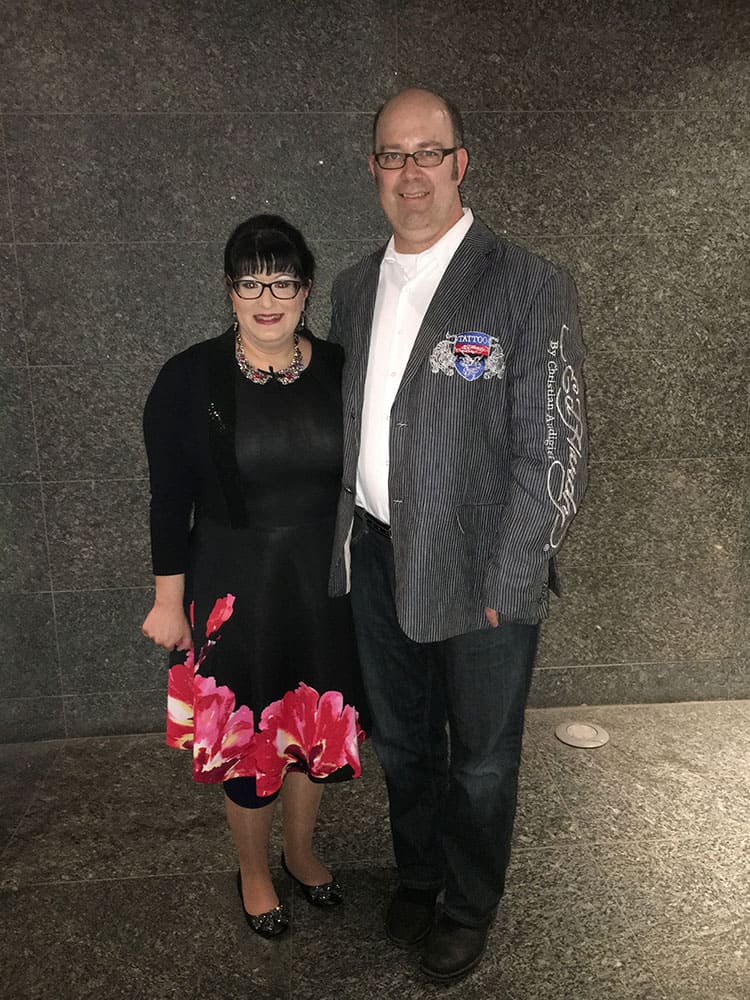 “We have so much fun collecting and going to art shows,” says Vranes. “Not only do we go to different art events, we try to push the envelope here in Omaha. The two of us seem to agree in all aspects of art and design, and we love the social aspect of what art can do. We share that bond and we would not trade it for the world.”