How to Be an Art Star 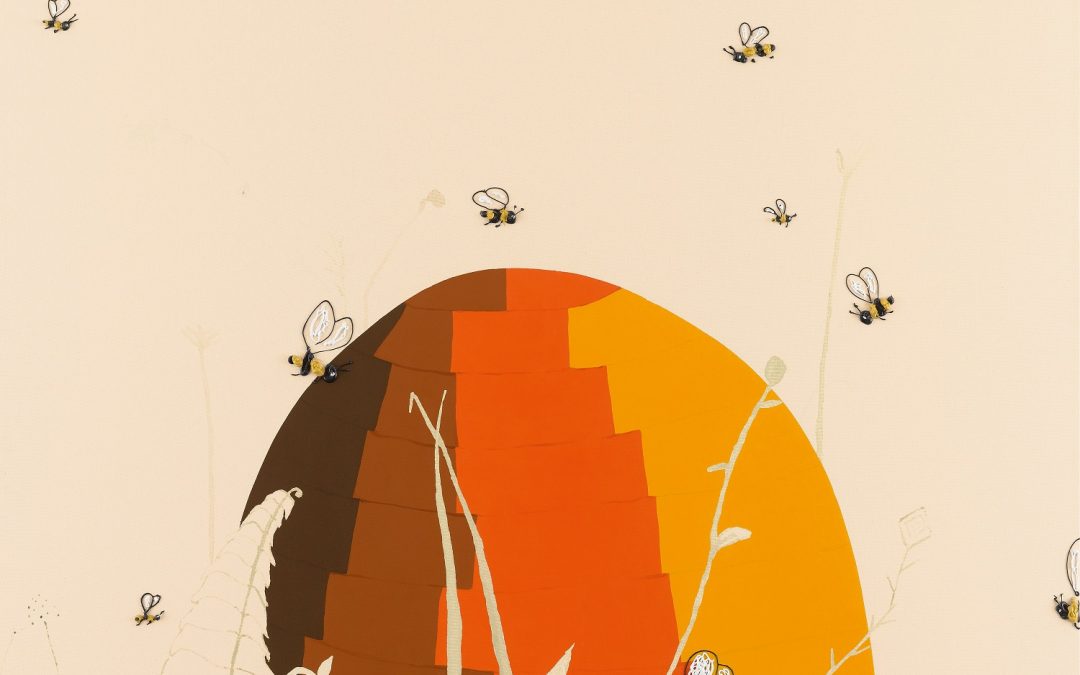 “Art star.” It’s a deplorable term, I know, but it’s out there as a label to describe those who have achieved a shining spot in the galaxy, commanding huge sums at auction, getting the nod from major critics, entering top-tier museum and private collections, and perhaps enjoying recognition in the glossies—publications like Vanity Fair or Vogue, which generally don’t pay much attention to artists unless money and glamour are involved.

Back in the late 1970s, when I was studying art history in grad school, a cluster of living art stars had already entered the canon. The art world was a much smaller place in those days, as crusty long-time observers repeatedly remind people. It was specific to New York and ruled by a handful of critics—Clement Greenberg (whose hegemony was fast waning) and his disciples, like Rosalind Krauss and Michael Fried. Barbara Rose and Hilton Kramer held forth at opposite poles of the spectrum, and the eminent art historian Leo Steinberg occasionally weighed in. By then, Donald Judd had also made his mark, both as an artist and art pundit writing regularly for Artforum, then the leading mouthpiece and arbiter of the contemporary scene. 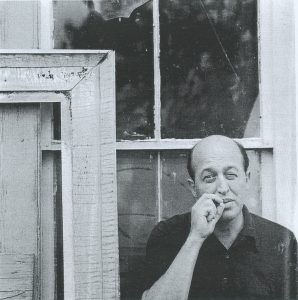 I dutifully read criticism by all of them, for one seminar or another, and the artists they championed were already included in surveys of modern art (“postmodernism” had not yet entered the lexicon). You could tick them off easily on two hands: Frankenthaler, Stella, Motherwell, Johns, Rauschenberg, Noland, Oldenburg, Dine, Warhol, Kelly, Land Artists like De Maria and Smithson, and perhaps a few of the Minimalists). The central reasons they were held in high esteem were simple: they were all rule breakers, in one way or another, or they fit neatly into the Greenbergian formula of the forward march of Modernism. (The many excellent West Coast artists, with the exception of Richard Diebenkorn, at that point scarcely registered on anyone’s mattering map.)

I was not particularly hooked into the art-world zeitgeist during the ‘80s, having decided employment in the academic or museum worlds seemed beyond my grasp, and so I tested out my wings elsewhere as an editor and writer. But anyone who lived in New York in that decade was at least peripherally aware of the East Village scene, which included Eric Fischl and Julian Schnabel, and the members of the Pictures Generation—Barbara Kruger, David Salle, Cindy Sherman, John Baldessari, etc. etc. And poor doomed Jean-Michel Basquiat, whose trajectory through squalor and celebrity were ready-made for a biopic (which Schnabel would later realize to stunning effect.) That was the last time that I remember movements acquiring specific labels—NeoGeo, Neo-Expressionism, Appropriation Art (and of course Feminist Art had sounded a steady counter beat to all the macho antics since the ‘70s). It was a decade when, as Jed Perl noted a few years back, “the helium-balloon exuberance of… Warholism and Reaganomics joined forces to create the lunatic asylum the art world is today.” 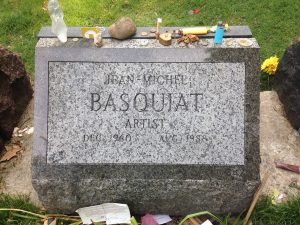 Dying young may have been a good career move

By the time I got to ARTnews in 1994 and started seriously reporting and reviewing, the art world had exploded exponentially. There was now more interest on a global scale, and the canon expanded to include things like Queer Theory, video art, performance, the art of minorities, and contemporary art in once largely overlooked parts of the globe, like China and Africa. Money and marketing entered the equation in an ever more serious way, and the path to art stardom for jokesters like Jeff Koons and Damien Hirst was greased by sophisticated (and I would say cynical) manipulation and big bucks from big collectors. Still, the artists I wrote about and reviewed in my 20-year affiliation with the magazine—people like Tony Oursler, Nick Cave, Lynda Benglis, Nam June Paik, Nari Ward, William Eggleston, and many others—were in one way or another all rule breakers, bringing something new to their chosen disciplines or in some way breaking fresh ground entirely.

You might ask, nonetheless, what is the peculiar chemistry that catapults an artist into the pantheon? “Name” collectors, “power” curators, and rave reviews from major critics all help. And then there are the behind-the-scenes machinations that most of us will never hear about (I believe it was Perl who suggested that since many of the MoMA board members collected Cindy Sherman, it made perfect economic sense to give her a retrospective. What better way to protect your investment?) 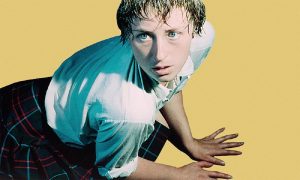 All of which brings me to the Laura Owens retrospective at the Whitney Museum of American Art, a two-floor exhibition I wandered through with increasingly dismayed eyes on my last trip to the East Coast in late January. A couple of weeks in advance of the opening, Peter Schjeldahl wrote an admiring profile of the artist in The New Yorker. I’d never heard of Laura Owens, which may demonstrate how appallingly out of the loop I am these days. But it made me curious enough to want to visit.

Owens is a 47-year-old painter based in Los Angeles. The subjects of her jumbo-sized canvases, some of them pushing 10 or 12 feet on the longest dimension, include a swarm of cartoony bees buzzing around a hump-shaped hive (top), real rubber tires affixed to a lavender and pink ground, a man whose head has become a lemonade juicer, and a white horse that seems lifted from a sappy calendar or a children’s book, barely constrained within its huge frame. But the real head-scratcher looked to be taken from sort of inspirational greeting card you might have gotten in the fifth grade from a well-intentioned aunt: it shows a boy and a dog dangling from a rope, accompanied by the words: “When you come to the end of your rope, you make a knot, and hang on.” Huh? What was the fuss about? 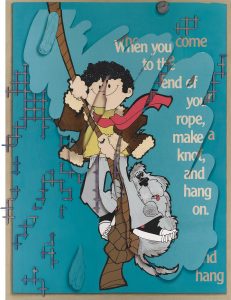 To be honest I liked many of the paintings that combined mostly abstract elements in ways that vibrated with graphic and coloristic exuberance: big fields of writhing loops and squiggles, set against grids, printed wallpaper, and swaths of gingham. But I wondered at the point of riffing on a Toulouse-Lautrec painting of two prostitutes in bed, which in turn, I later learned, was borrowed from a contemporary fin-de-siècle cartoon (maybe this is appropriation of appropriation art, or post-appropriation art). And I failed to see the wit or innovation of basing five free-standing panels on a story written by the artist’s young son, which are readable only when the viewer stands in the right place. 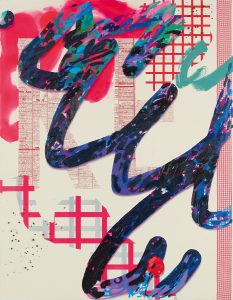 So when I got home I turned to a few critics, who were almost unanimous in their praise of the show. In a lengthy paean in The New York Review of Books, David Salle applauded Owens’s “continuous run of invention and forward-thinking bravado” and her “superior pictorial instincts,” calling the show “the apotheosis of painting in the digital age.” Roberta Smith in The New York Times called it “a smart, beautiful show [that] bodes well for painting.” And Phyllis Tuchman in ARTnews online hailed the retrospective as “a game changer.”

The lone dissenting voice among the reviews I tracked down was John Yau’s in Hyperallergic, who remarked: “What is striking about the works in this exhibition is how completely sterile, mainstream, and middlebrow they feel, with just enough insider info to flatter the viewer who knows something about Roland Barthes.”

Does the general consensus make Owens an “art star”? Yau none-too-happily concedes this may be so: “Critics, curators, and collectors concur. This exhibition is the official anointing of an American genius.”

And yet anyone who has paid attention to the art world of the past 20 to 30 years knows that many have been anointed and few have had real staying power, not because the quality of their work has declined (I’m sure those who made waves years ago are still working, perhaps at the top of their game) but because the art audience is fickle: collectors move on, curators change venues, the press requires fresh talent to celebrate or eviscerate.

After seeing and reading about a show like the Owens retrospective, I’m glad I’m out here in the boonies, patiently cultivating my own garden of artist members, who continually surprise me with the strength of their convictions and the ingenuity of their highly personal visions. And almost never, ever make me gag.